The keys offer a good amount of travel and allow for quick typing, but they’re a touch small. The all-important Enter button has been shrunk down to such an extent that it’s difficult not to mistakenly hit the hash key (#) every time you want to create a new paragraph, which is very irritating — I’ve had this problem at least seven times while writing this review.

The cheap-feeling trackpad doesn’t feel anywhere near as nice to use. The slightest touch causes a small depression and an annoying tapping sound. While you’ll have no problems clicking, it’s not great for scrolling, and you’ll find yourself growing irritated when many of your two-finger swipes don’t register. We found ourselves using the touchscreen a lot more often than the trackpad, which is mainly down to our general dislike of the latter. 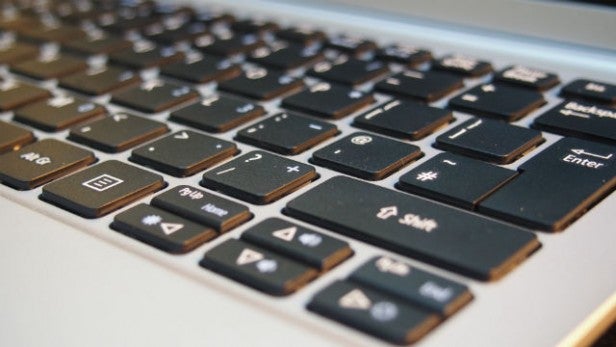 Also, a touch too much real estate is attributed to the right-click function – pressing down on the centre of the trackpad brings up a ‘right click’ menu, so you’ll have to force yourself to stick strictly to the left side if you want to left-click something. To add to the confusion, the entire width of the top-edge of the trackpad – the side closest to the keyboard – delivers the left-click option.

Powering this hybrid machine is a quad-core Intel Atom Z3745 processor clocked at 1.33GHz, paired with 2GB of RAM. At just £325, this isn’t a computer targeted at the top or even middle areas of the market. It’s a budget device built for casual use, and the performance it delivers reflects this.

It scored 2555 in our Geekbench 3 benchmark test, unsurprisingly ranking it between the £299 Asus Transformer Book T100, which is a smidgen slower, and the £499 Toshiba Satellite L30W-B-10D, which is about 10% quicker.

Boot speed isn’t unbearable, with it taking just under a minute for you to get to the desktop after switching it on. Impressively, even hours of heavy use (maximum volume, full brightness, lots of video) don’t seem to bother the computer much, with it giving off just a little heat after hitting it with an entire evening of YouTube, Facebook and BBC Sport. Like plenty of other Atom-powered devices, the Switch doesn’t have a fan, so you won’t be plagued by that familiar, unwanted whirring noise.  You’ll see the computer get a little laggy if you choose not to shut it down overnight, with a just-noticeable delay the following day between hitting keys and the characters appearing on the screen. 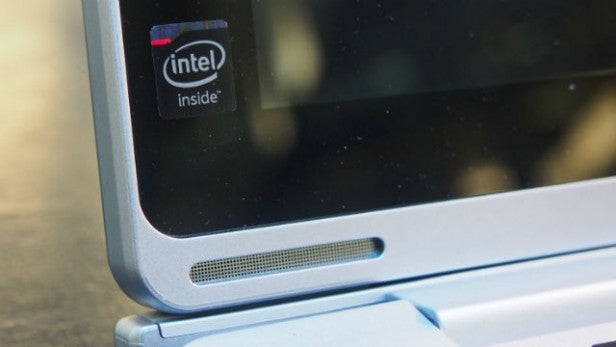 Unfortunately, the Switch 11 comes out of the box with a fair bit of bloatware from the likes of Acer, McAfee and LoveFilm that tuck into the standard 32GB of storage, but this is pretty straightforward to uninstall.

In the PowerMark benchmark, which simulates a mix of web browsing, video playback and productivity, it scored seven hours and 27 minutes, which is impressive considering this only packs a single three-cell Lithium Polymer battery. Usually, we set the screen to 40% brightness for this test, but considering the Aspire Switch 11’s display is a duller-than-average offering, we went for the top setting, since we feel this is the likeliest to be used by owners.

This number reflects what we found in real-life use, too. With 10 tabs open on Chrome – one of which was a YouTube playlist playing at maximum volume – the screen set to maximum brightness and Skype running in the background, the full battery took just over seven hours to drain down to 5%. Not only did the Switch 11 handle this workload well, but seven hours of life is a decent result.

It’s a damn slow charger, though. Charging the Switch for 30 minutes took it up to a measly 14%, which will keep you going for only 60 minutes or so. 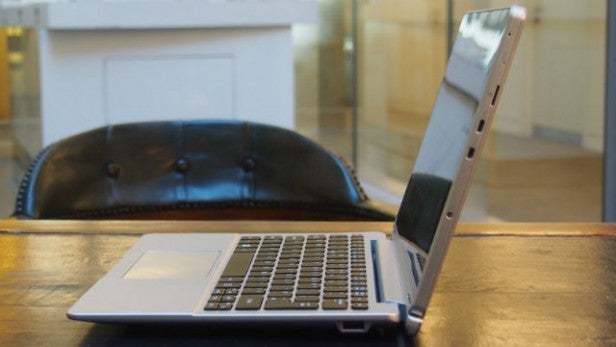 Should I buy the Acer Aspire Switch 11?

It’s worth considering if you’re in the market for a cheap, versatile machine that lets you casually browse the web and watch TV shows and movies without issue. As hybrids go, it’s relatively unremarkable, but the multi-mode hinge is a killer feature lacking in similarly priced and even more expensive models, and battery life is good.

It has several drawbacks, though, which you’ll need to consider before buying. Budget-restricted gamers and professionals should look elsewhere, since its processing power, screen and speakers aren’t quite up to scratch. Its clunky design isn’t going to please the fashion-conscious, either.

However, in terms of sheer value for money, the Switch 11 is worth a shot. The £350 Asus Transformer Book T200TA is quicker and boasts a better touchpad, but the Asus Aspire Switch 11 has a superior screen and keyboard.

From £330, this is a reasonable, wallet-friendly two-in-one device for students and low-tech consumers, just so long as you can live with the touchpad.