Acer is no stranger to producing desirable Ultrabooks. The Aspire S5 was a great, if flawed, piece of design. It was incredibly slim but its rear connectivity was awkward and its keyboard wasn’t backlit. But what really let it down was its low quality TN screen. Well, these niggles are a thing of the past for Acer’s new flagship ultraportable laptop: the Aspire S7. 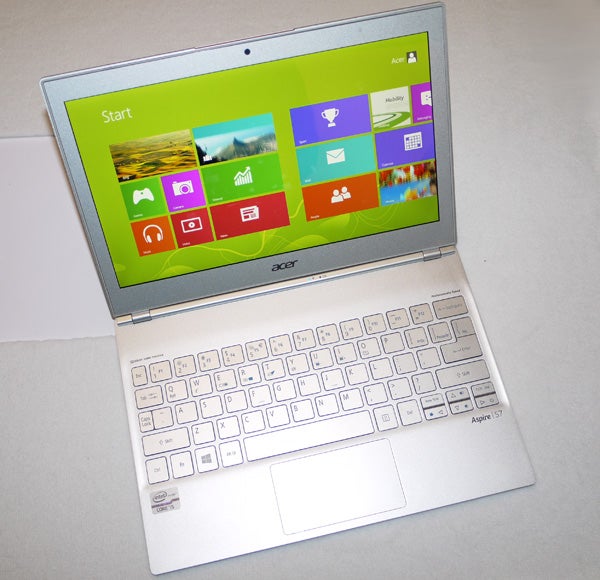 The S7 comes in two versions: there’s the 13.3-inch Aspire S7-391, a 1.3kg laptop with a white Gorilla glass lid reminiscent of the HP Envy Spectre; and the metal-lidded 11.6-inch Acer Aspire S7-191 we’re looking at today, which comes in at just 1kg. Both of these premium Windows 8 Ultrabooks sport stunning designs, Full HD IPS touch screens, backlit keyboards and impressive specs. Oh, and they’re being promoted by Megan Fox; the dolphins get our vote though.

Unlike the S5, which was merely good-looking, the S7 is a stunning bit of kit with an aesthetic all its own. It sports a unique mix of curves and squared-off edges that help it stand out in the Ultrabook crowd, and the 11-inch model is so slim at 11.9mm that it could well take the ‘slimmest Ultrabook’ crown, while its footprint fits in an A4 page. 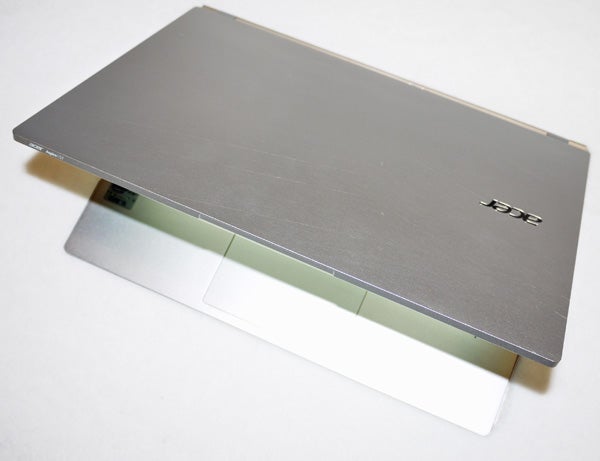 The brushed aluminium lid makes a chunky, solid impression despite its slimness, and sports an attractive crosshatch pattern that again sets it apart. It doesn’t pick up fingerprints and mild scratches might easily get lost in those lines.

The keyboard surround is also metal and feels equally solid. The laptop’s base is white plastic but this doesn’t detract much from the look or feel, and helps to keep weight down to that very nice 1.04kg level. All in then, the Aspire S7 easily rivals the best of the rest thanks to its combination of low weight, slim lines, great feel and stylish finish.

As far as ultra-slim 11-inch laptops go, the Aspire S7 offers a generous port selection. On the left you’ll find power and USB 3.0, the right houses a microSD card reader, headphone jack and second USB 3.0 port, while the back hosts a microHDMI video output.

Considering that most 11-inch Ultrabooks omit an SD card reader altogether, we can happily live with the micro model Acer gives here. There’s no Ethernet jack but this can be achieved using a USB adapter. For wireless we have the usual Wi-Fi N and Bluetooth combo, with no word on a 3G/4G version.

The Acer Aspire S7 offers a reasonably good typing experience. Layout is pretty much spot-on with a comfy matt surface to the slightly soft keys, and the aqua LE backlighting is slightly more energy-efficient and cooler than traditional LED. However, while feedback is crisp enough, travel is a little too shallow for our liking. 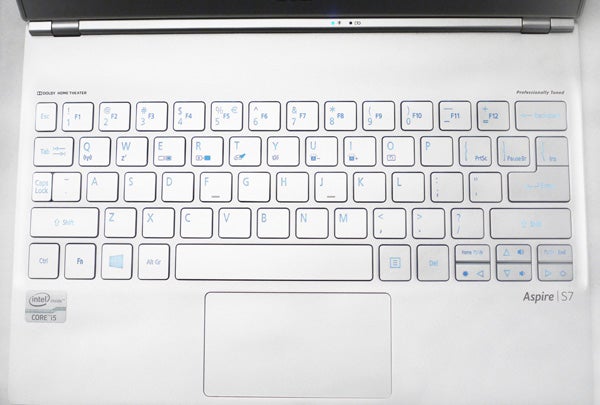 The single-surface, multi-touch trackpad is fully Windows 8 compliant and was responsive with a nice click to its ‘buttons’. Quite frankly, it was lovely to use.

Finally, Acer is putting high-quality screens on its premium Ultrabooks. And what screens: we’re talking about 1,920 x 1,080 resolution IPS panels, resulting in superb sharpness, excellent viewing angles, good contrast and punchy colours. Our only niggle was that in Windows 8’s ‘traditional’ desktop interface, fonts and buttons could be rather on the small side. 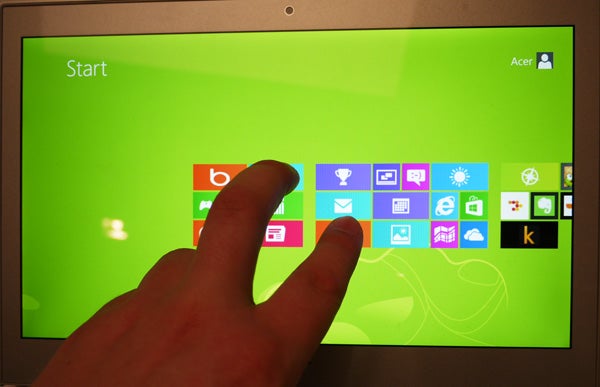 Despite our limited time with the S7 family, we can already tell that these are easily some of the best Ultrabook displays on the market, currently matched only by similar offerings from the Asus Zenbook Prime range. Mind you, we’re sure Samsung won’t be far behind.

As the Aspire S7 was designed with Windows 8 in mind, its display also supports 10-point touch, letting you browse at ease through the latest Microsoft OS with your fingers. This is really a requirement for any Windows 8 device, as the (s)Metro(/s) LiveTile interface requires touch to be any fun. 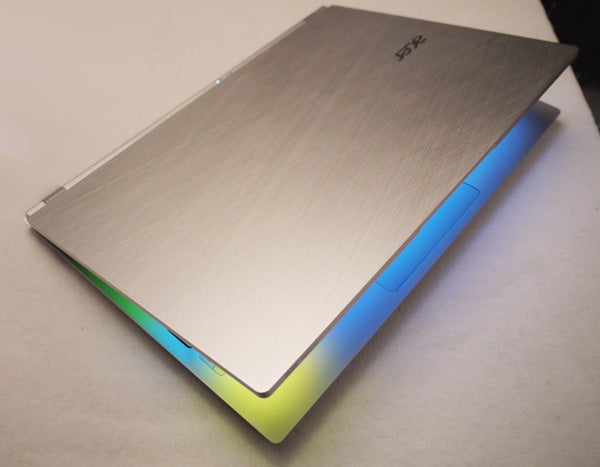 There are no surprises on the S7 specification front, as it’s typical high-end Ultrabook fare. A choice of Core i5 or i7 processors, 4GB of RAM, Intel’s HD 4000 graphics and 128GB or 256GB for storage make for a very competent machine that will happily chew through most things you might throw at it, barring recent 3D games. 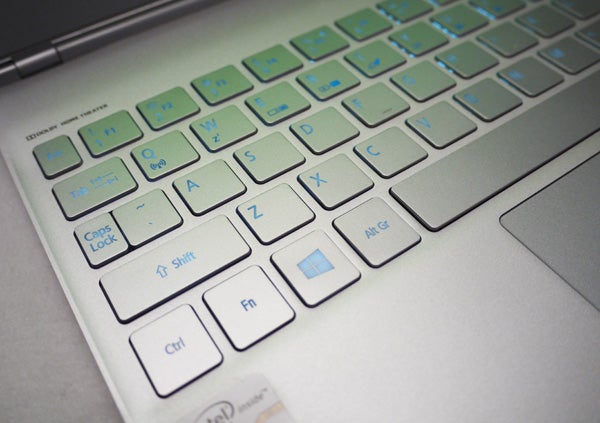 Acer claims the 11.6-inch Aspire S7’s battery should be good for up to five hours, which is either on the low side for this size of Ultrabook or a very realistic, truthful assessment, as it’s generally how long slim 11-inch ultraportables like this tend to last. 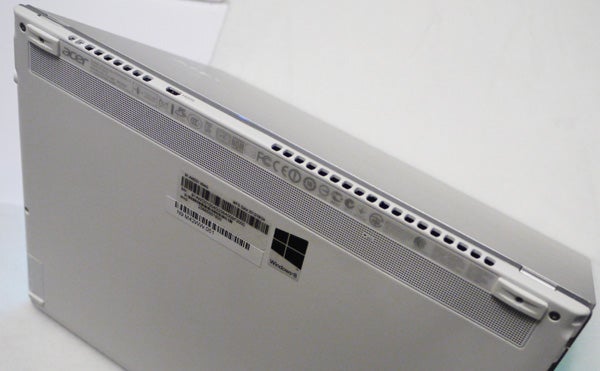 However, the Aspire S7 range definitely has an edge over much of the competition here, as Acer offers an optional battery slice that almost doubles this figure to 9.5hrs. Nice.

Though Acer said the 11-inch S7 would be available first in the UK, currently we’re only seeing the 13-inch model starting at £1,150 for a Core i5 with 128GB SSD. That’s a very reasonable price considering its stunning design and 1080p IPS touch screen, and it’s bound to go down over the coming months. 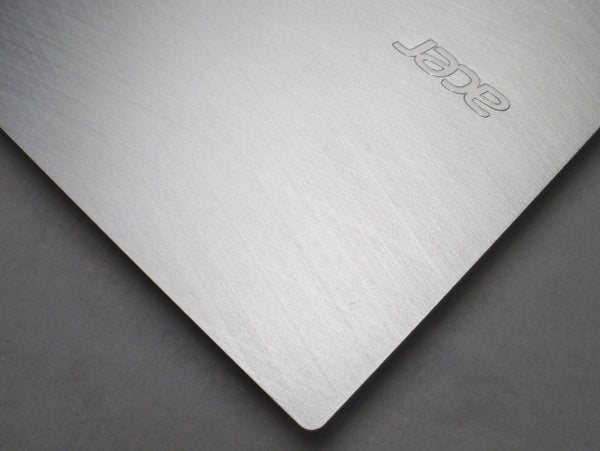 We couldn’t find any etailers stocking the 11.6-inch Acer Aspire S7-191, but expect its price to be below the £1,000 mark, which again would make it excellent value, especially compared to equivalent MacBook Air models which cost around the same but get you far inferior screens sans touch.

If Acer’s previous flagship Aspire S5 Ultrabook was a bit of a disappointment, the S7 more than makes up for it. Sporting glorious Full HD, touch-enabled IPS screens, super-slim profiles, original and striking designs, and even optional battery slices, these Ultrabooks appear to be truly worthy of their flagship status. We can’t wait to get them in for a full review.