Acer is frequently perceived as a value/budget brand, but that could change thanks to premium entrants like the Aspire S5 Ultrabook. It’s the slimmest 13-inch laptop in the world, which is no mean achievement in these days of ultra-thin entrants like the Toshiba Portege Z930 – incidentally the world’s lightest laptop.

But the S5 doesn’t rest on its lean laurels with this achievement alone. It’s also the first Ultrabook to offer Intel’s lightning-fast Thunderbolt connector (remember that the 13-inch MacBook Air is not, technically, an Ultrabook). This up-and-coming connection has oodles of potential, with enough bandwidth for everything from desktop-speed storage to game-worthy external graphics. Acer’s Ultrabook is also very light in its own right, at a mere 1.18kg. 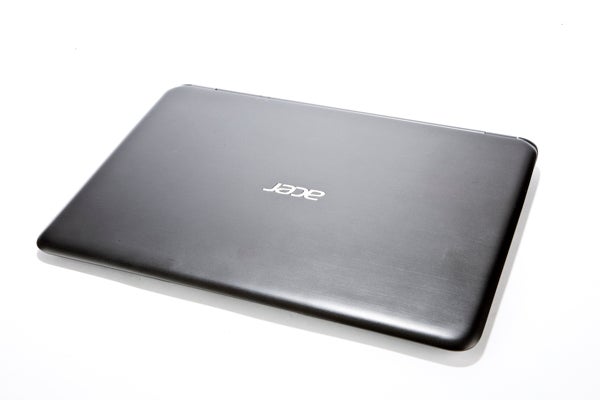 Design
The Acer Aspire S5 also looks rather good, with a sleek, black, brushed aluminium body and all its large ports hidden in a motorised door that retracts into the laptop to maintain its slinky profile. This ‘feature’, which Acer calls MagicFlip, is perhaps what most distinguishes the S5 from rivals, though we’re in two minds as to its practicality.

However, let’s not get ahead of ourselves. The Aspire S5’s lightly curving lid dominates the laptop’s base at the front and sides, while at the rear it’s slightly recessed to show the hinge. The sides and back are fairly clean, at least with the connectivity flap ‘raised’. 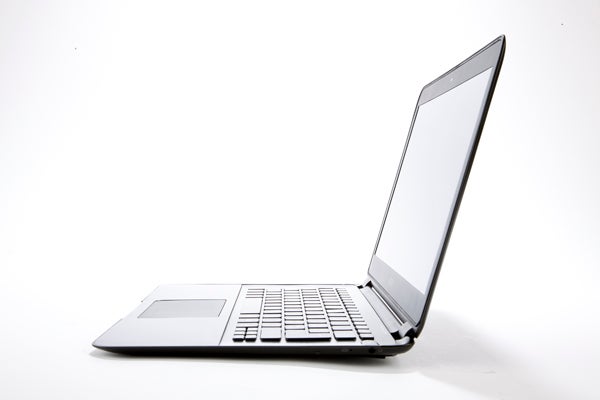 Unfortunately, the design isn’t quite minimalist or tight enough to match the mighty Samsung Series 9 900X3B or the aforementioned Apple ultraportable. However, compared to most other laptops it’s definitely up there.

Build
Build quality on the Acer Aspire S5 Ultrabook is very good. Again it doesn’t quite manage the brick-like solidity of its Series 9 and Air rivals, but it nevertheless feels sturdy all-round, with no creak and flex so minimal it’s negligible. All panels are neatly fitted with no gaps in the seams. 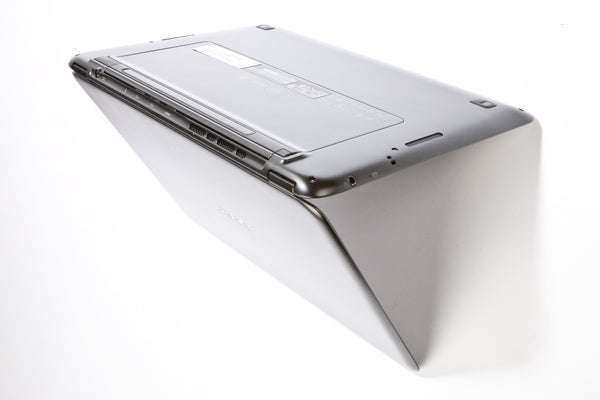 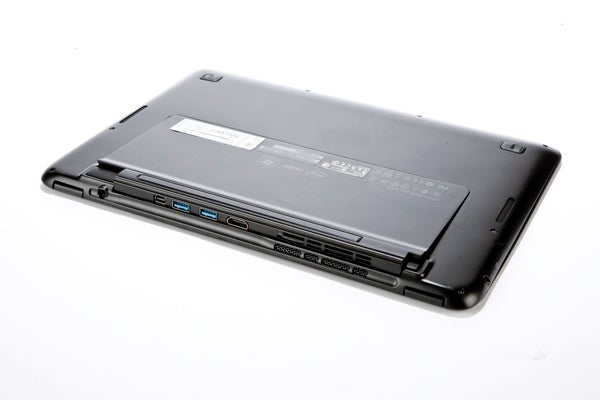 The obvious area of concern would be the MagicFlip retracting connectivity door, and specifically the motor powering it. It’s easy to assume that this is the S5’s weak point and might fail on you after a few hundred open/close actions, but we were told Acer has thoroughly tested the mechanism for thousands of actions.

Connectivity
Thanks to the addition of a Thunderbolt port, the Acer Aspire S5 is pretty much the best-connected Ultrabook on the market. In fact, it even beat’s Apple’s MacBook Air ultraportable thanks to the inclusion of a full-size HDMI port.

The laptop’s left side houses the SDXC card slot, while you’ll find a headphone jack to the right. Wireless consists of the usual Wi-Fi N plus Bluetooht 4.0 combo. 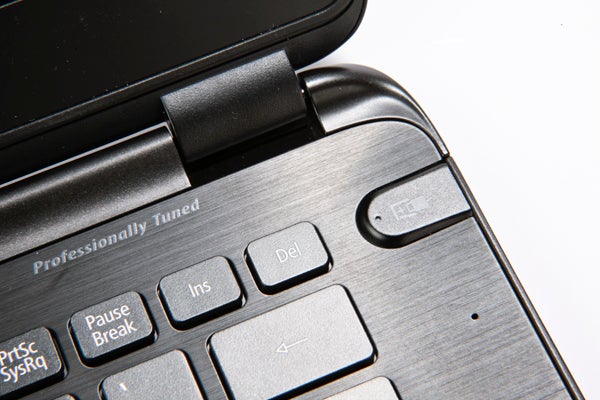 The MagicFlip rear connectivity door is controlled using a prominent, moulded button just above the keyboard. It slides out smoothly with a nice little mechanical whir that our geeky hearts can’t help but love. Once extended, it reveals a full-size HDMI port, twin USB 3 ports and of course the microDisplayPort connector that Thunderbolt uses. MagicFlip won’t close if cables or devices are plugged in. 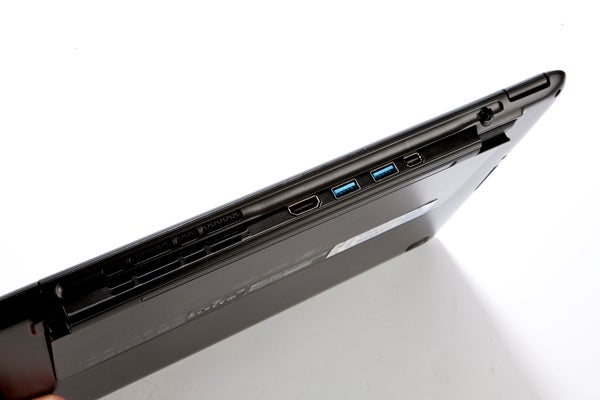 However, having most of the connectivity located at the back of a laptop is still a bad idea, just like it was on the Acer Aspire S3. It makes USB devices awkward to plug in and exposes them to possible damage when picking the laptop up or putting it down at a slight angle.

Keyboard
The typing experience offered by the Acer Aspire S5 is good overall, though there are a few downsides. On the bright side, the chiclet keys are well-spaced and offer more travel than your average Ultrabook, while layout is good if slightly quirky here and there. 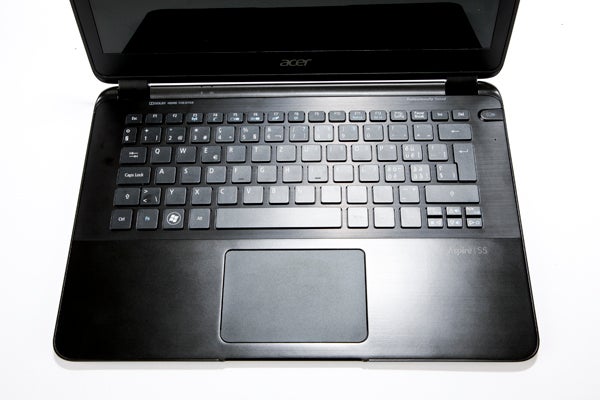 Downsides are that the smooth finish on the keys feels just a tad slippery, there’s an infinitesimal amount of flex when typing firmly, and there’s no backlighting – which we’ve come to expect on premium ultraportables.

Touchpad
The Aspire S5’s multi-touch touchpad is the usual large, button-free affair, and as nice to use as any. We’re glad to see the size has been increased over the Aspire S3’s rather small pad, but otherwise they’re virtually identical, offering a smooth, matt surface and nicely defined click. 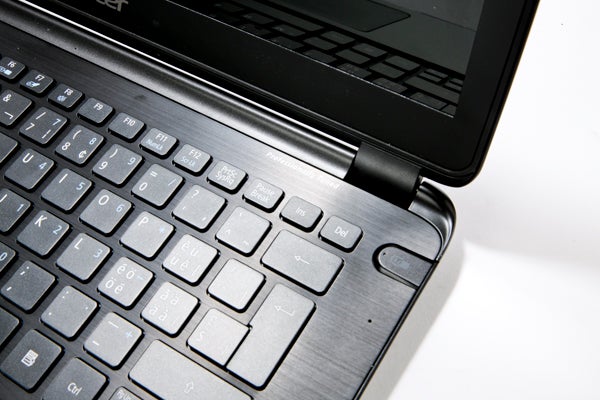 Screen
Unfortunately, despite its premium price and features, the Acer S5’s screen is your regular glossy 13.3-inch TN panel with a bog-standard 1,366 x 768 resolution – and it’s not the best of its kind either. While its bright colours, perfectly even backlighting and lack of light bleed is to be commended, a lack of subtle dark detailing and typically poor viewing angles let the side down. 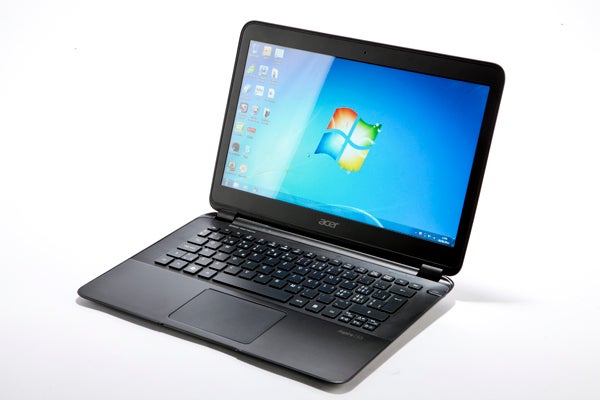 Really, this is very disappointing on a top of the range ultraportable. When you can get the Samsung Series 9 900X3B for only £100 more with its glorious 1,600 x 900, matt PLS display, we know which we would choose. Even the similarly-priced 13-inch MacBook Air with its 1,440 x 900 screen offers a higher resolution and far better viewing angles. Acer gives us a good 1,920 x 1,200 screen on one of its Android tablets, but not on its most premium Ultrabook? 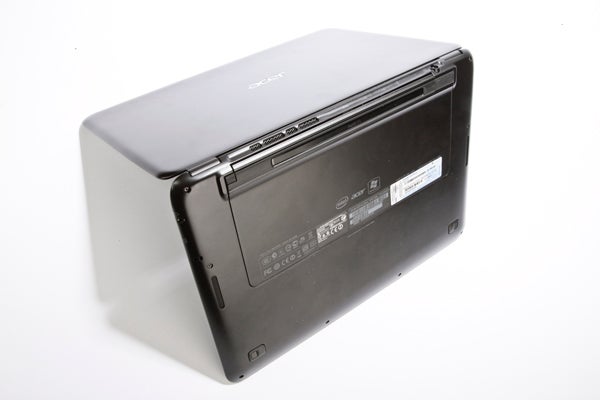 Speakers
Thankfully the Acer Aspire S5’s speakers are singularly impressive, easily matching the best of the other ultra-slim 13-inch laptops. Though they’re slightly down-facing, they still project a lot of body on your lap, and on a desk they add great clarity to the mix. They manage all this at good volumes without distortion too, and even bass is not completely tinny.

Specs and Performance
As with most second-gen Ultrabooks, the Acer Aspire S5 is available in several different configurations. There’s the ‘basic’ Core i5 model with a 128GB SSD, a Core i5 with a larger 256GB SSD, and the top end which sports a Core i7 CPU with that same 256GB SSD. All models share the S5-391 (NX.RYXEK.00X) identification. 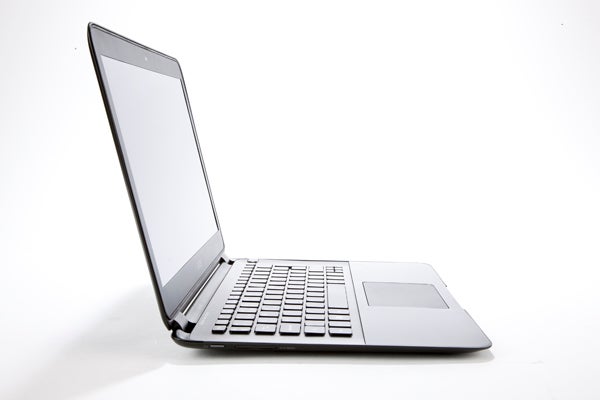 Our review sample is the S5-391 (NX.RYXEK.002) Core i5 with 256GB solid state storage version. The exact CPU in question is Intel’s dual-core ‘Sandy Bridge i5-3317U, which runs at 1.7GHz by default but can clock up to 2.6GHz and features support for up to four virtual cores. It will happily munch through intensive daily workloads.

It’s backed by the classic 4GB of RAM and the aforementioned spacious SSD, making it an all-round zippy system with near instant bootup. Graphics are of course handled by Intel’s integrated HD 4000 solution, which will just about let you play a few recent games if you’re willing to compromise.

Battery life
Considering what Acer has already managed to cram into the Aspire S5’s chassis we weren’t expecting awesome battery life, though the Toshiba Z930 is proof positive that it can be done. However, the S5 didn’t shame itself in our battery test, lasting five hours and 15 minutes away from a socket. That’s hardly the best result by Ultrabook standards, but most of the laptops that manage better are thicker and heavier. 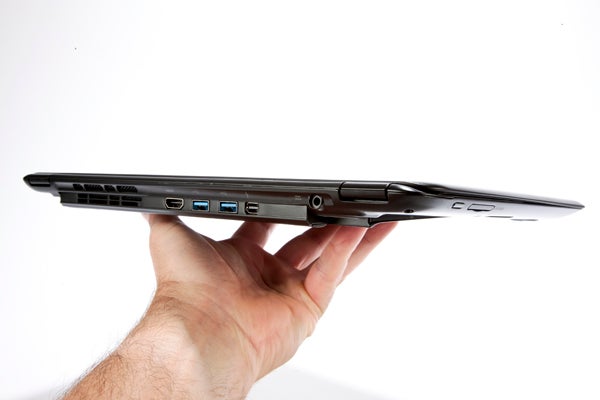 Value
With a bit of hunting around you can find the Acer Aspire S5 with a Core i5 CPU and 128GB SSD for just under £950. That’s not bad value for the thinnest Ultrabook going, especially factoring in niceties like its rare Thunderbolt connectivity.

However, the screen simply isn’t good enough at this price, and the connectivity is awkwardly placed even discounting the potential MagicFlip issues. On the topic of MagicFlip, much as it deserves kudos for innovation and appeals to our inner geek, it’s just a tad gimmicky. Other niggles like the lack of keyboard backlighting also leave us a little disappointed. 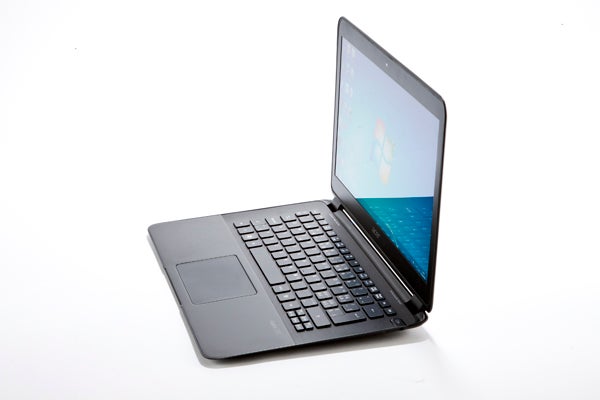 Samsung is currently offering £100 cashback on the Sandy Bridge revision of its Samsung Series 9 900X3B, making it the same price as the S5. For that money, you get a lighter, better-built, more attractive laptop with better ergonomics, a backlit keyboard, gigabit Ethernet, and a vastly superior screen. The only downside is the lack of Thunderbolt. 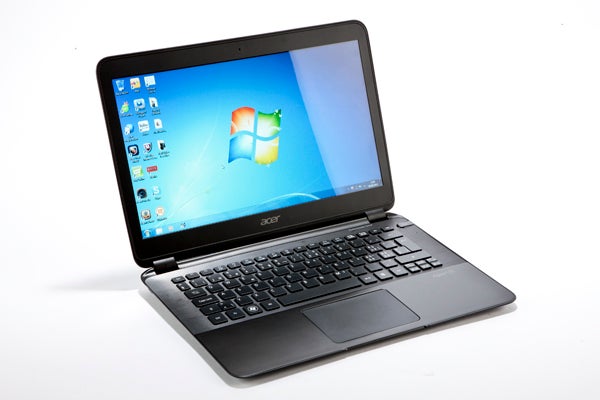 Acer has produced its best-looking laptop yet with the Aspire S5, and created one of the world’s thinnest 13in Ultrabooks while it’s at it. Premium touches like the (for now) rare inclusion of a Thunderbolt port also help to set it apart, especially since it and the rest of the S5’s connectivity are hidden in an innovative motorised door called MagicFlip.

Despite its geeky appeal, however, MagicFlip isn’t actually all that convenient, nor is having all the connections around the back. Worst of all, an average, glossy TN screen with a bog-standard 1,366 x 768 resolution really lets the side down. Throw in niggles like its lack of keyboard backlighting, and there are simply better premium ultraportable laptops on the market than the Acer Aspire S5 for its price.