Nettops haven’t seen the same level of publicity heaped upon netbooks. This is largely due to the fact that, when stripped down, most nettops literally are netbooks in disguise. Only dual-core Atom processors have really provided any meaningful differentiation between the two, but what we and others have been holding out for was nVidia’s much vaunted ION platform. And now we have what we wanted in the form of the first ION powered nettop, the Acer Aspire Revo.


Acer has clearly put a lot of thought into the Revo. This is evident from the rather fetching and intelligently designed chassis. Finished in glossy blue and white, its angular lines and sandcrawler-like shape lends the Revo a funky but not overly ostentatious appearance that’s very fitting. Little touches, like the smart corner mounted power button, only add to the overwhelmingly positive impression. 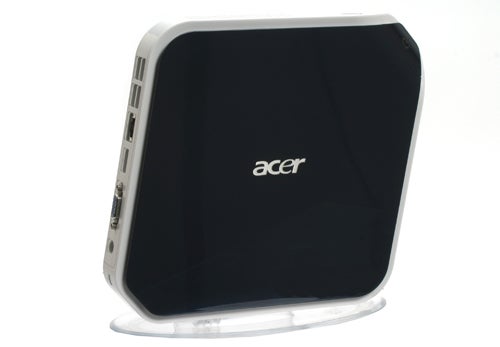 That’s not to say the Revo isn’t without one or two chinks. Take the provided plastic stand, for example, which leaves the unit woefully unstable – see the video for a better idea of what we mean. Thankfully, Acer also provides a VESA mounting kit with all Revos, so you can attach the unit to the back of a TV or monitor. Given it measures just 180mm square and weighs just 750 grams, the Revo is ideally suited to such a situation. Moreover, as you can see from the diagram below, the connections are arranged in such a way to enhance this configuration. 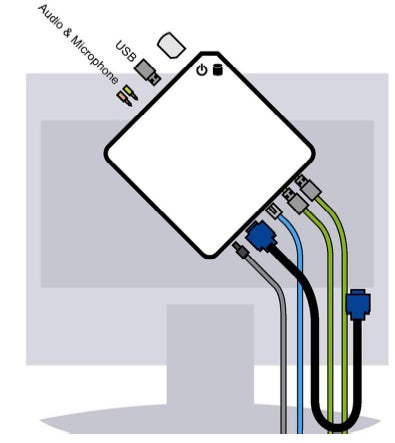 Speaking of which, there’s no shortage of options on the Revo. Starting at the front there’s an eSATA port, headphone and microphone jacks, and a memory card reader. Then on the corner and at the top there are two USB ports. There are a further four USB ports on the back and these are joined by an Ethernet port, HDMI, VGA and the power input. There’s also a lock slot should you need it.


In the box, meanwhile, you get a wired keyboard and mouse – though regrettably our engineering sample didn’t come with these, so we’re unable to tell you much about them. If you purchase the top of the range model you also get the heavily publicised Wii Remote style controller, though this strikes us as more gimmicky than useful given the system’s limited gaming credentials. 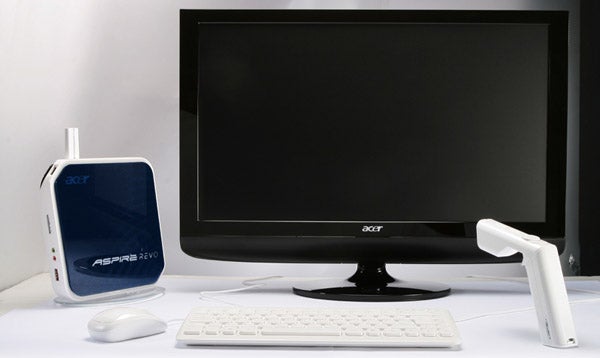 Thus we’d recommend you opt for the model we’re reviewing, the R3600. This is already retailing for as little as £244.99 online and while there’s a stripped down Linux version, the 3600L, that’s available for £162.75, it has just 1GB of RAM and only 8GB solid state storage, making it a very basic offering.

Since we’ve touched upon specs, we should complete the picture. All the systems come with an Intel Atom 230 CPU. This is the single-core version (the 330 being dual-core) and it runs at the obligatory 1.6GHz. In the R3600 you also get 2GB of RAM, though a portion is used by the integrated graphics, leaving you with 1.7GB to play with. Storage isn’t prolific, with just 160GB on offer, but it’s more than enough for most needs and could be easily supplemented. Vitally, though, you get Draft-N Wi-Fi and wired Ethernet, so the networking bases are fully covered.
(image:img0205s)

This just leaves nVidia’s ION platform, the key component of which is the 9400M graphics chip – that seen in the new Apple MacBooks. This brings with it the vital feature of hardware video decoding support, making it possible to playback 1080p h.264, MPEG-4 and VC-1 encoded video. In our testing, performance was flawless. HD film trailers, encoded in h.264 with stereo audio, all played back with no dropped frames, with CPU utilisation hovering between 20 to 30 per cent.


To tax the system a little further we switched to a 1080p version of ”Elephant’s Dream”, encoded in MPEG-4 with 5.1 channel AC3 audio. Here the CPU utilisation varied more. In complex scenes it peaked at around 70 per cent, with lows of 30 per cent. No matter how taxing the scene, though, the Revo still didn’t drop a frame – very impressive.
(image:img0193s)

This seals the Revo’s credentials as a living room media PC, particularly as it also remains very cool and quiet throughout. That it runs Windows Vista Home Premium is also a bonus in this respect, since you also benefit from Media Center. It’s perhaps a little puzzling that there’s no IR receiver on the Revo, though this functionality could be added.
(image:img0206s)

Of course there is a more fundamental barrier to contend with first, that being the need for software capable of hardware acceleration. An excellent free option is Media Player Classic Home Cinema, but Acer also has you covered here, since it provides Cyberlink PowerDVD 9 pre-installed. This has the added bonus of integration with Media Center, in addition to very good DVD upscaling (should you connect a drive), though it can’t handle a container like MKV. For that you’ll need the aforementioned MPC Home Cinema.

Along with video decoding, nVidia has also been keen to promote the gaming credentials of ION. However, here we feel it has overplayed its hand somewhat. Fine, it’s better than Intel’s integrated graphics offering, but an asthmatic ant could produce better performance, so it’s hardly saying much. Moreover, while it can run some games at playable frame rates, you have to turn the settings and resolution right down, so the quality of experience is hardly worth the bother.
(image:img0204s)

Perhaps of greater potential are CUDA accelerated applications, something that’s particularly enticing due to the low-power processor’s limited capabilities. To demonstrate this benefit all Revo’s come with trial versions of two CUDA applications, Baddaboom and vReveal.


Baddaboom is particularly useful since it’s perfect for re-encoding videos for your portable media player, something you’d likely want to do on a nettop such as this. vReveal, meanwhile, cleans up poor quality video. This is a cool idea, but of the two Baddaboom seems like the most useful and it’s also cheaper, costing only -21 compared to 39 for vReveal.


It must be stressed, though, that CUDA is a fairly niche benefit right now and while Vista’s Aero Glass effects are smooth thanks to the superior graphics, it can’t do anything to help with general performance. And, when you match an Atom processor with Vista, it’s predictably sluggish. Not quite unbearable though, with recent updates Vista is more efficient than it once was, but it’s not an ideal combination. Unfortunately, unless you opt to install Windows 7 RC1, it’s also unavoidable, since DirectX 10 is required to run all the GPU accelerated goodness of ION.
(image:mounting)

Indeed, it’s only this that leads us to hesitate about the Revo, since in every other respect it’s a real winner. It’s a very nicely designed device, even if the plastic stand seems something of an afterthought, while the VESA mounting is a very neat trick. It’s also extremely affordable, especially for a PC capable of such flawless HD video playback. This in particular makes it a no brainer as a media PC, but for regular usage the choice of Vista is troubling. This might not be Acer’s fault, but a problem it remains.


nVidia’s ION platform delivers handsomely and Acer has responded in kind with the Revo. It ticks all the right boxes where nettops are concerned, while ION gives it a definitive edge over competing offerings. Only the use of Vista really holds it back, but if you’re after a cheap and effective media PC for your living room, you shouldn’t let this hold you back.