We’ve been seeing quite a selection of remarkable small desktop systems recently, aimed mostly at the Home Theatre PC (HTPC) crowd. The requirements for these are compact dimensions, stylish looks, and the ability to play back Full HD video, with Blu-ray being high on our ‘want’ list. The impressive and passively-cooled Tranquil PC ixL was too expensive and lacked Blu-ray, while the Zotac ZBOX looked stylishly futuristic and was incredibly slim, but suffered from inferior build quality and a distractingly audible fan. Up to this point then, the ASRock Core 100HT-BD is still our top choice but now we have an entrant that might blow even this machine out of the water: Acer’s Aspire Revo RL100 3D.

For those who are thinking of the company’s older Revo, this is a completely different, far superior machine. It’s not only significantly more powerful, but also more stylish, comes with an integrated Blu-ray drive, is 3D capable and features what is one of the most awesome HTPC remotes we have ever seen.


Mind you, the PC itself is already quite a talking point. At 25x180x300mm (WxDxH), it’s the slimmest full-blooded HTPC we’ve seen, and easily rivals the Zbox for sleek looks – though what it most reminds us of is a slimline Playstation 2. Its semi-matte black finish is subtly attractive and the glossy bronze highlights only add to its classy aesthetic. Another advantage is that this finish is far easier to maintain than the all-gloss efforts of many rivals. 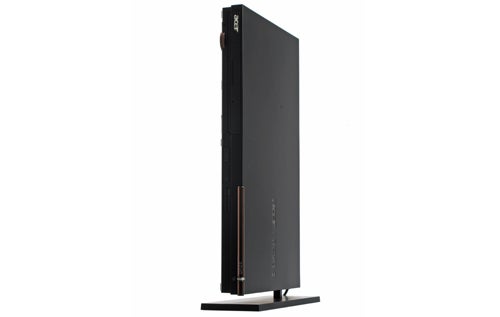 Though you can certainly use it in its landscape orientation, this Revo has really been designed to be shown off upright. Acer includes a stand that simply slots into a groove in the machine. As the stand’s neck is narrow and positioned at the rear, this gives the impression that the chassis is floating. Overall then, it’s a great piece of design and will certainly fit in neatly with most AV setups (assuming you go for the horizontal orientation – Ed).

Though its chassis is constructed entirely of plastic, the Revo 100 feels solid and is definitely one of the better-built slim PCs around. The base, which simply slots into the main unit, is reinforced and weighted with metal. Unfortunately its connection to the main unit is also the one exception to the otherwise superb build, as it evinces some wobble.

At this stage you might be thinking that the slim Revo RL100 is severely compromised in the specifications department for Acer to have achieved its 2.5cm slimness while still integrating an optical drive and slot for the aforementioned remote. Thankfully, that’s not the case. 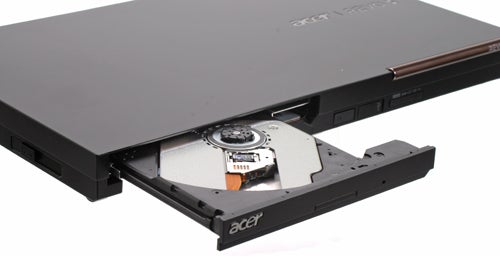 Beating at the heart of this computer is AMD’s Athlon II Neo K325 dual core processor. As we saw when we reviewed the same 1.3GHz model in the Dell Inspiron M101z, this low-power CPU easily outperforms Intel’s competing Atom – even when compared to the most recent 1.8GHz N525 found in the Asus Eee PC 1215N.


It’s backed up by 2GB of DDR3 RAM, which isn’t overly generous but is enough to keep up with the demands an average user would place on this kind of system. There’s a free DIMM slot if you wanted to upgrade to 4GB, and the 64-bit version of Windows 7 Home Premium installed will take full advantage if you do. For permanent storage you get a 2.5in, 500GB drive, which is adequate for a halfway decent film collection. Higher-end models should be coming out at a later date, and will probably sport 4GB of RAM and a 750GB drive.

Surprisingly (considering the AMD CPU), graphics are handled by Nvidia’s ION solution. It might not be up to much on the games front, but it’s certainly adequate for 1080p video acceleration and, equally importantly, can output ‘real’ 3D video over its HDMI 1.4 connection so you can watch demos and 3D Blu-rays with the extra dimension enabled.


Connectivity is good, though not quite up to some more recent rivals such as the Zotac ZBOX and ASRock Core 100HT-BD, both of which offered USB 3.0 and eSATA. However, around the back you still get two USB 2.0 ports, 3.5mm headphone and microphone jacks, a TV tuner antenna jack for the integrated tuner, an optical digital audio output for hooking up to surround sound (when not using HDMI for this), an HDMI output and Gigabit Ethernet port.

Around the front is a third USB port hidden behind a solid but somewhat awkward rubber flap, the tray-loading slimline Blu-ray drive, and a memory card reader that accepts SDHC/XC, MS Pro/Duo and MMC.

Forget about its stunning design, good build quality and interesting specifications, though; what truly makes the Revo 100 lust-worthy is the best bundled remote we’ve ever come across, and it even betters many third party solutions. Yes, we realize that’s a sweeping statement, but that doesn’t make it any less true. 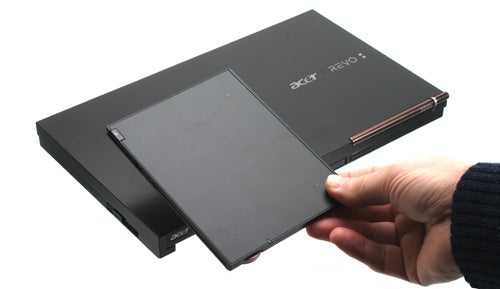 Cleverly, the remote slots seamlessly into the machine when not in use, where it charges and acts as a volume control wheel. Pushing a slightly stiff lever at the top (when the Revo is standing up) releases the remote. Fear not though, if you’d rather not use this method you can also charge the unit using its discrete mini USB port (incidentally the same charging method that’s used on many older phones and the PS3). 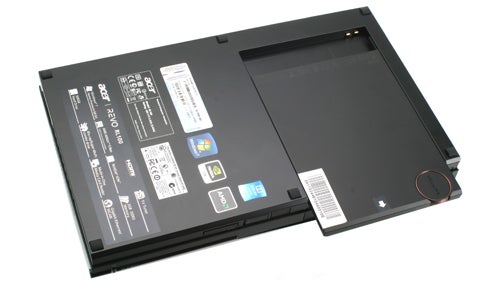 Once detached from the PC, it looks like an unassuming, low-profile rectangle with a flat bronzed wheel slightly protruding at one corner – and it only has one button. Pressing this unobtrusive, blue-backlit ‘power’ button activates it. And here’s the really clever bit: in its default mode, it’s basically an equivalent of the Apple Magic Trackpad. In this mode, it supports up to four-finger multi-touch and an intuitive range of gestures. It has a spacious active area of 13.5cm from corner to corner, is pleasant to the touch and very responsive. 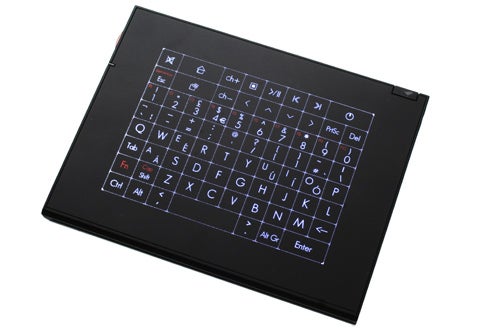 Press the ‘power’ button a second time, and a white-and-red backlit full-qwerty keyboard appears from the blackness of the trackpad. As well as all the keys found on a regular keyboard, this sports a whole range of shortcuts and dedicated controls, including playback and volume. It works brilliantly, and its large ‘keys’ mean it’s approaching the ease of typing you find on a quality touchscreen smartphone, especially when using both thumbs.


Yet another clever touch is that the aforementioned bronze wheel automatically switches between a scroll wheel in pad mode and controlling volume in keyboard mode. The remote weighs only 134 grams, so it never feels heavy. A stick-on rubber mat is provided which you can attach to its base if you wish, to prevent scratching and slippage. Overall, it’s so good we wish it was available separately, in which case we would buy it in a flash. 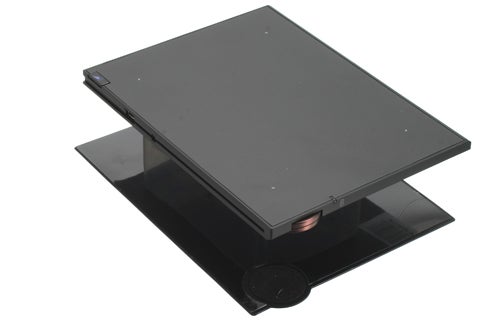 Of course you can always hook up a regular keyboard and mouse to the Revo 100, but this shouldn’t be necessary for the majority of its use.

Looking at performance, AMD’s 1.3GHz Athlon II Neo K325 has a healthy lead over the 1.8GHz Atom found in the Zotac ZBOX and even holds its own compared to Intel’s full-fat 2.13GHz Core i3, as found in the ASRock Core 100HT-BD. Crucially, unlike the Atom it will let you play back Full HD video without the assistance of its dedicated graphics, which might be handy if using obscure media players that don’t support graphics accelerated playback.

However, while Nvidia’s ION will serve for daily tasks, you’d best keep 3D gaming very light indeed, as even at 1,366 x 768 the Revo only achieved a 15.6 frames per second average in TrackMania Nations Forever.


Despite having no unsightly cooling vents (there’s only one modest grille around the back), the Revo never gets particularly hot in use. As long as you’re not using its optical drive it’s also virtually silent, with the loudest noise it produces being the clicking of its mechanical hard drive. 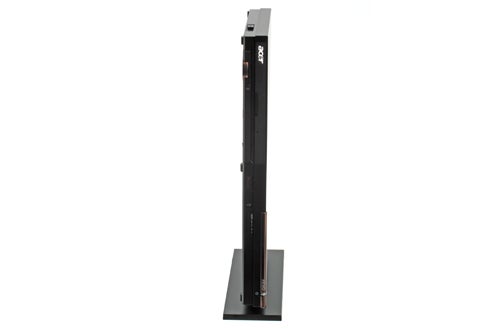 On the software front Acer keeps things minimal, with a pointless if rather slick touch-optimized browser (which is probably a remnant from the company’s touch-capable machines), clear.fi (which facilitates easy-as-pie media sharing between network-connected Acer devices) and a media player that can handle 3D.


So far then, we have a very attractive, slim, well-built machine with adequate specifications to cope with everything in its intended market. However, it doesn’t exactly come cheap, currently demanding just a penny short of £500. For less than half of that money you could get a networked 3D Blu-ray player with media playback, such as the Award-winning Sony BDP-s570.

So why bother with the Revo 100? Well, for one there’s its extra flexibility due to it being a proper PC. At the very least it leaves you secure in the knowledge that there isn’t a single video or audio format, no matter how obscure, that it won’t play. Moreover, there are all the other things you can do with any desktop computer on both the productivity and gaming fronts, which considering the brilliance of the remote will be more useful than on many alternative media centre PCs.


As to PC alternatives, the Zbox will set you back £399 without an OS, TV tuner, 3D video capabilities or remote. And although it does offer USB 3.0, multiple digital video outputs and is slightly smaller, in almost every other regard it’s an inferior machine. Overall then, we would definitely say the Revo is our preferred choice if you can afford the extra.

A more threatening opponent is the THX-certified ASRock Core 100HT-BD. If you need more power than the Revo RL100 can supply, it’s a good option with its faster CPU and double the memory. But you’ll still need to buy and install Windows separately and it won’t play 3D Blu-rays, nor do you get a remote that’s even remotely (sorry) as awesome. We already have its successor, the ASRock Vision 3D, on our test bench, but until then Acer’s HTPC wins out again.


Though it’s not on the cutting edge of connectivity, in every other regard the Acer Revo 100 is our favourite HTPC. It’s slim, stylish, quiet, well-built, can handle most tasks effortlessly and has the coolest bundled remote you’re likely to see this year, all of which makes its high price sound like decent value.