What’s the next form of desktop computer? Some think the desktop PC is dying out altogether, but the Acer Aspire R7 offers another solution. This intriguing 15.6-inch device is a mix of desktop, laptop and tablet. But is it a next-generation computer or an evolutionary mis-step?

By far the most interesting part of the Acer Aspire R7 is its hinge. Acer calls it an “Ezel” hinge, and it is what lets the R7 skip between these computing roles.

The Ezel hinge moves the screen smoothly between the traditional laptop position, with the keyboard below fully exposed, to the “pad” position, where the screen completely covers the keyboard. It’s the spot in-between these two positions that Acer calls the “Ezel” mode. 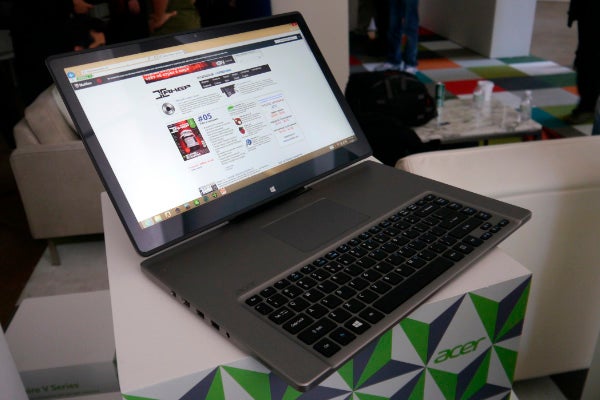 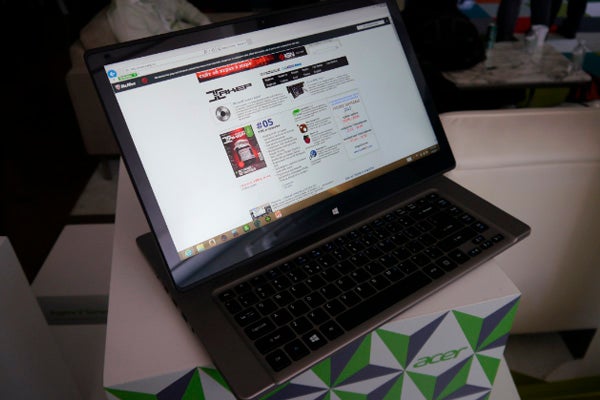 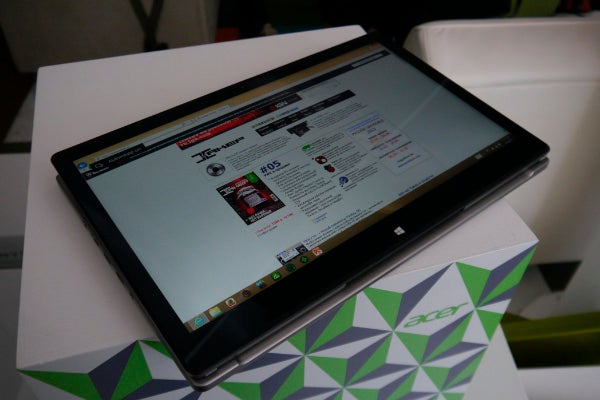 It’s a two-axis design that also allows the screen to be flipped around completely, facing away from the keyboard. And the hinge can be closed just like a laptop, protecting the screen.

Acer says that the premise is to make touchscreen control on a laptop feel much more natural.
It takes a little getting used to, though, especially as the trackpad sits above the keyboard, which initially seems utterly bizarre. 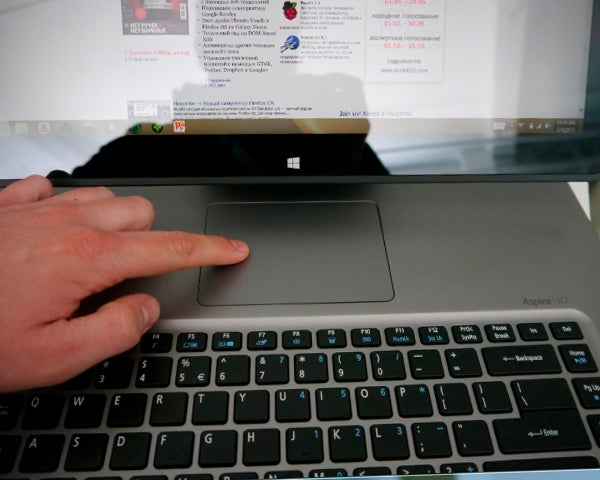 However, getting up close and personal with the Aspire R7, the design starts to make a lot more sense. And that’s partly down to quite how well-made the computer is. The hinge is sturdy enough to keep the screen in position for touchscreen use, and the majority of the laptop is constructed using metal alloys rather than plastic.

The keyboard surround is a magnesium-aluminium alloy, and the hinge is brushed aluminium. Only the rear of the screen is finished in plastic, although Acer assured us this was only to achieve the contouring of this plate – and that there is the same magnesium-aluminium underneath the plastic outer. 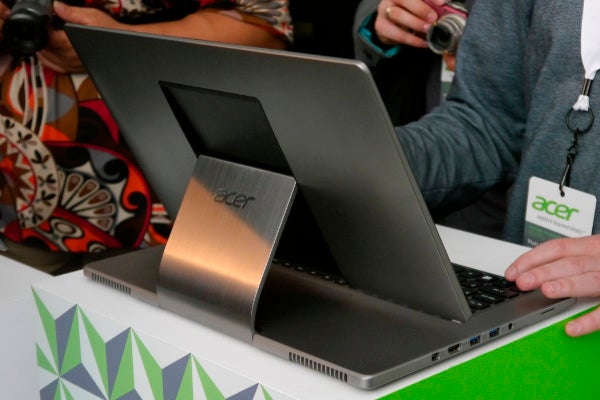 This is the sort of design experimentation we’d expect from Asus, not Acer. However, the manufacturer seems to have pulled off the experiment pretty well.

The keyboard is great too, with well-spread keys, great key action and a keyboard backlight. 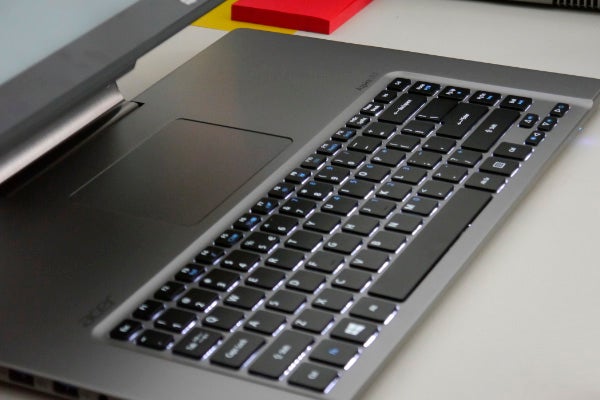 Coming back down to Earth, connectivity is fairly standard for a large laptop. There are two USB 3.0 ports on the left edge, alongside an HDMI socket, headphone jack and converter port that can function as an Ethernet port, VGA output or USB with various adapters. The other edge supplies an additional USB port (version 2.0 this time), SD card slot and a volume rocker. 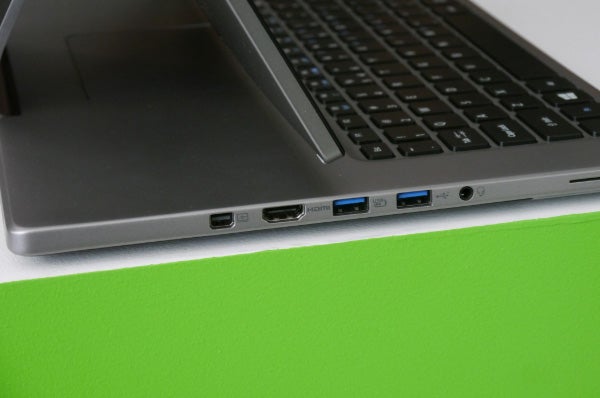 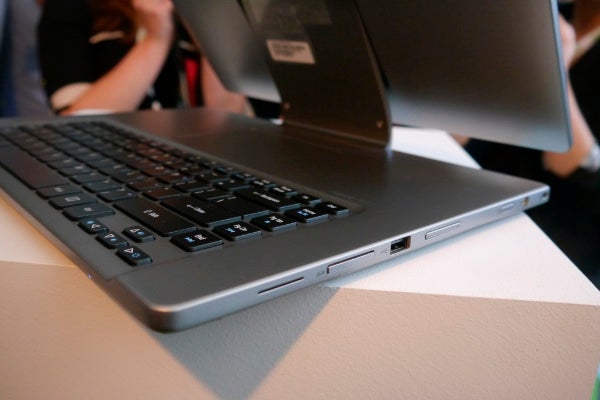 What makes the Acer Aspire R7 convincing as a full home PC solution is its relatively large 15.6-inch display. It’s not a size that gamers or photo editors will be impressed by, but this is primarily a lifestyle device, not one for the hardcore crowd. It’s also too large and heavy to function particularly well as a portable tablet – it’s just too big and heavy to compete with a 7-inch or 10-inch tablet in those role. 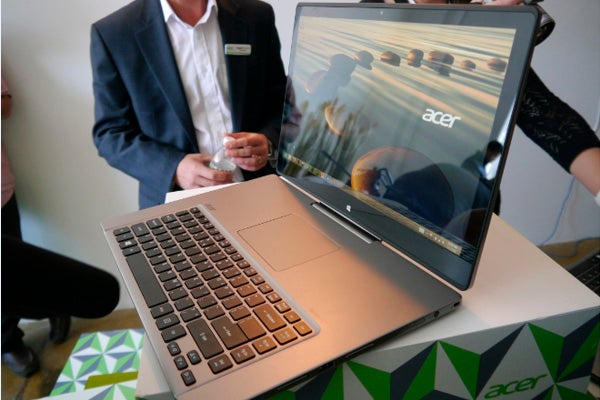 The display is a 1080p IPS touchscreen with a semi-glossy finish. It seemed to use a pretty decent oleophobic coating as the much-prodded screen was still perfectly visible. Image quality is great too, with rich colours, deep black and respectable sharpness at normal viewing distances. Now that tablets often offer staggering pixel density, 1080p spread across 15.6 inches doesn’t sound like a lot – but from a few feet away it’s more than adequate.

The Acer Aspire R7 will be available in an array of configurations, all of which are pretty powerful. It uses an Intel Core i5 processor, up to 256GB SSD – or 1TB hard disk -and up to 12GB RAM.  There’s no low-cost option, although given the exotic design the £999 entry price seems fairly reasonable. 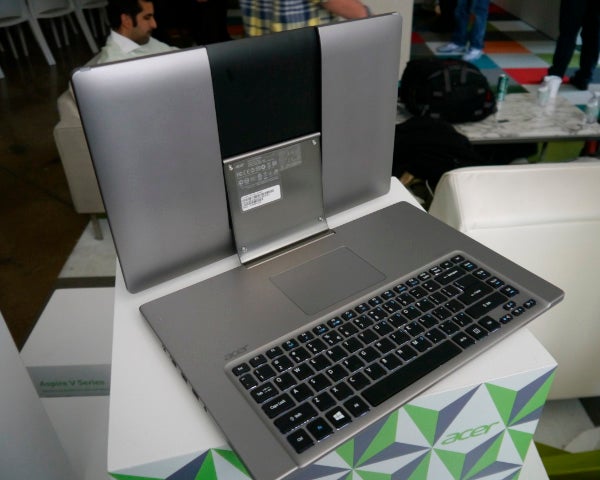 Whether the Acer Aspire R7 is really going to prove a handy melding of laptop, desktop and tablet will only be revealed after prolonged real-life use. But the first impressions it leaves are positive. Clear thought has gone into its design and construction. There’s a definite learning curve to using the touchpad, and you can get more power for your money if you’re not in love with the curious design. However, this is worth keeping an eye on.