As its name suggests, the D260 is Acer’s current-generation sequel to the company’s unfortunate D150, a netbook that was only distinguishable by its rather unattractive design. We’ve already seen that Acer has made a significant change for the better in this department with the Aspire One 533, but – unexpectedly – the D260 sports a notably different chassis. Before we get into how it looks and feels, however, let’s check out what’s under the hood. 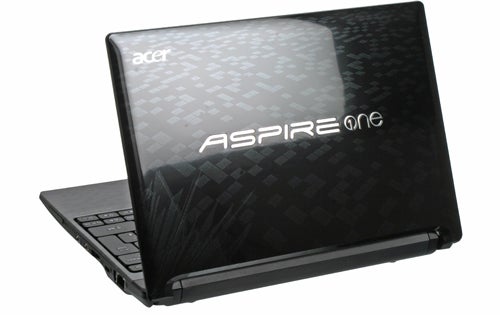 In terms of specifications there are absolutely no surprises, and the 10.1in D260 is as basic as it gets. An N450 Intel Atom CPU sits at the helm, running at 1.66GHz. It has 1GB of memory, which is just enough for Windows 7 Starter to get by on, runs Intel’s integrated GMA 3150 graphics (i.e. 3D gaming is out of the question), includes a slightly stingy 160GB hard drive – though arguably this is already more than most netbook users will need – and 802.11n Wi-Fi, but no Bluetooth. Of course a webcam and microphone are also integrated.


As you would expect, the D260 is considerably cheaper than the £300 Aspire One 533, and can be found for around £230. For most, the loss of Bluetooth and perfectly smooth 720p HD video (due to the 533’s slightly faster processor) are probably acceptable considering you pay £70 less. 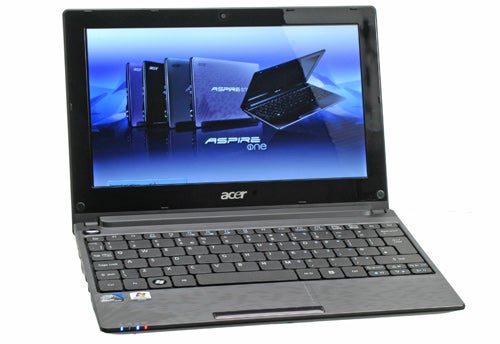 Surprisingly, we find the D260’s design far superior to that of the higher-end 533. For one thing, it’s slightly thinner, and its battery doesn’t protrude out as much, which is odd as it offers exactly the same capacity. For another, its screen rests lower on the main hinge, so the gap between the bezel and hinge isn’t as pronounced. On the 533, the power button is small, whereas the D260 features one that’s the size of the average person’s fingertip, making it easier to press. Finally, while visually the uniquely patterned finish around the keyboard could be considered a matter of taste (we rather like it), ergonomically its smooth, soft-touch surface makes it far nicer to rest your palms on and gives it a sleek premium feel. The only downside is that, unusually, not only the netbook’s lid but its base too is finished in glossy black plastic.

Because of its more recessed battery, the D260’s keyboard also isn’t sloped like that of the 533. This makes typing more comfortable, especially since it also means your palms aren’t resting on the netbook’s front edge so heavily. The keyboard itself looks nearly identical, sporting a matt black finish and good layout with full-size Enter and right-Shift keys. Key feedback is a tad on the shallow side and unfortunately not as positive or springy as that found on the 533, but it’s still usable.

Unlike on the 533, the multi-touch touchpad is raised ever so slightly, giving instant feedback when you leave the touch area. It’s positioned so it doesn’t interfere with typing, and is finished in the same soft plastic as the palm rests, which is very pleasant. Its buttons are incorporated into a single chromed rocker switch and offer crisp presses, but the right button’s active zone is too far to the side, forcing your thumb to stretch uncomfortably.

Connectivity on the Acer Aspire One D260 is par for the course, consisting of three USB 2.0 ports, an analogue VGA output for video, 3.5mm headphone and microphone jacks, a memory card reader and 100Mb Ethernet.

Likewise the screen is the same size (10.1in) and resolution (1,024 x 600) as found on most netbooks, and unfortunately sports the glossy, reflective finish that’s all too common. It’s a slightly better than average performer thanks to decent greyscale differentiation (meaning you’ll see more dark detailing in films, albeit at the cost of white purity), no obvious backlight bleed/inconsistency or banding and excellent sharpness. Viewing angles are only mediocre though, and vertically especially the screen displays significant contrast shift so you’ll need to take care how you angle it when viewing pictures or video.


When it comes to audio the D260 performs similarly to the more expensive 533, lacking in volume, punch and depth. Overall then we’re not too impressed despite generally clear reproduction, meaning you’ll want to hook up a pair of headphones or external speakers. 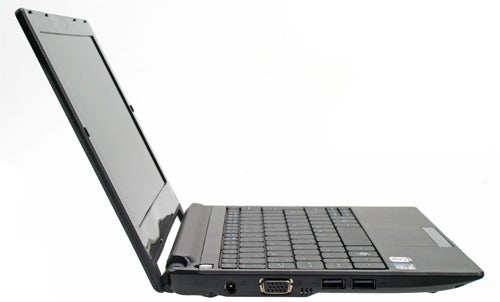 Battery life is good if not quite up to (admittedly far more expensive) rivals, with the six-cell, 4,400mAh (49 Watt-hour) battery lasting for just over six hours in our video playback test with screen brightness at 50 percent and Wi-Fi turned off. That should be plenty for most users, and less intensive use with a still usable lower brightness ought to see you well into the seven hour mark. It’s also more than the similarly priced Samsung N130, which does benefit from a non-reflective display that may tempt many.


When it comes to value, the £230 D260 has the potential to catapult the Aspire One netbook range back into the popularity it enjoyed with the original Aspire One, as this is cheaper than most netbooks based on the newer Atom N450. Acer’s choice to go for a smaller hard drive and omit Bluetooth has really paid off in this regard, as compared to £280-plus rivals like the MSI Wind U160 and Toshiba NB250, the D260 not only offers identical performance but also far superior ergonomics. 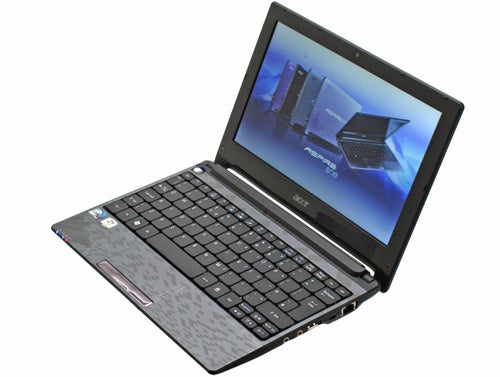 
While the Aspire One D260 doesn’t bring anything new to the table where specifications are concerned, its visual flair and soft-touch ergonomics lend it an edge, honed further by a price that easily undercuts rivals.