Going by all the usual industry metrics Acer sells more netbooks than anyone else. This is a big deal given the size of the market and growth expectations, but despite its dominance it hasn’t until now had a 10in netbook even though the market has been moving in this direction. This is partly testament to the quality of its first outing, the Aspire One, which sported an excellent keyboard for the form factor and very attractive pricing, but also the power of Acer’s distribution system. When you’re flogging the things in Tesco at £180 a pop you’re bound to rack up a few sales, even if the people buying it have no idea what’s in the box!


Clearly, then, not having a 10in netbook hasn’t been a barrier to Acer’s success, but that hasn’t stopped the Taiwanese computing giant opting to move into this market. Its effort, titled the Aspire One D150, is available in a variety colours, including white, black, blue and red. We’ve got the white one, which has a glossy-white lid, matte-white base and black finish inside. 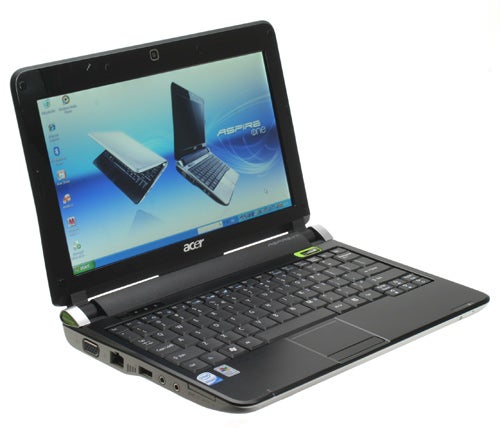 We’ll be getting onto our design evaluation a little later, but first there’s the internals to deal with and they throw up little in the way of surprises. For processing there’s an Intel Atom N280 running at 1.66GHz and this is supported by 1GB DDR2 RAM and a 160GB hard drive. Wireless connectivity is delivered by Wireless-G Wi-Fi and Bluetooth 2.0, while wired networking is catered for by 10/100 Fast Ethernet, so you’re not stuck with just Wi-Fi. 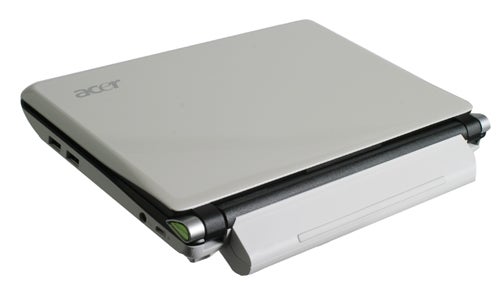 Connectivity is also defiantly normal. On the left there’s a VGA port, the Ethernet port, a USB port, the headphone and microphone jacks and a 5-in-1 memory card reader. Then, on the right, there are a further two USB ports, the power input and a lock slot. One other item of note is the Wi-Fi switch on the front and unlike many netbooks and notebooks there’s a separate button, just above the keyboard on the left, for switching Bluetooth on and off. This is a useful addition if you find yourself using Bluetooth regularly, independently of Wi-Fi, or if you rarely use it and don’t want it on when using Wi-Fi. Either way, it works out well.

As ever there’s a 0.3-megapixel webcam above the screen and the screen itself is a very good one. Measuring 10.1in, with the usual 1,024 x 600 resolution – it does have a glossy finish, so reflections are an issue, but it’s exceptionally bright, has nice colour rendition and surprisingly good horizontal viewing angles. It’s definitely up there with the best netbook displays we’ve seen, matching up well with the Samsung NC10 and besting the slightly watery effort found in the HP Compaq Mini 700 we reviewed recently.

Audio is less of a revelation, failing to match up to Asus’ example in its Eee PCs, but it remains passable nonetheless. As with a lot of netbooks, though, the speakers are housed underneath the machine, which is always is a little awkward if you’ve got it perched on your lap.

As one might expect with the move up to the larger form factor, Acer has also upgraded the battery. Our sample version came with a six-cell, 5,600mAh version producing in excess of five hours, but don’t get too excited; the final retail version will ship with just a 4,400mAh battery instead. Going by previous experience (the MSI Wind U100-291UK sports an identical capacity battery) you’ll still get over four hours of use with wireless turned off, or around three and a half hours of web browsing, so it’s better than the puny three-cell or four-cell units found in some netbooks. It’s a far cry, though, from the Samsung NC10 or the Asus Eee PC 1000HE, which Asus now tells us will retail for around £329, not the £359 originally quoted in our review. 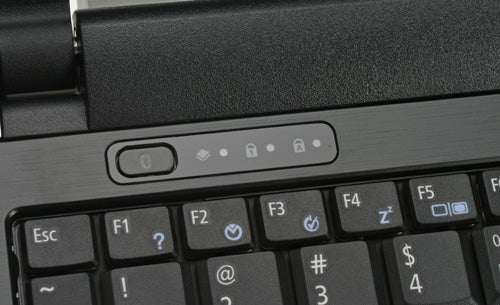 This would put the 1000HE in the same price bracket as the D150, though we won’t hold our breath until we actually see one on sale. After all, it’s just as likely that the D150 will come down in price as well or that retailers will simply ignore Asus’ “suggestions”.


It’s worth noting, too, that there’s a little more to the D150 package than just the machine itself, since it comes bundled with a slipcase. It’s a really good one, too. Replete in black neoprene, it is thick and fits very snugly around the chassis, providing excellent protection. It’s far preferable to the token effort supplied with the Samsung NC10 and even bests the otherwise excellent efforts provided by Asus. 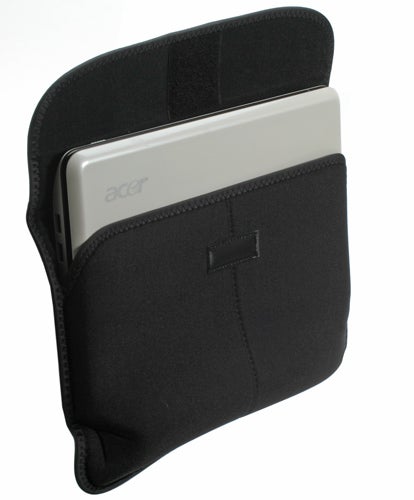 Unfortunately, for Acer at least, people aren’t generally in the habit of spending nearly £330 on a nice slipcase, because despite the decent bundle and above average screen, the D150 as a whole is exceedingly underwhelming. Early impressions of the machine are decent enough. On the outside our white version looks quite tidy and we even like the slightly eccentric lime green hinge endings. It’s not until you open the machine up that things start to go wrong.


To begin with, there’s a bizarre lack of cohesion about this design. Surrounding the screen is the obligatory glossy-black plastic, below which is a section of cheap looking matte-black plastic bookended by silver segments. Then, on the main body of the machine, is a slightly odd section of black plastic that has the texture and appearance of brushed metal, but which is, on much closer inspection definitely plastic. These contrasting finishes throughout the machine are simply jarring and unattractive, while we’re even less enamoured with how the six rubber coasters around the screen leave ugly marks on the base after lifting the lid. 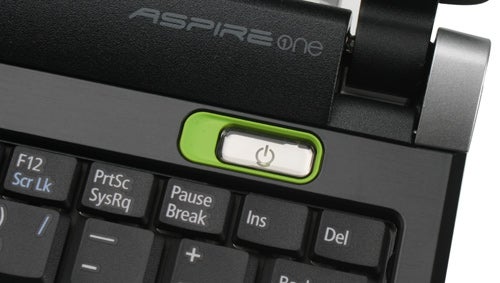 Our special ire, however, is reserved for the ugly lime-green accenting around the power button. While this effect just about works on the hinge endings, thanks largely to far superior execution, here it’s simply achieved through the use of some thoroughly cheap and nasty plastic. Quite why a simple button wouldn’t have sufficed is beyond us and it simply compounds the feeling that, somewhere along the line, something has gone badly wrong in the design department.

Aesthetically, then, the D150 isn’t quite the triumph Acer surely meant it to be and the design issues aren’t just superficial, either. You would think, given the move to a larger chassis, that Acer would do what everyone else has done and improve the keyboard, but it has taken the galling decision to not do this. Instead you’re left with the exact same keyboard as found on the original 8.9in Aspire One. 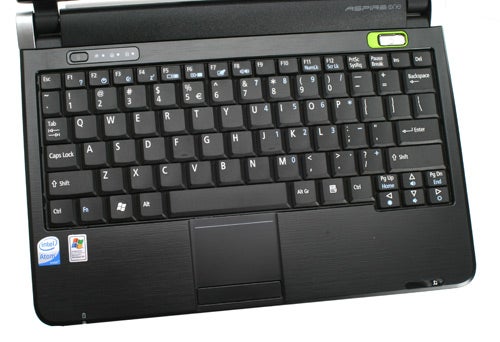 We can only surmise this is done for cost reasons, since it’s easier/cheaper for Acer to drop the same keyboard into a different chassis than make a whole new one. However, as already intimated, this rather defeats the object of making a larger netbook. As it is, while the keyboard was pretty good for an 8.9in netbook it’s just not good enough for 10in one. Keys, though useable, are noticeably smaller than those found on the Samsung NC10 or Eee PC 1000HE, making them less comfortable when typing for long periods. Key travel and feedback are also noticeably lacking, so while the typing experience is still passable, it’s no better than before.


Acer has also contrived to mess-up the touchpad. Gone, thankfully, are the buttons either side of the touchpad, but they’ve been replaced by a rocker style button that’s irritatingly stiff and unresponsive. We also found the touchpad itself a little cramped, especially since the invisible scroll zone restricts the usable area somewhat. 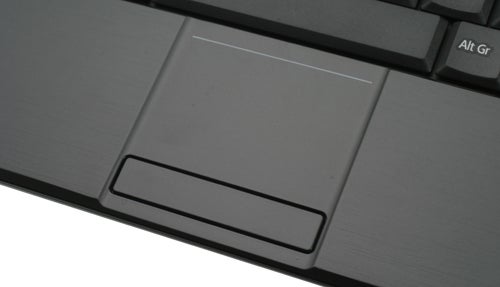 Fundamentally, the main problem for the D150 is that there are very few reasons to buy this machine over any other 10in netbook. Samsung’s NC10 still sits comfortably at the top of the pile; marrying excellent design, ergonomics and above average battery life with a reasonable price. Asus’ Eee PC 1000HE, while beginning to look a little long in the tooth, also remains an excellent option thanks to its improved keyboard and superlative battery life.


Likewise, while the MSI Wind struggles to match the Samsung and Asus in some respects, it arguably offers among the best keyboards of any netbook and likely identical battery life to D150. Worse still, since the keyboard is no different, why would one buy the D150 when you can get the original Aspire One and buy a six-cell battery for less outlay? Whichever way you look at it the Aspire One D150 doesn’t make a great deal of sense. 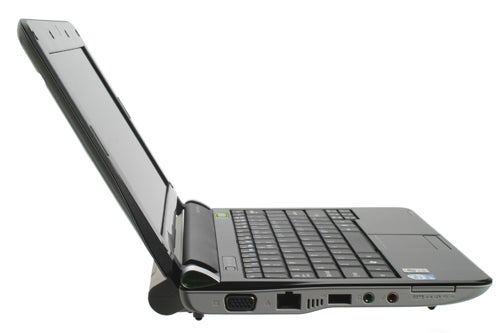 
Acer’s decision to move into the 10in netbook sector makes perfect sense, but its execution doesn’t. Despite the larger chassis it has chosen not to improve the keyboard and though the price and spec are in line with expectations, the D150’s design and ergonomics don’t compare well to the competition. In a market where very little separates one product from another, these are significant failings.