After the ugly mediocrity that was the D150, Acer needs to deliver a pretty good product in this generation to return its Aspire One netbook range to the popularity the original Aspire One enjoyed. And at first look, it appears to be making a pretty good attempt with the 10.1in Aspire One 533 we’re looking at today, which sits at the high end of the new range.


First off, the specification list on this netbook is not the identikit repetition you might expect it to be. Most importantly, the Intel Atom CPU beating at its heart is a 1.83GHz N475 rather than the 1.66GHz N450 found in most netbooks. While it’s still underpowered compared to almost anything else and won’t handle 1080p HD video, a tangible advantage is felt with heavy-duty 720p video. Where slower Atoms may skip or stutter on occasion, the N475 plays even the most intensive 720p files smoothly. 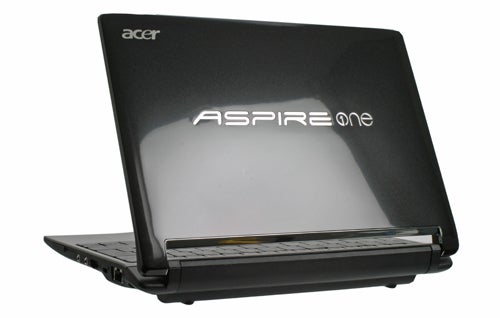 Unfortunately other specs remain the same as most netbooks, with Windows 7 Starter 32-bit as the OS of choice running on 1GB of RAM, a 250GB hard drive for permanent storage, integrated Intel GMA 3150 graphics and 802.11n to supplement the 100Mb Ethernet. The only other surprise is Bluetooth 3.0, and though we doubt it’s a feature many are pining for, it does help the 533 stand out in a very overcrowded market.


Connectivity is again standard, with two USB 2.0 ports and a VGA analogue video output along the left, and a third USB socket, memory card reader and audio jacks (one headphone, one microphone) on the right. With the 533’s increased HD capabilities, it’s even more of a pity that there’s no HDMI. 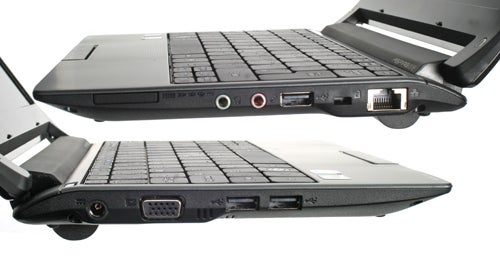 As far as design goes, meanwhile, we mostly like what we see. While the 533 retains some DNA from the D150, it’s now a more streamlined and cohesive netbook. The lid and screen bezel remain fingerprint-loving glossy black, but the keyboard surround and palm-rest area are finished in a soft gunmetal finish that’s easy on the eye and feels great. Partially thanks to some aggressively tapered edges, the 533 also feels a lot slimmer than Acer’s older models.

Due to the machine’s protruding battery, the keyboard is gently sloped – though not to the almost uncomfortable degree of the MSI Wind U160. Our only real complaint would be that the base of your palm ends up resting uncomfortably on the netbook’s lower front edge. This is a pity, as the matt black keyboard is frankly superb. Layout and key-spacing are excellent, the Enter and Right-shift keys are large, and shortcuts are logically placed. The best aspect is key feedback, which is positive and crisp with no flex to mar the experience.

Likewise the multi-touch touchpad is nice to use, though it’s sometimes hard to feel where it ends and the palm rest begins due to its flush design. Nonetheless, it’s very sensitive and its surface is pleasant to use. We’re not as enthused by the pad’s buttons, however: built into an attractive single rocker switch, the left button is stiff and occasionally doesn’t click, while the right one’s active zone is too far away, forcing your thumb to stretch further than it should need to.

Inevitably, the 533’s 10.1in, glossy screen sports the same 1,024 x 600 resolution as most other netbooks, but it’s actually quite decent. Colours are convincing and black levels relatively deep. Sharpness is also excellent, aiding readability, and the backlight is consistent. Viewing angles are mediocre at best though, so be careful how you angle the display.


As we’ve been getting used to halfway decent speakers on laptops and netbooks recently, the 533’s are a little disappointing. Though they don’t distort badly, their maximum volume is unimpressive and clarity is somewhat lacking in the high end. 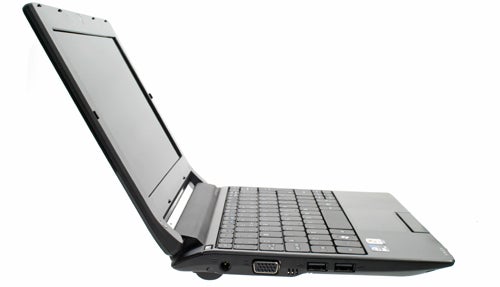 The 533’s six-cell, 4,400mAh battery managed just over five and a half hours in our video playback test, where wireless radios are turned off and screen brightness is set to 50 percent. This is okay but not outstanding, though the screen was still more than bright enough so you could easily dim it further to get longer life. We wonder to what extent the more powerful CPU is responsible for the slightly reduced performance here.


Value is a tough call. There’s no denying that our review model’s £300 price (not to be confused with the £280 533-13Dk sporting the more common 1.66GHz Atom) is cheap when compared to current rivals that frequently sport lower specifications. However, we’re not convinced the extra performance or addition of Bluetooth 3.0 elevate it above netbooks around the £280 bracket, and Acer’s own D260 (review coming next week) can be had for just £230. 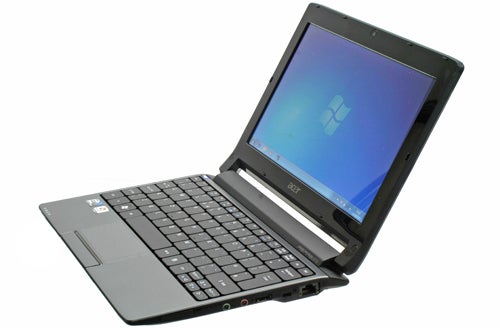 
Acer’s Aspire One 533 sets itself apart from other current-generation netbooks with a faster Atom CPU and Bluetooth 3.0, and surprisingly doesn’t charge extra for these privileges. However, these are still only incremental improvements rather than must-buy features, and there are cheaper alternatives.