Acer has opted for AMD hardware inside the Aspire. The A10-7300 is an APU, which means it’s got processing cores and a Radeon graphics chip inside the same package. It’s based on AMD’s latest Kaveri architecture, and it’s got two multi-threaded cores that start at 1.9GHz and can hit a Turbo peak of 3.2GHz.

The Radeon R6 core inside the A7-7300 has 384 stream processors that run at speeds between 464MHz and 533MHz. The former number is comparable with AMD’s low-end discrete mobile chips, but the R6 core’s clocks can’t compete with separate GPUs.

The AMD hardware compares well to the competition – both of those machines use Intel Pentium silicon with the same architecture as low-end Atom chips.

The A10-7300 scored 2,042 in the PC Mark 7 benchmark and 3,091 in the Geekbench test. Both results are faster than the Toshiba, and the Lenovo managed to pull ahead in the Geekbench test. The Acer comes out on top, but these are all low-end scores, and the Aspire is only ideal for general computing and low-end work – it’ll struggle with anything tougher. 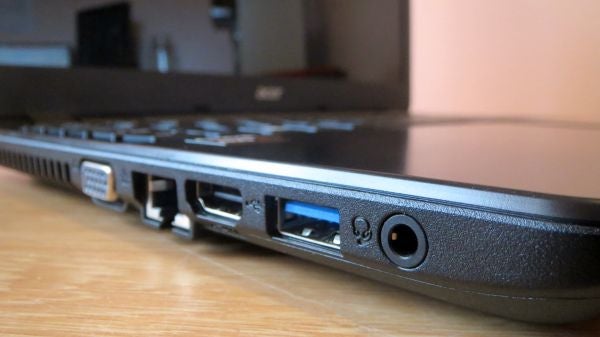 It’s a similar story in gaming benchmarks, despite the Radeon branding. The Acer easily beat the competition in the 3D Mark tests, but real-world performance was modest.

In Bioshock Infinite we had to use the game’s Very Low quality settings to hit a near-playable 28fps, but the minimum framerate of 12fps ensures that some sections will still lag. Battlefield 4 and Crysis 3 were slower still. The screen’s low resolution helps games hit better framerates, but this is still only a machine that struggles with anything more than low-end or old titles.

The 1TB hard disk has enough room for a decent media collection, but it’s not quick: sequential read and write speeds of 105MB/s and 93MB/s are average for hard disks and several times slower than SSDs. The lack of speed is noticeable in day-to-day use, where applications load with a pause that’s just not there on SSD-based systems.

The Acer’s thermal performance is near-impeccable. When idling, it’s just not possible to hear any fan noise unless you’re pressed to the chassis.

The Aspire performed similarly well during stress-tests. The CPU and GPU cores never topped 65°C, and the internal fan kept quiet throughout. You just won’t hear this laptop unless you go hunting for the noise. 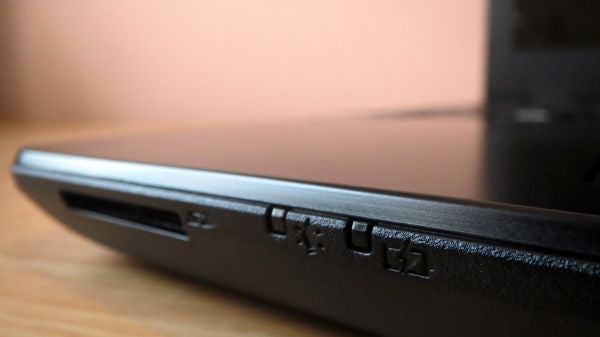 Acer has fitted a removable 56Wh battery to the back of the Aspire. Our Powermark test keeps the screen at 40% while running a web browsing and video chat simulation, and here the Acer lasted for 4hrs and 48mins.

That’s a reasonable result that’s better than the longevity you’ll find from many other £500 laptops, but it’s not able to match the new generation of hybrid machine. The Toshiba lasted for an hour more, and the Lenovo managed 6hrs 25mins.

In a more demanding work test, with the screen ramped up to 100% brightness, the Acer lasted for 3hrs 35mins. Again, that’s better than the results you’ll get from many other standard, affordable laptops, but it’s still not good enough for a full day of productivity.

Once the battery was depleted we plugged in for thirty minutes. After this short charge, the battery regained 32% of its capacity. That’s good for just over ninety minutes.

Used as our main laptop for the review period
Tested for at least a week
Used consistent benchmarks for fair comparisons with other laptops
Reviewed using respected industry benchmarks and real world use
Previous
Acer Aspire E5-551 Review Next
Keyboard, Trackpad, Software and Verdict Review