Acer is one of the market leaders in notebooks, but when it comes to buying a PC for the home, I must admit that Acer isn’t a brand name that would immediately spring into my mind. However, considering that it makes some of the best value notebooks around that’s probably short sighted. Indeed, is one of the few companies in the world that can make almost every component in the PC, a fact which is bound to lead to cost savings. 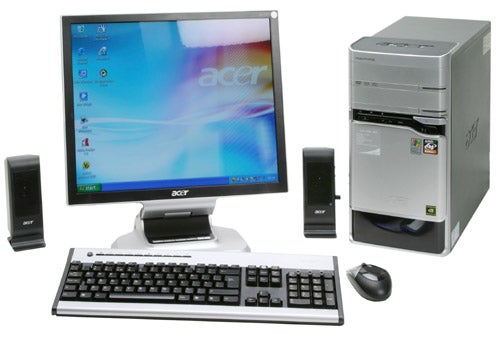 This seems to have paid dividends. With many brand name PCs you usually get high quality design and build, but not the best specification for your money as you would from smaller manufacturers. This package however, is actually pretty fantastic value for money, with a decent CPU, a capacious hard disk and a very generous sized 19in TFT.


If you don’t want a large tower dominating your desk or the floor underneath it, you’ll probably prefer a notebook. However, a regular desktop PC of a similar specification will cost you less and therefore still has a place. And you may simply want to have the benefit of a larger screen, keyboard and mouse.


However, the case on this Acer is pleasingly compact, in the main thanks to the use of a microATX motherboard. Design wise, it’s quite attractive, with a futuristic sort of ‘Star Trek’ look to it (but in a good way) with a pleasing mix of silver and black combined with the seemingly obligatory blue lights. Fortunately, these are done tastefully, with a glowing power switch and the Aspire brand lit up from behind. Unfortunately, the look is spoilt somewhat by the presence of stickers for Windows XP, Athlon 64, and the nVidia graphics, not to mention the Windows code sticker and an Acer code sticker on the side as finally one listing the specifications on the front as well. Enough, with the stickers already! 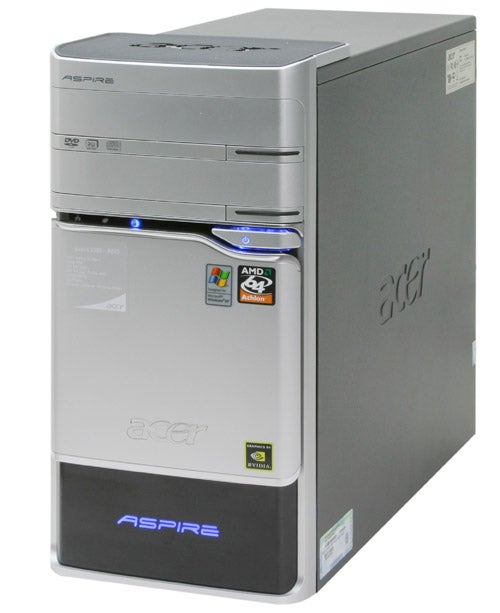 One oddity about the case is that Acer has rather bizarrely placed a rubberised pad, of the sort you see on foot stools in shoe shops. They don’t tend to feature the Acer logo though. I guess that if you place something on top it’s less likely to slide off.

The PC fascia features a sliding cover. The hardware activity lights are set in a narrow strip above this and the door curves pleasingly round the power button. In the down position the door reveals the 9-in-1 card reader set in an external 3.5in bay, while the one below it unoccupied. It also provides access to two USB 2.0 ports and headphone and microphone sockets, which is just where you want them. There’s also a four-pin DVI socket to accompany the six-pin DVI port at the rear. There’s also four more USB 2.0 sockets at the back as well as a Gigabit Ethernet port.


The sides of the fascia are rounded with rubber strips for the two external 5.25in bays. Only the top one is occupied with a Teac DVD Writer capable of burning dual-layer DVD+R discs at up to six speed and single layer discs at up to 16-speed. It’s a small niggle but when you eject the drive, the tray cover, partially blocks the button, so you’ll find yourself pushing the tray in itself to close it. 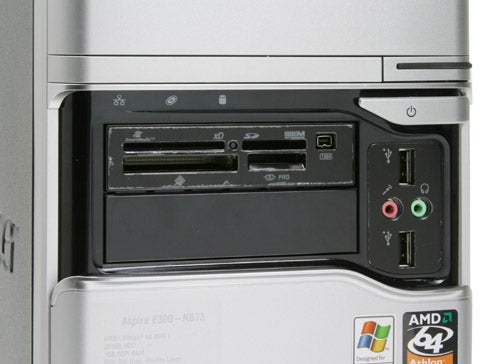 The second 5.25in external bay below this is empty however, so you won’t be able to do any direct disc to disc burning.


Permanent storage is taken care of by a Seagate Barracuda drive. Not only is the 200GB of disc space a good size but it’s a native SATA drive that offers NCQ and 8MB of cache and a spindle speed of 7,200rpm. Not bad.


Powering the PC is a 2.2GHz Athlon 64 3500+, a ‘Venice’ core CPU with 512Mb of level 2 cache. Acer offers a similar system featuring a 2GHz dual-core Athlon X2 3800+ but running Windows Media Center 2005 rather than Windows XP Home, like this system. A dual-core CPU would definitely have been preferable but it would have added to system cost. 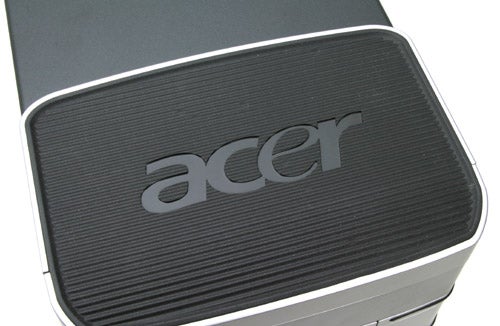 The CPU is backed with 1GHz of memory. This is supplied on two sticks of 512MB RAM, ensuring dual-channel operation but as there’s no extra memory slots, that’s your limit without swapping out both sticks.


On its web page Acer refers to this box as a ‘gamer’ system but I never like it when machines supplied with mid-range graphics cards are referred to as ‘gamer’ systems. Sure, you’ll be able to play the latest games on this machine, but you won’t be able to apply any serious levels of image enhancements such as FSAA and AF and the newest titles such as Fear, will make it sweat. More suited to the ‘casual’ gamer then.

Attached to the screen is perhaps the biggest selling point of the package – a 19in TFT. While most PCs around this price only offer 17in screens so the fact that Acer is a large supplier of LCD panels helps it get one over on its rivals here. The AL1951AS features a 1,280 x 1,024 CrystalBrite LCD screen and an 8ms response time, which will please the ‘gamers’, even if there are much lower response time screens now available. The DVI, VGA and audio-in sockets are all easily available round the rear. However, the monitor requires an external power brick. Image quality is good, with even backlighting and bright colours. 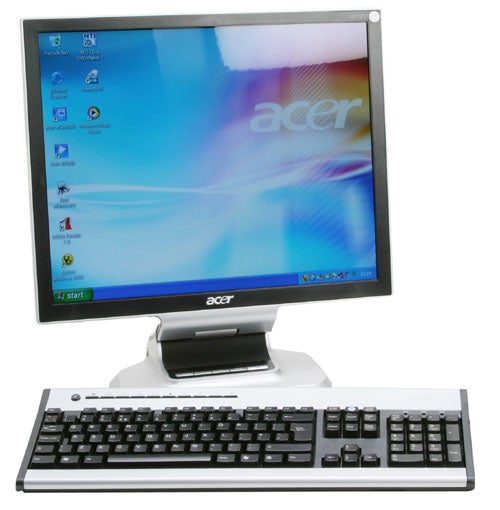 The base is quite interesting, as it integrates speakers with buttons for the OSD. The speakers quality isn’t going to blow your mind however, so Acer has supplied a set of Logitech S-100s. That said, these aren’t going to blow your socks off either as you might imagine for their size- that’s not going to please those ‘gamers’. The same goes for the audio with the Realtek ALC655 chip integrated onto the board. With only one spare PCI slot on the motherboard you’ll going to have to be careful with your upgrade choices. As it stands though, the integrated chip is capable of 5.1 output, though you’d obviously have to upgrade your speaker set to obtain this.


Internally, build quality is good. There’s plenty of internal 3.5in bays to add more hard drives but there’s no front fan supplied; only one at the back. Along with the CPU fan there’s also one on the chipset and one on the graphics card. So Acer hasn’t made any major efforts at serious noise reduction. This means that the system noise is noticeable, but the tone is such that it’s not too intrusive. 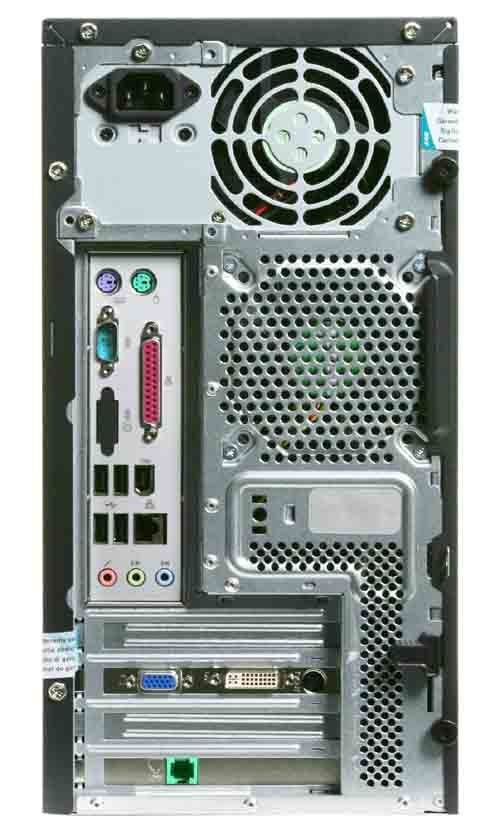 The keyboard and mouse are unusual looking, particularly the latter. The keyboard has a number of multimedia shortcut keys as well as a power down button but is well laid out and comfortable to type on. The mouse was fairly picky about the surface it was used on though, so I’d get hold of a good mouse mat.


All in all this is a very straightforward system. There’s no bleeding edge technology, but it is, perhaps more importantly, a well put together, sensibly priced PC.


It may be unspectacular, but as run-of-the-mill system’s go, this is state-of-the-art. The 19in display at this price is a standout so if you’re looking for a regular PC package, that’s compact, attractive, and performs well, this is a great choice.