With super-affordable laptops like the Dell Inspiron M101z and cut-throat competition putting ever more pressure on the netbook segment, manufacturers are increasingly trying to differentiate their offerings from the crowd. Some, such as the Samsung NF210, incorporate dual core processors, while others, like the N230, aim for long battery life. Toshiba daringly went away from X86-compatible hardware to produce the stunningly slim AC100, which also offered excellent battery life – but regrettably, its Android OS was just a little too limiting. However, with its newest Aspire D255 netbook, Acer gives you the choice to switch between both Android 2.1 and Windows 7.

You also get a dual-core N550 Atom processor running at 1.5GHz, though that’s where the D255’s differentiation from most other netbooks ends. So it’s back to the overly familiar 1GB of RAM, which is plenty for Android but barely adequate for Windows 7 Starter – this limitation really should be lifted by now. You also get a reasonably capacious 250GB hard drive and Intel’s rather underpowered GMA 3150 graphics. Thanks to the N550 CPU, multi-threaded applications will run considerably faster than on most netbooks and 720p video is no problem. However, only the most undemanding Full HD (1080p) video can be played and single-threaded programs (the vast majority still) won’t see a performance improvement.

Connectivity is also standard: three USB 2.0 ports, a VGA video output, SDHC/MMC card reader plus 3.5mm microphone and headphone jacks join a non-Gigabit Ethernet port in providing the basics, with Wi-Fi N and Bluetooth catering for wireless. Other bits include the webcam and microphone integrated in the 10.1in screen’s bezel.

Though it doesn’t exactly stand out, we’re cautiously impressed with the design. Our sample sports a fetching blue pastel colour set against white, but we’re afraid this will only be available in the US (where the D255-equivalent will be known as the Happy). On this side of the Atlantic, we have to settle for more traditional variations of black, white, red, blue and brown against a black body: so the majority of the netbook will be black regardless, but the lid and palm rest area will sport the colour of your choice. 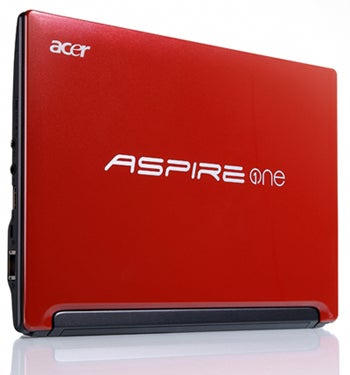 Here’s what this netbook will look like if you live in the UK rather than the US.

It’s an attractive mix, but the lid’s glossy nature means fingerprints will need to be wiped off frequently, and scratches will be more noticable. Thankfully, barring its reflective screen, the rest of the D255 sports a smooth, matt finish that’s feels pleasant and not so easy to mark.

Its lines are simple and well-defined, eschewing some of the more aggressive designs such as that of the NF210. It makes a very slim impression, helped by the same relatively low-capacity battery found in the D260, which also keeps weight at a light 1.25kg. Build quality is generally excellent, with some keyboard flex as the only minor niggle.

Getting to usability, the D255’s keyboard features large keys and a clear, logical layout which includes sensible shortcuts and (on the UK model at least) full-size Enter and right-Shift keys. Despite being inevitably shallow, key-feedback is good with a nice click. In fact our only complaint, and it’s one with Acer’s netbooks in general, is that the keyboard’s forward position leaves too little palm rest area, leaving your palms sitting uncomfortably on the netbook’s edge while typing.

Though small, the touchpad is sensitive and easy to use. It supports multi-touch and is subtly delineated from its surrounds by a transparent line to either side, maintaining the D255’s design uniformity; from most angles, the coloured section below the keyboard looks like a single whole. We’re not particularly enthusiastic about the pad’s buttons, however, which are integrated into a single rocker switch with a large dead-zone at its centre and slightly stiff action. 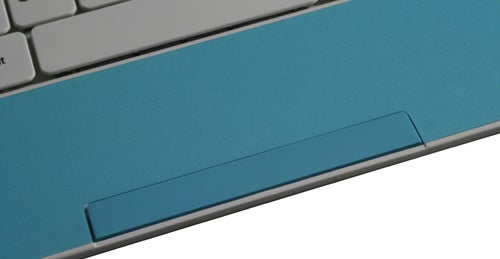 Being the usual 10.1in, 1,024 x 600 affair, this netbook’s screen holds few surprises. Its glossy coating leads to vibrant colours in addition to distracting reflections in a well-lit environment. For its ilk it already does a good job of dark detailing meaning you’ll get a decent level of detail in murky films. Sharpness is good if not the best we’ve come across, and backlighting fairly even with only some barely noticeable bleed along the panel’s right side. Banding is so minimal as to be practically invisible, and even horizontal viewing angles are decent enough if you angle the display right vertically.

Like its display, the D255’s speakers are competent enough. Though they can’t match the volume levels of a few recent rivals and lack any real bass, audio comes across fairly clear and without distortion. Adequate for YouTube and the occasional light film in other words, but anything more serious is better enjoyed using headphones.

As already mentioned, one of the highlights of Acer’s D255 is its dual-boot OS configuration. Unfortunately Android 2.1 suffers from the same limitations as Toshiba AC100: it’s a phone OS designed for touch-screen devices stuck on what is small laptop with no touch-screen. Nor did we find battery life improved much over running Windows (the AC100’s longevity was due to its use of low-power Nvidia Tegra hardware in conjunction with Google’s OS). With no access to the Android Market and even fewer pre-installed apps than the AC100, Android on this Acer can perhaps best be regarded as a glorified equivalent to the Quick-Boot Linux-based ‘instant on’ systems you get on a number of motherboards and notebooks, such as Asus’ Express Gate. 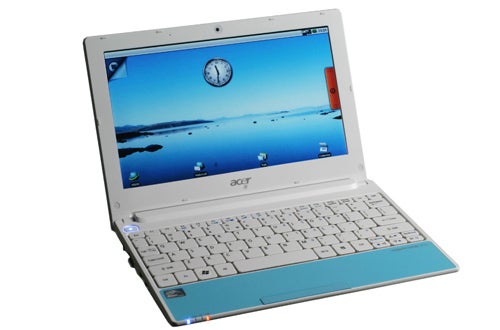 Indeed, booting into Android is very fast, taking a mere 15 seconds. This gives you access to a pretty decent interface for web-based activities such as browsing (Firefox is on hand, and works much like the Windows version) and email, as well as basic file management and media playback of music and photos (for videos and Adobe Flash it’s better to use Windows as otherwise the netbook’s components aren’t optimally utilised). Hitting a ‘peeled-back’ corner at the top left of the ‘home page’ will bring up a dialogue box asking if you want to boot into Windows, which at around 45 seconds takes almost as long as a cold boot. If you want to skip Android altogether, simply press F9 straight after powering the Acer on. 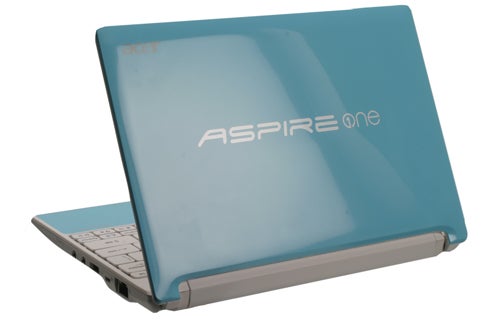 Most of you will probably be aware of the limits imposed on Windows 7 Starter. There’s no support for fast user switching or multiple monitors (which would be a theoretical possibility using something like the VillageTronic’s ViBook), no desktop Window Manager and, most pertinently for the average user, you can’t change the default wallpaper – though thankfully Acer’s choice here isn’t an eyesore. Aside from this it’s pretty much like running Windows 7 on any other kind of machine, offering a surprisingly smooth experience considering the specifications.

Battery life is merely adequate. We had hoped that Acer would increase the battery capacity to match this netbook’s slightly more power-hungry CPU, like Samsung did for its Samsung NF210. However, considering the D255 uses the same battery as the D260, it’s no surprise that it only managed five and a half hours in our video loop test with screen brightness at 50 percent and wireless radios turned off. 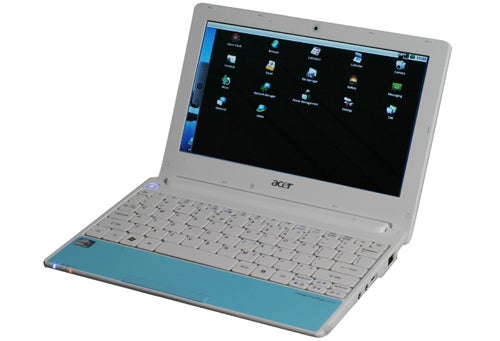 Though single-core models of the D255 with three and six-cell batteries are already available, our dual-core N550-equipped model hasn’t made it into retail quite yet. However, despite an MSRP of £279, it’s currently priced at around £300 for pre-orders, where it’s simply not worth the slight advantages it offers against the £230 D260 and similarly-priced rivals. If it comes down to around £270 it might be worth considering, but only for those who don’t mind its relatively short battery life.

Available in a wide range of colours, this compact and well-built Acer netbook offers not only dual-core computing but also the unique advantage of switching between Android and Windows 7 at will. Unfortunately, both Acer’s Android 2.1 implementation and the D255’s battery life in this configuration leave much to be desired, so at its current price you’re probably better off looking elsewhere.