Every new product needs an angle and the more superfluous, the greater the alarm bells. Happily, for Acer at least, its range of “Gemstone Blue” laptops has a very simple selling point, they’re the only 16:9 screen ratio laptops currently available. Why is this important? Because DVD and Blu-ray movies are mastered to anamophically fit a 16:9 aspect ratio screen, rather than the 16:10 ratio that most notebooks and PC desktop monitors favour. 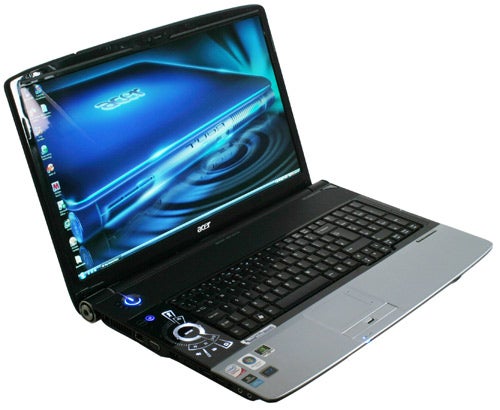 Available in both 16in and 18.4in varieties, we’re taking a look at the 18.4 version, the 8920G, today and it’s no shrinking violet. Measuring 441mm across, 300mm deep and 44.2mm thick it weighs 4.1 kilos and strikes an imposing figure on any desktop. Portable it certainly isn’t and it’s unlikely to move from one spot in the house, making it a genuine desktop replacement.


It has all the features for this role, too. We’ve got the top of range model for review and it’s available for between £1,300 and £1,400 depending on where you shop. Not a small amount no doubt, but you do get a lot for that money and there are other no less capable options coming in at the £1,000 mark and some even less. 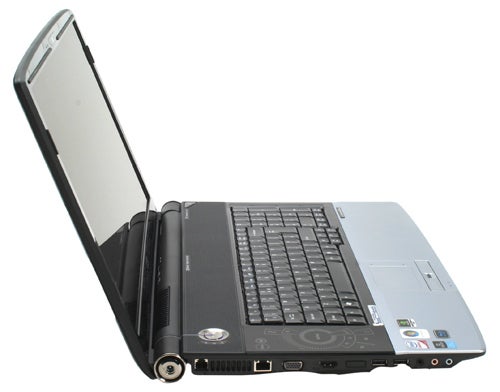 At the heart of things is an Intel Core 2 Duo T9300. It has two cores running at a brisk 2.5GHz with an 800MHz Front Side Bus and 6MB L2 Cache, the latter of which is particularly advantageous when processing a large number of images. You’ll also benefit from an ample 4GB of RAM, though with 32-bit Windows Vista Ultimate OS installed, not all of this will be used.


Headline features don’t end there. For storage you get two 320GB hard drives, 640GB total, graphics are powered by a 512MB nVidia 9650M GS, there’s Wireless-N Wi-Fi for seamless high definition content streaming, an HDMI output and let us not forget about the Blu-ray reader and DVD writer drive nestled in there. 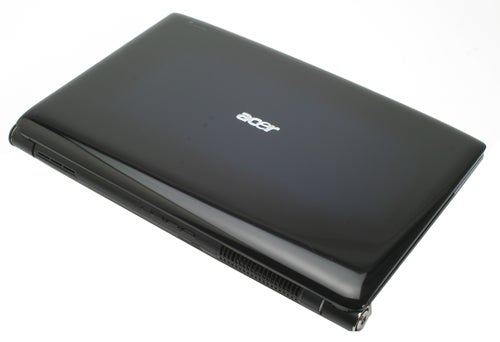 This works in tandem with the 18.4in screen which, as previously noted, has a film friendly 16:9 aspect ratio and an even more film friendly 1,920 x 1,080 Full HD resolution. To round off the full multimedia experience the latest Dolby Home Theatre technology is included, adding a new and very pleasant Natural Bass mode and new sound expander. In addition there’s support for a multitude of surround sound modes, including perennial favourite Dolby Headphone – its superb virtual surround headphone technology.

As you might expect there’s a full size keyboard with a numeric keypad. Unfortunately it’s not a very good one. Layout is generally fine, but the typing experience is very disappointing. There’s a significant level of flex across the whole keyboard and keys feel leaden and unresponsive, making typing quite arduous – a bit of a problem for a desktop replacement. 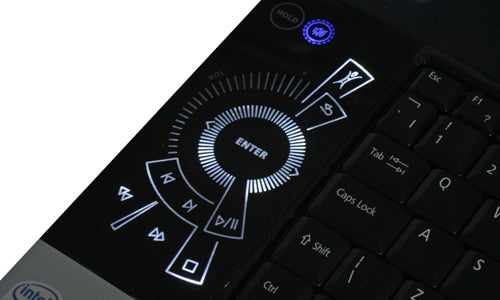 Multimedia, then, is clearly this machine’s real strength and to accentuate this, Acer has created what it calls the CineDash, a somewhat fussy looking set of media controls set to the left of the keyboard. When we first saw this and used it, it seemed like an interesting idea, but upon further use it does seem a little over designed. The volume slider arc, for example, is rather fiddly to use and one can’t help but think a novice user will be intimidated by the layout.


It also doesn’t add to the overall look to the machine and in truth the design is nothing to write home about. On the outside it doesn’t look too bad, in fact the dark blue gemstone finish and nifty “holographic” backlit logo is rather smart, but opening the machine reveals a rather less appetising sight. It’s not ugly per se, but the mixture of matte black at the top, a glossy black keyboard, grey wrist rest and the CineDash to the side looks messy and uncoordinated. 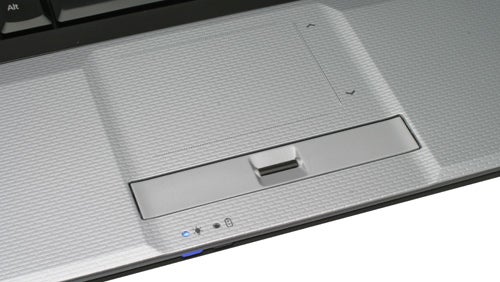 If the keyboard and design lack a little attention to detail, though, the features of this machine go some way to redressing the balance. Audio, for example, is truly exemplary – good enough that you could conceivably enjoy a film without the need for separate speakers. Inside its frame it houses six speakers, with three above the keyboard, two in the front edge and a “Tube CineBass” sub-woofer that’s housed in a hollowed out tube between the hinges.


This is, in effect, a 5.1 speaker system, though any pretence to surround sound is a complete misnomer. Nonetheless, the overall effect is very impressive, with clear crisp audio, particularly in dialogue thanks to the dedicated centre channel, though if you want heavy bass separate speakers are still the way to go.

This excellence is matched by the display. Its 16:9 ratio and Full HD resolution obviously helps, but it also sports excellent image quality. Colours are vibrant, if a little over saturated, bringing photos and video to life with great alacrity. Whites are particularly impressive, being very clean and bright and though black levels are nothing to write home about, they’re nonetheless pretty good for a notebook display. Viewing angles are reasonable, good enough that someone could sit alongside you and not be impeded and detail levels are very impressive for a screen that’s still relatively small for Full HD content.

As you might expect for a machine of this kind there’s a wealth of connectivity options. Starting on the left edge you’ll find both modem and Gigabit Ethernet ports. These are separated by an air vent and followed by the video connections, with both D-SUB and the obligatory HDMI output as well. Then there are a couple of USB ports and finally the audio jacks, which comprise a combined headphone and S/PDIF port, a microphone jack and a Line-in.

On the right you’ll find a 54mm ExpressCard slot, though regrettably there’s no mini-remote, the Blu-ray optical drive and a further two USB ports that bring the total up to an ample four in all. Set into the screen bezel is a 0.3-megapixel webcam and an integrated microphone.


Having poured some scorn on the keyboard, the touchpad is less contentious. It’s sunk into the chassis, as is the fashion these days, is well proportioned and has well marked scroll zones. Below, between the touch pad buttons, is a fingerprint reader and though it’s not the most convenient location it’s a useful addition.

There are, however, a few things that the 8920G lacks despite its otherwise ample feature set. Primary among them is a TV tuner and it’s a surprising omission. Indeed, though there are configurations that include TV tuners, they’re included in models that feature slower graphics cards, so if you want the extra horsepower provided by the 9650M GS provided here, you’ll have to go without – very odd.


More annoying is the lack of any kind of remote in the box. In a multimedia machine such as this it seems a fairly glaring omission, especially when even some smaller laptops have ExpressCard style remote controls included. 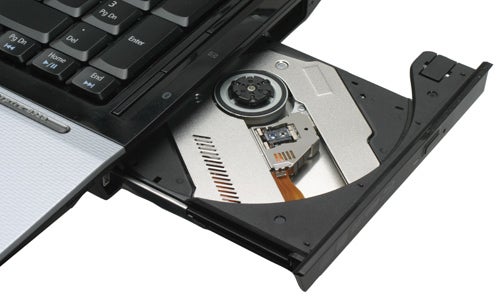 Software provided is adequate without any stand out additions. There’s a full version of Microsoft Works 8.5 and trial versions of both Office 2007 and McAfee Internet Security. All the basics for DVD authoring and Blu-ray playback are included, though Acer’s own brand utilities remain an acquired taste.

Given the generous specification you’d expect the 8920G to perform well and you shouldn’t be disappointed. It managed excellent results in PCMark Vantage, showing it should be able to deal with almost anything you throw at it. Likewise, results in our in-house tests showed it will deal very easily with video encoding and heavy image editing.

As for games, though the nVidia 9650M GS is better than many cards provided on notebooks, it’s no heavy hitter and will struggle if you want to play at the display’s native 1,920 x 1,080 resolution. Nonetheless, if you’re happy to turn the resolution down a little bit and restrict yourself to medium settings you should be able enjoy games like Call of Duty 4 with few difficulties.


One surprising element of the 8920G, though, was the battery life. With its high capacity eight-cell battery it managed just over two and half hours in the MobileMark 2007 Productivity test. Not bad for a machine this big and noticeably better than the Sony VAIO VGN-FZ31Z we reviewed a little while ago. Even the DVD playback test gave a result of over an hour and a half, not bad at full brightness on a large display.

Overall, the Acer Aspire 8920G is an interesting machine. That it’s the only 16:9 ratio Blu-ray notebook currently on the market gives a definite appeal and if this sounds like the answer to your prayers then it’s worth a dip, though you might consider getting the slightly cheaper but otherwise identical 500GB version or if you need it, one of the TV tuner versions.


There are a few niggles, however, that preclude it from an unqualified recommendation. Design wise it’s not the most attractive or well thought out and the keyboard in particular is very disappointing, denting its desktop replacement credentials somewhat. 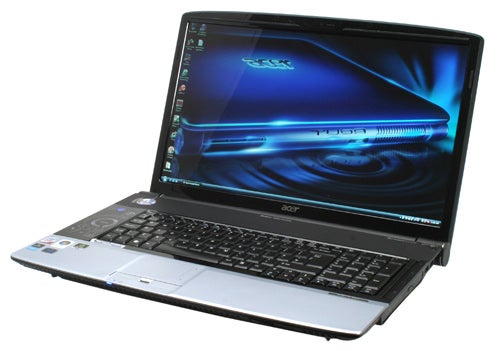 
Its clunky design and poor keyboard are disappointing, but the Acer Aspire 8920G delivers excellent performance and a very good film watching experience at a reasonable price. If this sounds like a good idea to you then its worth investigating further. 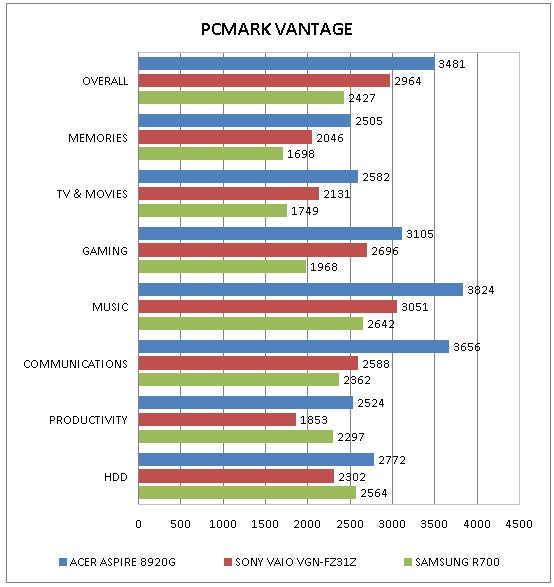 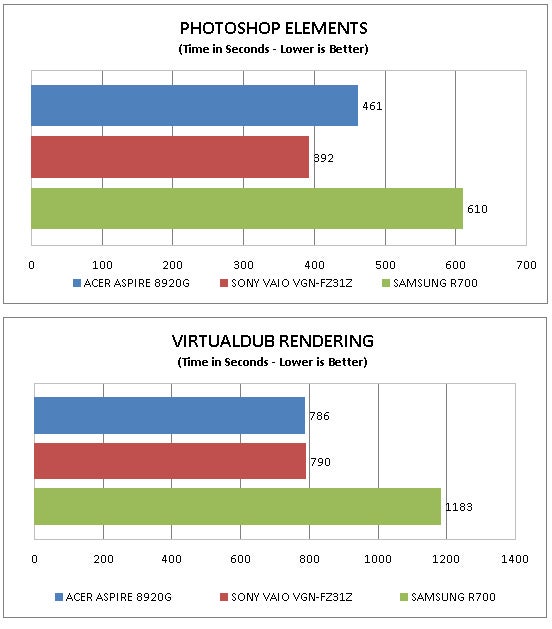 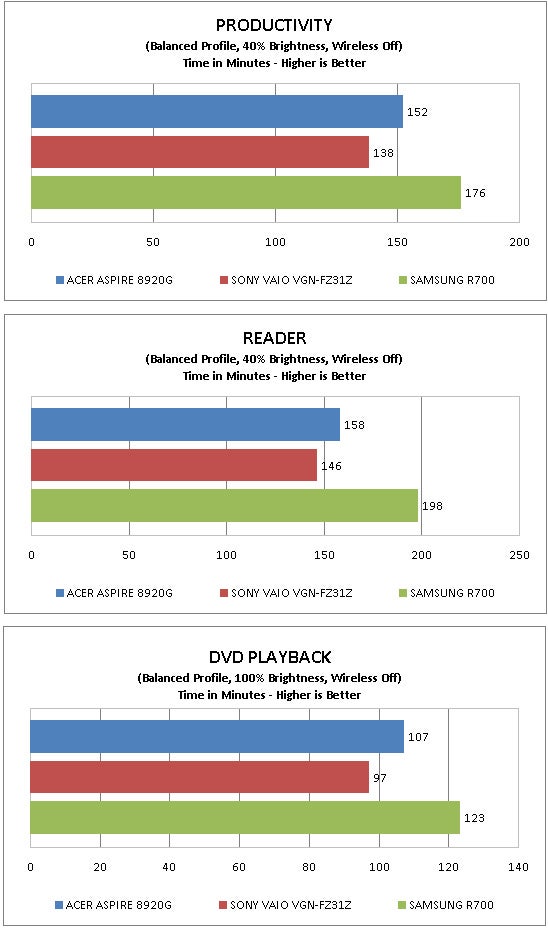