Every company has a niche. Dell has customisation, HP has style and funky imprint designs, Apple has hot-Air and Acer, our target today, has cheap prices. When we visited Acer’s Aspire range last it was for the launch of its Gemstone inspired design in the shape of Aspire 5920. It was a very capable machine too and was predictably competitively priced for what was a very well featured machine. It walked away with a well deserved Recommended Award, but can Acer repeat the trick with this 17in machine targeted at gamers? 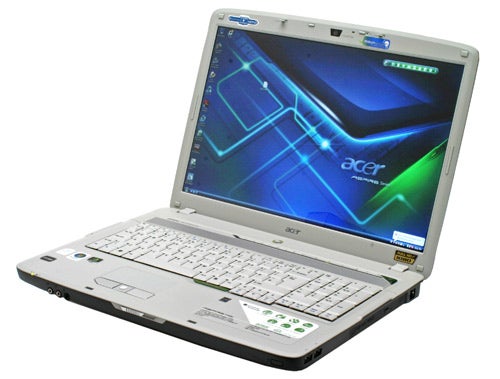 Dubbed the Aspire 7720G (model: 703G25Hn), it ought to be noted from the off that to call this a genuine gaming notebook is something of a misnomer. Housing a 512MB nVidia 8600M GT it does have ”some” gaming credentials, but only in so much as it’s more capable than your bog standard portable machine. Ultimately, with the 8600M GT, you’ll get some decent performance at medium detail settings in older and less demanding games but you’ll struggle to play more recent titles and you can forget straightaway about playing Crysis. Moreover, playing games at the 1,920 x 1,200 native resolution could prove a challenge, so in this respect the high resolution screen is something of a hindrance.


So, as a gaming notebook it’s more Sunday league pretender than full time pro, but does it have anything else going for it? As it happens, it does, because in typical Acer fashion it’s packed to the rafters with features at a price that’s more than slightly reasonable. Most notable in this respect is the combination of both the 1,920 x 1,200, Full HD capable display and an HD DVD-ROM drive, which still has some great titles on it despite its current status of HD format most likely not to win. 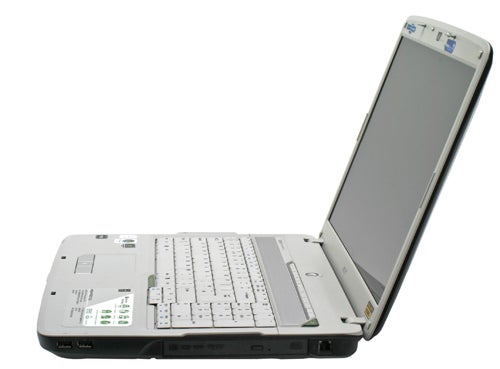 Now, you’d be reasonable to question the sanity of buying a notebook with an HD DVD drive now that the format appears to be losing the format war. However, there is a caveat because, even without said drive, this would be and is a very competitively priced machine. Indeed, given the specification, the HD DVD can practically qualify as value adding freebie.


Powering everything is a very quick Intel Core 2 Duo T7700, running at 2.4GHz with 4MB L2 Cache on-board and an 800MHz FSB (front side bus). There’s also 3GBs worth of DDR2 667MHz RAM, which is as much as Windows can handle before moving up to 64-bit, and a 250GB 5,400rpm SATA HDD. Throw in Dolby Home Theatre certified Realtek HD Audio, Draft N Wi-Fi, Bluetooth 2.0+ EDR and Gigabit Ethernet as well and you have a recipe for a very well featured and multi-talented machine.

Of course, being a 17in chassis means the 7720G also has all the ingredients of a desktop replacement. It features a full size keyboard with a 10-digit number pad to the right of the main keys. It’s a pretty decent layout too, not succumbing to some of the more annoying problems you find on some notebooks that add a number pad to the equation. As such, there’s a proper size Return key and Right Shift key, while the cursor keys are offset just below these to keep them out of the way. 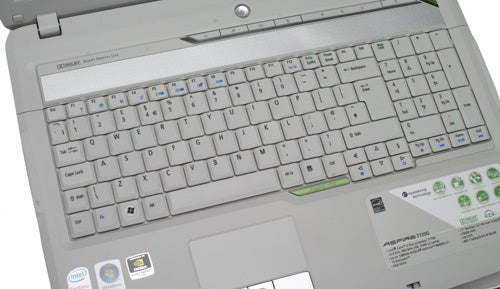 However, despite a generally decent layout, the keyboard as a whole is distinctly mediocre. Keys have a shallow, unresponsive and slightly heavy feeling to them and there is some level of flex as well. As ever, these are issues one could get used to but as a whole you’ll certainly find better typing experiences on a laptop from any Dell, HP or any other notable manufacturer for that matter.


Happily, other elements of the design produce fewer complaints. The glossy black ‘Gemstone’ lid is still a pleasing look that belies the relative value of the product, while the smooth ceramic internal finish, though an acquired taste, still adds something definably unique. Naturally, it’s fairly big and bulky, measuring 404 x 298 x 38~43mm (WxDxH), but with the 6-cell battery the 3.62kg weight isn’t too bad given the size.

Again, though, there are multitude of annoying niggles that etch away and just make you wonder, why? Take connectivity, which is by and large excellent apart from the fact that instead of an HDMI port you get a Dual-Link DVI port. Great if you want to connect to a monitor but not so great for a TV, which would be the more likely usage given the inclusion of an HD DVD drive. One would presume this is a cost saving measure since it would cost less to install a DVI port than an HDMI, but this is one area where cost cutting would have been best avoided.


It is in these sorts of areas that the Acer’s value orientated focus is revealed. It’s a fact underlined by the display because, though the resolution is very favourable, the panel doesn’t do HD content justice, lacking a decent black level or any real colour vibrancy. As a result, pictures look dull and uninteresting and though everything looks sharp enough, a screen this size will never bring out the detail of a high definition source. 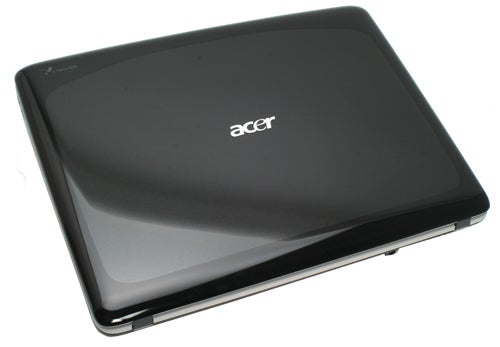 Slightly more successful, however, are the speakers, with the normal stereo speakers and a mid-range “subwoofer” underneath the notebook combining to good effect. In this respect the inclusion of Dolby Home Theatre, a feature of all Acer’s consumer notebooks, also helps, widening the soundstage during films and creating a far more immersive sound.

Despite the lack of HDMI the Aspire 7720G is also well endowed when it comes to connectivity, with a decent selection of USB ports, a card reader and plenty of video outputs too.

Thus, on the left edge, you’ll find D-SUB and the DVI, followed by the Ethernet pot, two USB ports, an S-Video Out, 4-pin FireWire, a 54mm Express Card slot and the aforementioned Card Reader, which supports SD, MMC, Memory Stick/Pro and xD card formats. There’s also a small volume control dial, which is always a useful and welcome addition.


All audio connections can be found on the front, with a dedicated Headphone jack, Microphone/Line-In and a combined Speaker and S/PDIF. There’s also an Infrared port, which could be used in conjunction with a remote, though none is supplied.

Finally, on the right edge, there are a further two USB ports, with the rest of the space taken up by the HD DVD drive and a modem port. Another feature worth noting is the 0.3 Megapixel camera, which is integrated into the bezel surrounding the screen. It’s a solid enough effort and should suffice for most purposes, though an external microphone might be a good idea if you’re a regular video chat user.


As is typical, there’s a lot of pre-installed software to contend with as well. Acer’s ‘Empowering Technology’ suite isn’t too bad compared to Toshiba’s truly woeful Flash Cards, though that isn’t saying all that much. Indeed, all of the Acer branded software, such as Arcade Deluxe and GridVista, is distinctly ordinary and you’re better off using Windows’ own software in most instances.

In addition to Acer’s own software solutions you get Cyberlink Power Producer, NTI Backup NOW! 4.7, Norton Internet Security, with 90 days worth of free updates, and the ubiquitous Microsoft Works 8.0, while there’s also a free 60 day trial of Office 2007.

For performance testing the Acer Aspire 7720G was put through a number of tests, including PCMark 05, PCMark Vantage, our in-house Photoshop Elements and Virtual Dub rendering tests and MobileMark 2007 battery tests. For gaming testing Counter-Strike and Prey were used at various settings, providing a realistic idea of what kind of gaming performance you can expect. 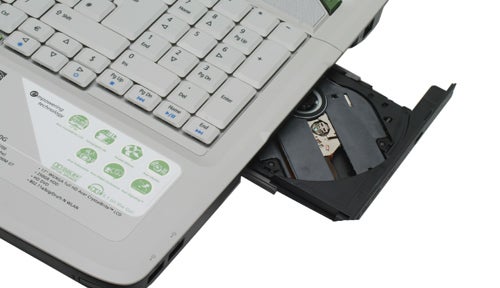 On the whole results were encouraging, with the Acer proving just as quick as its specification would suggest and ensuring that whatever you throw at it should be dealt with okay. Moreover, although this system lacks dual-channel support due to its use of 2GB and 1GB modules to produce the 3GB memory total, this doesn’t have a dramatic effect on performance, with any disparity in results compared to the Rock X770 T7700 likely due to its faster hard disk drive.


Unsurprisingly, gaming performance was a mixed affair. You’re unlikely to be able to play the majority of games at the 1,920 x 1,200 native resolution and even at 1,680 x 1,050 you’ll need to make some compromises to get smooth frame rates. Overall, it’s solid but by no means spectacular and will age quickly as new titles come out over the year. As such, purchasing this as a gaming machine is probably a bad idea.

Likewise, though this is less of an issue for a machine of this size, battery life is fairly ordinary. In the Reader test, a low intensity test, it manages around two hours depending on the power profile used, which is just about sufficient. However, turn up the brightness and play a DVD and battery life quickly plummets, with the 7720G managing only 74 minutes. In any case, as with any machine of this size, you won’t be venturing too far away from a mains plug.


Overall, the Acer Aspire 7720G generates mixed but generally favourable opinions. For the price it’s hard to deny you’re getting a lot for your money, but there are issues that make it less than ideal depending on what usage you require. As a gaming machine it’s a lightweight, which will quickly become defunct over the year to come. However, as a desktop replacement and entertainment PC it has some value, despite the lack of HDMI, a TV Tuner or the fact the HD DVD drive may become an anachronism come the end of the year. 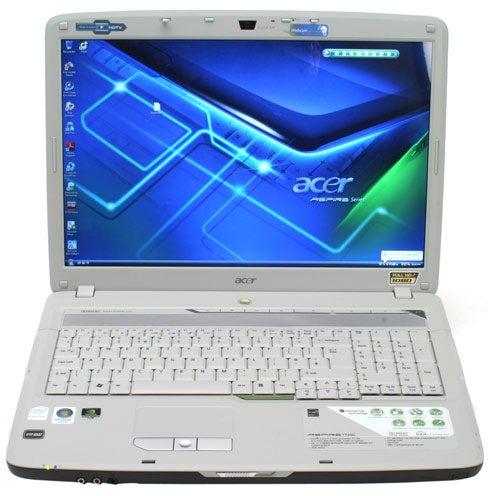 
Offering good value and a great specification, the Acer Aspire 7720G is let down by some annoying niggles; a mediocre display and an overall impression that it doesn’t sit quite right anywhere. It’s not a real gaming machine and though it’s a good entertainment PC, it’s by no means perfect. Despite these reservations, if it addresses your needs you’re getting a very fast notebook for your money. 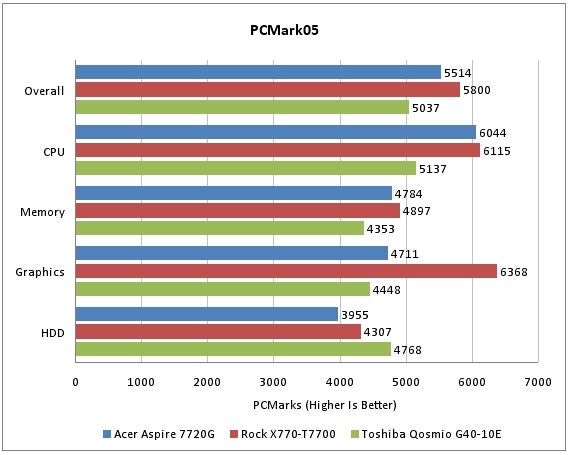 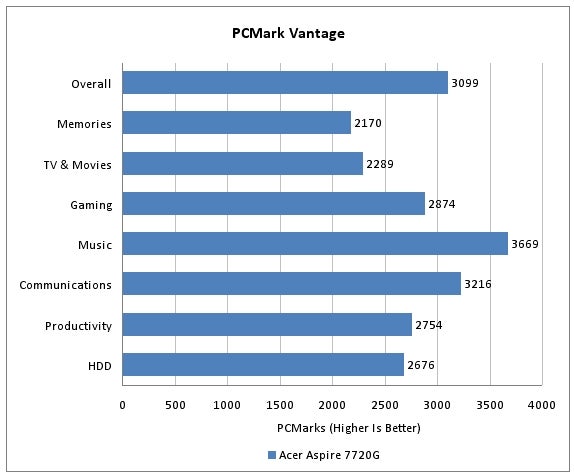 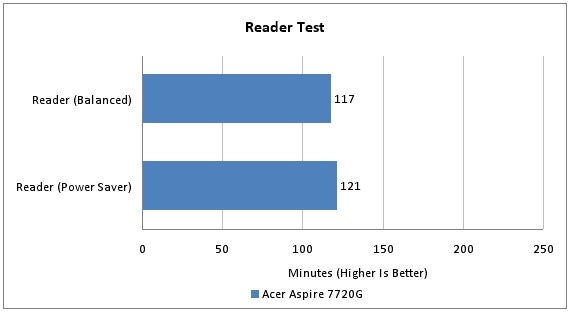 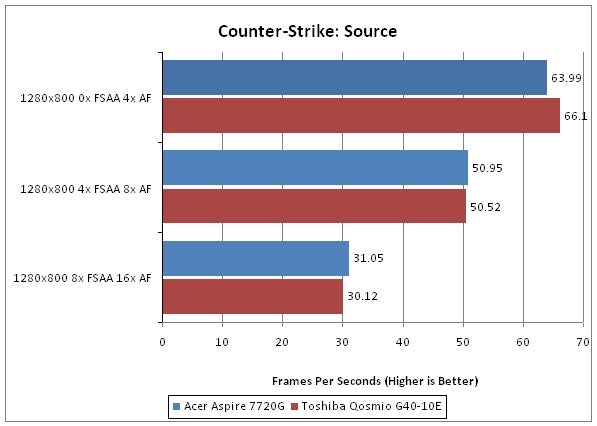 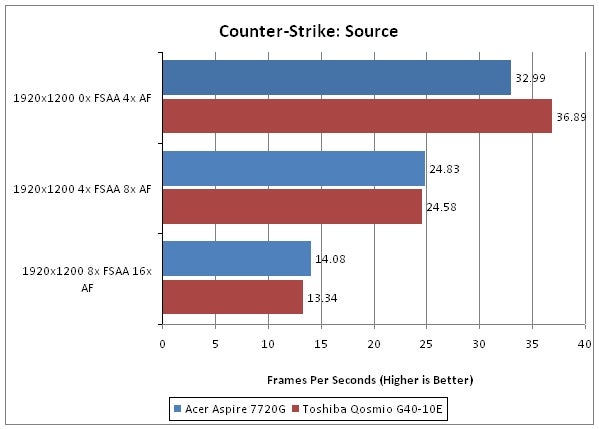 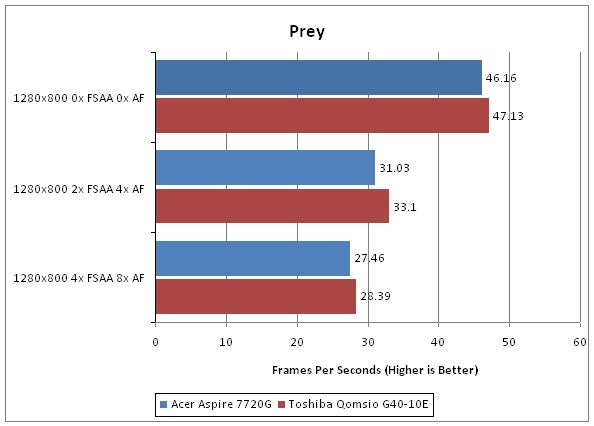 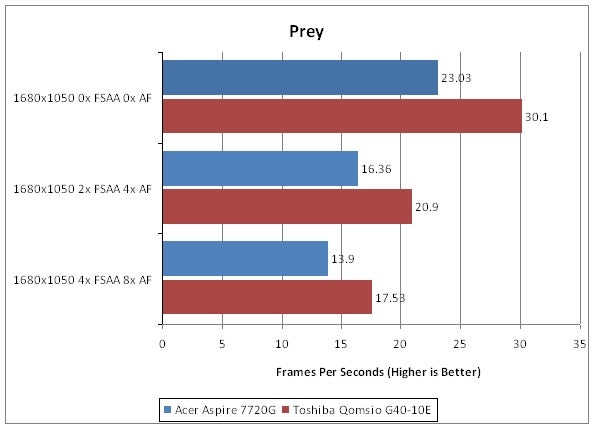 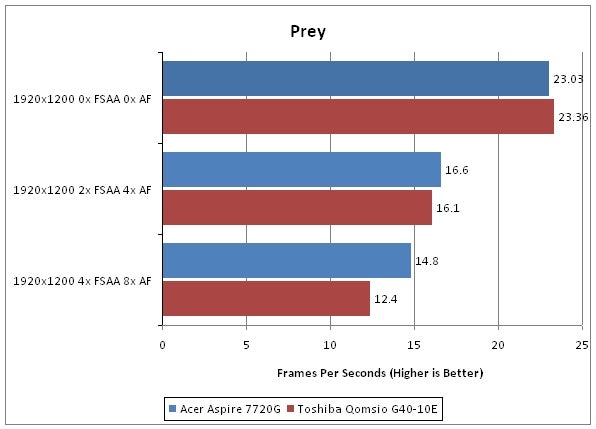