Acer is, in many ways, the sleeping giant of computing. It might lack a little of the brand recognition of Dell or HP, but in recent times it has snuck up upon both to grab a convincing third place in the personal computer market and is the market leader in many territories. A lot of this success can be attributed to some seriously competitive pricing since, if you’re looking for a bargain, an Acer is always a good place to start. 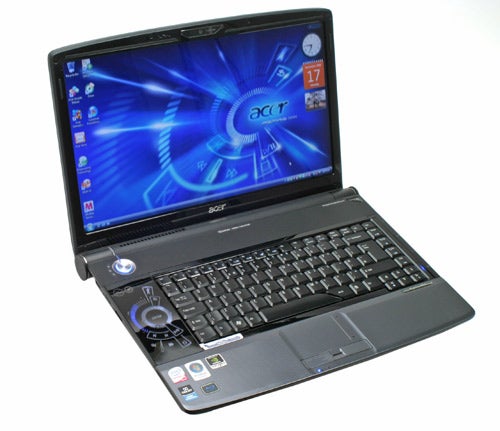 As is the case with its latest effort, the Aspire 6935G; a Centrino 2 refresh for its Gemstone Blue range that launched in April. Based on a 16:9 aspect ratio 16in display, the version we have here manages to cram every conceivable feature into its desktop replacing frame, including a Blu-ray drive, a digital/analogue TV Tuner and Dolby Home Theatre audio while still slipping comfortably below the £1,000 barrier, costing just £910 after the VAT cut.


This is a pretty good effort and it’s not as if Acer has skimped on other features, either. Powering it all is an Intel Core 2 Duo P8400 running at 2.26GHz. This is backed by 4GB 800MHz DDR2 RAM and there’s a fast 7,200rpm 320GB hard drive. Graphics come courtesy of an nVidia 9600M GT with 512MB dedicated memory, which powers the 1,366 x 768 resolution display that, being 16:9, is ideally suited to watching films and other content intended for TVs. 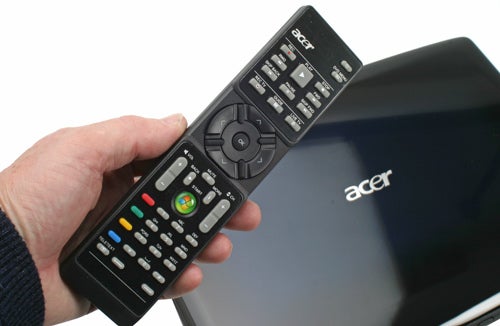 You also benefit from all the usual trimmings, including Draft-N Wi-Fi courtesy of Intel, Gigabit Ethernet and Bluetooth 2.0+ EDR. Also included in the box is a remote control. This isn’t the ExpressCard style effort we seen in some laptops, but a proper fully fledged media remote. This is obviously ideal given the machine has a TV Tuner, making armchair use that bit easier. It’s a good remote, too, with a logical layout and a particularly good four-way pad with a very positive button mechanism. This is true throughout so this isn’t the kind of included remote you’ll be replacing straightaway, quite the opposite in fact.


The remote is joined by something we’ve seen before when we reviewed the Acer Aspire 8920G, the 18.4in variety of this range; the Acer CineDash. This rather lofty title is given to the slightly intimidating backlit media controls that sit to the left of the keyboard. These are well tailored for controlling Media Center, are responsive and in some ways quite intuitively arranged, especially the volume arc. However, we’re still not totally convinced that they’re needed. Eye-catching it all may be, but when sitting at the machine why wouldn’t one use the cursor keys and the Enter key instead of the CineDash and couldn’t something simpler do the job just as well? 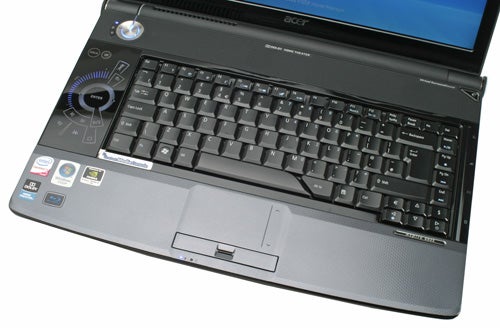 This is particularly relevant given that its presence means an ever so slightly off centre orientation for the keyboard. It’s something one gets used to, but if you’re forced to accept something like this we’d sooner have a useful feature, like a full numeric keypad. Happily the keyboard itself isn’t too bad. Keys feel firm and positive while the layout doesn’t feature any of the annoying quirks we often cite on notebooks.

In terms design nothing much has changed since the inception of the Gemstone Blue line. There’s the rather fetching dark blue and black ‘gemstone’ lid, while inside the body is finished in combination of glossy black plastic, matte plastic covering the speakers and a soft-touch textured palm rest and touchpad area. 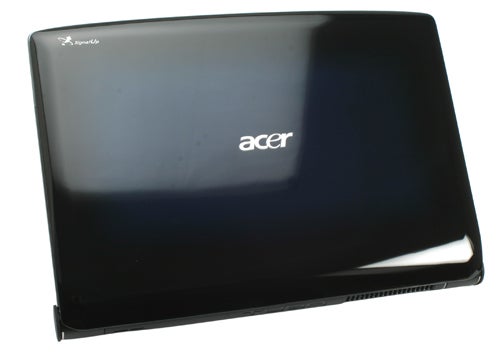 In fact this is subject to the only real change because whereas the first generation of this line had light grey palm rests, the 6935G has a darker more metallic looking finish. It’s only a small change but it instantly lends the machine a more attractive and cohesive appearance compared to the slightly jarring mixture of previous models.


Inset into this palm rest is the touchpad. A dip signifies the extremities, while a slightly elevated vertical line cordons off the vertical scroll zone. We found the touchpad particularly nice to use thanks to the soft-touch finish and dimpled texture and the buttons below it produced no complaints. Like a few consumer notebooks of late there’s a fingerprint reader wedged between the two buttons, too.

No complaints can be made of connectivity, either, since the 6935G features more or less everything you’d demand from a desktop replacement and entertainment PC. There’s an HDMI output, an S/PDIF capable audio output, an infrared sensor for the included remote and a combined USB/e-SATA port among four USB ports in total. Another nice touch is the lock slot that’s integrated into the hinge section of the machine, something that also houses a sub-woofer (aka Acer Tube CineBass) and an air intake.


Being an entertainment machine it should come as no surprise to discover the 6935G makes a feature of its audio. Unlike the larger 8920G it only features two, rather than four, drivers along with the sub-woofer, but they still manage to produce a mildly convincing soundscape and no discernable distortion at high volumes, thanks in no small part to Dolby’s virtual surround technology – something you still benefit from if you plug your own speakers in. As is our habit, we must also mention the benefits of Dolby Headphone; it never fails to improve our experience of film watching with even an average set of headphones.

Continuing the cinematic emphasis is the 16:9 aspect screen. At 1,368 x 768 it’s not Full HD, but arguably you wouldn’t see the benefit of 1080p at this size and this effort is plenty sharp enough to enjoy a Blu-ray film, or a DVD, with good clarity. Colour fidelity is pretty good, too, though viewing angles are a little shallower than we’d ideally desire. This is less of a problem with a more personal machine like the 6935G – 16in being little more than 15.4in when you think about it – but as witnessed on the Toshiba Qosmio G50-115, it is a problem if more than two or three people want to view the same screen at the same time.

Beyond the frippery of looks and features, you should encounter no qualms with how the 6935G performs. In PC Mark Vantage it compares very well to both the HP Pavilion dv7-1000ea and the Dell Studio 15, mainly due to the boost provided by that faster 7,200rpm hard drive. This is reflected most in the in the Music, Gaming and HDD tests and though our in-house tests showed the Studio 15 pulling out a small advantage, this line has since been updated to use the exact same processor as found in the 6935G. 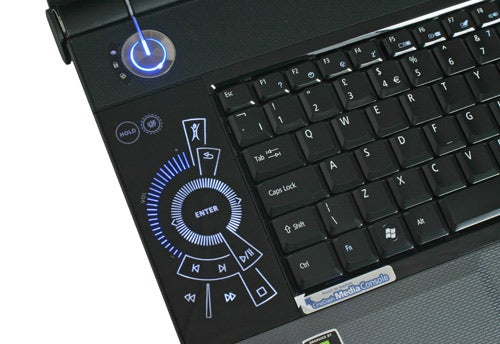 Battery life, on the other hand, isn’t a strong point. In the productivity segment of MobileMark 2007 the 6935G managed a below-par two hours and 28 minutes and it didn’t even manage more than three hours in the lower intensity reader test. Both these results fall well below either the 17in HP or the Dell Studio 15, though the Acer does claw things back somewhat in the DVD playback test with a result just under two hours, only four minutes less than the HP. 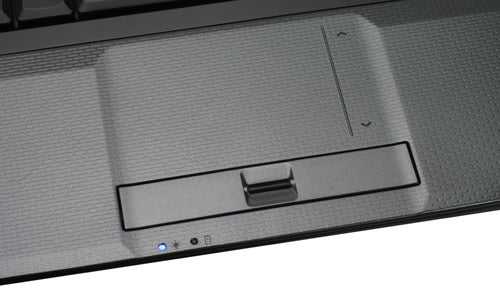 You should be able to play some games at reasonable settings as well. In TrackMania Nations Forever it manages to produce frame rates in the mid-thirties at medium detail settings, so you should be ok with most titles provided you disable any anti-aliasing and post processing effects.


All told we can find very few reasons not to recommend the 6935G. It might lack the elegance of offerings from Dell or HP, but the basic specification and design are strong and the feature set is superb given the sub-£1,000 price point. This makes it ideal as an all-round desktop replacement that won’t completely dominate the room, as an 18.4in does, as well as providing some level of portability so you can enjoy your entertainment anywhere in the home. 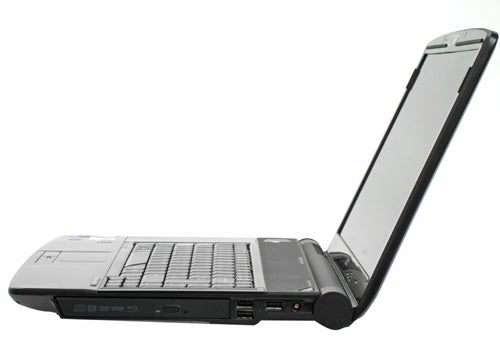 
Acer’s Aspire 6935G does all the things you could demand of an entertainment notebook at a very attractive price, making this one of the sounder purchases one can make this Christmas.