Blu-ray is far from a ubiquitous feature on laptops, but even Toshiba has finally realised that any ‘multimedia’ laptop should have it as standard. Acer has long offered it in its range and the Acer Aspire 5942G (524G64Bn), a 15.6in desktop replacement machine, is its latest effort. It also packs one of Intel’s new mobile Core i5 processors which, among other things, gives it a hefty £940 online asking price.


As ever with Acer, however, the 5942G represents excellent value once you tot up all the features. Notwithstanding the Intel Core i5-520M processor – its two cores ticking along at a brisk 2.4GHz – and the Blu-ray drive, it also offers an extremely capacious 640GB hard drive, 4GB of 1,066MHz DDR3 RAM and a decent ATI Mobility Radeon 5650 graphics card with 1GB of dedicated memory.


There’s more, too. Dolby Home Theatre audio processing is included, as are Gigabit Ethernet, Wireless-N Wi-Fi and Bluetooth 2.1+ EDR. You even get that laptop fashion item of the moment: a backlit keyboard. Throw in a fingerprint reader, HDMI and some excellent connection options and the 5942G looks to offer unrivalled value for the spec. 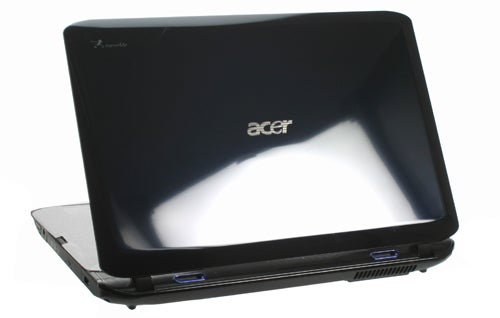 It’s not without its compromises, mind. Despite featuring a Blu-ray drive you only get a fairly standard 1,366 x 768 resolution display. Acer tries to enhance this with what it calls the ‘CineBoost Color Engine’, but it’s the very definition of a ‘show room’ feature. While it does ‘boost’ primary colours to create an artificially vibrant appearance, it does this at the loss of any detail at both the dark and bright ends of the scale. Luckily it can be deactivated easily via a touch-sensitive button on the bezel, besides which sits a useful on/off button for the whole display.


Neither is this a design marvel. Its combination of near black, slightly blue lid and glossy black highlights hardly breaks new ground, while the mish-mash of different materials and unsightly seams is somewhat typical of Acer’s approach to laptop design. It’s far from an ugly machine, though, and Acer can be commended for using less of the dreaded glossy plastic than the likes of Toshiba or HP. 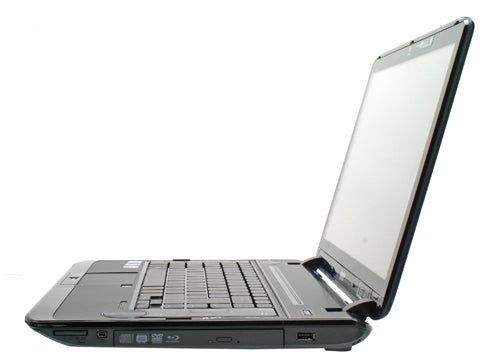 Subjectively it seems a well screwed together system, too. Good quality plastics are used throughout and the two hinges are chunky, holding the 15.6in display firmly in place. We can’t say how it might fare through prolonged use, but our retail review unit didn’t exhibit any obvious weaknesses or potential faults.

Looking around the system reveals all the connectivity you could ever want from a multimedia laptop. Naturally an HDMI port is present, as is VGA, and they are joined by a trio of audio jacks: one headphone jack; one microphone jack, and one line-out/SPDIF output. There’s also an infrared (CIR) receiver on the front edge, though its positioning is far from optimal for easy line of sight and Acer doesn’t provide a remote itself.

Other sundries include a 54mm ExpressCard slot, a mini-FireWire port, memory card reader and the ever present Ethernet port. You get four USB ports in total: three standalone ports and one that doubles as an eSATA connection for faster data transfer from compatible external hard drives/memory keys. A webcam is mounted in the screen’s bezel. It’s a decent effort and is capable of recording 720p video at 30 frames per second (fps).

All this connectivity certainly helps boost those multimedia credentials, but the 15.6in display does let the side down somewhat. It’s no better or worse than similar displays on dozens of other laptops, but given the Blu-ray drive it’s a little disappointing. Without the ghastly CineBoost mode, which we’ve already talked about, its colour production is fairly flat and unexciting and it struggles to bring out detail in dark scenes. Viewing angles are also quite shallow. It’ll do for modest demands, but anyone with more discerning taste will be left disappointed.


Audio brings more reason for cheer. Despite relying on simple stereo speakers with no assistance from a supplementary ‘sub’, the 5942G produces crisp, distortion-free audio at more than reasonable volumes. Bass, unsurprisingly, isn’t prodigious, but there’s more than enough richness to satisfy most people. 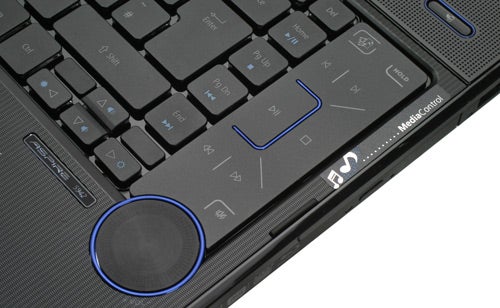 Acer also looks to enhance the media experience further with a bank of media controls to the right of the keyboard. Easily the best element of this arrangement is the volume dial, which is a pleasure to use. Unfortunately the touch-sensitive buttons themselves are a bit hit and miss. They’re logically arranged but require a firmer prod than you’d expect for ‘touch’ buttons. Their presence also shifts the keyboard slightly off-centre, which takes a little getting used to.


Consequently there’s a short period of adjustment of go through before typing feels comfortable on the 5942G. Luckily the layout is intelligent, so there are no barriers to hurdle there. The keys also offer pleasing feedback despite feeling a tad slippery. 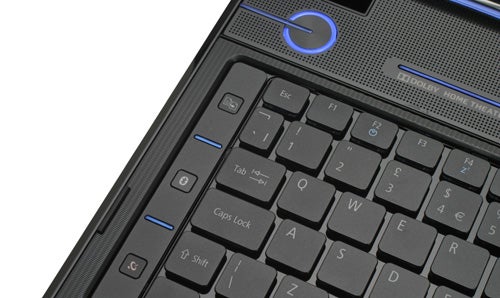 There are three further shortcut buttons to the left of the keyboard, including separate buttons for toggling Wi-Fi and Bluetooth, and one further one to launch Acer’s Backup Manager. Below the keyboard is a well proportioned, smooth touchpad offering the now ubiquitous – though not overly useful on Windows – multi-touch support. Its two buttons, between which sits a handy fingerprint reader, offer decent feedback and there’s a dedicated button for switching off the touchpad as well.

Given the hardware the 5942G touts, we were expecting some impressive performance and sure enough we weren’t disappointed. Compared to the HP Envy 15-1060ea and Toshiba Satellite X500-10T, both of which came with 1.6GHz quad-core Core i7 CPUs, the Acer matched them all the way in PCMark Vantage. In fact it actually achieved a higher overall score than both, though this is largely due to a somewhat overinflated result in one of the tests. 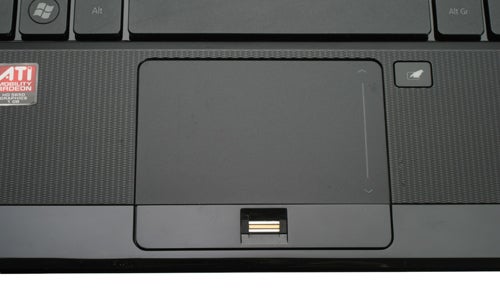 Initially we were perplexed by this anomaly, but a little detective work uncovered that the Core i5-520M has a new set of AES instructions that markedly improve the speed of applications performing encryption and decryption – actions which form a major part of the affected ‘Communications’ phase in the benchmark. This is obviously great if you do a lot of either, but most consumers probably won’t see the benefit that often.


Another thing that helps the overall performance is the use of a 64-bit version of Windows 7 Home Premium, which can address all of the 4GB of DDR3 RAM. This ample system memory helps in applications and games, which are also aided by the ATI Mobility Radeon HD 5650 that has 1GB of its own memory.

This chip is best described as a mid-range/entry-level gaming card, so it’s not going to tackle ”Crysis” too easily, but it gets the job done. In our tests it produced a brisk 77.3fps in ”Trackmania Nations” and averaged a decent 34.9fps across the four tests in ”S.T.A.L.K.E.R: Call of Pripyat” – both enough to call this a reasonable gaming machine.


When dealing with larger laptops like this, battery life becomes a lot less important. Nonetheless the 5942G does okay here, returning a creditable three hours in the MobileMark 2007 Productivity test and just short of two hours in the DVD playback test. Given this machine weighs 3.05kg it’s not going to venture far from a wall socket, making both these results more than good enough. 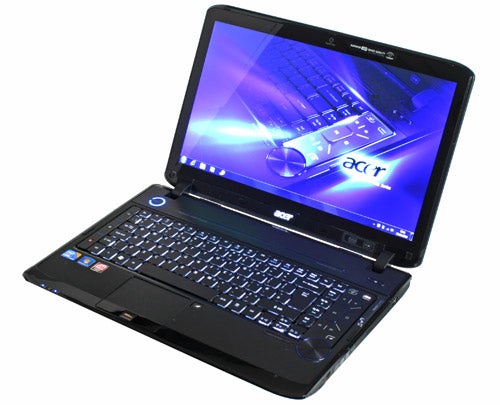 
Aside from the merely average display, the Acer Aspire 5942G offers the performance and features of a laptop that could cost a lot more. If you’re after a high-performance Blu-ray laptop and aren’t too concerned about having a top-notch screen to go with it, it’s a great value option.

The Acer Aspire 5942G is currently available from SaveOnLaptops.

Update: Graphics is infact, as stated in the review, an ATI Mobility Radeon HD 5650, not a 5850 as written in the feature table.

(centre)You should have no problem with performance from the 5942G. Its Core i5 processor will romp through pretty much anything.(/centre)

(centre)While not a gaming laptop outright, the 5942G still has enough gumption to play modern titles at reasonable settings.(/centre)

(centre)Battery life isn’t a priority in a machine like this, but the Acer still performs well here.(/centre)