Having listened to an Acer representative gush about the design of its new Aspire series at its recent product launch, it struck me that the company hasn’t necessarily been renowned for excellence in this area. Its monitors immediately spring to mind, with the likes of the AL2623W 26in display, and AL2216w 22in display, not demonstrating a great deal of panache. It must be conceded, however, that in this case Acer has good reason to gush. 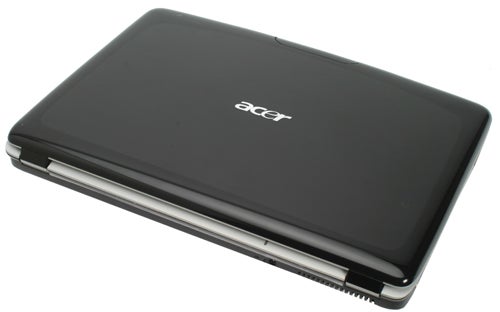 Designed under commission by BMW Designworks, the new Aspire range utilises a ‘Gemstone’ design focus that has generated a distinctive and unique look. On the outside one can genuinely see that ‘Gemstone’ idea in the shape and finish. Though the notebook is obviously rectangular in shape, the subtle use of curves gives it a pleasant oval shaped quality, and the shiny pearlescent black finishes off the look beautifully. Importantly, this gives the 5920 a real sense of quality before you’ve even opened it up and started using it.


Inside things are less dramatic, but no less lacking in quality. Acer has chosen to go for a beige/cream coloured ceramic style finish, which I, for one, rather like. It provides a high quality, but different, look and feel and adds a welcome sense of lightness compared to the dark exterior. Some may find it an acquired taste, but given time it grows on you. 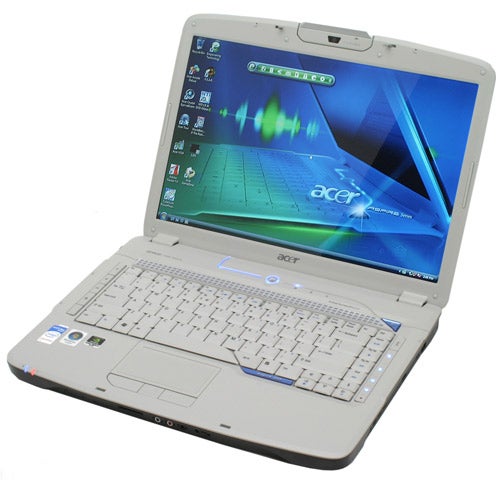 The inside is also punctuated by continued attention to detail. Although our sample came with a US keyboard layout there can be few complaints. It’s very rare that one comes across a notebook keyboard that doesn’t garner some kind of complaint, but this is one such occasion. It avoids all the common pitfalls; the left-hand Ctrl key is in its proper place on the far left, both Shift keys are of a good size as are the Return and Backspace keys. Similarly, the keys themselves are crisp, light and even.


Either side of the keyboard are shortcut keys, with media playback keys on the right and miscellaneous functions such as Wireless, Internet, Mail and Bluetooth on the left. Interestingly the media keys on the right use an unusual touch sensitive mechanism, the sensitivity of which can be set using the provided software. It’s just as well you can adjust the sensitivity too because at the wrong settings it can be very easy to activate them accidentally, which is never a good thing.

Other neat touches include USB logos on either side which indicate where the USB ports are, as well as a middle click button that doubles as a scroll wheel, and the 0.3 Megapixel camera that’s cleverly integrated into the clip for the lid. These are all part of the greater design ethic of the Aspire range, and in this it’s very successful.

So design is obviously a key part of the new Aspire’s appeal, but that doesn’t mean performance and functionality has taken a back seat. Indeed, the Aspire 5920 continues to impress in this area too with an excellent specification. At the core is a new Santa Rosa certified Core 2 Duo T7300 2.0GHz CPU, with 800MHz Front Side Bus. This is the third fastest of the four new Santa Rosa Core 2 Duo’s, but that doesn’t mean it isn’t capable – as our test results bore out. Though the 5920 does trail both the Evesham Zieo N500-HD and Asus A7S in the PC Mark 05 CPU test, it still manages a solid overall score thanks to superior HDD scores and good general performance. 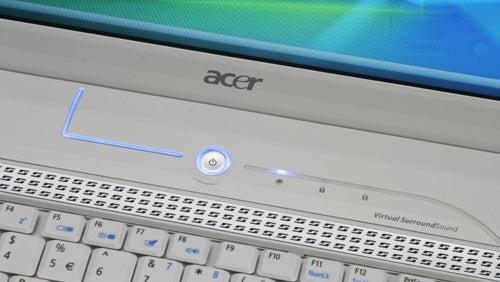 In addition to the T7300 Core 2 Duo there’s 2GB of DDR2 RAM, which seems like the new minimal level for Vista though once again it’s clocked at a distinctly un-Santa Rosa 677MHz. Graphics processing is supplied by an 8600M-GT with 256MB dedicated memory, while a generous 160GB SATA hard drive and dual-layer DVD/RW drive provide the primary storage options.


Also present is an 1GB Turbo Memory module for utilising ReadyDrive and ReadyBoost, while Gigabit Ethernet and Draft N wireless round off the full compliment of Santa Rosa features. There’s also an option for an HD DVD drive, though naturally this is bound to cost a fair few more pennies. 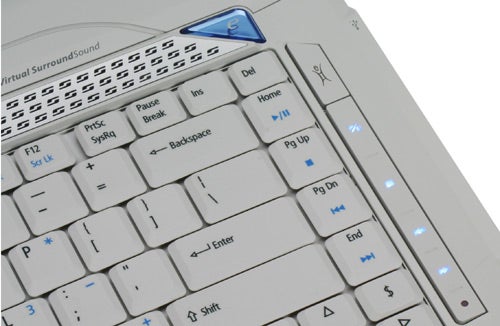 Moreover, with the 5920’s 15.4in display topping out at a disappointing 1,280 x 800 it’s arguable whether an HD DVD drive is even that attractive an option. Though this is good enough to display 720p (1,280 x 720), it’s by no means ideal and though the display is capable it’s hardly going to do HD content justice. Black levels are good, as is general image quality, but it isn’t the most vibrant notebook display and the viewing angles are mediocre at best. Ultimately, at this size I’d like to see a 1,680 x 1,050 display, but even 1,440 x 900 would be preferable to the restrictive 1,280 x 800. 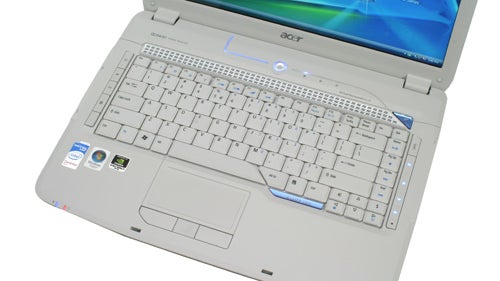 Then again this ignores one of the other key features of this notebook: Dolby Home Theatre. Audio hardware is provided by Realtek, but includes Dolby Home Theatre certification which includes Dolby’s Digital, Digital Live, Pro Logic II, Headphone and Virtual Speaker technologies. This means, that using the S/PDIF output or HDMI, the on-board sound hardware will create a 5.1 signal out of a stereo source, output 5.1 signals and create the illusion of surround sound using stereo speakers. These are great features to have but for me its Dolby Headphone that’s the real draw, adding superb surround effects to games and films when using headphones.

With or without an HD DVD drive, having Dolby Home Theatre certification makes the 5920 a compelling solution as a mobile Media Center and household notebook. Draft N wireless and Gigabit Ethernet provide HD streaming options, and there’s even a seven pin S-Video Out for analogue component TV output along D-Sub for external monitor support.

This is a great selection of video outputs, and in general the 5920 is well catered for in this area. There are four USB ports, one on the right edge and three on the left while on the front you’ll find Line-In, Microphone and a combined S/PDIF, Headphone and Line-Out jack. Also located on the front is a 5-in-1 Card Reader, an infrared receiver for a Media Center remote and a handy analogue volume control wheel. A mini-Firewire can be found on the left along with an Express Card slot, Modem and Ethernet ports and all the aforementioned video and USB connections.


Our sample came with an 8-cell battery which, combined with the sizable 364 x 270.2 x 30.8/43.7 chassis, brings the total weight of the notebook to 3.17kg – just over the advertised 3.0kg. Since there are options for 8-cell or 6-cell batteries on the 5920, I’m willing to bet that the official figure is with a 6-cell battery, and as such if you’re interested in buying it’s worth checking which battery you’re getting.

Either way in physical terms the 5920 is no Olympic athlete, but it’s not so big that it can’t be carried around the house from room to room, which is what it’s clearly intended for. For mobile use you’ll certainly want something a little more svelte, such as the forthcoming Sony TZ.


As it is the 8-cell version, the battery provides impressive performance, no doubt thanks in part to the new power saving initiatives instigated as part of the Santa Rosa platform – more on which can be found in Riyad’s Santa Rosa feature.

For general usage Acer quote a 3.5 hour battery life using the 8-cell battery, and in my experience this figure is accurate. Indeed, if restricted to basic word processing tasks one can get a little more than the quote figure. Crucially, there was no problem with watching a two hour film on battery with screen brightness at full. On a full charge there was even an hour or so battery life still remaining, so there’s plenty of tolerance for longer feature films or a mini Lost marathon.

As mentioned previously we’ve run our usual set of tests for this notebook, PC Mark 05 and our own 2D benchmarks that are designed to test real-world performance. For comparison I’ve chosen the Evesham Zieo N500-HD which, despite its ordinary looks, was an impressive performer. 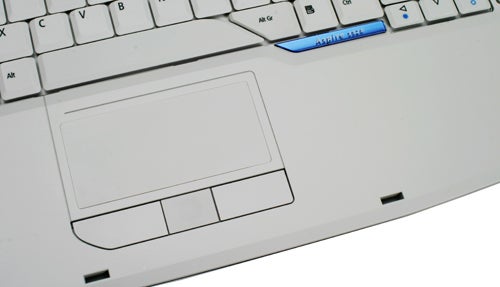 Overall, despite having a slower processor and less dedicated video memory, the 5920 did very well. It matched the Zieo in most departments, performing well in all the 2D tests. The only test which showed a noticeable difference was the Virtual Dub encoding test, where the slower CPU is the major factor.


We haven’t run a full set of 3D benchmarks with the 5920 due to time constraints, but real-world testing – i.e. playing some games – showed that the 256MB 8600M-GT was perfectly capable of playable frame rates at native resolution with some effects turned on. It’s never going to be a gaming powerhouse, but for casual PC gaming it’ll get the job done. 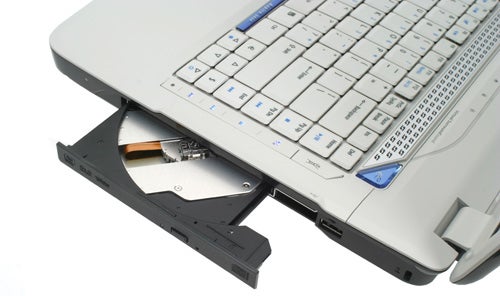 When it reaches retailers in July the 5920 be retailing at a very reasonable £799.99 inc. VAT, with a one year International Travellers Warranty. This isn’t as generous as the 3-year warranty that’s included in the Zieo’s £1,099 inc. VAT price, so you’ll probably need to factor a warranty upgrade into the quoted price as well. But, even with that taken into account, it’s still a great price for a fantastic notebook that has all the Santa Rosa features and plenty more besides.


Acer’s Aspire 5920 hits a great sweet spot between price, design and functionality. It might not be most portable of beasts, but it should serve as a great desktop replacement which can be wheeled around the house for all sorts of functions. The low resolution screen may be a little disappointing, but Acer isn’t alone in this and until higher resolutions become the standard it would be unfair to single it out in this regard. Thus, if you’re in the market for Santa Rosa notebook, it’s well worth waiting for this one to hit retail.


”’Update:”’ For those looking to buy this, it should be available at the beginning of July.