While designer laptops like the metal-clad Dell XPS 15z and premium ultraportables such as the Toshiba Satellite R830 or Samsung Series 9 900X3A capture both our hearts and imagination, what most people actually end up buying is an affordable 15 inch machine. Of course there’s no lack of choice in this segment, so how does Acer’s new Aspire 5750 hope to be your lucky pick? Join us as we find out.

Specs-wise, the Acer 5750 is not your typical affordable laptop: for £450, you get a Core i5, 4GB of RAM, a 320GB hard drive and Intel’s integrated graphics running a 15.6 inch, 1,366 x 768 screen, along with an HD webcam and some decent connectivity (including USB 3.0). That’s an impressive line-up for the money, and despite lacking fancy extras such as a discrete video card or Blu-ray drive, it’s more than adequate for many.

Thankfully, you can’t tell that this is a budget laptop from its design either, though its build quality does give it away a little: Acer has used fairly solid plastics throughout, though there is just a tad more flex than we would ideally like in the lid’s top and on both base and top near the hinge. 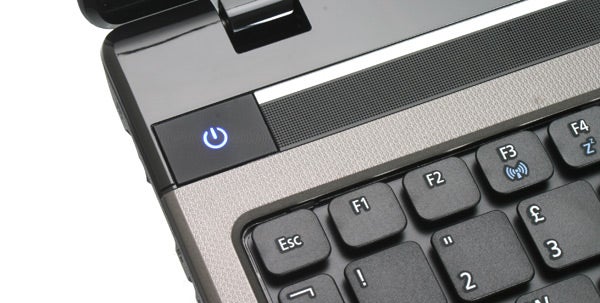 We’re really pleased that Acer has gone for a matt lid again. The company did have a few matt-lidded laptops over the years, but more often than not we received glossy machines like the Acer Aspire 5745DG. That meant fingerprints, dust and other marks were easily visible, and didn’t provide a secure grip. With the Aspire 5750, however, the mocha-coloured lid sports a cross-hatch-like pattern that’s both attractive and practical. Naturally, it’s also more fingerprint, scratch and dustproof than shiny alternatives.

A similar textured mocha finish continues on the inside around the keyboard, though the pattern is altered and more subtle. This doesn’t extend to the screen’s bezel, which is piano black to match the display’s glossy coating.

Connectivity is surprisingly decent for a budget outing (especially considering Core i3 Aspire 5750 models come in at below £350). You’ll find a Gigabit Ethernet port, VGA and HDMI for video, USB 2.0 and headphone plus microphone jacks to the left, an SDHC memory card reader at the front, and both USB 2 and USB 3 ports as well as a tray-loading DVD rewriter on the right.

Our only real complaint here is that the memory card reader doesn’t support the newer, larger SDXC standard, but then anyone who can afford those cards is likely to be able to afford a better laptop. We might have liked eSATA too, but at least USB 3 takes care of hooking up fast external storage. If we’re being particularly niggardly we’d say it would have been nice to have at least two USB 3.0 ports for fast transfers, but at this price point it’s a bonus to have it at all. On the wireless front we do feel the cuts, however: Wi-Fi N is included but Bluetooth hasn’t made it in.

Acer offers a full-size keyboard including number pad on the Aspire 5750. While hardly a stand-out effort and far from on par with offerings from HP, Toshiba or keyboard-king Lenovo (which can make even netbook efforts like that of its ThinkPad X100e feel great), it’s certainly usable.

The majority of the flex is located towards the right side, meaning it won’t interfere too much with normal typing. The large, matt keys are well-spaced and offer a good amount of travel, though they could have done with a more defined click. However, typing for long periods is pleasant enough.

Thankfully, the touchpad is well-positioned so that it doesn’t interfere with typing. It’s also nicely integrated, as it’s one unbroken piece with the wrist-rest. We were surprised by its unusually smooth surface, which is almost slippery and does take a little getting used to, but works well. Our only niggle is the large dead zone in the centre of the rocker switch the pad’s buttons have been integrated into.

Getting to the 15.6in screen, it’s a standard affair: a glossy-finish TN panel with a resolution of 1,366 x 768. It has its strong points, including even backlighting with no obvious bleed and minimal banding. However, poor viewing angles and a lack of contrast spoil the party somewhat, leaving those discerning about their visuals to look elsewhere. Specifically, both horizontally and vertically there’s some significant contrast-shift which limits the amount of people you can view with, and in our greyscale test the Aspire 5750 couldn’t distinguish between the three darkest shades, meaning you may miss out on some detail in gloomy games or movies.

However, while on higher specced (and therefore higher priced) configurations of the 5750 this is undoubtedly a deal-breaker, on our model and its even cheaper Core i3 siblings, some compromises are expected. If you’re just after a productivity machine these won’t be significant issues, and even for more graphically intense activities, many will find the screen to be adequate. 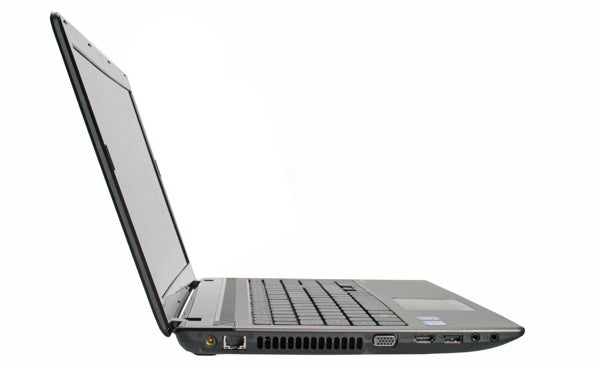 We were pleasantly surprised when it came to the sound this Aspire manages to produce. We weren’t expecting much, but – aided by a little Dolby processing – the speakers hold their own, resulting in audio that has good depth and punch at volumes loud enough to fill a small bedroom without losing significant definition.

As already mentioned, the Aspire 5750 is available in a range of prebuilt configurations, which go from around £360 to our £450 model. As usual with Acer, its model name simply flows off the tongue: it’s the 5750-2414G32Mnkk. See? So easy to remember you can go into a shop and ask for one without even writing it down.

What this 2414G32Mnkk configuration gets you for starters is an Intel ‘Sandy Bridge’ Core i5-2410M. This impressive dual-core chip runs at anywhere between 2.3 to 2.9GHz, and offers Hyper-Threading for up to four virtual cores. It will handle the tasks an average user might throw at it with consummate ease, and frankly, we reckon most who are after a budget machine like this will be just as well served by going for the cheaper Core i3 version.

Unfortunately the impressive performance doesn’t hold for Intel’s integrated graphics, which will do a great job with HD video but leave a lot to be desired in the games department. With detail set to medium and resolution at a sub-native 1,280 x 720 in TrackMania Nations Forever, the Intel HD 3000 managed 47 frames per second – which doesn’t sound too bad until you consider TMNF is a three-year old game that was hugely undemanding even for its time.

Other specs include the standard 4GB of RAM and a slow, 5,200rpm 320GB hard drive, which is the bare minimum you would expect these days. In use this Acer stays relatively cool and doesn’t suffer from loud or whiny fans, though under load it’s still audible.

Last but not least, what’s the 5750-2414G32Mnkk like away from a socket? At 2.6kg it’s not the most portable of machines, but still easy enough to take out and about. It managed just short of five hours in MobileMark’s low-intensity Productivity test with wireless radios disabled and screen brightness at 40 percent, which means you should still get at least four hours under more strenuous conditions. Considering there’s a Core i5 under the hood that’s not too shabby a performance from the removable 4150mAh battery.

So how does the £450 Aspire 5750 hold up in the value stakes? If you’re after a general purpose productivity machine and don’t mind the screen’s weaknesses, very well indeed! As an example, an equivalently priced Inspiron 15R from Dell would leave you with a Core i3 and only 3GB of RAM (though you do get Bluetooth and a 500GB hard drive), while HP doesn’t even offer Sandy Bridge laptops in this price class (in the UK). 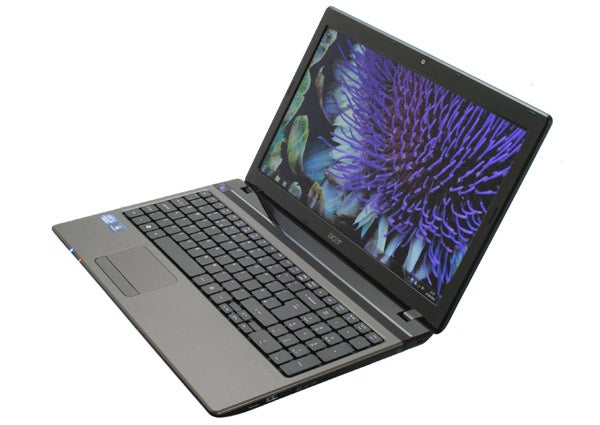 Another apt example is the MSI CR640, which is now available for the same £450 price and sports a similar spec, but also moves down to Core i3. Indeed, if you’re really after a bargain, trade in the Core i5 CPU on our 2414G32Mnkk review sample for Acer’s Core i3 2314G32Mnkk, and it will only set you back around £360!

Its screen’s poor viewing angles and contrast hold it back from an outright recommendation, but if these issues don’t bother you and you’re just looking for a solid laptop that does the job, Acer has produced a decent machine at a superb price. Sandy Bridge Core i5 power, good usability, surprisingly punchy speakers and highlights like USB 3.0 and an HD webcam means there’s plenty to like.