With so much choice in the 15.6in laptop sector, it can be quite difficult to stand out. Acer is enthusiastic about trying to provide a choice to suit everyone’s taste, and the latest fruit of this effort is the Acer Aspire 5745G, an Intel Core i5-based mobile machine with switchable graphics for a relatively affordable £630. 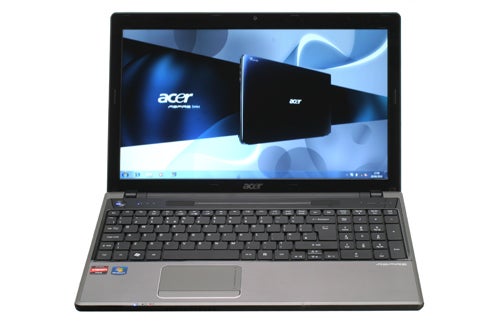 Specifically, the 5745G uses a 2.4GHz Intel Core i5-450M, which should cope very easily with the average consumer’s demands. Strange, then, that Acer has opted for just 3GB of RAM, and a 320GB hard drive for permanent storage. Neither is particularly generous at this price, especially considering the Toshiba Satellite L650-10G costs the same but ups things to 4GB RAM and a 500GB hard drive.


One thing this Acer does have to its advantage, however, is the presence of switchable graphics. This means you can benefit from the low-power draw of Intel’s integrated chip when out and about, or the more impressive 512MB Nvidia GeForce 310M dedicated chip for some gaming and CUDA-accelerated applications if near a socket. 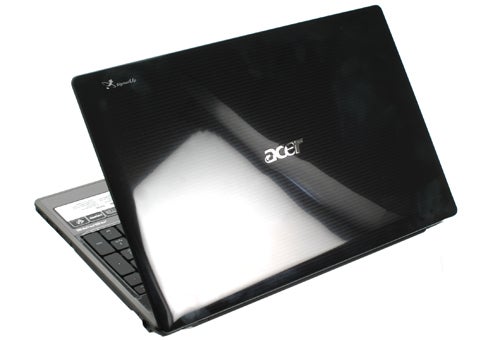 Regrettably the 5745G doesn’t use Nvidia’s Optimus technology, so switching isn’t seamless, but it activates automatically depending on whether the laptop is plugged into a power socket or can be activated manually with a small button marked ‘P’ above the keyboard. Not exactly intuitive marking, we know, but as it’s the only other non-keyboard button aside from optical drive eject, it’s hardly difficult to find.


Aside from this the specs are what you would expect, with a DVD-Rewriter, Wireless N Wi-Fi but no Bluetooth, and a fairly standard 1,366 x 768 resolution for the 5745G’s glossy 15.6in screen. Its design is also nothing extraordinary – anyone familiar with Acer’s Aspire or Timeline ranges will feel right at home. Unfortunately, unlike the textured lid found on the Aspire 5553G, here you get the usual glossy finish we love to hate. Thankfully the palm-rests are finished in a non-marking smooth plastic which gives the appearance of brushed metal, but we’d sooner have seen such a finish throughout. 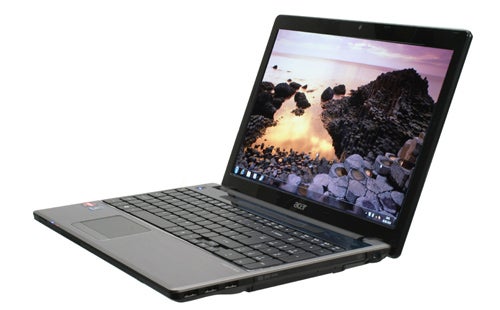 Build quality is generally solid, though there’s one notable exception: the lid is too flexible and pushing in the middle of it near the battery when the laptop is open (as you might do while moving it about) results in the bezel separating from the screen. While this might never present a problem, it’s not the kind of quality we like to see on any laptop – especially not one costing more than £500.

Like the majority of its specifications and design, the Aspire 5745G’s connectivity is nothing if not familiar. Four USB 2.0 ports and a memory card reader join a Gigabit Ethernet port, VGA and HDMI video outputs and twin 3.5mm audio jacks for headphone and microphone, with the latter doubling as a digital output. 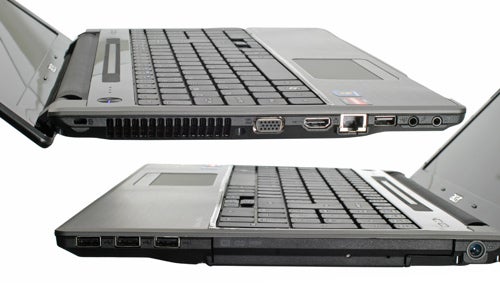 Likewise the tile-style, matt black keyboard with full number pad is identical to that found on so many Acer laptops, meaning it’s pretty good. We like the feel of the lightly textured keys and the layout is logical with well-placed shortcuts. Feedback is positive despite being slightly shallow, and there’s minimal flex to contend with. Overall it’s a pleasure to use.


Much the same can be said for the touchpad. Its smooth surface feels great and it’s nice and sensitive in general use, though unlike most rivals or even Acer’s preceding efforts we found multi-touch to be somewhat unresponsive. The two buttons incorporated into a single rocker-switch below the touchpad work well enough, but their active zones are a bit small and the left button is a tad too stiff for ideal comfort. Despite this it’s all very usable.

When it comes to audio, Acer’s 5745G performs competently. While not even coming close to the likes of harman/kardon’s on Toshibas like the Satellite A660-14G, its stereo speakers produce a fairly clear soundstage for integrated efforts. Though bass lacks punch and distortion creeps in at maximum volumes, headphones or separates are not a necessity. At this stage it’s worth mentioning an Acer software glitch we haven’t encountered before, where adjusting the volume occasionally left the volume icon permanently on-screen. 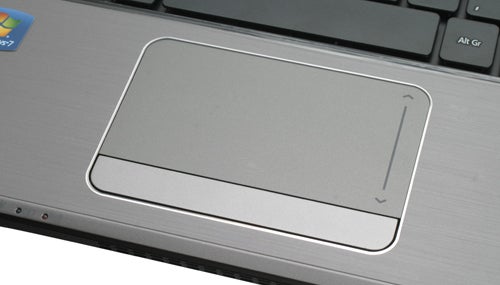 Speaking of the screen, once you get past its reflectivity it’s decent enough. A resolution of 1,366 x 768 doesn’t give you too much room to play with, but is standard for most 15.6in laptops and it retains excellent sharpness. Viewing angles are mediocre at best, but the screen resolves more dark detail in videos and photos than some similarly priced laptops. While this is achieved at the cost of white differentiation, it’s a sensible compromise considering entertainment such as films and games tend to contain far more dark than light details. There’s also no sign of backlight bleed or significant banding, so on balance the screen gets a thumbs-up.

As already mentioned, the Core i5 450M is a dual-core affair and it offers virtual four-core support due to Intel’s Hyper-Threading. By default its cores run at 2.4GHz, but depending on the load across them this can be ‘Turbo Boosted’ up to 2.93GHz. As a consequence this is one seriously fast CPU that can adapt to both multi-threaded and single-threaded applications, making it a great all-round performer.

It compares especially favourably against AMD’s mobile CPU range, though the AMD tri-core Phenom II X3 CPU found in the Aspire 5551 only runs at 2.1GHz and its third core isn’t generally utilized to its fullest.


Despite its dedicated Nvidia GeForce 310M graphics, the Aspire 5745G is not really a gaming machine, as proved by its lamentable 16.45 frames per second (fps) score in Stalker: Call of Pripyat. This dedicated chip isn’t entirely without merit, however, as illustrated by the 310M’s perfectly smooth 54.8fps in the less demanding TrackMania Nations Forever. This ensures you can play many less demanding games, particularly many MMO’s and older titles without much trouble. Moreover, while something of a niche benefit at the moment, Nvidia’s graphics cards can take of advantage of CUDA-accelerated applications.

Thanks to its ability to switch to the Intel integrated graphics, the 5745G manages decent battery life in spite of the modest 4,400mAh/48 Watt-hour battery. In productivity it managed 223 minutes (3hrs and 43 minutes), and, as the screen is still usable at brightness levels below the tested 40 per cent, you should be able to get even more out of it.

You won’t have any problems watching a lengthy film either, as the 5745G managed a comfortable two hours and 34 minutes in our intensive DVD test. Lower the screen brightness from 100 per cent and you could even get through an extended session of Lord of the Rings.


Unfortunately such battery life doesn’t make up for the fact that we’d sooner have more RAM and a larger hard drive, something you can get from a slightly more expensive version of the 5745G. For just £50 more it offers an almost identical specification, but adds 4GB of RAM and a 500GB hard drive. Moreover, the Toshiba Satellite L650-10G offers both for the same price as this Acer and performed similarly in our benchmarks, though battery life is somewhat poorer due to the lack of graphics switching.


Good performance and battery life are the highlights of this otherwise unremarkable laptop. However, for the money a larger hard drive and more RAM would have been nice, while the design and build quality are average. Overall it does the job, but there are better options available.