It’s a sign of the times that we increasingly take connectivity for granted. A few years ago, we wouldn’t have expected for our PDAs or laptop to be able to get online unless it was plugged in – now we balk at a product that doesn’t have wireless data capabilities. I can clearly remember reviewing one of the earliest notebooks with integrated Wi-Fi and now the age of integrated mobile phone SIM cards has arrived. Back in April, Riyad reviewed the first notebook we’d seen with an integrated HSDPA data card, from Fujitsu Siemens but supporting networks weren’t up and running at the time. Now they are, and with a Vodafone data SIM inside this Acer Aspire 5650 notebook we were keen to see what it was like to use. 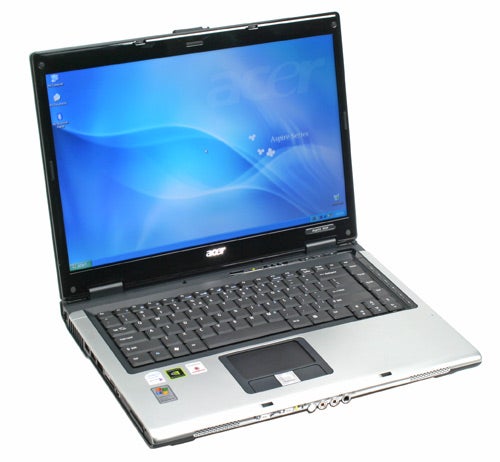 HSDPA is essentially an improved variant of 3G, dubbed by Vodafone as ‘3G broadband’. It offers connection speeds of up to 1.8Mbit/sec compared to only 384Kbit/sec from standard 3G. The advantage of having integrated data card in a notebook is that it brings true mobile connectivity as you can connect to the Internet anywhere you can get a reasonable mobile phone signal. You no longer have to go find a Wi-Fi hotspot in a cafe; you can just go to the park and open up. It’s a truly liberating experience. Riyad will be reviewing the Vodafone HSDPA data card soon so I won’t steal his thunder but suffice to say that it does make a huge difference.

Initially when testing I was only able to connect at standard 3G speeds. Being able to download and browse the Internet while out of range of the office Wi-Fi was impressive, but when I did get HSDPA working it felt truly liberating and it was great to not have a large card sticking out of the side of the notebook. Of course, it’s coverage dependant but although the press releases claimed that it would only work inside the M25 as well as other some other major cities, it worked fine by the TR offices out in Ascot. 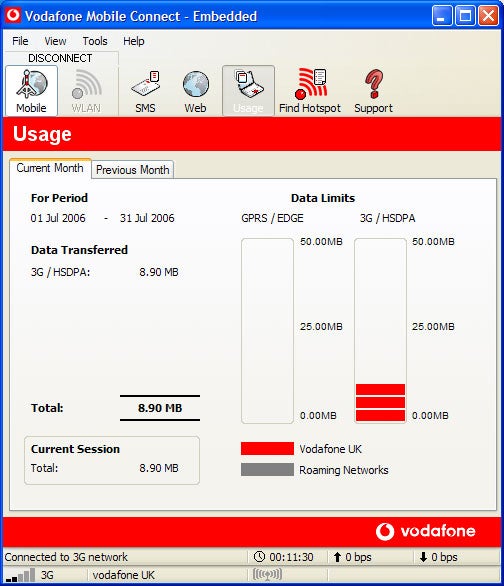 The SIM card is inserted in a slot in the battery compartment and you then have to enable the connection by flicking a slider switch on the front of the notebook. The Vodafone mobile connect software is pretty good and gives usage details so you can keep track of how much your downloading. You’ll need to keep an eye on this as with this kind of speed it could be easy for you to go over your allowance. The speed is better than many people’s fixed line broadband connections and I soon found myself downloading updates and programs for the fun of it.


The notebook’s build quality is pretty good but it’s on the heavy side at 2.92Kg. This isn’t really suited then for portability. Unfortunately, as ever, Acer did its usual trick of supplying press samples that don’t correspond exactly to what will be available to buy. Our review unit sported 2GB of RAM and a 120GB hard disk, whereas for the price quoted it will only ship with 1GB and a 100GB hard disk so bear that in mind when looking at our benchmark scores.

At the rear of the notebook you’ll find both DVI and D-Sub and S-Video outputs, another two USB ports and a 56k modem connector along with the AC power port. The placement of the USB ports on both the left and the rear is good though ideally I would have like to have seen on the right too.


The display on the Aspire 5650 is a 15.4in widescreen, which is nice and large but I would have liked to have seen a higher resolution that the 1,280 x 800 supplied, which is merely passable. The screen has a high contrast coating and colours do look rich and vibrant on the screen but vertical viewing angles are virtually non-existent. It’s better to the sides but not by much. It’s contained in a shiny bezel, which is quite attractive. 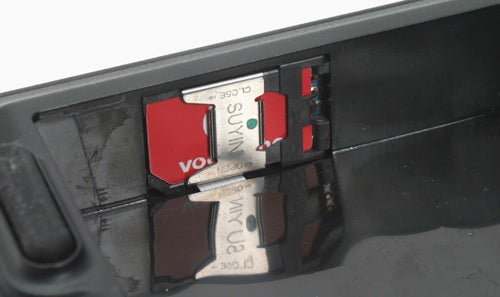 The keyboard is decently sized and it felt quite firm under the fingers. It was fine to use most of the time but occasionally my fingers would catch on the edge of the keys. The trackpad is functional and between the two buttons is Acer’s rocker switch for scrolling up and down and side to side in web pages. There are some nice touches as the icon message pops up when you hit the Caps Lock key, which is useful if you do it accidentally. The space isn’t full size but it’s big enough but the Enter key is smaller than a desktop keyboard but still large enough. There’s a dedicated Euro key next to the shift. Volume and brightness are on the arrow keys and available via the Function shift key.

Above the keyboard are four shortcut keys. These can be assigned to what you want but default to email, web browser and Acer’s ‘ePowering’ software utility. This provides access to a range of functions such as display profiles, power management and security. I found the ePower option really quite useful. I found my wrists were getting quite warm while typing with the hard disk on the left and the battery on the right. I created a profile that throttled the CPU right down as all I was doing was typing and web browsing and the notebook actually did cool down.


Down the right of the keyboard are buttons for controlling a media player, which is pretty convenient, though the keys themselves are quite small. The integrated speakers are quite tinny, which means I wouldn’t want to sit and watch a DVD movie on this without listening on headphones.

If you want to use it as a DVD player then at the front you’ll find an S/PDIF out, though if you’re outputting to an amp you’d probably prefer it at the back. However, the SP/DIF doubles up as headphone socket so that’s why it’s at the front. There’s also a line-in and a microphone socket. Next to these are sliding switches to activate that Wi-Fi and Bluetooth as well as the embedded 3G as I mentioned earlier.

Internally, storage on our review unit was provided by a 120GB unit Seagate hard disk, but the shipping notebook will only have a 100GB drive. This is still a decent size however for a notebook. As well as HSDPA there’s also 802.11g internal Wi-Fi.


The CPU is Intel Core Duo T2300 running at 1.66GHz sitting in an Intel i945M chipset. Graphics are provided by a dedicated GeForce 7600, with a core memory clock of 400MHz and 350MHz (700MHz effective) of RAM. This makes it very similar to the Zepto Znote 6214W that Spode reviewed back in June so I’ve compared the benchmark scores to that. There’s is a difference though – the memory on the GeForce 7600 on the Acer only has 128MB of dedicated memory compared to 512MB on the Zepto. We’ll see how much difference that makes. 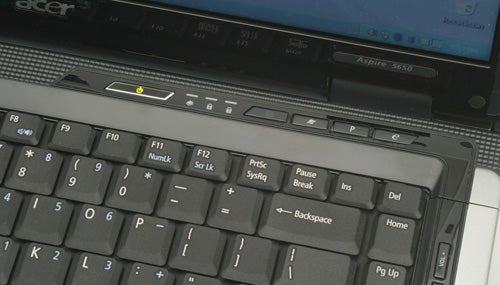 As far as 2D is concerned we’re limited to PC Mark 05 as I was unable to get either SYSmark 02 or 04 to complete on the Acer. The PC Mark05 score is pretty decent but overall it falls behind the Zepto. This is despite having virtually the same CPU score and a faster one on the memory and hard disk tests. The culprit clearly seems to be the relative lack of memory of the graphics chip.


Indeed in 3DMark 06 it falls significantly behind, even more so than we expected. At native resolution there is a significant difference with no anti-aliasing or filtering, but once these are enabled the difference is even wider. Keep the settings reasonable and you can still get a decent frame rate in Battlefield 2, but Counter-Strike: Source is barely above 30fps, which is very disappointing. Quake 4 scores are passable but the Call of Duty 2 frame rate is a washout.

The good news is in MobileMark 2005, with the Acer significantly outlasting the Zepto. The DVD playback score of 174 minutes means you’ll easily get a two and half hour movie in, which you won’t on the Zepto. It’s still not in the same league as ultra-portables though, so despite the embedded 3G you won’t be able to keep away from a wall connection for too long.


Despite the GeForce 7600 then, the Aspire 5650 is not a great gaming machine, so if you want to enjoy the benefits of embedded 3G Broadband you’ll have to compromise in that regard. Battery life is reasonable though and the notebook is adequately speedy and well specified. For Internet access on the move however, the embedded HSDPA makes this the best mobile notebook I’ve ever used.


Thanks to an embedded HSDPA SIM the Acer is the best notebook we’ve tested for mobile connectivity. The spec of the rest of the notebook is good but on the downside its fairly large and heavy, sports a disappointing screen resolution and graphics performance is under par. 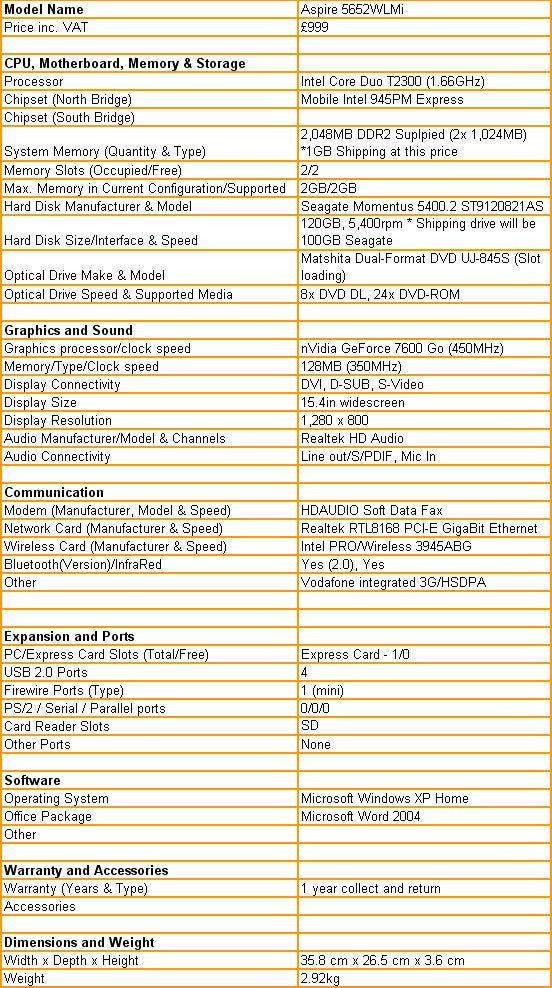