Acer needs to do something about its Aspire laptop naming scheme; it’s not exactly intuitive to go into a shop and ask for a 5536-744G50Mn! Nevertheless, based on previous efforts such as the award-winning Aspire 7735Z-424G32Mn we’re hoping for good things from this well-specified, AMD-based 15.6in machine.


At first glance its chassis is very similar to that of its larger 17.3in cousins. It sports the same glossy dark-blue finish on its lid, which in no time at all will be adorned with unsightly fingerprints, while the basic layout is very similar. One small difference is that the lid is held closed by a slightly awkward-to-push springed clasp, but aside from this it’s just a smaller version of the same design. 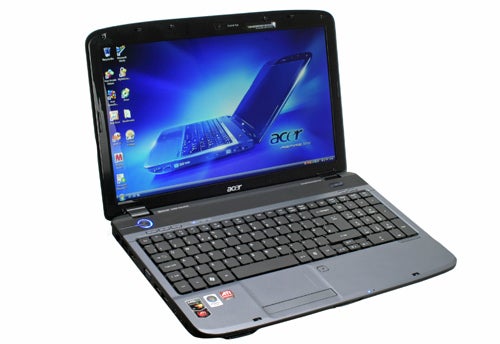 Thankfully, despite a shiny black bezel the rest of the machine is matt, rendered in a fairly attractive combination of gunmetal grey and black. Build quality is pretty good and there’s no sign of the keyboard flex found on the AMD-based 7535G-824G50Mn.


A large, blue-backlit power button is still an attractive touch, with the largest change being that the wireless switches and backup button have moved from beside the keyboard to just above it. Though – as with the previous two Aspires we reviewed that share this design – there’s no Bluetooth on-board, it’s always nice to have a physical Wi-Fi switch. 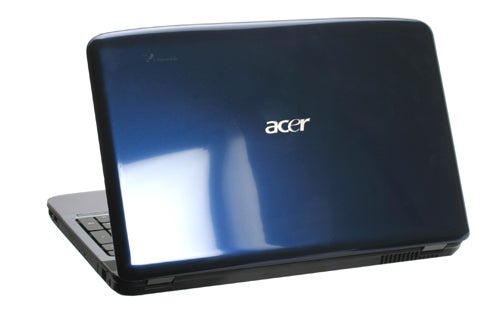 In addition to the same Launch Manager button as found on the 7535G, there’s also the welcome addition of dedicated physical volume controls (though no mute button) and you still retain the option of using secondary functions on the cursor keys.


Moving down to the keyboard, it’s pretty good. Layout is spot-on, with everything in its proper place, intelligent shortcuts and a full number pad. Feedback is crisp, though just a tad too shallow for ideal comfort. Nevertheless, typing on the 5536 is a pleasure. 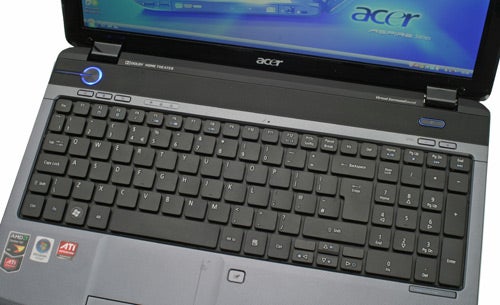 Acer has gone for a smooth (but not slippery) surface for the large and responsive touchpad, rather than the textured finish of its surroundings. Its positioning should prevent accidental palm-swipes, but if it does become an issue for you, like all recent Acer laptops the 5536 offers a backlit touchpad-deactivation button.


Multi-touch is another feature that’s now almost standard on Acer’s mobile machines. It works just fine here, allowing you to – for example – pinch-zoom in and out of photos and web pages, though it’s still not a patch on Apple’s implementation. Our only niggle is with the touchpad’s buttons. Incorporated into a single rocker switch, the left side is easy to press and offers positive action, but the right button requires a bit of a stretch.

While nothing out of the ordinary, the Aspire 5536’s connectivity is certainly adequate. Along the left hand side we have the power jack, a Gigabit Ethernet port, HDMI and VGA video outputs, two USB ports and three 3.5mm audio jacks, allowing for both digital and analogue surround sound.

There’s a memory card reader at the front that will take MMC, SD/HC, xD and MS/Pro/Duo, while on the right reside a further two USB ports and the tray-loading DVD-Rewriter, as well as a modem port for those unfortunates who still can’t get broadband.


Aurally this Aspire is quite good, with one caveat. While it impresses with volume levels that match its bigger cousins, its smaller chassis lets it down by producing noticeable distortion at anything higher than half the maximum volume. However, even at 50 per cent its speakers are still louder than those of many similarly-sized laptops, and they manage to produce a relatively deep soundstage. Meanwhile, thanks to Dolby Home Theater processing, the 5536 will make the most of external speakers or headphones. 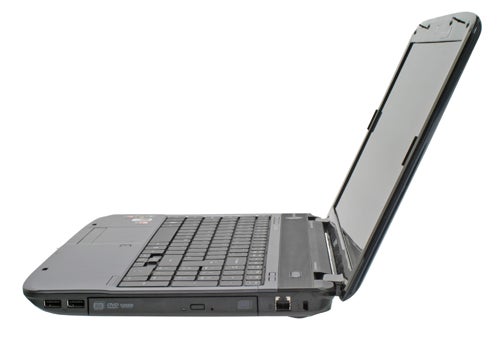 Unfortunately the 15.6in screen, with its 1,366 x 768 resolution, isn’t as satisfying. Vertical viewing angles are particularly poor, meaning you have to tilt it at just the right angle to get the best out of it. Greyscale performance is also slightly below-par, so you’ll lose detail in particularly bright or dark scenes depending on angle. Banding across gradients is noticeable, though there’s no sign of backlight bleed, colours are deep without being oversaturated and even small text is sharp.

Getting onto internals, we have a dual-core AMD Turion X2 RM-74 running at 2.2GHz leading the show. It’s important to note that this is the non-Ultra version of the Turion range and is consistently outperformed by Acer’s own Aspire 7535G-824G50Mn, which uses the AMD Turion X2 Ultra ZM-82 running at the same 2.2GHz. Already not the strongest-performing mobile parts, this Turion even falls behind the Toshiba Satellite L300-29T‘s 1.8GHz Intel Celeron processor. Even so, it should still perform well enough for the average consumer’s needs, though you will experience slower boot times and will quickly notice its limitations in very CPU intensive tasks.

As if to make up for the slightly underperforming CPU, the rest of this laptop’s specifications are fairly generous. There’s a full complement of 4GB of DDR3 RAM on board, though the 32-bit version of Windows Vista Premium won’t take full advantage. Hard drive capacity is also plentiful, with a 500GB drive spinning at 5,400rpm. And though the absence of Bluetooth is regrettable, at least Wi-Fi is up to Draft-N speeds. 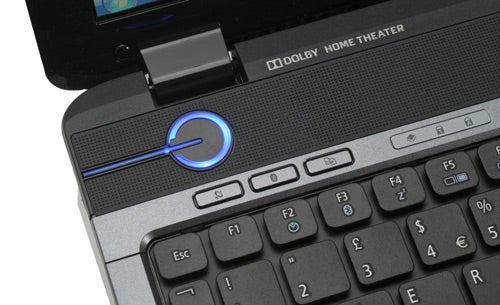 Usually graphics is the single major strong point of AMD configurations, but with the integrated Radeon HD 3200 on offer here that’s not the case. While it’s better than Intel’s equivalent, you still can’t really play games: our standard TrackMania Nations Forever test on Medium Detail stuttered along at 19 frames per second (fps), while Call of Duty 4 managed a mere 11fps at the screen’s native 1,366 x 768 resolution.


On the upside battery life – traditionally a weakness of AMD-based mobile machines – is better than usual. We got just six minutes short of three hours in the semi-intensive Productivity test from the 4,400mAh (49Watt Hour) battery and two hours in the DVD test should be enough for most films. 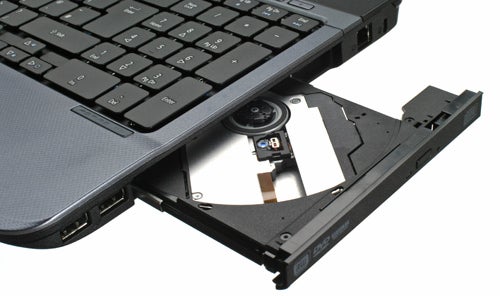 Ultimately though, this laptop is still outperformed both in battery life and CPU grunt by most Intel platforms and its small edge in graphics over an Intel Integrated solution is simply not worth the downsides.


Despite these weaknesses, however, the 5536 still offers reasonable value for money thanks to its generous feature set. Samsung’s R522 offers a faster processor, better connectivity and far superior battery life for only £5 more, while if it’s graphics you’re after (with battery performance not an issue), the HP Pavilion dv6 1210sa is a good alternative at only £480. However, neither of these offer Draft-N Wi-Fi, nor can they match the Aspire 5536-744G50Mn’s hard drive capacity, not to mention niceties such as Dolby sound processing and a multi-touch touchpad. 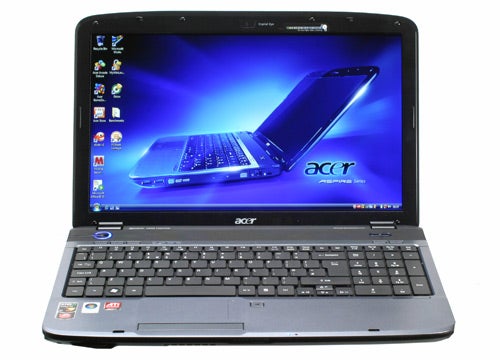 
A jack of all trades but master of none, Acer’s Aspire 5536-744G50Mn is worth considering if you’re after a budget laptop, but depending on your needs the competition may offer better alternatives.

While not exactly a great performer, the Aspire 5536-744G50Mn’s Turion X2 CPU still performs adequately for most people’s needs.

The integrated AMD graphics give longer battery life than we’re used to from AMD laptops.

Over three hours is a pretty good result.

Since this test is performed at 100 per cent screen brightness, lowering it will give even better results. However, the Intel laptop still wins in all scenarios.