What is the Acer Aspire 5?

The Aspire lineup is Acer’s everyday, middle-of-the-road range of laptops. Available in 15.6-inch or 17-inch variants, these models aren’t as thin and light as the company’s Swift laptops. Nevertheless, they offer good all-round performance, at prices ranging from £470 to £850.

The A515-51 model here is one of the 15.6-inch variants; and, as happens all too often with PCs and laptops sent in for review, the exact configuration here doesn’t appear to be available to buy. However, based on the prices of other models available, the specification here would likely set you back around £650.

As a 15.6-inch laptop, this Aspire 5 has a sizeable footprint of 382 x 263mm. It weighs in a 2.2kg, so neither is it a featherweight. However, these numbers are typical for a laptop of this type and it’s reasonably slim at 21mm thick.

What’s more, it’s an attractive machine, despite its lack of any truly premium features. The outside is all plastic, but it has a nice ridged pattern and just the right number of silver-painted highlights. It looks smart but not staid. 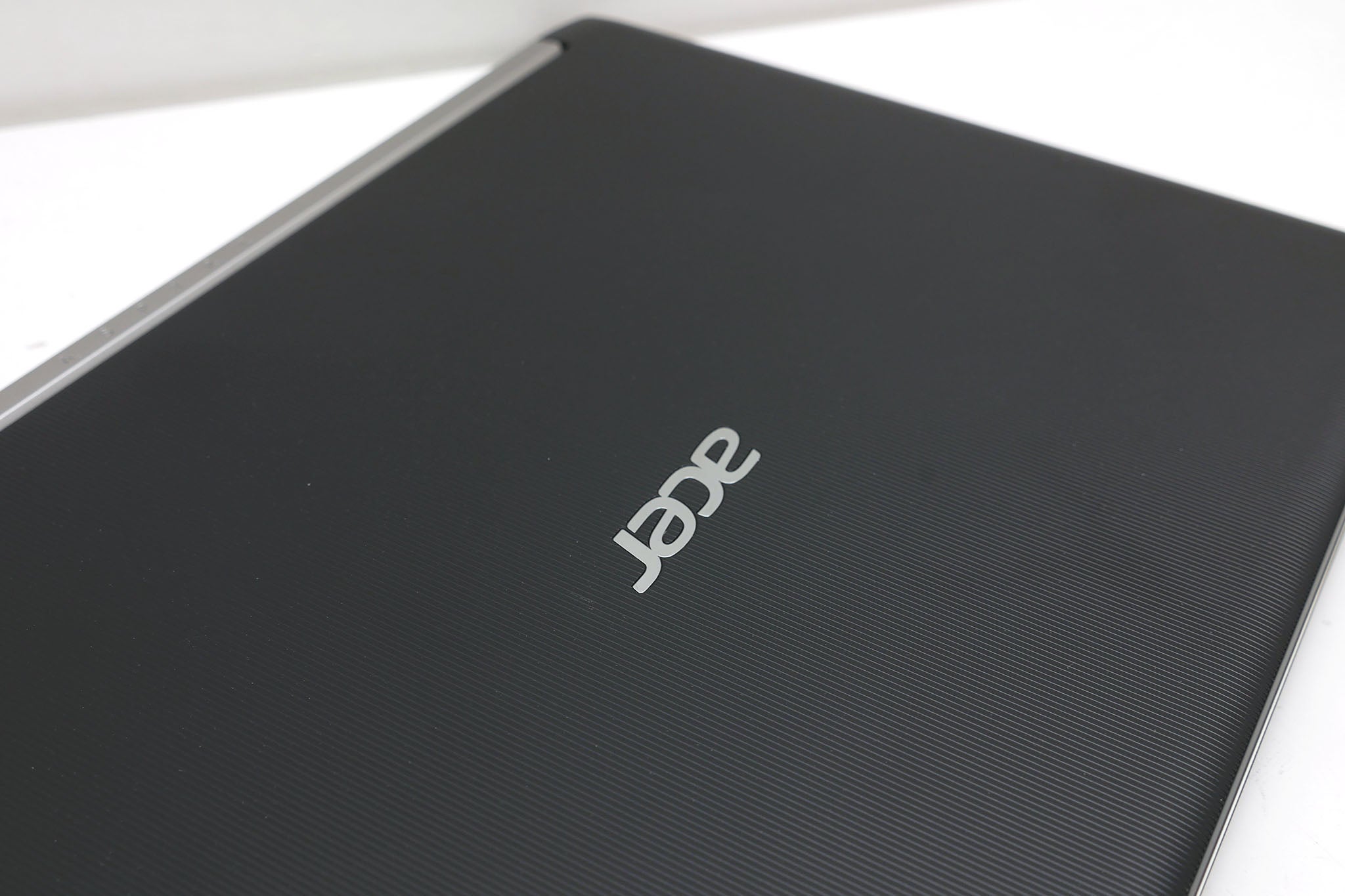 Inside, there’s even a bit of aluminium to add a sense luxury. The keyboard surround is one piece of brushed and black anodised metal, and it looks very nice too.

However, the step up to more premium machines is clear. The likes of the Dell XPS 15 have a much narrower bezel around the screen, making for a smaller footprint overall; and they just generally feel better built. But this is the reason such machines cost twice as much.

Comparing the Aspire 5 to other similarly priced machines, there aren’t actually all that many direct competitors, but the Dell Inspiron 5000 does fit the bill. It doesn’t look quite as smart and is lacking the metal interior, but it finds room for an optical disc drive. 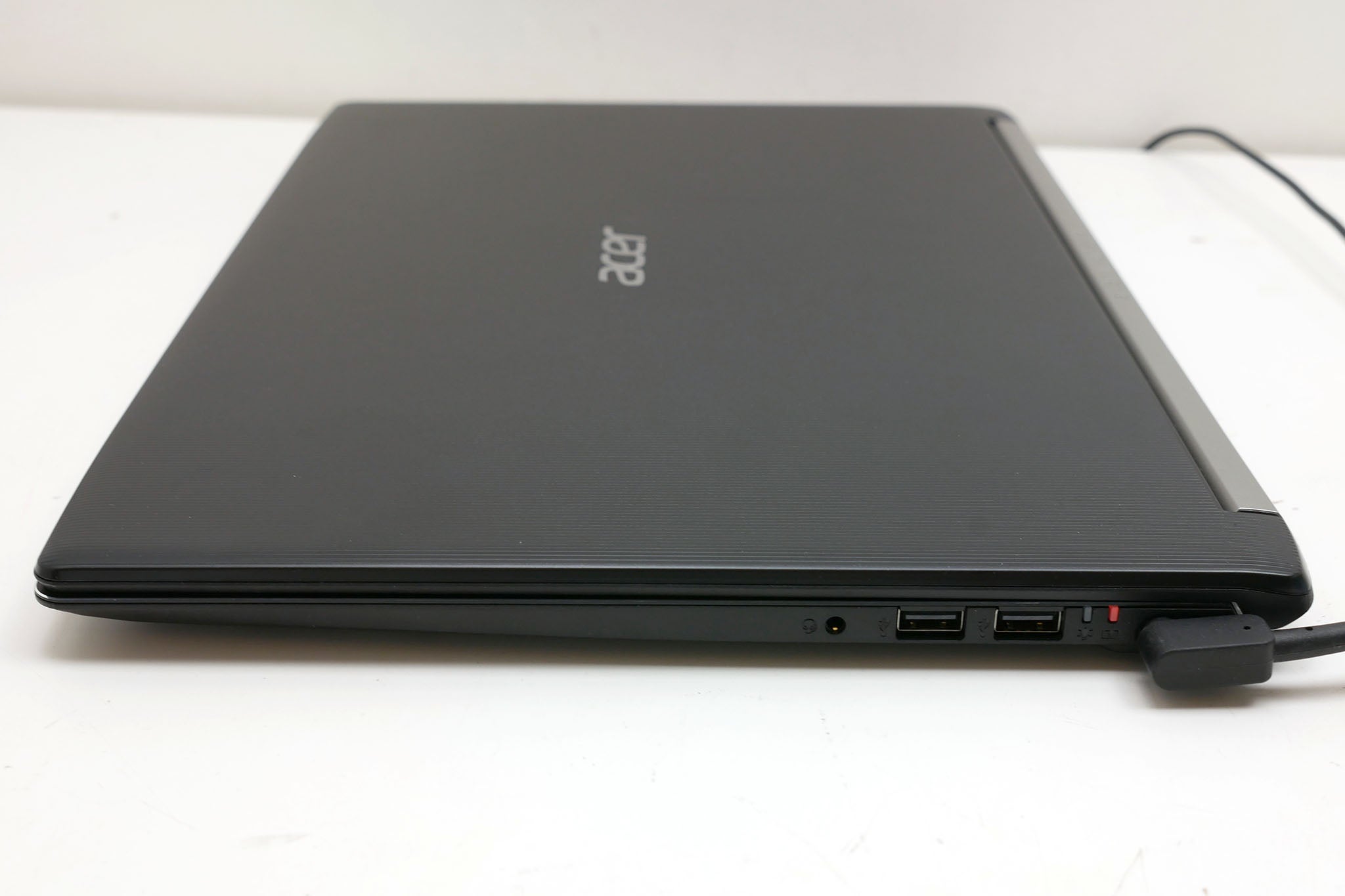 As for connectivity, that sizeable chassis means there’s plenty of room for ports. Along the right edge are two USB 3.0 and a headphone jack, along with the power input. On the left is an SD card reader, a third USB 3.0 port, an HDMI, a USB Type-C, an Ethernet socket and a Kensington lock slot.

Inside, in this configuration, you get a 256GB SSD for storage plus the latest Intel Core i5-8250U CPU and 8GB of DDR4 RAM. Other configurations include a 128GB SSD and a 1TB hard drive, while there are a multitude of CPUs to choose from, plus the option of an Nvidia graphics card.

One of the advantages of buying a larger laptop such as this is that it provides plenty of room for a spacious keyboard, and here there’s even space for a numberpad – something the Dell XPS 15 doesn’t include.

However, while packed with keys, the keyboard isn’t without a few slip-ups. The bunched-up cursor keys may allow Acer to make a cleaner-looking laptop, but they’re not as practical as full-sized keys.

Also, somewhat surprisingly for a modern laptop, the keyboard isn’t backlit. This severely limits the appeal of this device for those who regularly find themselves working late into the night or in otherwise darkened spaces – it’s a nightmare for us journalists, for instance. This also doesn’t appear to be an optional extra on more expensive models. 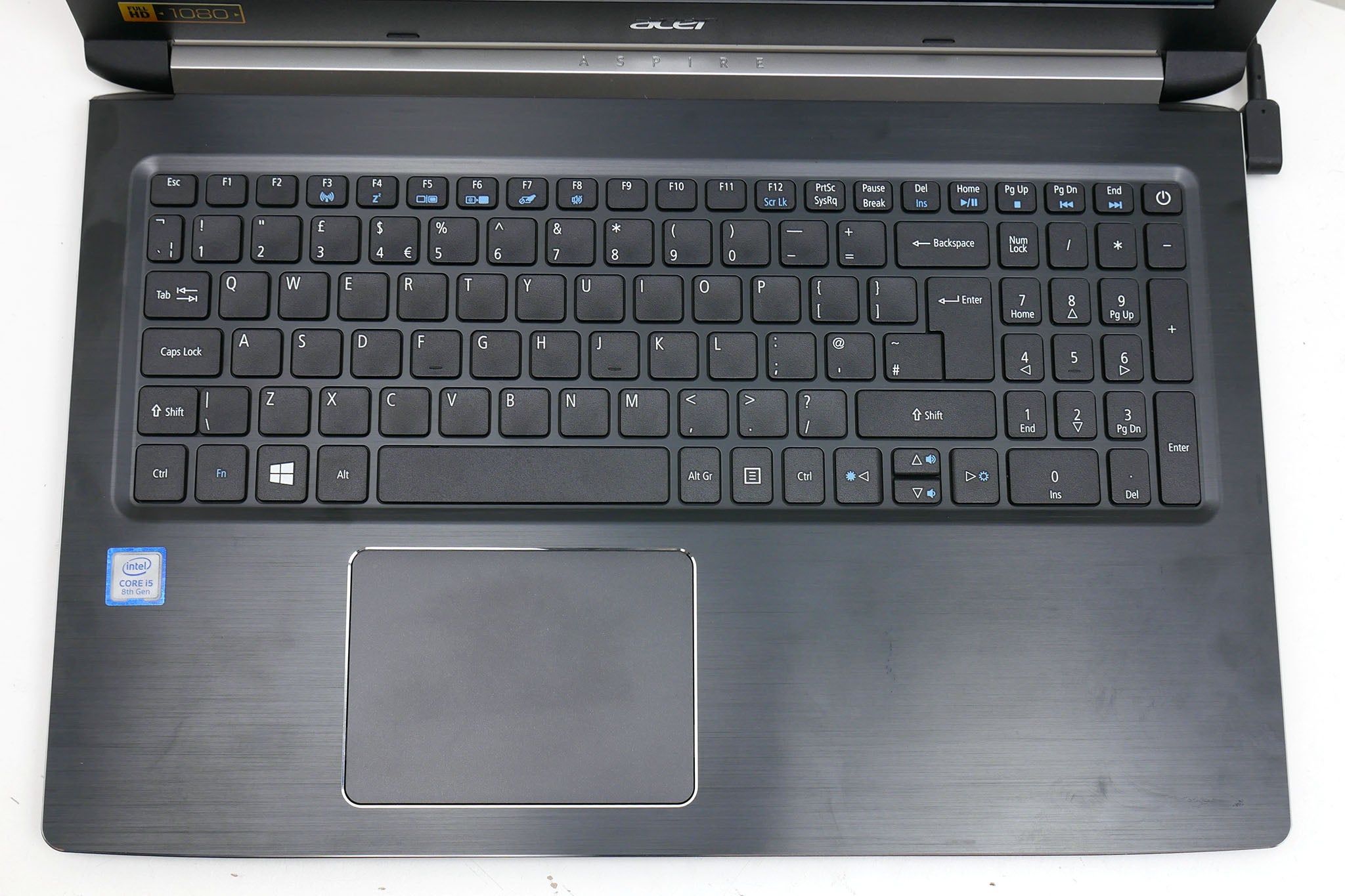 Otherwise, the overall typing experience is fine. The keys respond precisely and there isn’t too much flex or wobble. The layout is also a proper UK one, rather than a rehashed US-style one.

As for the trackpad, Acer hasn’t opted to place it in the middle of the laptop, as we’ve seen on some laptops. It may look better, but it’s a pig to use. Instead, it’s positioned below the main keys, where it’s convenient to reach and doesn’t interfere with your typing.

It’s a large, responsive touchpad too, which makes it a breeze to move the cursor around as well as perform multi-touch gestures. Like most modern-day touchpads, it’s of the single-button variety, where the whole pad presses in and you just press with two fingers to ‘right-click’.

The biggest compromise with this laptop, and its biggest surprise, is the screen. Its 15.6-inch size, 16:9 aspect ratio and 1920 x 1080 resolution are all fine and dandy, but it’s the choice of LCD panel type that’s a letdown.

It uses a basic TN type panel rather than IPS, which means it suffers particularly poor viewing angles. Move the screen back or forward just a smidgeon and the image changes dramatically from looking too dark to too light. 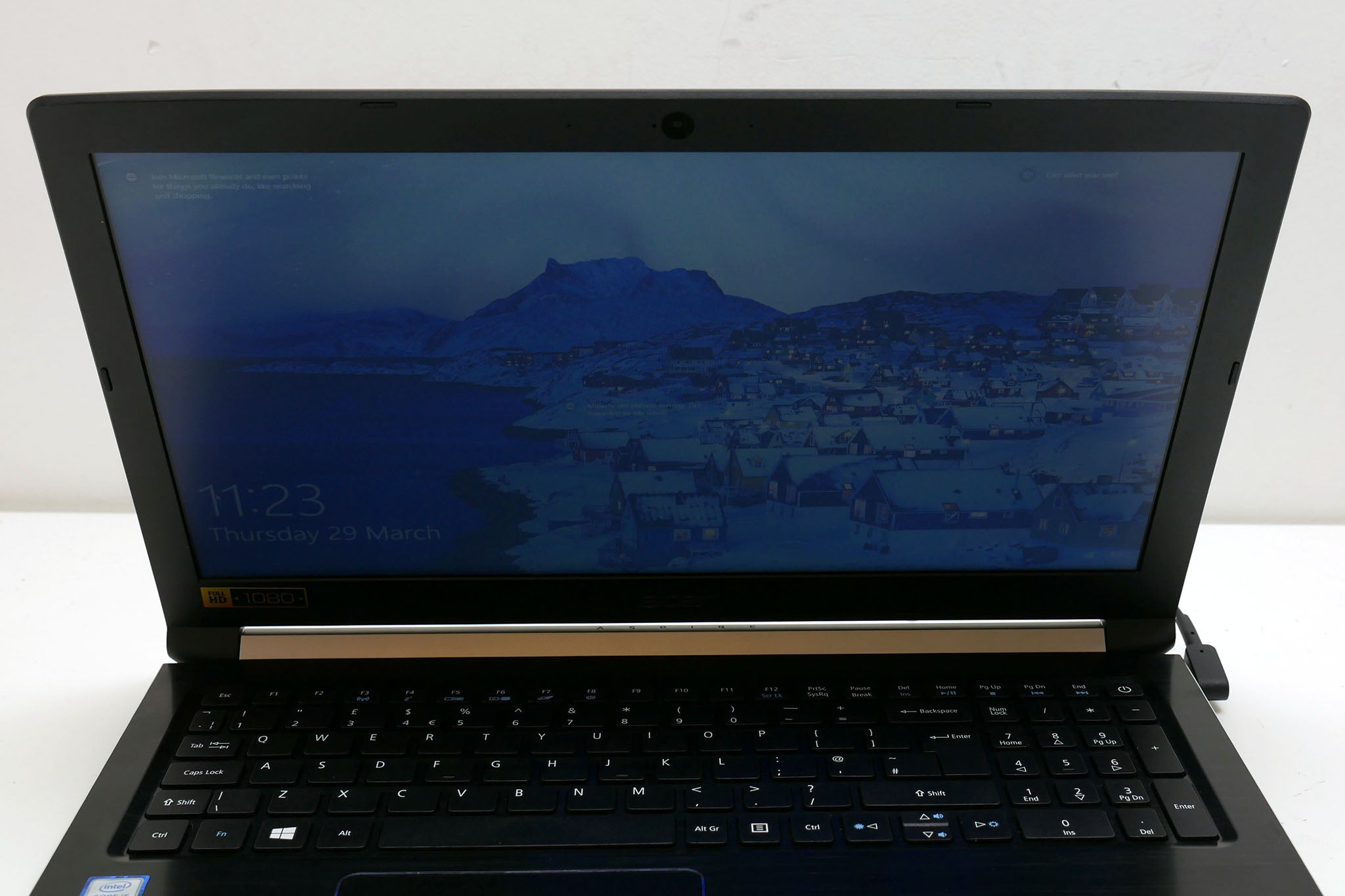 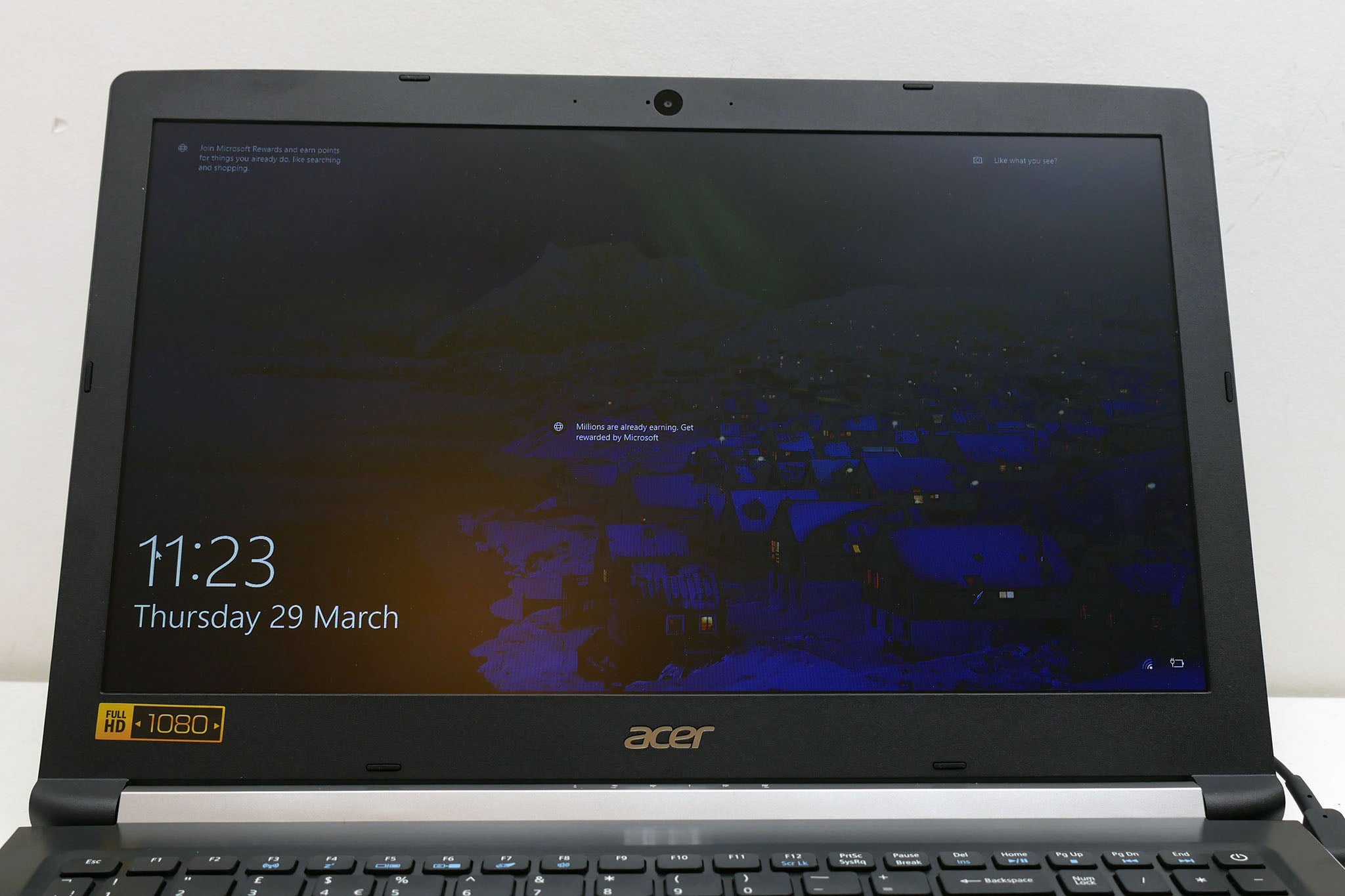 But too dark tilted back 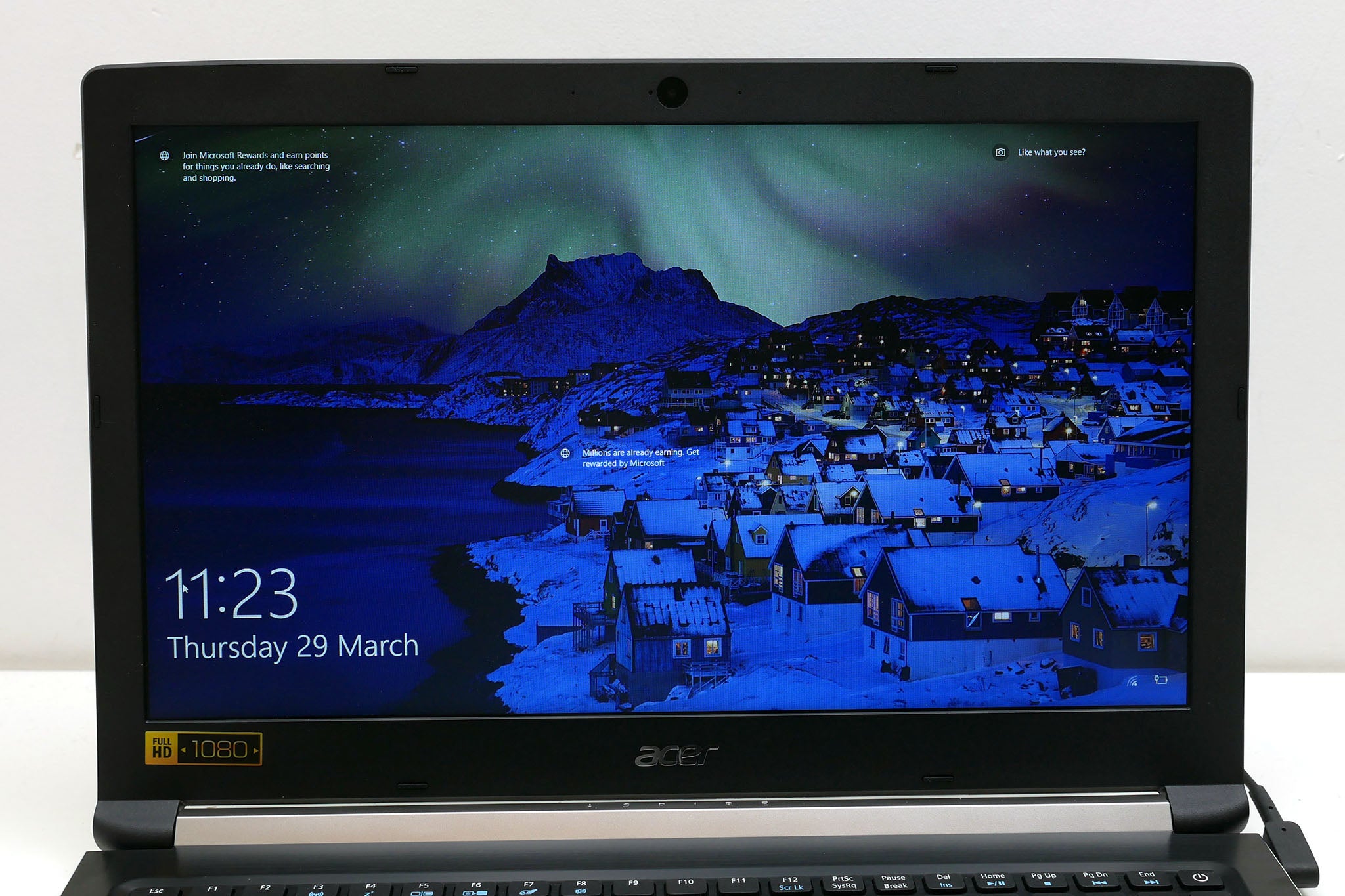 Only when perfectly perpendicular does the image look as it should

These issues are less of a problem for desktop monitors because you generally sit fairly still right in front of the screen. But by the very nature of laptops being portable, it’s far more likely that you’ll be viewing them from an odd angle.

What’s more, viewing angles aren’t the only problem with this screen. In fact, it’s thoroughly basic in all aspects. Maximum brightness of 215 nits is well below the 300-nit mark that’s normally needed for use in bright environments. A contrast of 273:1 is also utterly pathetic, making for a dull, washed-out looking image.

Colour reproduction isn’t much better, either. It manages just 51.9% of the sRGB colour space, although its colour balance is up to snuff. With a white point colour temperature of 6902K, it’s super-close to the 6500K ideal, meaning there’s no blue, red or green tint to the image.

Nonetheless, I’d recommend that unless you’re intent on buying one of the sub-£500 basic versions of the A515-51, you opt for the A517-51 models instead – they include an IPS display. I’ve not tested the quality of that display, but it should at least fix the viewing angles issues, and it’s very likely to offer much better overall image quality too.

As for the audio side of things, there’s nothing special here. You get a pair of speakers that are reasonably clear. There’s no real depth on show, but they get the job done. An external speaker or set of headphones will be a must for extended listening.

When it comes to performance, things will vary considerably depending on the configuration you opt for. Here, we have the very latest Intel 8250U CPU, 8GB of RAM and a 256GB SSD. However, you can also opt for a system with an older Intel processor, one with a 1TB hard drive instead of an SSD (slower but more storage space), and even one with an Nvidia GeForce MX150 graphics card.

With the configuration here you can expect excellent all-round performance for everything but gaming.

In the Geekbench 4 benchmark, its single-core CPU score of 4119 is in line with any other mid- to high-end laptop, while its multi-core score is a massive 13,103. This is a far higher score than previous equivalents to this laptop because this is a quad-core processor, rather than the dual-core of most other older Intel laptops CPUs.

In most day-to-day tasks you’re unlikely to notice the benefit of this extra performance, but as soon as you’re doing some heavy multi-tasking or dip into video editing, the extra power will be welcome.

Less impressive is the SSD. The very fastest models can hit 1000MB/sec read and write speeds, but here you get just 488MB/sec read and 130MB/sec write, according to AS SSD. This remains faster than a hard drive, and as such this laptop still feels reasonably nippy when it comes to booting and loading apps. However, if you’ll regularly be moving large files around, the slow write speed will be a nuisance.

When it comes to gaming, the Intel HD 620 graphics can run most games but performance is limited. A 3DMark: FireStrike score of 1093 is a third that of even a basic Nvidia GeForce GTX 950M (the predecessor to the Nvidia chip available on this laptop), and a sixth of what really high-end graphics cards will deliver.

One area where this laptop really excels is battery life. Despite a powerful CPU and large 15.6-inch screen, it just sips power. In our standard PowerMark battery test – which loops watching 10 minutes of video with five minutes of web browsing (with the screen set to 150nits brightness) – it lasted 8hrs 43mins.

The very best laptops can push beyond 10 hours, but for this calibre of machine this is a great result that should see the Aspire 5 last a working day, or most of a long haul flight. 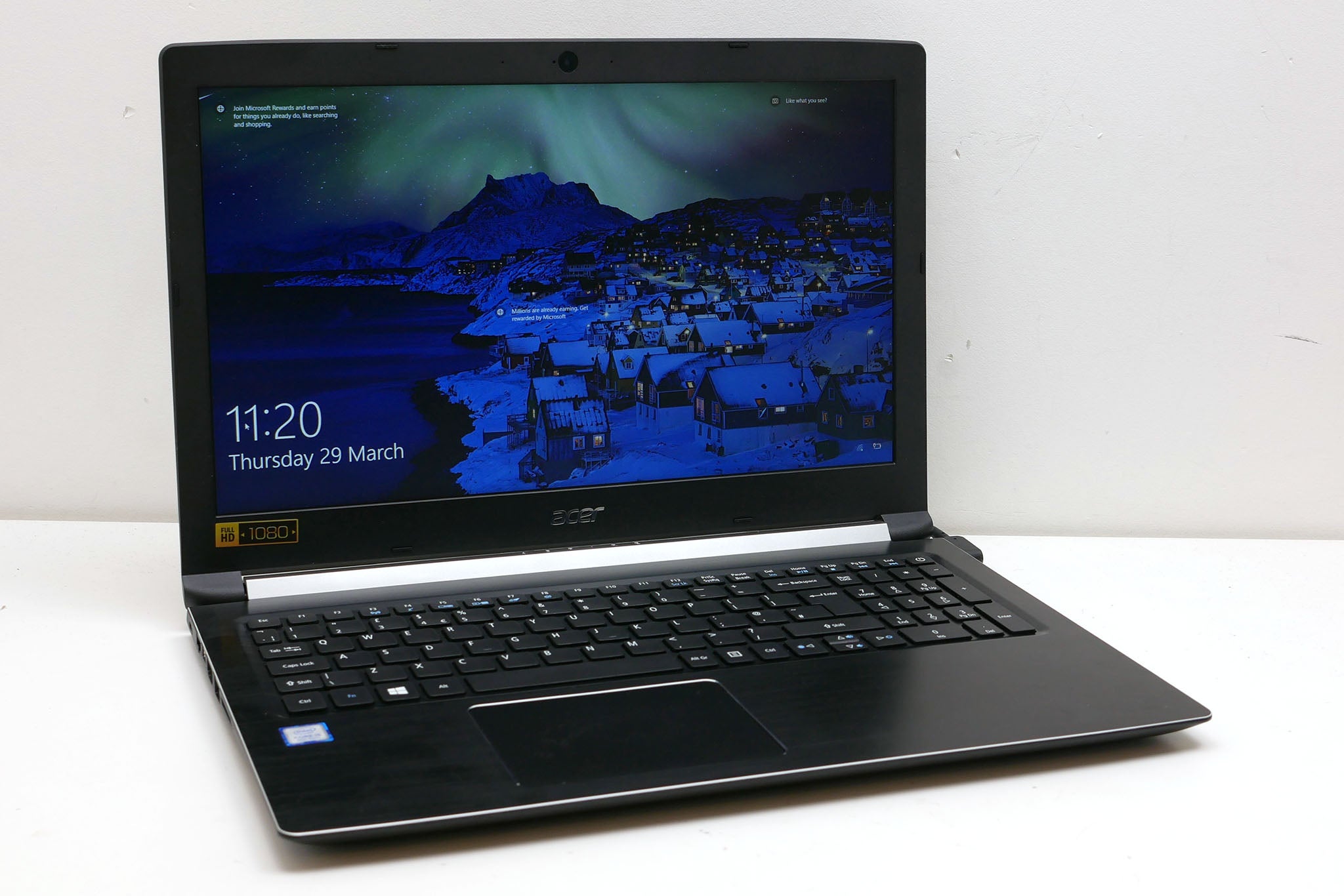 Why buy the Acer Aspire 5?

It’s always the case that the different models of any given laptop offer varying levels of quality and value. However, seldom has there been a laptop where this is truer than the Aspire 5.

Ostensibly it’s a decent laptop, with a nice design, decent build quality, great performance, a nice enough keyboard and trackpad and good battery life. However, because of its poor-quality screen, I wouldn’t recommend spending more than £500 on any variant of the A515 model that I’ve reviewed here. The screen is just too fundamental a part of a laptop to skimp on.

Instead, if you opt for the A517 with its better-quality screen then there are several options that are well worth spending a little more on.

Opt for a model with a 128GB SSD and a 1TB hard drive or the 256GB SSD version, rather than the 1TB hard drive alone. If you’re tempted by a bit of gaming then the models that include an MX150 are well worth a look too.

For day-to-day computing, and even gaming, the new quad-core Intel chip isn’t a necessary upgrade, but for those who are after a more powerful workstation-type laptop, it really does deliver the extra horsepower you’ll require.

A decent quality mid-range laptop – but be mindful of the version you buy.