With all the talk of netbooks and more recently CULV (Consumer Ultra-Low Voltage) laptops it’s easy to forget you can still buy portable laptops and not compromise on performance. Samsung’s excellent Q320 is a popular example, but another is the Acer Aspire 3935, whose 13.3in form factor puts it in the same bracket as the Samsung, the Dell Studio XPS 1340 and the Apple MacBook Pro 13in and the MacBook.


In pure price/performance terms, though, the Acer has all three trumped. Laptops Direct offers it for just a smidgen under £600, which still nets you a Centrino 2 spec Intel Core 2 Duo P7450 that runs at 2.13GHz on a speedy 1,066MHz front-side bus, along with 3MB L2 Cache. This is backed up by 4GB of DDR3 RAM, though disappointingly there’s no 64-bit OS to make the most of the memory. You also get a 250GB hard disk providing ample storage space. In comparison, the Samsung Q320 we reviewed has just 3GB of DDR2 RAM and a slower 2.0GHz Intel Core 2 Duo T6400 that has just 2MB L2 Cache and narrower 800MHz front-side bus. It costs more, too, at around £650 or more depending on where you look. 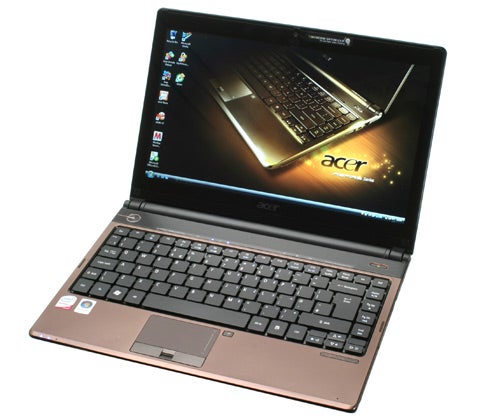 This doesn’t tell the whole story, though, as there are compromises that have had to be made. Whereas the Samsung comes with an optical drive as standard, on the Aspire 3935 it’s optional and this particular version goes without one. This does help keep the weight down to a comfortable 1.9kg, lighter than the Samsung by 300g, but does rather hurt its credentials as an all round computing option. Acer’s effort also plumps for Intel’s distinctly underpowered GMA X4500M HD integrated graphics, so the Samsung’s 256MB nVidia G105M discrete graphics chip gives it another edge. 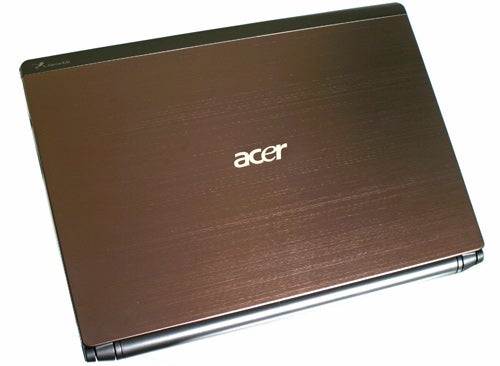 In a sense, then, we’re looking at different horses for different courses. If you’re after a complete, affordable all-rounder then the Q320 is still you’re best bet. If, however, a little more raw performance and greater portability – not only is the Acer lighter than the Samsung, at 25mm vs 36mm it’s also considerably thinner – then the 3935 might be for you.


It helps matters that the 3935 is arguably the prettier of the two. Though the Q320 is no ugly duckling, the brushed metal lid, textured innards and complementary brown and black colour scheme of the Acer make for an attractive, classy looking machine. We can also applaud the complete absence of glossy plastic, ignoring of course the glossy reflective display. One can’t have everything, it seems. 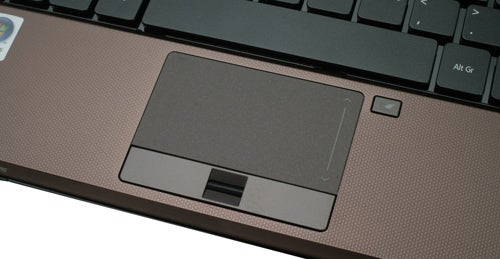 It also has a few extra features worth noting, such as the addition of Dolby Home Theatre processing, as well as neat touch sensitive controls above the keyboard for controlling volume and wireless radios. There’s also enhanced security in the form of a fingerprint reader nestled between the two touchpad buttons, while a power profile shortcut button in the top right provides quick and easy efficiency savings when on battery.

As seems to be the case more often than not these days, little complaint can be made of either the keyboard or touchpad – manufacturers just seem to be getting the basics right now. Acer continues its use of the unique tiled keyboard first seen on its Timeline laptops and to good effect, too. While there is just a smidgen of flex, keys have a very crisp, yet light action that instantly feels comfortable. We have no layout complaints, either. Everything is just where it ought to be, with a nice, large and unimpeded right-Shift key and Home, Page Up, Page Down and End keys running down the right-side. 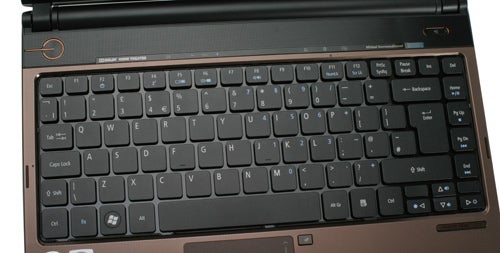 Likewise, unlike some Acer laptops of late, the touchpad is properly positioned slightly off centre, so won’t interfere with typing. Its buttons are of the rocker-style, so don’t respond evenly, but they are very crisp and accurate. You also get a dedicated button for deactivating the touchpad, as has been the case on most Acer laptops of late.


Where audio visual matters are concerned, though, the Aspire 3935 is pretty average – not bad, just average. Its 13.3in display is LED backlit and has a standard 1,366 x 768 native resolution; a comfortable, usable resolution for this size of screen. It’s reasonably bright and colourful, but not outrageously so, while viewing angles are – in common with most laptops – a little on the shallow side. On the whole its fine, though – reflective, glossy finish excepted.

Audio is somewhat disappointingl, though. Like many smaller laptops the 3935 suffers some pretty tinny, powerless integrated speakers. They’re good enough for watching online videos and the occasional TV drama, but for anything else a decent set of speakers or headphones are in order. On the plus side, with Dolby Home Theatre you can get more from these than on many laptops.

It’s really connectivity where the Acer begins to stumble, though. Most of the basics are catered for, with three USB ports, a multi-format card reader, microphone, headphone (with S/PDIF support), Ethernet and VGA all present and correct, but there’s a baffling lack HDMI. There’s no eSATA, either, while none of the USB ports feature the increasingly common and exceedingly useful ‘sleep & charge’ ability.

Looking at the PCMark Vantage performance results, while the Samsung Q320 and the Acer are well matched overall, there’s a noticeable uptick for the 3935 where CPU speed is the main metric. This includes the Music and Productivity tests, where there’s a greater emphasis on multi-tasking, encoding and encryption of data – all major number crunchers. Compared to the dual-core, ultra-low voltage equipped Acer Aspire Timeline 4810T, the 3935 is a comfortable 20 per cent faster overall. 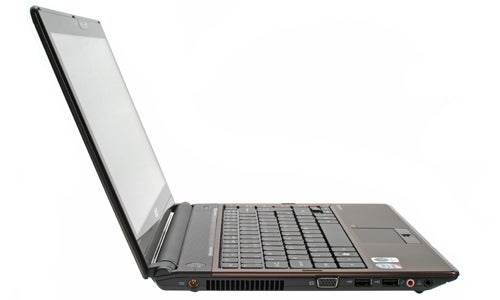 Gaming, of course, is out of the question due the Intel integrated graphics. All the same (just for laughs) we did run our usual casual gaming benchmark, Trackmania Nations Forever. At native resolution and media detail the Acer managed a juddery 15.1fps, only improving to 23.7fps on low settings – hardly rapid.


Given the system comes with a measly sounding 2,800mAh, four-cell battery as standard we feared battery life could be an Achilles heal. Not so, though – underlining how battery and processor technology has progressed of late. In the Productivity segment the Acer managed a creditable three hours, 51 minutes; increasing to four hours, 53 minutes in the low-intensity Reader test. Both results marginally surpassed the Q320, but were comfortably beaten by the slower, lower power Timeline 4810T. 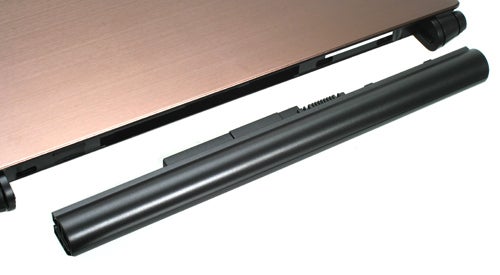 This seals a decent display overall, even if the difference between the Samsung’s gaming performance is still far greater than Acer’s advantage in 2D tasks. However, one benefit – aside from the smaller, lighter chassis – or the lack of discrete graphics or an optical drive is that the 3935 is a very cool and (generally) quiet machine. Only under real stress does the fan become a potential distraction, but heat remains negligible.


Plus, due to the lack of an optical drive, the hard drive has been moved to where it would have been. Not only does this improve heat dissipation, since it isolates one of the hotter components, it also leaves open space for another 2.5in hard drive. 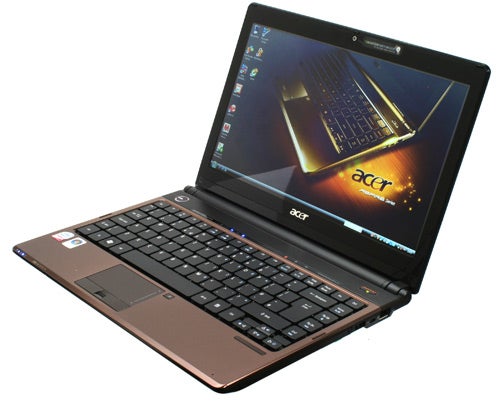 
There’s plenty to like about the Acer Aspire 3935, which makes its deficiencies all the more disappointing. For the money it delivers solid performance (in applications) and good battery life, too, but the lack of HDMI and an optical drive make it an awkward proposition to recommend. Still, while it misses out on a recommendation, if it fits your needs it’s worth considering.

(centre)
Though gaming is off limits, this is a good system for 2D tasks, with snappy performance in CPU intensive tasks. It’s around 20 per cent faster than CULV based equivalents, so offers a significant advantage over them.
(/centre)

(centre)You get a lot more battery life from CULV based machine like the Acer Aspire Timeline 4810T, but nonetheless the 3935 offers good battery life and just edges out the Samsung Q320.
(/centre)