Having only just awarded the Packard Bell EasyNote Butterfly Touch our coveted Recommended Award, we’re now looking at the Acer Aspire 1825PTZ, an 11.6in convertible tablet laptop in the same mould. And when we say “in the same mould” we mean that literally – as Packard Bell (PB) is essentially an Acer subsidiary, the Butterfly Touch and 1825PTZ could have been separated at birth.

However, while they share the same genes these two machines are not quite identical twins. Aside from a variety of relatively minor cosmetic differences, Acer has gone for a different mixture of components, comprising a more powerful processor but a smaller hard drive and less memory, and adding £100 onto the starting price in the process. 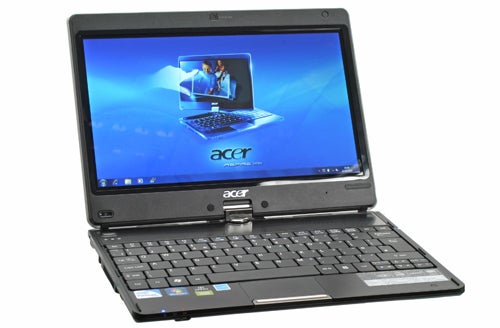 Thus, rather than the Butterfly Touch’s 1.2GHz dual-core Intel Celeron processor, the 1825PTZ has a 1.3GHz dual-core Intel Pentium SU4100 at its heart, which is up to 20 percent faster in our testing. In real world use, however, the only thing we can think of that this CPU can handle that the SU2300 cannot (for the average consumer) would be demanding 1080p video, which is offloaded to the video card anyway when using compatible playback software under Windows 7. Still, far be it from us to complain about a faster CPU!


Acer has compromised by only providing 3GB of RAM, which seems a bit stingy when 4GB is pretty much the minimum standard these days – at least at a £600 price point. It’s even odder considering that the company has elected to go with the 64-bit version of Windows 7 Home Premium for the 1825PTZ, while the Butterfly Touch sported 4GB yet came with a 32-bit OS. This should be other way around, surely?

A 250GB hard drive is also on the small side, though other specs remain the same as on the Butterfly Touch, including the Intel integrated GMA 4500 graphics, Wireless-N Wi-Fi, and the absence of Bluetooth. Connectivity is likewise identical, comprising three USB ports, VGA and HDMI video outputs, microphone and headphone jacks, Gigabit Ethernet and a multi-format card reader.


Visually the piano-black lid of the 1825PTZ is fairly nondescript, and we prefer the chromed inset on the Butterfly Touch. Both are equally susceptible to fingerprints and dust, though – a common complaint among laptops these days. 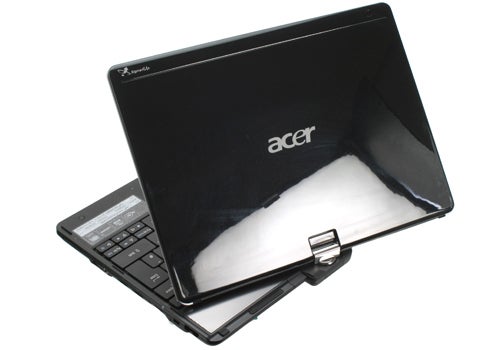 It’s the interior where we begin seeing some real design differentiation. Specifically, the screen’s bezel is largely matt and textured rather than glossy, with only a narrow shiny strip right around the screen’s edge. We definitely favour this more rugged finish, as it means you’ll get far fewer fingerprints than on the Butterfly Touch when using the laptop in tablet mode.


On the other hand, we definitely prefer the Packard Bell’s softer, textured palm-rests to the hard, smooth plastic ones found here. On balance, however, we would say Acer wins out slightly in the looks department, though there’s very little in it really.

Like the Butterfly Touch, the keyboard on the 1825PTZ offers an excellent layout and is generally quite nice to use. However, due to feedback being just a tad too shallow – in addition, oddly, to a little more flex than we noticed on the PB – it isn’t our preferred choice for long typing sessions. 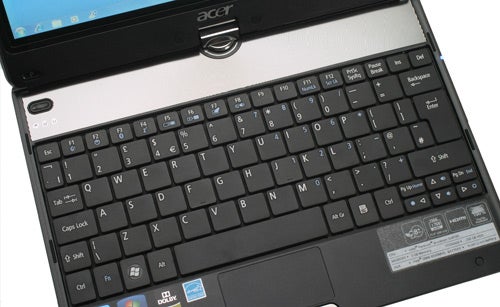 Likewise the touchpad doesn’t feel quite as responsive (in multi-touch gesture controls especially), but whether this is due to its coating or different sensitivity settings is difficult to say. Don’t get us wrong, though; it’s still great to use and its buttons are just as pleasant and positive as those of its sibling.


On the audio front, the 1825PTZ performs just as impressively as the Butterfly Touch. Its Dolby Sound Room-enhanced speakers manage remarkable volume levels for the laptop’s size, with clear mid and high-end and even some decent bass.

Unfortunately Acer doesn’t offer a matt screen option to go with its largely matt bezel, so any ambient lighting will lead to distracting reflections. Aside from this the convertible’s 11.6in screen, with its 1,366 x 768 resolution, is decent. As usual with laptop panels, it’s weak on vertical viewing angles and dark detailing, but makes up for this by offering even backlighting, good sharpness and truly excellent horizontal viewing angles, aiding its tablet appeal.


Our experience with touch, and using the 1825PTZ in the unique ways its swivel screen allows, was essentially identical to that provided by the Butterfly Touch, so if you want to get the full story we recommend you give page three of that review a look. 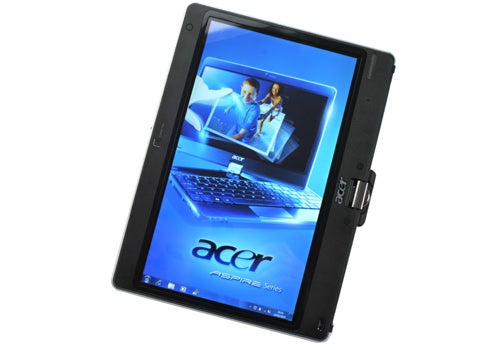 In summary, though, the form factor offers a few worthwhile advantages over a standard laptop. In particular the ability to view documents and web pages in portrait mode is very useful, while the multi-touch enabled screen itself is highly accurate and sensitive to the touch. Its only disadvantage is it can’t be used with an ordinary digitiser pen, though you can buy capacitive-enabled styli should you wish to use one.

Compared to the Butterfly Touch’s slightly underpowered dual-core 1.2GHz Intel Celeron SU2300, the Acer’s dual-core 1.3GHz Pentium SU4100 offers noticeably better performance across the board. However, the PB machine performs well enough for most common tasks and applications, and we dislike the compromises in memory and hard drive space Acer has had to make to accommodate the faster processor.

Its faster CPU doesn’t help the 1825PTZ much in gaming either, as Intel’s integrated graphics only managed a pitiful 12.2fps in TrackMania Nations Forever – in other words, a 3D gaming laptop this is not.

However, its CULV CPU combines with the frugal graphics to give this laptop identically impressive seven and a half hour battery life to its sibling – hardly surprising considering it sports the same 5,600mAh/63Watt-Hour battery. You’d have to be very demanding for the 1825PTZ not to last a whole day on a full-charge, which is a great feature to have from a machine you’ll want to carry around with you on a regular basis.

Obviously, the 1825PTZ’s biggest competitor is Acer subsidiary Packard Bell’s Butterfly Touch, since as already mentioned the machines differ only in a few aesthetic touches and internal specifications. Unfortunately, the Butterfly Touch has gone up in price since we reviewed it, but either way the 1825PTZ is still at least £50 more expensive.


Were all else the same, its faster processor would be worth this premium, but regrettably Acer has also cut back on the RAM and hard drive space. Considering the Butterfly Touch’s CPU can handle everyday applications and tasks just fine, and with the additional benefits of its softer palm rests and the pre-installed copy of Adobe Photoshop Elements 8, it wins the shootout hands-down.


On its own merits, the Acer Aspire 1825PTZ is a great little convertible tablet laptop and not bad value. However, the almost identical Packard Bell EasyNote Butterfly Touch simply offers more for the money, so unless a faster CPU is worth more to you than additional RAM and hard drive space, it’s the better option. 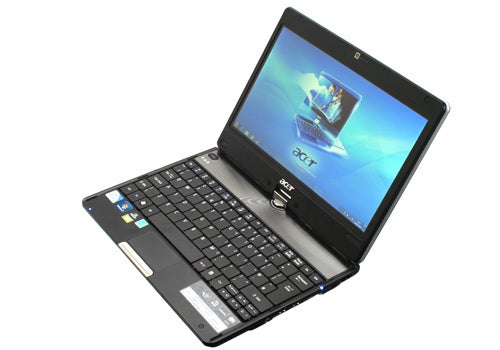 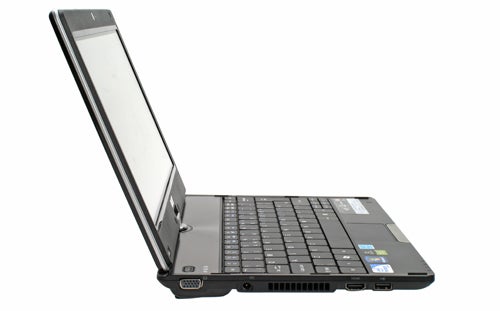 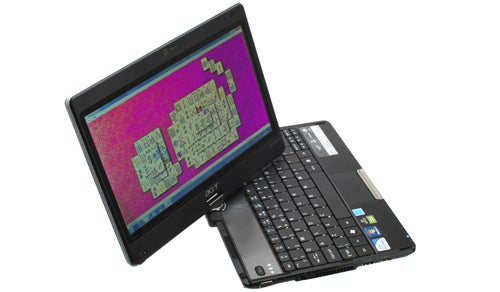 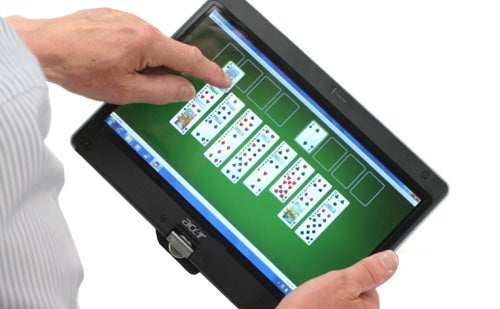