The burgeoning home and small business NAS appliance market is now so lucrative that many manufacturers that have traditionally avoided this area now can’t resist its allure. We saw the mighty Hewlett Packard sneak in recently with its MediaVault mv2020 and now notebook supremo Acer steps up with the Altos easyStore.


At their foundation most NAS appliances are simply standalone boxes that serve up shared storage to the network. Some do it much better than others – take Netgear’s ReadyNAS NV for example – but the easyShare holds a few more aces in its hand that makes it quite unusual. Along with basic NAS functions the appliance offers slick data protection facilities and bare metal restoration tools. What’s even more interesting is it does it over iSCSI (Internet SCSI) – a protocol not normally supported by budget priced NAS appliances. 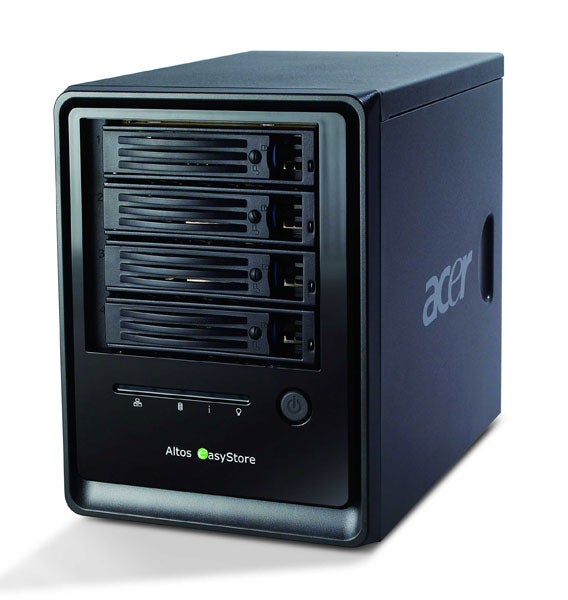 This isn’t a new concept and we’ve already seen an earlier version of this when we looked at the Escon (formerly LapiStor) RAIDMate NAS, which is also used by Intel for its Entry Storage System SS4000-E. By using the later model the easyStore offers a better specification and build quality is also superior. You get a 600MHz Intel XScale processor in the driving seat, which is teamed up with 256MB of memory. The Linux based operating system is held on 8MB of Flash memory but Acer doesn’t currently offer a diskless version of the easyStore.


The bundled Storage System Console automatically locates the easyStore appliance on the network and offers quick access to its web console. This is well designed and kicks off with a wizard that helps with array creation and you can choose from RAID-0, -1, -10 and -5 and for the later you can have a triple disk array and hot-standby. Next, you decide how much space to set aside for shares and workstation backup. It’s easier at this stage to leave shared space at the default value of 200GB as you can expand this into unused space later on when you know how much room your backups will take.


NAS features aren’t particularly exciting with the appliance supporting Windows, Linux and Macintosh clients. Local user and group membership sorts out share read and write access privileges and we upgraded the easyStore with the latest firmware to enable it to support Active Directory. The appliance can act as an FTP server but you can only publish the default public folder and each user’s private folders.

Workstation backup is handled by FalconStor’s DiskSafe Express utility although only providing a two-user license is a bit mean. Before you install it you’ll need to download the latest iSCSI initiator from Microsoft but it’s not a problem if you’re unfamiliar with iSCSI as once the software has been loaded DiskSafe handles all target identification, logon and virtual disk mounting for you. From the DiskSafe interface you decide which drives or partitions you want to protect, select the easyStore appliance from the list, provide a password and set a backup schedule. Note that the remote backups can only be accessed using the DiskSafe software and only four versions are supported, which means you’ll only have four days worth of protection if you run daily backups. When DiskSafe fires up a backup it logs on to the iSCSI target presented by the appliance, mounts the virtual drive and secures the selected drives or partitions to it. This is all handled in the background so you don’t need to get involved at all.


For testing we used a SuperMicro 3GHz dual Xeon 5160 server running Windows Server 2003 R2. Backup is a lengthy process as copying a 7.8GB system partition over Gigabit Ethernet took 16 minutes for an average speed of only 8.3MB/sec whilst a 50GB data partition returned 13.5MB/sec. However, from this point on all subsequent backups only secure new data so are a lot quicker. With an extra 23MB of test data added to our system partition we watched DiskSafe complete the next backup in only three minutes. 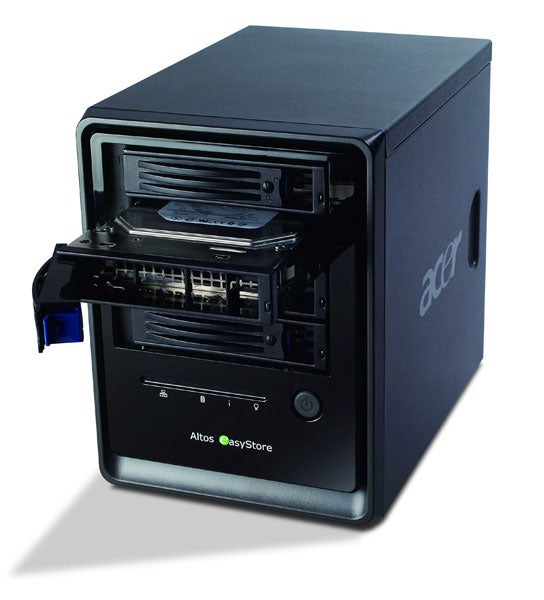 File and folder recovery is nicely handled as you select a backup from the DiskSafe interface whereupon it logs on to the relevant target causing the backup to appear as a local drive with a new drive letter. You can then use Windows Explorer and copy data back across using drag and drop. You can also restore an entire non-system drive from here as well. The bare metal recovery process starts by booting the PC from the supplied CD-ROM which loads FalconStor’s recovery environment and iSCSI initiator. You enter the names of the appliance and PC, provide the password and then you can select a partition to restore. We found the process went very smoothly and were able to restore our 7.8GB system partition back to active duty in only sixteen minutes.


As a NAS appliance the easyStore leaves a lot to be desired as its features are very basic. Nevertheless, it offers plenty of storage for the price and its iSCSI based data backup and bare metal recovery features make it a unique proposition.

(centre)The web management interface is a tidy affair and opens with a complete storage status.(/centre)

(centre)RAID setup is handled by a wizard and you have plenty of array types to choose from.(/centre)

(centre)The appliance keeps track of backups and allows administrators to change their passwords.(/centre)