If you’re in the market for a new monitor the chances are that a 22in widescreen display will be on your list, with virtually every monitor manufacturer now offering a display at that size. Widescreen is definitely the way to go – applications such as Outlook or Thunderbird really make good use of the extra space as does something like Excel. As for games, all titles released under Microsoft’s recent Windows for Games initiative have to support widescreen monitors. Equally, Vista’s Sidebar feature makes most sense on a widescreen display. I think you get my drift. Widescreen is most definitely a Good Thing. 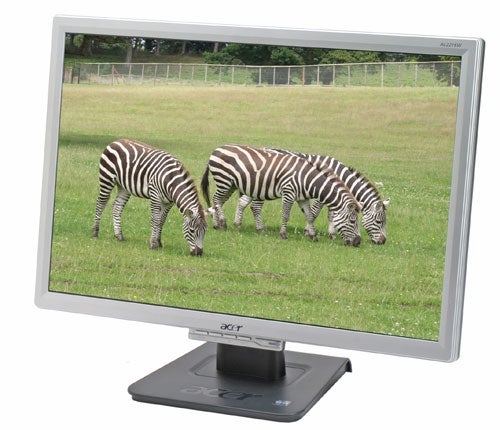 However, with so many other 22in displays now on the market the Acer has its work cut out to make its presence felt. I’m not sure that the styling is going to help in that department. Its dull silver plastic bezel with an angled inner frame gives the whole display a rather dated look, while the OSD buttons under the bezel also look cheap. The OSD itself sports an attractive looking design and is straightforward to navigate. Press the Auto button and you get five presets, User, Text, Standard, Graphics, and Movie. These are self explanatory and I’ll describe the effects further on in the review. Press the menu button and you’ll find that there aren’t many options, especially if you’re connected via DVI, as there’s no need to adjust the tracking. The OSD doesn’t let you choose between the industry standard colour temperatures but you can also choose between Cool and Warm image settings, which seems to be a choice between having a picture that’s too yellow or one that’s far too blue.

There’s no height adjustment, or pivot, and these no clever rotating stand as there is with the Viewsonic VG2230wm. At least setting up is nice and simple, you just click the display into the oblong space on the stand and you’re ready to go.

Round the back you’ll find a DVI and VGA port and power. Unfortunately, the DVI connector isn’t HDCP complaint, which straight away is going to put a lot of people off as you’ll be unable to watch HDCP protected Blu-ray or HD DVD content using this monitor, which might well seem a waste of 22in of display. There are no other connections and no built-in speakers.


Stylistically and feature wise then, the AL2216W doesn’t really set the pulse racing. Can it make up for these shortcomings with a stonking performance in the image quality? In a word, no. 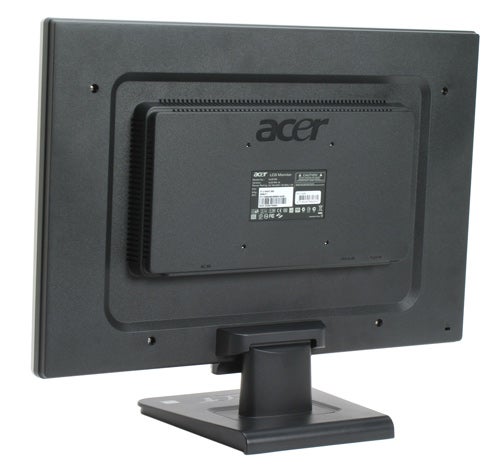 The Acer is based on a TN panel offering 6-bits for each colour – that’s a maximum of 262,144 colours, which uses dithering to reach 16.2 million colours – as opposed to ‘true-colour’ which would be 8-bits per colour delivering 16.7 million colours. It is possible to deliver convincing colour from a 6-bit panel, as proved by the IIiyama ProLite X486S-B1 but the Acer didn’t match this.


Connected up by DVI, the display is sharp enough and thanks to the generous pixel pitch, text is always easy read. However, in general, pictures were on the dull side, lacking warmth and richness. From the presets I mentioned earlier Standard and Graphics lighten the image but these seemed merely at the expense of contrast. Movie mode tones it down again, and some might find this to offer the best balance of brightness and contrast.


I spent most of my time with this monitor, using it for general office tasks – email, documents, web browsing and for these tasks it was satisfactory, if no more. However, I was sent a link to an amusing video which generated one of those ‘everyone in the office crowd round a monitor moments’ and this soon highlighted one of the major drawbacks of the screen – the poor viewing angles. The screen is based on TN technology, which never has great vertical viewing angles, but in the case of the AL22126W it seems the horizontal angles aren’t up to much either. All those wanting to view the video had to stand directly behind me, as viewing from the side causes a huge amount of colour shift. Blue turned to purple, white turned to yellow. 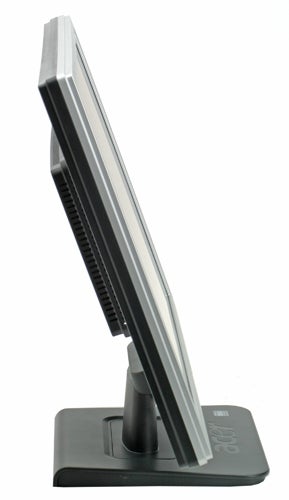 It’s was the same with images. My immediate comparison was a 24in Dell 2407 display, which I don’t consider to be the last word for colour or detail, but it was noticeably better than the Acer. Even sitting directly in front of it video playback is no more that adequate. With black areas no showing that much detail and colours muted and lifeless. It’s very much the same thing with images – the monitor severely lacks colour vibrancy.

The theme continued in games. To test I fired up one of my favourites – Trackmania Nations ESWC, which is fun, colourful and fast – a good test for a monitor’s gaming performance. The monitor advertises a response time of 5ms, and certainly gameplay was completely smooth to my eyes. However, the old bugbear of colour reared its head. Trackmania has a lot of vibrant green in it, but on the Acer it doesn’t really have much impact. It fact, they’re positively dull. 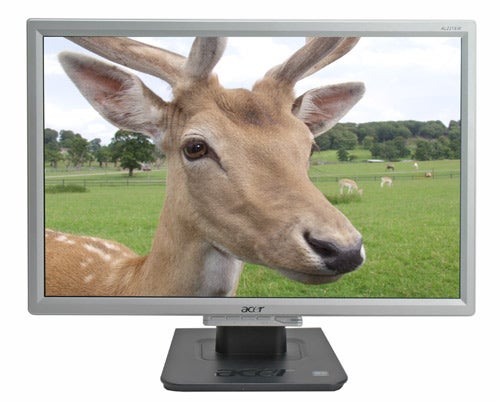 The final test was putting the display through DisplayMate, a set of tests designed to highlight any weaknesses in a display. It certainly emphasised the problems I found in my subjective tests. Where the screen did well was in the sharpness and the 256 Intensity Level Colour Ramp – which was smooth and even, with no banding evident. However, in the colour uniformity test this was visible lighter patches, with darker seems of colour towards the bottom. The Colour scaling tests was handled well in Text and Standard modes, but choosing the Graphics or Movie presets, really revealed what these modes are about. On the far left, the blacks were no longer intense while in the two or three blocks became completely washed out. It’s trying to compensate for the lack of colour vividness by boosting brightness, but all it’s really doing it taking away detail.


The problem with the AL2216wis that it’s not really great at anything at particular. It’s adequate for general office work and web browsing, but you don’t buy a 22in widescreen monitor for office work and web browsing. As soon as you start to venture into those other activities such as playing video or games its deficiencies start to become apparent. It’s much cheaper than the competitors, as the Miria matches it for price.


The concern with the AL2216W is that the design and picture quality clearly hint at a product being designed to hit a price point. Design is uninspiring, connectivity is poor (no HDCP) and picture quality is just ok. This monitor truly shows that colour vibrancy and contrast ratio are a lot more important for enjoying images than just a low response time.


If you’re in the market for a 22in screen I could only recommend looking at spending more on the IIyama or Viewsonic. Of course, if you truly value quality and connectivity over size you’ll look at something like the Samsung 215TW, assuming you’ve got the budget.