It’s safe to say that combat flight games are no longer the big deal they once were over here. When I first got into PC gaming circa 1993, the likes of Falcon 3, Strike Commander, Comanche, Aces over Europe and TFX were as big as today’s blockbuster shooters. Now, they’re a bit of a niche taste. There hasn’t been a major PC combat flight game released for years, and while a few gamers still enjoy online dogfighting or maintain an interest in the likes of the ageing IL-2 Sturmovik series, they are in the minority. Oddly, it’s been left to a handful of more action-oriented console games – most notably Namco’s Ace Combat series – to keep the genre alive. 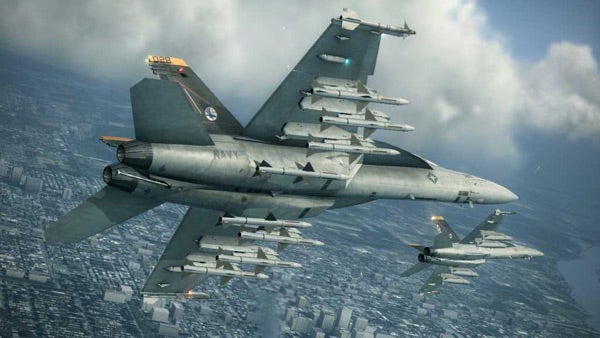 Well, whether – like me – you have a hankering for that older, golden era or you just want a slice of Top Gun action, Ace Combat 6 is a great opportunity to get reacquainted with the joys of the Split S or the Hammerhead Turn. You couldn’t by any stretch of the imagination call it a flight sim, but it’s a fantastic game of air-to-air and air-to-ground combat.


In fact, as anyone who is familiar with the series can tell you, gritty realism isn’t Ace Combat’s thing at all. While it incorporates real aircraft – the F-16 Falcon, the Mirage 2000-5 and so on – Ace Combat 6 focuses on a war between two fictional, vaguely Eastern European countries. Following a military takeover, the Republic of Estovakia invades the peaceful Republic of Emmeria with a sneaky surprise attack. As a pilot in the beleagured Emmerian forces, you play a key role in the fight back against the Estovakians. Frankly, you can safely skip the rather mawkish cut-scenes between each battle if you’d rather not get too involved in the lives of grief-stricken mothers and injured veterans, but at least it avoids some of the more distasteful aspects of the old-school ‘Let’s bomb Russia/Iraq/South America and save the world in the name of freedom’ plots we used to get in US military sims. 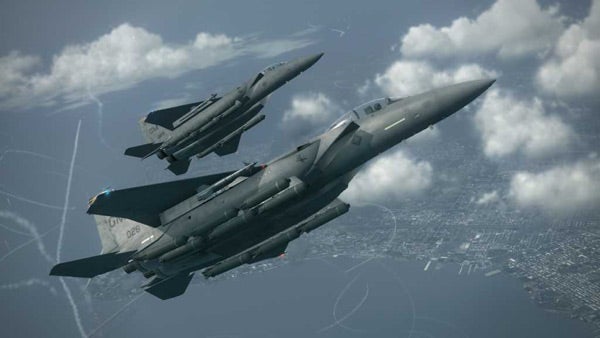 And the reason you needn’t worry too much about the storyline is that, while the use of radio chatter and dialogue certainly adds to the in-game atmosphere, Ace Combat 6 doesn’t really need a strong plot to dish out the thrills. Each mission sees you and your wingman, with support from assorted air and ground forces, blowing huge quantities of fighters, bombers, tanks, helicopters, heavy artillery and enemy facilities to kingdom come using really rather silly amounts of ordinance. As much of this involves flying low over difficult terrain and the aforementioned targets are trying to do exactly the same to you and your comrades, there really isn’t much time to worry about motivation in the heat of battle.

Having had five instalments plus various side-games to polish the Ace Combat formula, Namco has transformed the old combat flight sim into a game that balances complexity and accessibility with understated brilliance. The flight dynamics aren’t remotely realistic, yet each plane you can fly has its own distinctive feel, and the combination of the left analogue stick, the triggers (brake and thrust) and the bumpers (rudder controls) gives you enough scope to pull off some fast and furious manoeuvres. 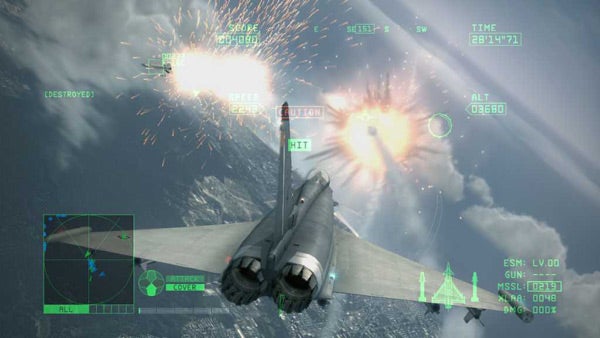 Selecting weapons, cycling through targets and changing the view on your radar display is a lot easier than it was in the days when you needed a keyboard overlay just to remember what keys to press and when. On-screen indicators are fantastically intuitive, and it’s never hard to find your next objective or track the enemy fighter who just flew past you at several hundred miles per hour. But the really nice thing about Ace Combat 6 is that it has built a certain amount of tactical depth into each mission without adding too many features that would over-complicate the game.


The key thing here – and a new addition to the series – is the concept of a living battlefield. This isn’t a new thing for serious combat flight games, but in Ace Combat 6 it means that, while you’re flying around, friendly and enemy units are fighting their own fights and following their own objectives in the skies around you and on the battlefield below. After the initial settling in missions, each campaign mission offers you three or more operations going on at any one time, each with multiple objectives (clear a path for this tank squadron, attack the anti-air defences so our support craft can pass) that need to be completed. 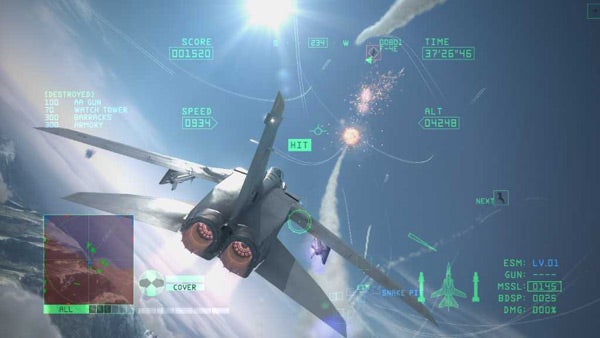 The trick becomes prioritisation. If certain friendly units fail or are destroyed, the mission ends, so you need to ensure that you spread yourself around enough to keep everyone going without spreading yourself so thin that you don’t do any one job properly. In the meantime, events may be triggered that have serious repercussions on the ongoing battle, so you need to stay flexible enough to react.

What’s more, Ace Combat 6 also throws in the idea of electronic support planes which enhance the tracking capabilities of your guided weapons within a certain radius while diminishing the same powers of your foes. Sticking close gives you a real boost, particularly against multiple opponents, but you have to balance that against the need to get to specific objectives. In other words, beneath its superficial arcade game surface, Ace Combat 6 isn’t actually that short on depth. 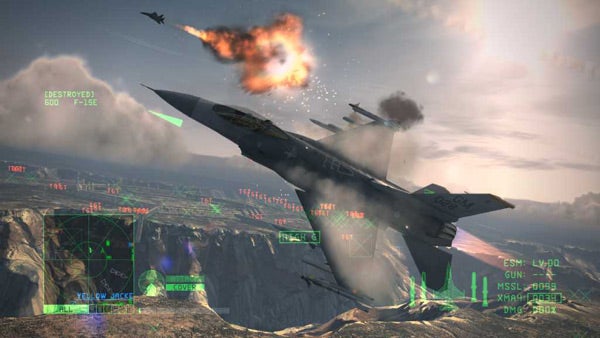 This is good, because the air-to-air and air-to-ground combat is pretty simple. In most cases you’ll use guided missiles, smart bombs and cluster bombs to destroy airbound foes or soften up the ground forces, and neither offers a great deal of resistance unless you’re dumb enough to engage huge numbers with a direct full-frontal attack. Individual fighters put up more of a fight, which is where those dogfighting skills come in handy, but even here there are weapons and fairly simple tricks you can use to gain advantage. 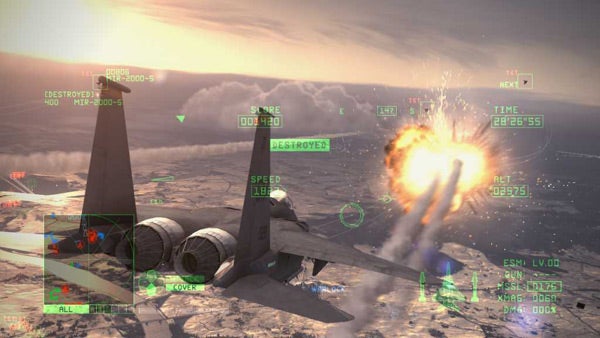 You have ludicrous supplies of ammunition, and a rapid refill is rarely further than a few minutes travel from the frontlines away. Things only change when you meet opponents from the crack Estovakian Strigon squadron or when you encounter the game’s most fantastic elements: its fortress-like cruisers or super-weapons. Facing the former, you’ll need a few more flying ace tricks at your disposal. Facing the latter, you’ll find the game takes on a more sci-fi/anime feel than you might be used to, but arguably it’s none the worse for that. 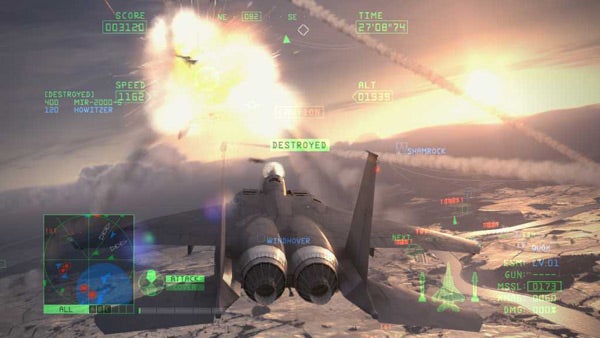 The plus side of all this simplification is that the game maintains a strong pace and dishes out a pretty consistent supply of thrills. The makers of TFX and Strike Commander understood that there was something exciting in hugging the terrain in a supersonic aircraft and dispatching a squad of tanks before they even knew it was coming, and Ace Combat 6 only takes this to its logical extreme. Sweeping through some gorgeous alpine valley laying waste to whole armoured regiments never gets old. Nor does scrambling desperately from one bomber squadron to the next to prevent your city getting laid to waste, or spearheading a dramatic beachhead assault on the enemy’s sea defences. You get all the action, without any of the stuff non propeller-heads find dull.

And what makes this work especially well now is the vastly improved graphics made possible by the move to the Xbox 360. Frankly, I haven’t seen a flight sim look this good on any platform, with detailed, beautifully modelled planes and a landscape that combines aerial and satellite photography, overlaid architecture, rugged topography and gorgeous atmospheric haze and lighting effects. It all looks effortlessly cinematic – as you’ll see when you enjoy the racing-game style replays you get after you’re shot down or when you complete a mission. 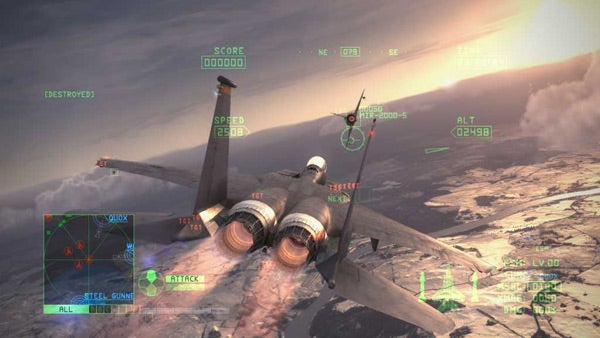 If you loved Top Gun – and not in the ironic, gay subtext way that everybody seems to do these days – you’ll spend hours just flicking from one camera angle to another to watch your plane skim the trees or things blow up before you. True, the ground looks a little like Google Earth when you get too close to the surface – though the lighting and water effects mean it looks an awful lot better – but 99 per cent of the time Ace Combat 6 does for the combat flight games what G.R.A.W. did for the military shooter. 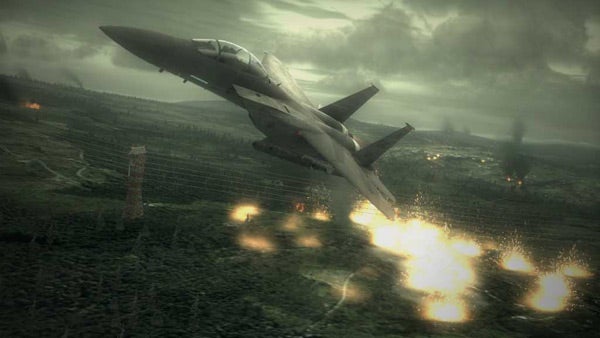 Any complaints? Well, it can get a bit repetitive, particularly when the game focuses heavily on supporting ground-based operations for a while. I’d also like to see more in the way of mid-mission checkpoints. The old ‘crash and burn’ routine is always heartbreaking, but it’s especially so when you know you’ll have to repeat the last twenty minutes of the mission for the third time running. Finally, it’s not the most newbie-friendly online experience. The various deathmatch and team-based battle modes work brilliantly, and the dogfights seem fluid and lag-free, but your chances of surviving in skies dominated by Japanese and US hotshots long enough to get to grips with the game are pretty minimal – or maybe that’s just me. 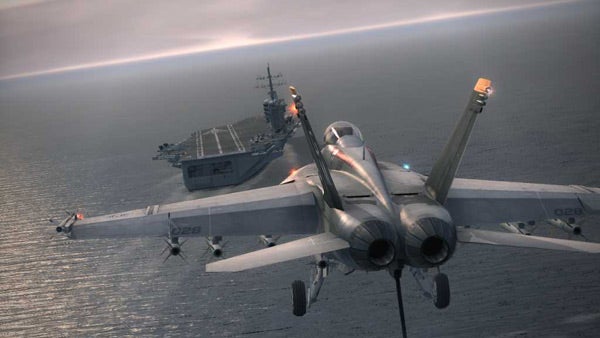 Overall, though, Ace Combat 6 is a bit of a winner. After months of playing racing games, 3D shooters, platformers and RTS games – even when so many of them have been so great – it’s sometimes good to get your mitts on something different and be reminded of how enthralling a great flying ace game can be. There’s a good chance you might not connect with it in the same way, but if you miss the likes of Falcon 3 or Strike Commander or have just steered clear of the series before now, Ace Combat 6 could be a revelation.


A hugely enjoyable piece of high-flying hokum; overblown, unrealistic but surprisingly entertaining. Take to the skies!