Accounting+ is weird, but then it’s weird in the way you might expect from William Pugh, who worked with Davey Wreden on The Stanley Parable, and Rick and Morty co-creator Justin Roiland. An expansion of the duo’s previous HTC Vive collaboration, Accounting without the plus, it’s a foul-mouthed, childishly gruesome, spectacularly obnoxious VR experience that you’ll push through in roughly half an hour. That might not sound so great, but Accounting+ gets away with it because it’s so strange, so confusing and frequently very funny.

I’m not even sure I can describe what happens, but here goes. You are an accountant and after a little training in the basic controls, you find yourself stuck behind a desk ready for your first experience of VR accountancy. Only, you have to find the console and the cartridge first. Clear your desk – just throw everything off – then ransack the office, searching for the cartridge. Find it, don the headset and you’re good to go.

From there, it all just gets odder, like a surreal VR version of Inception where you keep going further into layers of simulation, and where the situations grow ever more insane. You’ll become an unwelcome guest, a new recruit to a teenage gang, a participant in some kind of evil ritual or the defendant in a crazy trial. With each successive scene your only role is to perform the handful of actions that are needed to move on to the next scene, picking up and manipulating key objects, interacting a range of oddball characters until you do whatever it is the game has in mind. 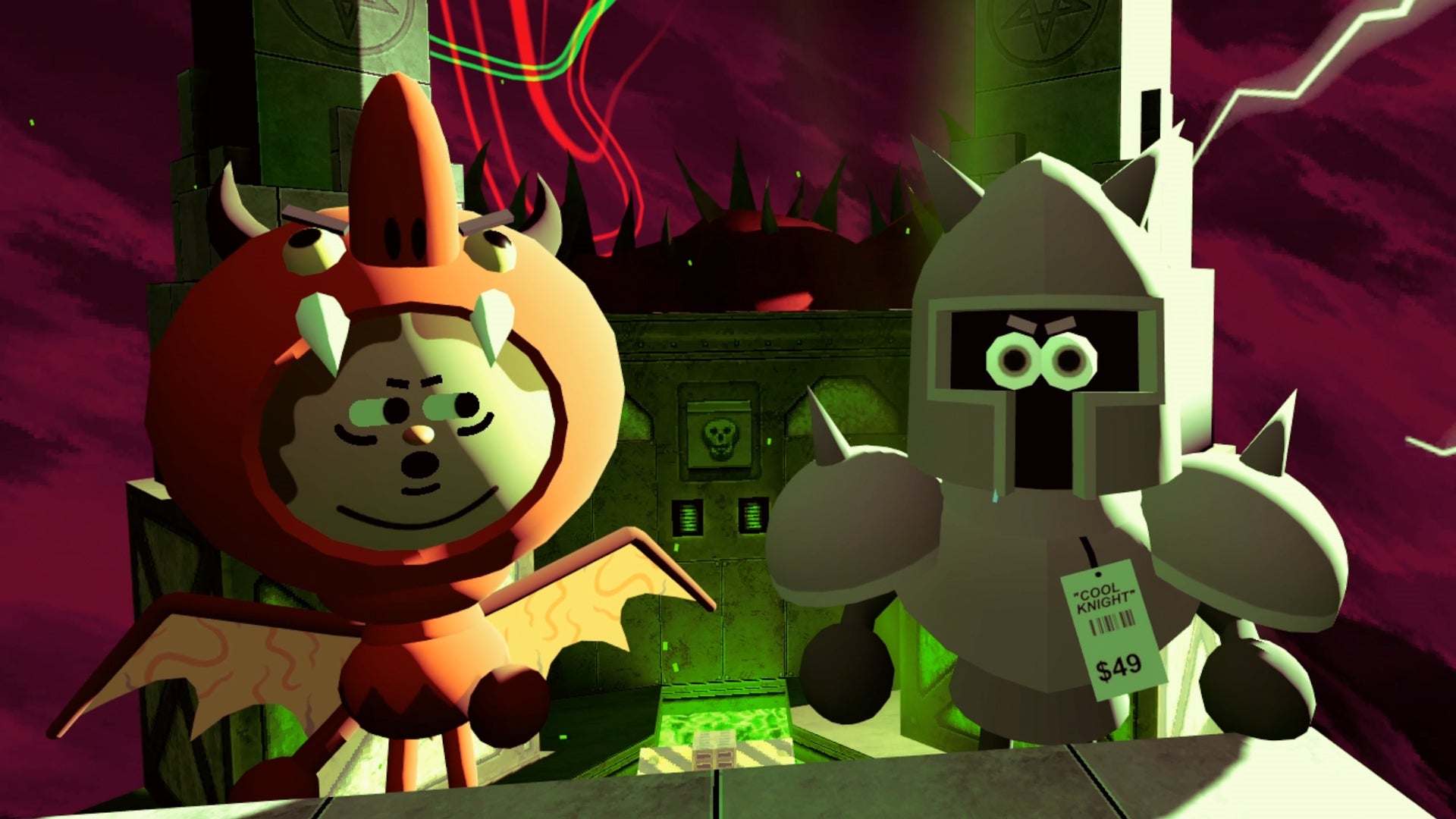 One thing this isn’t is a VR Stanley Parable. The activities are pretty basic and the narrative trickery thin on the ground. Go in expecting complex puzzles or action set-pieces and you’ll just end up baffled and bewildered. You never have to do anything more than find a certain object and use it in a certain way, and often what you have to do and why makes no sense at all.

In fact, your biggest challenge is wrestling with the game’s Move-based motion controls, which sometimes seem to make something as simple as throwing a brick oddly tricky (though your experience may vary).

If you’re stumped, it’s usually because you haven’t discovered the right object or because you haven’t completed the task that will make it appear, even if that task itself seems completely unimportant. In fact, you could probably knock out a complete walkthrough for the game on a single sheet of paper and, bar a couple of really bizarre and unsettling moments, it might actually sound quite boring. 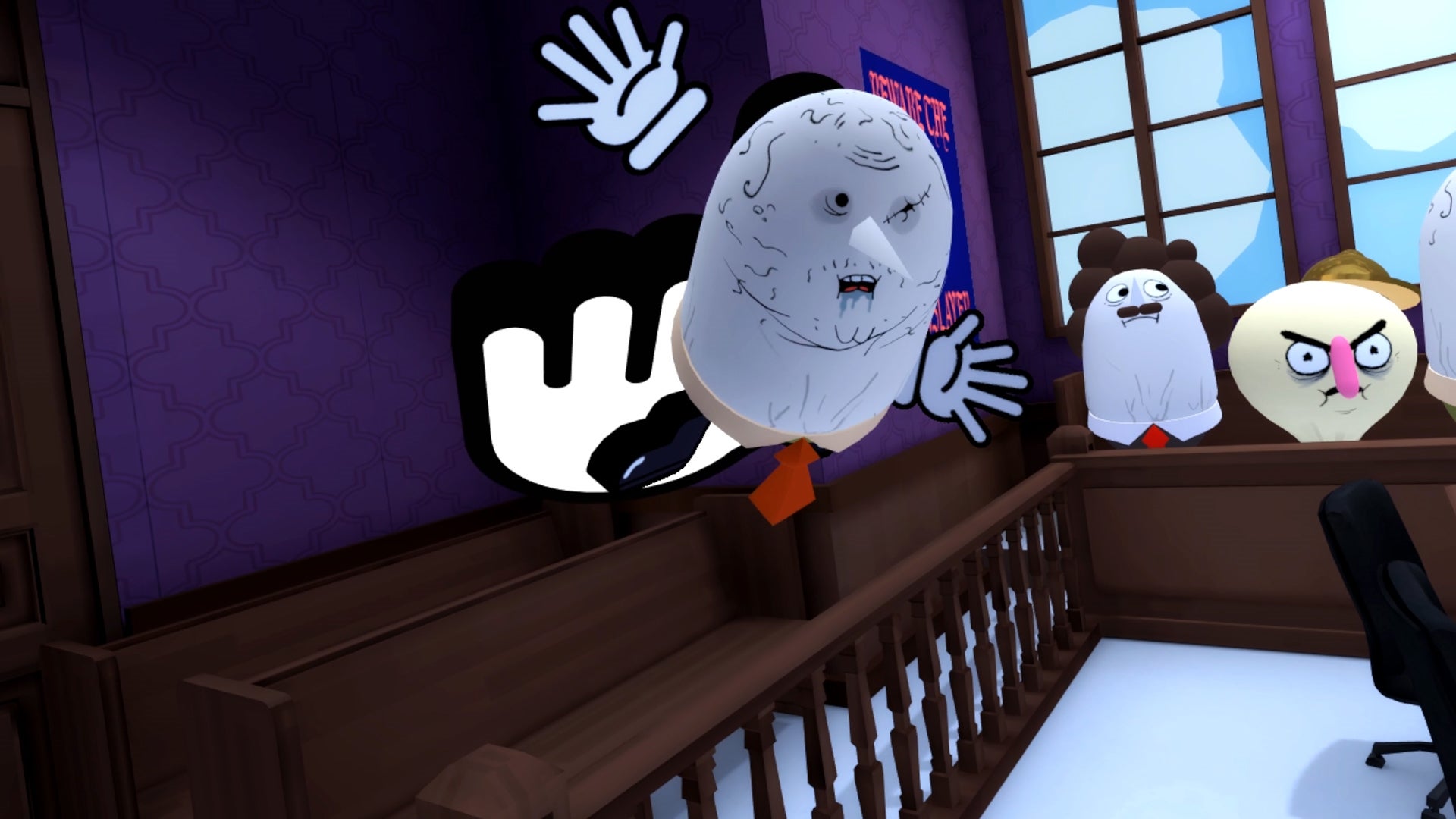 It isn’t, though, and that’s because the tone, the visual style and the use of audio and dialogue creates something more sinister and darkly witty. From the start, Accounting+ is a game that likes to harass you, swearing at you, expressing disappointment in your efforts and featuring several characters who seem to exist purely to tell you, in no uncertain terms, that you’re not welcome. There are scenes where you trying to hear one character’s instructions while another is busy screaming in your ear, and other scenes where you’re trying to work out what you’re meant to be doing, but there’s so much background noise that it’s hard to think.

And in its own gruesome, rude-tempered, sweary and sadistic way, it’s also pretty funny. A lot is made of the mix of low-fi cartoon characters and bad language, but Accounting+ is packed with cruel and unsettling moments which make you chuckle. There’s even something artsy about the way it invites you to do awful things just to move the game on, because that’s what you do in a VR game, right? I’m not going to seriously suggest that it’s a critique of the medium, but there’s a little more going on here than cheap shocks and slapstick violence – though there is a lot of both on tap.

All the same, it’s a pretty tough game to recommend. At times I found the controls for teleportation around each scene and manipulating objects infuriating, and as an experience it’s intense but very short-lived. Sure, it only costs a tenner and the brevity means it’s done before you get a chance to get bored, yet I can’t help wishing that some of the creativity and imagination that went into this had resulted in a game with more meat. Much as I enjoyed Accounting+ the first time, it’s not an experience that stands up to second outings, let alone thirds.

What we have here is a unique, bizarre and funny VR experience that’s well worth playing, but not quite so well worth buying. It’s one of the most obnoxious and wilfully offensive games you’ll ever play, but it’s also short and insubstantial, leaving you wondering ‘is that really it?’. Get a mate with PSVR to cough up, have a quick go and you’re laughing, but you might want to think twice before splashing out yourself.