Over the last few months we’ve been steadily working our way through reviewing motherboards based on the full range of AMD chipsets. We started by looking at the flagship, AMD 790FX, the glamorous feature of which is its support for four graphics cards working together in Crossfire X. Since then we’ve moved down the performance ladder looking at 790X, which can handle ‘only’ two graphics cards, and the baby of the bunch, 780G. However, along the way we’ve managed to miss one out. So, today we’re going to round things off by taking a look at 770, in the form of the Abit AX78.


It’s an AM2+ motherboard with support for up to 8GB of DDR2 memory in four slots. PCI Express 2.0 graphics are also catered for and you’ll see that the photos show two full length graphics slots but all is not quite as it seems.


The chipset supplies 20 lanes of PCI Express 2.0 but it is split in the same way as Intel P35, with 16 lanes to the primary graphics slots and a mere four lanes to the secondary slot – so one of your cards is going to be severely bottlenecked. Feel free to use dual graphics cards to power four TFT displays but put all thought of CrossFire to one side as that is territory reserved for the 790X and 790FX only. 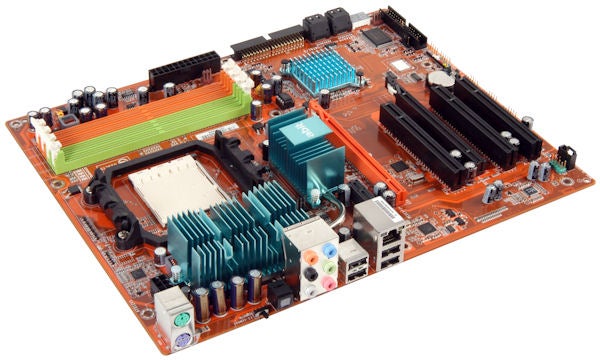 There’s no avoiding a comparison between the Intel P35 and AMD 770 chipsets. Both pieces of silicon are up for consideration if you’re building a new PC and you only want a single graphics card. The obvious difference is that P35 supports Core 2 processors while AMD 770 supports Phenom and Athlon CPUs. Now we’ve talked at length about how Intel’s Core 2 range are simply faster than the equivalents from AMD, with the Core 2 Duo E8500 being a perfect recent example, so initially it’s hard to see why you would plump for an AMD based system if neither Crossfire or SLI is an option. However, there are a few iterations that would make a board based on AMD 770 a sensible option.


For a start, there’s the simple fact that boards based on 770 are cheaper than P35. The average price of a 770 board is around £50 whereas the cheapest P35 board we found was £60 and most were well over £80. While £30 isn’t a huge amount of money, it’s not to be sniffed at. Then there’s the fact that roughly equivalent CPUs from AMD are also cheaper than those from Intel, so going with an AMD platform could save you around £50 in total. And, if you’re into gaming, that extra £50 will get you a fair chunk more graphics card, which is far more important for getting the best framerates.


Of course, this isn’t really taking into account overclocking and Intel’s chips do tend to give you more headroom if that’s your thing. Also, if you plan to go quad-core, we’d outright recommend the Intel route as the Q6600 is a superb CPU. However, if you just want a cheap dual-core system, this may be a decent choice.


So, with that sorted, let’s take a look at the board itself.

There’s a neat OTES cooling system that links the Northbridge to the cooler on the power regulation hardware, which has four phases plus an extra phase for the memory. Also, the power connectors are superbly located and the memory slots have loads of space around them – all good stuff!


We also like the position of the four SATA connectors and IDE connector, which are laid down so they don’t get in the way. Unfortunately, the floppy connector is at the foot of the board so you’ll have to trail the ribbon cable across the top of your hardware, and this inconvenient positioning is a sign of things to come. 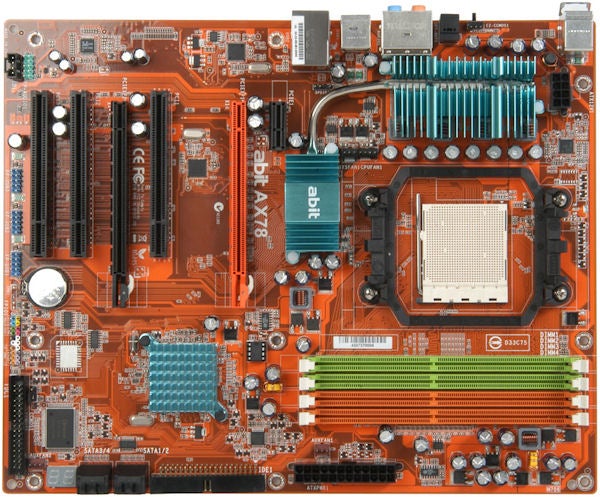 There’s an LCD POST debug display and a flick switch on the I/O panel to clear the CMOS. Abit is clearly expecting you to overclock your Phenom like billy-oh with a consequential need to diagnose and fix problems when you overstep the mark. Perhaps no-one told Abit that Phenom doesn’t overclock so the endless BIOS options to change every voltage or clock setting are irrelevant. Worse than that the memory performance of the AX78 is rather poor compared to the 790FX. This is the first AMD 770 I’ve seen so I can’t be sure whether it’s a chipset issue, a driver problem or something to lay at the door of the Abit BIOS but the memory test in PCMark05 is 20 percent slower than the 790FX. I tried two types of memory at 1,066MHz and 800MHz including the GeIL Evo One that I reviewed recently and when that didn’t work I reinstalled Windows Vista which also made no difference. Graphics performance in PCMark05 and 3DMark06 was also slower than the 790FX, to the tune of ten percent, so it’s not an isolated incident.


Then there’s the I/O panel, which is a strange sight to behold as there is a large amount of fresh air. There are two PS/2 ports, six audio mini jacks, optical output, the BIOS flick switch, four USB 2.0 ports and Gigabit LAN. You can connect more case-mounted USB ports to the three headers on the board but it’s a shame there aren’t at least two more USB ports on the I/O panel and the absence of Firewire is also an issue.

I’ve had great success with Abit motherboards in the past and use an IP35 Pro as my preferred platform for testing mainstream Intel components. It’s possible that Abit simply had a bad day with the AX78 but it seems more likely that they were somewhat stumped by the AMD 770 chipset. The list of features is rather short and the performance is unimpressive to say the least. On the upside, the price of the AX78 is very low so it’s still worth considering if you want to go dual core.

The Abit AX78 is a cheap and competent AMD motherboard and if you fancy the low cost dual-core CPU route, it is worth a punt. If you think you want quad-core, though, we’d stick with Intel.