Available on Xbox One (version tested) and PS4

Rhythm action games aren’t as plentiful as they once were. After the explosion of Guitar Hero and Rock Band in the mid-00s – and the subsequent drop off afterwards – the genre seemed empty of ideas and slowly faded away into the background. The solution, however, was reverting back to what came prior to this.

While not for everyone, games like Rez changed the industry in 2001. A rhythm action title that aimed to be more of an experience rather than an assault on your hands, it was the presentation as much as anything else that won millions over. Clearly Mad Fellows Games is aware of this and very keen to try and follow suit.

Almost feeling like its long lost cousin, Aaero sticks to this template to the utmost degree. That means it instantly sounds terrifying to learn – and to explain – but the real joy here is that when it all starts to click, the satisfaction created is wonderful. 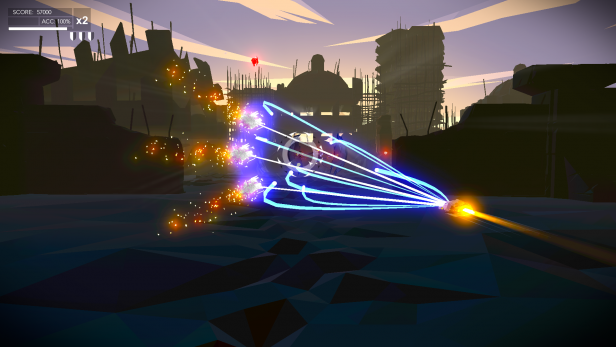 Relying on two very specific ideas, the key is understanding how to use these simultaneously. On one end you’re asked to weave your ship through a 2D environment, tapping the left stick in the appropriate direction as and when the line on screen moves. Naturally this will shift depending on the beat of the song, so finding the tune’s rhythm is imperative to make it through.

On the other is gaming’s favourite pastime which is, naturally, shooting things. Using the right stick to aim at enemies and the right trigger to shoot them, it once again ties into the music blaring in your ears. You point and fire as and when the song suggests you should. At first it does seem almost unwieldy to get these two different skills in-sync, but having some patience with it pays dividends. You’ll be increasing the challenge within hours and it turn the reward that comes with it.

This is where Aaero becomes a different beast entirely, though. Instead of just simply tapping up or down to move your craft, you have to start rotating the left stick like you’re duking it out in Street Fighter 2. It’s a very smart way to continually increase the difficulty without introducing anything too jarring, and, again, does start to become a lot easier the more time you put in. It’s very well balanced. 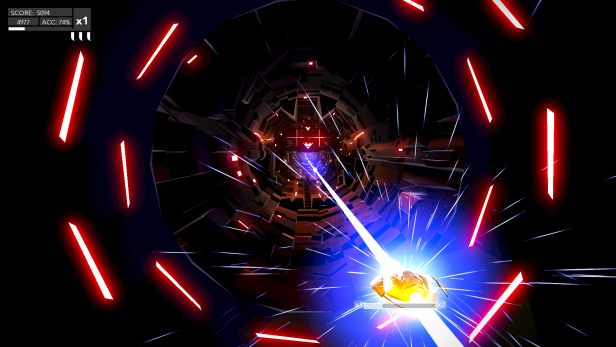 The same goes for the soundtrack, too. While the majority of songs are techno-based beats, Mad Fellows has done a good job in keeping them unique in some sense so you don’t feel like you’re being beaten over the head constantly with repetitive noise. Even if you’re not a particularly fan of the genre – and I’m certainly not – it’s still a well-rounded tracklist, and, more importantly, each one ties into the gameplay very well. Understanding that pattern and routine is easier because of the music at Aaero’s foundations. It goes beyond just a pleasant piece of music.

The final piece of the puzzle, then, are the levels. Heavily inspired by Rez, you’ll fly through some futuristic, robot-like caverns, all of which tie into the experience trying to be created here. They’re varied enough to keep things interesting, but the problem comes in how long some are. There’s nothing wrong with the odd extended section, but on occasion you’ll be asked to take flight for a good 10 minutes and, frankly, that’s just too much.

Aside from the mental aspect when you do reach higher difficulty levels, shorter, more impactful ones work far better. At times you’ll be worn out.

With that said, the way they transition as a song moves from verse to chorus is excellent. Often tying into the mood of the track effortlessly, it does make you feel as if you’re going on some kind of tripped-out journey. It’s pretty easy to put some headphones on, switch off and pretend you’ve been transported to some weird fantasy land. Where the residents all love going for a rave… 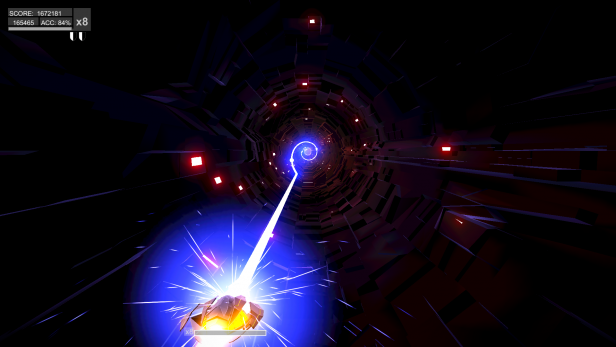 You’ll be knocked out of this state of wonderment, though, when you run into one of Aaero’s many boss fights. Designed to push you out your comfort zone and shift proceedings quite considerably, you’ve got to avoid taking a huge amount of damage while dishing out the pain yourself. They still fit within the realms of what you’ve been asked to do up to this point, but do serve as a great way to shake up the pace and knock you off your perch.

It stands to reason that anyone who got a kick out of Rez should probably put this on their wanted list, as should those who have are just taken in by its visual style. A huge appeal is the atmosphere it creates, and Aaero does that very well.

It’s not as unique or as impactful as Tetsuya Mizuguchi’s landmark entry, but it’s certainly a testament to what can be done within the genre and why it’s still relevant. That’s even more obvious given that it was made possible thanks to crowd-funding, proving there’s still a thirst for games such as this.

Aaero basically does exactly what is says on the tin – although be it with a fighting genre-esque twist – but it pulls it off with style.

Aaero wears its Rez-inspired heart on its sleeve to create a rhythm action game that both gives ua nod to the past without that we’re now well into the future, too.