If you’ve seen a CoolerMaster Stacker case, then you’ll have a rough idea of what the XBlade looks like. However, the XBlade shares more than just looks with the Stacker as many of its features are also similar. What it doesn’t have is space for two PSUs or a large watercooling kit like the Stacker, nor does it come with wheels.


But let’s start from the beginning and take a closer look at what is on offer. It is blatant that the XBlade is trying to cash in on potential Stacker buyers, but it’s only about £12 cheaper. It is slightly smaller, but it still measures 520 x 205 x 510mm (HxWxD) which is far from small compared to your average tower case. But with an increased popularity of watercooling kits the extra space means that you won’t have any problems fitting all the gear inside. 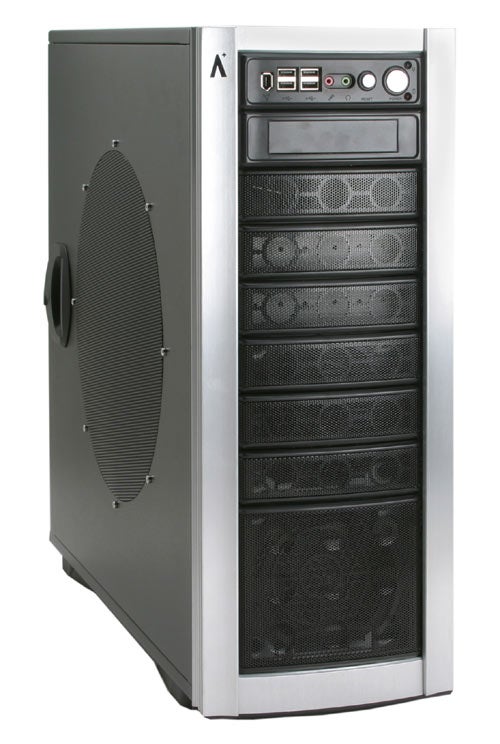 
Due to the size of the case, you can fit no less than five 5.25in drives. The bottom part of the case is taken up by a 3.5in drive bay caddy, which fits inside three further 5.25in bays. This is held in place by four screws and corresponding nuts in rubber grommets – the grommets are meant to reduce vibrations on the caddy itself. 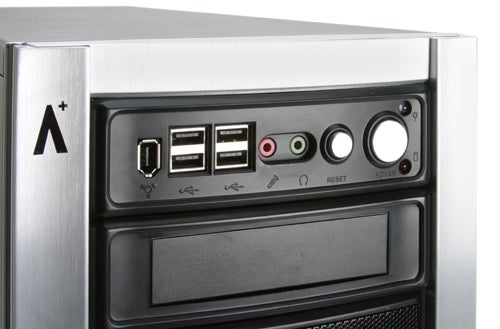 If you don’t intend to use any 3.5in drive bays this can be removed and the three 5.25in bays are freed up – but how many optical drives do you really need? The front of the 3.5in caddy can be fitted with a 120mm fan for added cooling. A clever feature here is that the fan can be easily removed without having to take out the hard drives first and it’s also protected by a washable fan filter to reduce the dust intake. The fan is fitted with four plastic pushpins and these slot through rubber grommets to reduce vibration once again. A second fan filter is fitted just above it, but this has to be removed if you want to use this space for front accessible drives.

Looking at the pictures of the case you might notice that there are a further two drive bays at the top, but these are occupied by a control panel and front mounted port insert as well as a 5.25in to 3.5in drive adapter. The latter can be removed in favour of a drive, but the power and port module need to be fitted to the system. This can be moved further down if you don’t want it at the top of the system, but I’d keep it where it is.


Besides the power and reset buttons and the power and hard drive LEDs there are also four USB 2.0 ports, a single six-pin FireWire port and headphone and microphone sockets fitted to the front module. The cables are very long and should reach even the most awkwardly positioned motherboard connectors. The audio connector supports the new HD audio connections, so it’s compatible with the latest motherboards. The USB connectors are slightly odd in the way that the ground pin is separate to the rest of connector, but this should result in better board compatibility. 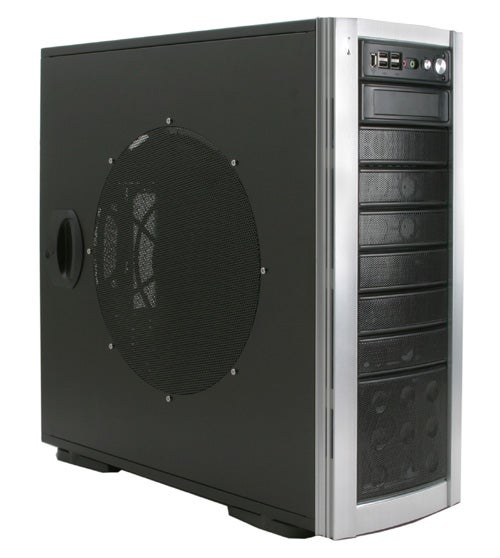 The case itself is of course constructed from steel, but several of the parts are made from plastic or aluminium. There’s actually quite a lot of plastic – possibly the reason why the XBlade is cheaper than the CoolerMaster Stacker. Possibly the worst part of this case is the drive rails, as they’re made from fairly insubstantial plastic. The rails didn’t seem to fit quite as well as they should either, but at least they’re screwless.


Fitting drives in the Xblade is a rather different experience to most cases. The aluminium profiles on each side of the case are hinged and open sideways to allow you to access the drive bays. Then you have to remove one of the mesh drive bay covers and fit the drive rails to your drive. Once this is done you have to open two latches on each side of the case – yes this means removing both of the side panels – shove the drive in place, lock the latches back in place and close the aluminium profiles back – done!

Fitting a motherboard to the XBlade is very easy since there’s plenty of room inside. There’s even an optional BTX conversion kit if the BTX standard actually becomes available to end users any day soon. It’s also easy to fit the PSU and the Xblade can even accomodate a redundant PSU by removing a small metal plate. 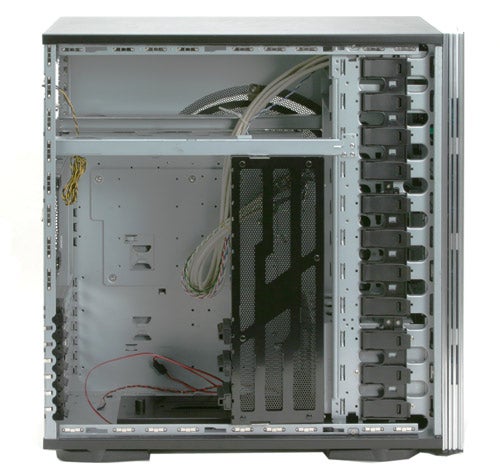 The rear of the Xblade can also house a 120mm fan and again it is mounted with the help of plastic pins that are fitted into rubber grommets. Fitting expansion cards is also relatively simple, since there are plastic latches to lock the cards in place. The only problem here is that it is sometimes hard to fit the cards in the space between the latches. If you’re using a card that needs two brackets this won’t fit, but luckily you can remove the whole card retention mechanism and use screws instead. To further help hold the cards in place a large metal swing door can be fitted in side of the case. This in turn has little plastic card retainers, but these are only really useful for very large cards.


The sides of the Xblade have massive air vents, which are fitted with dust filters. However, these don’t cover the entire size of the vents, so dust can still make its way in. For those into case modding and more importantly adding lights to their PC, the XBlade comes pre-fitted with a fair few blue LEDs. Inside each of the front sides are blue LED strip lights – these can be switched off with a power switch neatly hidden behind the right hand side aluminium profile. The bottom of the Xblade has also been fitted with a set of blue LEDs and these can be set to “move”. The speed of the lights can be adjusted via a small knob inside the case. To add extra support you can extend four feet that are fitted to the base.

The XBlade actually comes with instructions – not the best I’ve seen but far better than having nothing at all. However, they don’t explain which screws to use and as you get two sets of brass motherboard stands this caused some confusion initially. It is actually quite annoying that the different sets of brass stands use different types of screws, as this makes the whole assembly job a lot more annoying. Although, you’d only use the shorter ones in a dual CPU system, but some clearer instructions would’ve been useful. 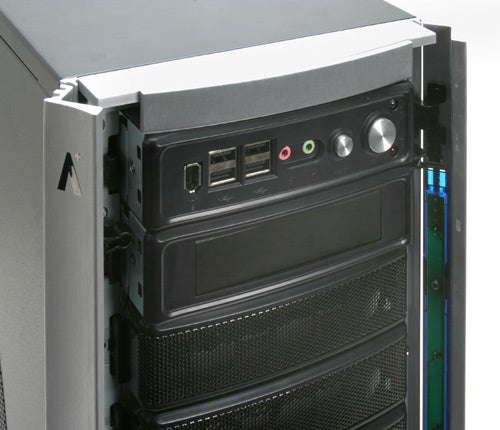 Overall the XBlade is a specialist case and as I mentioned earlier in the review aimed at anyone considering the CoolerMaster Stacker case. It differs in many ways from the Stacker, not least by being smaller. If you need the room it’s not a bad case, but I would’ve liked to have seen some better quality drive rails, less awkward ways of fitting drives and slightly better instructions. The Xblade is not cheap at £92.83 but you do get a lot of case for your money.


The A+ XBlade is a massive case with loads of room, be it for a dual CPU system or a watercooled gaming PC. It could do with a few small improvements but as long as you’re not constantly changing your PC around these shouldn’t cause any major problems.


”’Note:”’ Scan is stocking these cases under the Casetech brand instead of A+ but it is the same case.