A Way Out does some truly incredible things with co-operative game design. Taking splitscreen play and injecting it with fresh ideas, wonderful cinematic camera work and creating something that’s truly built with two players in mind, it’s incredibly intuitive. Unfortunately, an unconvincing narrative, poor voice acting and inconsistent visuals don’t quite live up to these foundations. A Way Out’s mechanical concepts will live far longer in the memory than its artistic choices.

A Way Out tells the story of Leo and Vincent, two men who meet via unfortunate circumstances in prison. They connect over a shared vendetta against the same criminal mastermind. The plot follows their Tango and Cash-style prison escape and subsequent revenge quest.

Buy A Way Out from Amazon UK | Amazon.com

Leo is the braun to Vincent’s brains. Gameplay-wise, this has little impact outside of a sprinkling of crossroad choices, where problems can be solved via Vincent’s more conservative approach or Leo’s aggressive one. Unfortunately, these traits never offer much depth to the characters, and neither does the supporting cast.

This isn’t helped by voice acting that flutters between cheesy and awful. There were so many moments of cringey dialogue, or a line so poorly delivered it removed all gravitas from the scene. 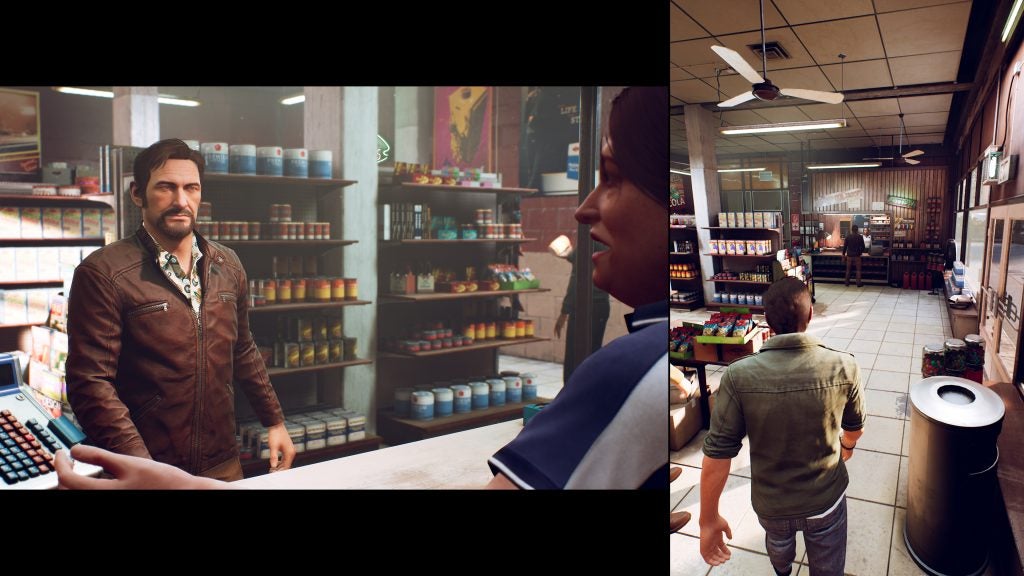 While A Way Out has a nice aesthetic overall, delivering a colour palette matching its 1970s setting, facial detail is lacking, making it hard to connect with these already vocally stunted characters. This inconsistency means the connection Hazelight so desperately wants us to feel very rarely reaches.

Combine this with a reliance on certain tropes – the pregnant wife waiting on the outside, the clichéd plot and cheesy one-liners to name but a few – and an awful soundtrack that simply doesn’t align with the events on-screen, the story just doesn’t have the weight intended.

With all that said, you’d think A Way Out is a bad game – but it isn’t. In fact, it’s very enjoyable because it’s so well designed for two players, and that shared experience is a core part of its appeal.

While other co-op titles often deliver the same experience for both parties, this is unlike anything you’ve ever played. Leo and Vincent will go off and have an entirely separate experience. They’ll complete separate objectives while also co-ordinating their efforts in a way that simply hasn’t been seen in a game before. This is in large part thanks to the wonderful cinematics. 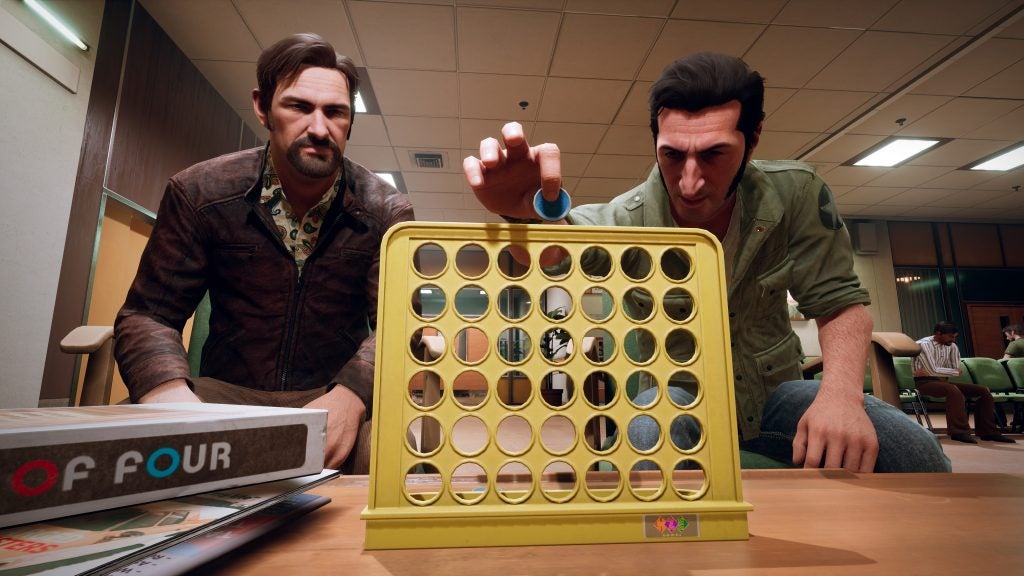 Walking around the prison yard in splitscreen, you’ll both engaged in conversations that are completely separate from each other. You’ll learn about other inmates, or just take part in menial tasks, before a fight breaks out and fate brings you two together into the same action. This leads to great QTE sequences.

There are also some superb chase sequences, where you’ll split up to catch someone or flee from the cops – it’s excellent. The way the camera keeps up with two separate players and what they do, dividing the screen before bringing it together as Leo and Vincent come together in the same room is so wonderful that there were times I simply sat back and admired the achievement.

At certain moments in the game, one character’s actions will be more important than the other, and therefore you’ll both need to pay attention to, say, Vincent. Hazelight draws attention to this by subtly moving the divide left or right, making one character’s screen bigger than the other. For example, when the guards are doing a shakedown of Vincent’s cell, Leo’s screen becomes smaller as the camera zooms in on the guards in Vincent’s room. This ensures both players pay the utmost attention to the events taking place there.

At other times, one character’s screen will fade away completely for a cut-scene focused on one character. It’s done in such a discreet manner that it’s never jarring, and this is the shining star of A Way Out. The actual design and implementation of its cooperative mechanics have never before been seen in gaming, and I hope this is something that’s replicated in games going forward. The camera-work is superb and borrows heavily from movies, but in a way that gels brilliantly with the way the game plays. 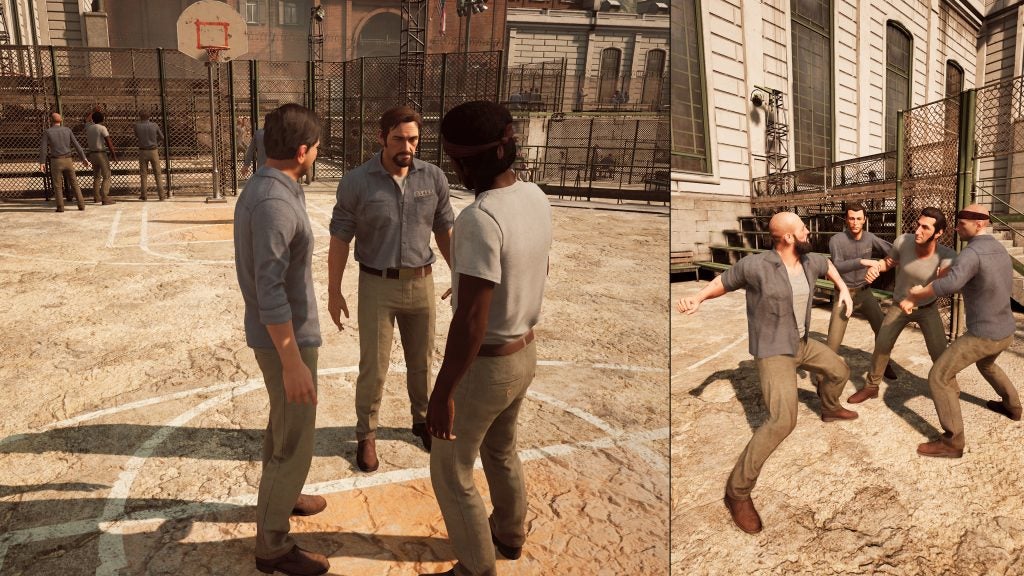 There are, however, a couple of drawbacks. When Leo and Vincent are off exploring an environment in which there are people to talk to, there’s no elegant way to decide which conversation goes first. The result is that you’ll have two chats going on at once, with one significantly louder than the other. You’ll simply have to read the subtitles of whichever side you’re playing and try to block out the garbled noise during those moments.

There’s also a minor quibble over exploration and puzzle sequences. At times, Vincent and Leo will need to overcome a problem to move onto the next sequence – stealing a wrench from the workshop and getting it back to their cell, for example. The trouble is, there’s no real creative problem-solving in order to complete these tasks. There was no pressing need to communicate between players in order to know what to do; it was obvious and linear, with only one solution for every problem. It became very much a case of ‘monkey see, monkey do’.

Then once you come to understand the solution to the problem, often within a few seconds, sequences lasted far too long and start to become tiresome. Breaking out of the cell, for instance, requires one player being lookout for guards while the other works away in their cell. The sequence involves a series of controller mini-games, and each one lasts just that bit too long and becomes tedious, especially when both Leo and Vincent need to complete the same task in order to escape.

Convenience, too, will be an issue for some players. While A Way Out does brilliant things with co-op, and Hazelight is generous enough to let two people experience the game with only one player having bought it, you have to keep in mind that if you invite a pal using the Friend Pass, they must first download the free trial of the game. So if you’re planning to play through the game with someone, you’ll have to book in some time to get downloading first.

Then there’s the fact that this game can only be played in player-and-player co-op. There’s no AI companion should you want to tackle it solo. Finding free time for both you and another person to sit down and spend several hours with the game – in my experience as a father to a young son and friends with jobs and lives to live – proved very tricky.

Also, I found it best to enjoy the entire experience with the same player. My initial plan was to play with different players throughout to get their thoughts, but after starting with a friend at work, I realised I wanted us to see the whole thing through together. The connection not only lays between Leo and Vincent’s journey, but also the journey of the two players enjoying and watching A Way Out together. 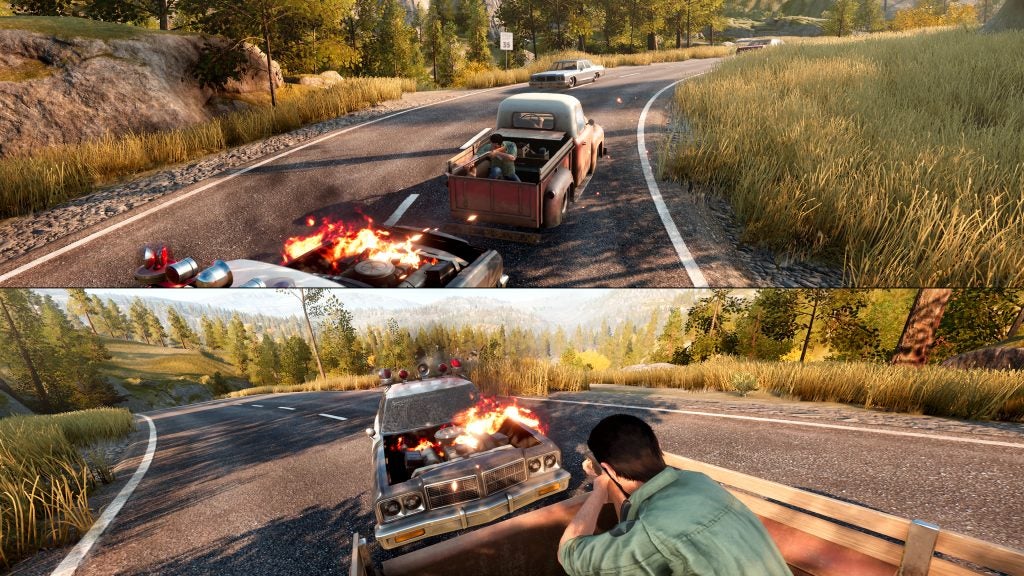 Co-ordinating their escape, gasping at a shock moment, laughing at the cringey dialogue – this built a rapport that, should I begin playing the game with someone new, will be lost. This all serves to reinforce how well crafted A Way Out’s co-op is. While in other multiplayer experiences I can easily jump between matches with strangers, this very much felt like a game through which you’d sit down with a friend and enjoy together.

A Way Out has some fantastic ideas that deliver a very unique co-op experience. It’s certainly worthy of your time, should you and a friend have it spare to commit to the game’s eight or so hours.

Mechanically, this is a very rewarding experience that deserves plenty of praise. There are some minor quibbles about some of its mechanics, but these stand in the shade of its achievements.

Buy A Way Out from Amazon UK | Amazon.com

Sadly, the same can’t be said for its narrative, which is poor and accompanied by sterile voice-acting of one-dimensional characters. It’s the most fun B-movie you’ll play this year.