It’d be fair to say that platformers aren’t as plentiful as they used to be. Masterpieces such as Super Mario Odyssey and flawed love letters like Yooka-Laylee keep the genre alive and kicking, but we’re no longer spoilt for choice when it comes to colourful collectathons. A Hat in Time is a wonderful callback to the golden era of platforming, so utterly dripping with playful charm and mechanical creativity that it’s hard not to fall in love with its happy-go-lucky heroine’s adventure.

Hat Girl is a space-faring explorer who finds her supply of timepieces stolen by the Mafia upon her journey home. Obviously, this leads her on a galactic adventure across several planets in search of her missing belongings. This leads to a brilliant sequence of levels that all stand out in their own way, never relying on the same mechanics when it comes to challenging the player with fun, inventive paths to each new timepiece.

Stages come in the form of different planets, floating across the universe, waiting to be unlocked with timepieces. Hat Girl calls a sprawling spaceship her home, filled with cuddly toys, pillows, and even a Roomba. Jumping on the latter unlocks a trophy, highlighting one of the many excellent touches A Hat in Time hides across its charming world. The hub area is filled with nifty secrets, many of which are discovered naturally once you unlock new hats. 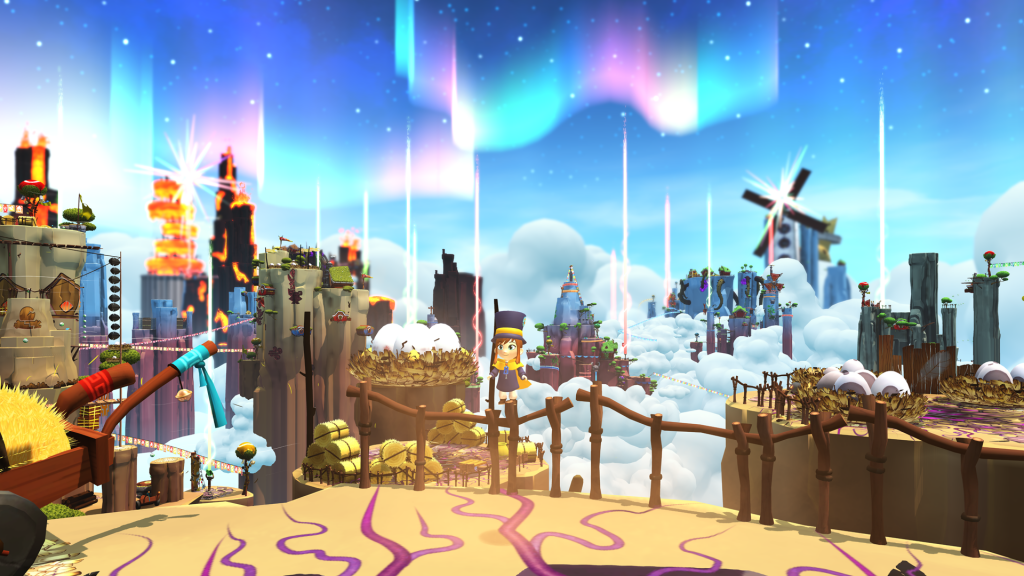 Snazzy headwear can be crafted by collecting yarn across every stage. They’re ripe for exploration and filled with collectibles that are hugely rewarding to snap up. You’ll only craft a small range of hats throughout A Hat in Time, but the way they’re used is so inventive that the number hardly matters. Whether it’s a hat that gives you the ability to sprint or see into the nether realm, platforming and puzzles are engineered to make you think both fast and outside the box.

One particular tool turns Hat Girl into a humanoid icicle before launching her across the environment. This re-contextualised entire sections of the game that I immediately wanted to revisit in search of extra goodies. Platforms that once seemed impossible to reach now required just a creative bit of intuitive thinking to overcome. A Hat in Time never overwhelms yet provides enough inspired variety to keep the experience a frequent delight.

Additional powers such as a laser beam and drivable motorcycle can be obtained by equipping badges. Purchased from a mythical merchant located across each level, building my collection became just as addictive as beating missions and obtaining timepieces. A Hat in Time takes the best parts of platforming and injects them with an irresistible visual charm and a great sense of humour. It’s a shame that the experience doesn’t fare tremendously well on consoles. Performance is inconsistent, making trickier sections hard to nail and frustrating as a result. If you’re after a smooth experience, the PC version is the way forward, but this inconsistency is far from a dealbreaker. The camera is also an unpredictable bugger, making it hard to choreograph my actions and sending me to oblivion on a few occasions. Luckily, A Hat in Time is fast and forgiving when it comes to second attempts.

Hat Girl is a fantastic lead, largely because of how instilled with personality she is, despite only speaking a few words throughout the entire game. She’s cheeky, fashionable and, as developer Gears for Breakfast are happy to let you know, she’s cute as heck. She isn’t the only shining star in the character department either – A Hat in Time is filled with memorable faces that I was sad to leave behind after each stage.

Some of the highlights include a duo of rival film directors who thrust Hat Girl into their new productions. I found myself solving a murder mystery aboard a moving train and leading a fabulous parade before attending a truly deadly award ceremony. It’s an unpredictable blast made even better thanks to impressive performances from the entire cast. It also seems self-aware of the genre’s history while simultaneously proving its mettle as one of the year’s finest platformers.

These wacky villains lead to some tremendous boss encounters that put Hat Girl’s reflexes to the test. They’re genuinely difficult and abandon the conventions you’d expect from this kind of platformer. Enemies will throw out a series of attacks before breaking the fourth wall and sitting the player down for a chat. It’s brilliant, using A Hat in Time’s cavalcade of playful qualities to its advantage. I won’t spoil anything here, but I’d be surprised if you didn’t put the controller down with a grin on your face. 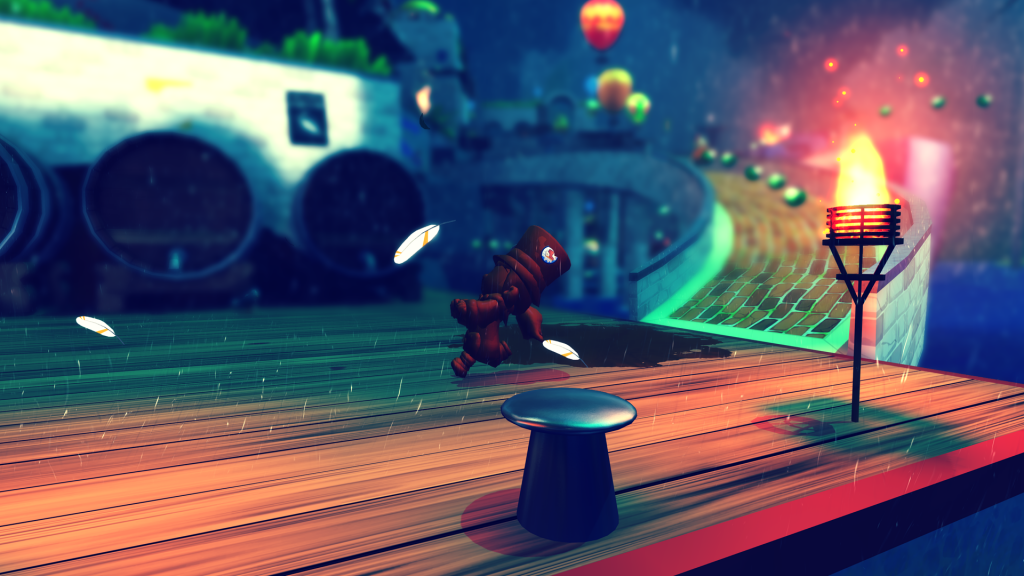 A Hat in Time is more than a lovingly crafted homage to the world of platformers; it’s a delightful adventure in its own right that brings creative innovation to the genre in an abundance of wonderful ways.

Hat Girl’s outlandish escapades never fail to put a smile on my face, thanks to a series of worlds that manage to surprise at every turn. If you’re a fan of the genre, this is definitely worth checking out.