Available on PS4 (reviewed), Xbox One, PC, Xbox 360, PS3, iOS
Curb your enthusiasm and dare not to be disappointed: this first episode of Telltale’s Game of Thrones adaptation is very much an opening chapter. It sets up characters and situations, starts forming themes and building atmosphere. There’s a lot that goes on here that will probably pay off in the months to come. This is Telltale working on a larger scale, on what might turn out to be its most ambitious project yet. 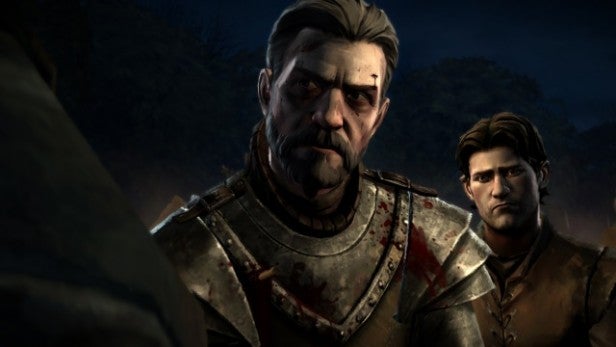 As with its adaptation of The Walking Dead, Telltale has chosen to skirt away from retelling familiar storylines, to unfold a new narrative that works within the world and structure of George R.R. Martin’s novels and the blockbuster TV series. Yet, instead of taking one character and following their journey through Game of Thrones, it opts to follow Martin’s lead in following five different protagonists, of which this episode introduces three.

Gared is the squire of the Northern lord, Lord Forrester, caught up in the wake of the infamous red wedding and charged with a secret mission. Mira is the eldest daughter of the aforementioned lord, and ensnared by Lannister machinations in the grand halls and chambers of King’s Landing. Ethan Forrester is the third-born Forrester son and Mira’s brother, suddenly forced to accept the duties of a high position and prove he can lead.

It’s a brave move, but it pays off, echoing Martin’s complex depiction of how family, ethical and political concerns meet, mesh and often conflict in the midst of historical upheaval. Gared’s sections see you making difficult decisions for the sake of both honour and survival. Mira’s sections are all about diplomacy, and about how far you can go to compromise your values for the sake of kith and kin. Ethan’s sections are possibly the hardest, asking you to consider both how a leader need to act, and what kind of leader you want him to be. 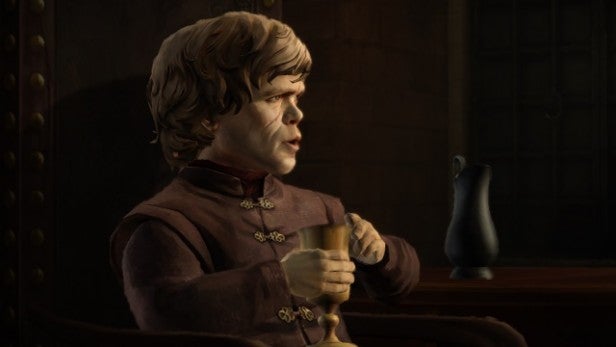 It’s a bit slow going to start with, and – in Gared’s case – a little over-reliant on cheap quick-time-event action sequences. These do a fine job of building tension and putting you in the character’s shoes, but if you’ve played your way through two seasons of The Walking Dead and one of The Wolf Among Us, you might be wondering how many times a person can be asked to sweep a stick one way, move a reticule over a certain point, tap a trigger then hammer the X button. Surely there must be another way to handle action sequences in this kind of game?

Otherwise, it’s more about dialogue than solving puzzles, but there’s something fitting about that in a world where what you say and to whom matters more than combining object A with situation B to solve conundrum C. Here the wrong response can be as bad as failing to hit that quick-time event target, with the conversation timer pushing you to commit, but the knowledge that your answer won’t please everyone making the choice difficult. Iron from Ice works because it feels like A Game of Thrones, and in a way it’s oddly disengaged mode of gameplay helps that happen. Just be aware that if you’re looking for challenging puzzles or anything more than a piece of interactive fiction, you’re not really going to find it here. 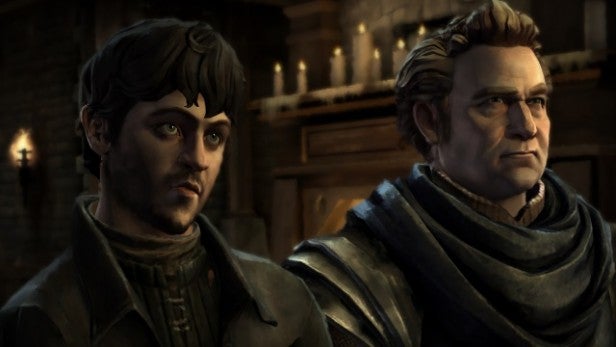 It’s not a particularly good-looking game. A lot of thought has gone into the scenery and the characters, but an engine that works well for comic-book adaptations struggles with a world we’ve already seen on our TV screens, particularly when well-known characters like Tyrion, Margaery Tyrell, Ramsay Snow or Cersei join the cast. The animation is closer to Thunderbirds puppet than motion-captured actor, even if the voicework – the odd wandering accent aside – measures up.

Yet despite this, it has a compelling atmosphere. The music is great, the script is convincing and the use of lighting and camera angles demonstrates the experience Telltale has built up in the last few years. While it would have been great to see this game running in another engine with, say, the visuals of Dragon Age: Inquisition or The Witcher III, it’s hard to imagine another studio handling the job this well. 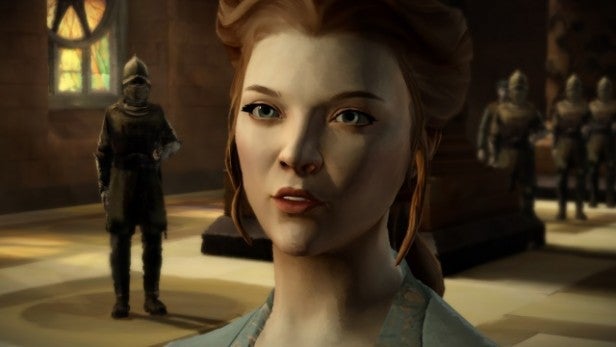 It is just a start, though, and the downside of the multiple protagonists approach is that you don’t quite get enough time with any one character, or much of a chance to get in deep with their particular strand of the story. There are some great moments here – instances of dread, tension, anger and confusion – but only a few, while a few sequences seem oddly pedestrian, without the tight pacing of the TV show. It’s good enough to convince you to carry on with the next chapter, and Telltale has done a fine job of capturing the feel of Game of Thrones, but the challenge will be building something great on these foundations, and making the ambitious structure hold.

Verdict
Telltale’s video game version of Game of Thrones gets off to a good start, though it’s more dialogue-focused than ever and the reliance on quick-time-events is beginning to wear thin. If you’re a fan of the books and TV series then you’ll be happy with Telltale’s faithful approach to the fiction, and this first episode sets up some interesting situations for future chapters to exploit. It’s far too early for a definitive verdict, but we like what we see and we’re keen to see more.

Next, read our pick of the best Christmas gift ideas for gamers