Dutch company A.C. Ryan has certainly been prolific in its attempts to create the perfect media player. Pre-2009, models like the Network DVR lacked high definition capabilities, however the Playon!HD we reviewed last year offered not only HD but more features than any other media player we had looked at. Unfortunately, the Playon!HD was also large, heavy and not exactly silent – all of which prevented it from taking the media player crown. Now A.C. Ryan is back with the Playon!HD Mini, the “little brother of thePlayon!HD”.

A.C. Ryan’s latest certainly holds a lot of promise. It supposedly offers the same features as the Playon!HD in a smaller (151 x 102 x 42mm compared to its predecessor’s 227 x 166 x 60mm), lighter (600g versus 1.5kg), quieter and cheaper package! What’s not to like? Well first off the bundle isn’t quite as extravagant as its predecessors, consisting of a more modest HDMI cable, composite video and stereo audio cable, power brick and remote. 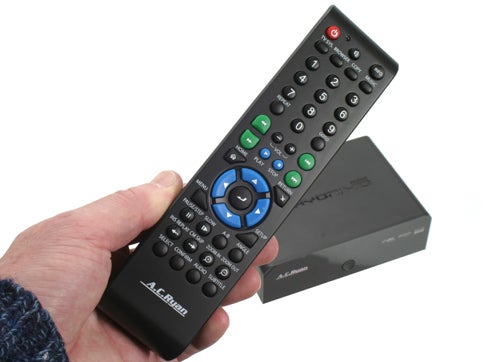 The remote is still the same model as found with the Playon!HD, which if you read our review you’ll know we weren’t overly enthusiastic about. It has its plus points: it’s large and comfortable; uses AA batteries that could be exchanged for rechargeables, and has colour-coded rubberised buttons that offer pleasant feedback. Unfortunately a few layout quirks make it less than intuitive. For example, the tiny play, stop and volume buttons are clustered together between large track control buttons, making it too easy to accidentally stop your video when you only meant to turn up the volume.


Onto the device itself, as one might expect this is essentially a smaller version of the Playon!HD. And that’s no bad thing, as aside from its size the original was a pretty attractive box. In fact, with the few design tweaks A.C. Ryan has implemented we would go so far as to say that the Playon!HD Mini is probably the most attractive media player we’ve reviewed, if not as cute as the tiny Western Digital WDTV Live HD.

A.C. Ryan has sensibly refrained from the completely glossy shells so many others use. The Mini has matte, textured sides and the only glossy section is the front, with its Playon!HD logo illuminated in red when in standby or blue when the device is active. Below this is a flush power button, which is the only control present so you’ll always need the remote to hand to operate the Playon!HD Mini. One small downside is that the unit has hard plastic feet rather than the usual rubber ones, so you’ll need to be careful if putting it on surfaces that scratch easily.

Impressively, at the Mini’s back you’ll find almost the same connectivity found on the rear panel of the full-size Playon!HD, though it lacks that model’s co-axial digital audio output and side-mounted memory card reader. Nonetheless, with HDMI 1.3, proper component and composite video outputs, twin USB inputs supporting up to 2TB hard drives and Ethernet (Wireless-N Wi-Fi is available with an optional dongle priced at around £20) as well as analogue stereo and digital optical audio out, the basics are well-covered. Only the Asus O!Play HDP-R1 HD, which provides not only USB but also eSATA connections for hooking up external storage, offers more at this size.

Startup is quick with the Playon!HD Mini booting up in less than 15 seconds. You’re then greeted by the same attractive, if slightly slow, interface as its predecessor – at least once you’ve set the resolution to HD from the ugly standard definition default. A.C. Ryan has addressed our biggest complaint with the Playon!HD’s media handling: it now supports indexing on anything you plug in. It must be said that the process is not as smooth as with the WDTV Live HD or more recent Eminent EM7075-DTS hdMedia Stream, but at least it’s present.

The menu is divided into Browser, Media Library, Feeds, Radio, File Copy and Setup. The first option lets you browse your media by location or type, while Media Library indexes your files by type, date, genre or artist to name but a few. Feeds includes internet functionality such as Picasa, News Feeds and Flickr. Though these didn’t work flawlessly (displaying some screen artefacts and once a black screen), A.C. Ryan has a good history with providing frequent and fast firmware updates, so hopefully any minor issues will be fixed soon. 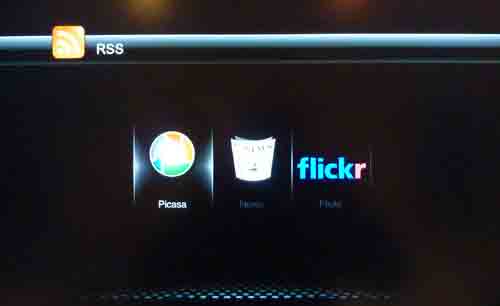 Speaking of firmware updates, the latest one lets the Mini play back media from external optical discs just like its bigger brother. Though this only works on unprotected discs (i.e. most store-bought DVDs won’t work) and has limited appeal to begin with, it’s yet another unique feature offered by A.C. Ryan’s media players – as is File Copy, which lets you transfer files across connected local or remote storage. Radio, as the name suggests, lets you listen to Internet Radio stations. YouTube support has not been confirmed but we would reckon it fairly likely considering it’s something the Mini’s bigger brother already offers.

Other highly welcome features of the Playon!HD Mini include UPnP Media Server and NAS functionality. Though it’s not yet implemented as on the larger A.C. Ryan player and Eminent’s EM7075, btpd BitTorrent downloading is also promised in a future firmware update. But the goodness doesn’t end here, as the Playon!HD Mini also supports more file formats than most other players in its price class – including RMVB video playback, a feature that only the Asus O!Play and expensive Popcorn Hour 110 share. 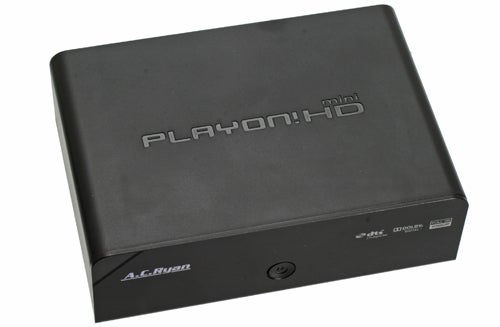 The Playon!HD Mini supports JPEG HD, BMP, GIF, TIFF and PNG picture formats, while audio support covers MP2/3, OGG, WMA, WAV, AAC, COOK and FLAC, Dolby Digital or DTS passthrough and stereo down-mixing – even DTS-HD is supported, which is yet another rarity. Video support includes HD MPEG 2/4, H.264, WMV9/VC-1 and RM/RMVB (up to 720p) codecs in AVI, ASF, DAT, FLV, MKV, M2TS, MP4, MOV, M4V, RM, TS, TP, TRP, VOB/ISO/IFO, WMV, and xVid/DivX containers with SRT, SMI, SSA, IDX and SUB subtitles and full menu video previews. There’s even support for 1080p 24. That’s pretty much as comprehensive as anyone could want, and we can’t think of a single important format or file system that’s left out. As with its larger brother, playback of all these various formats was very reliable.


Aside from slightly slow menu operation and a few minor glitches with some of its internet features, the Playon!HD Mini is a pleasure to use. Thanks to its passive cooling it is silent in operation without getting more than warm to the touch, which is impressive considering the Realtek chip that powers it is known for getting rather hot. Best of all, with an MSRP of £87, the Mini is A.C. Ryan’s most affordable media player yet and offers truly excellent value compared to the competition. After all, this is already less than the retail price of other media players offering similar features. A.C. Ryan also backs it with a better-than-average two-year warranty, though in this regard Eminent’s five year one takes the biscuit. 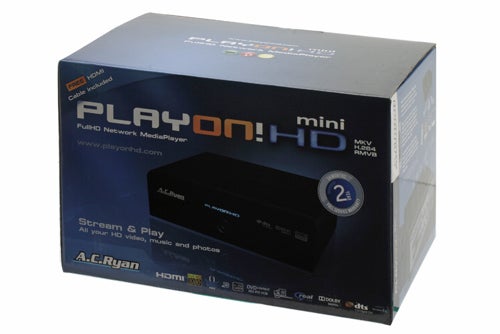 
Successfully addressing most of the reservations we expressed about A.C. Ryan’s original Playon!HD, the company’s new Playon!HD Mini is the best and most versatile media player we’ve yet seen for its bargain price. If you’re willing to forgive an interface that isn’t quite as smooth as the best of the competition and a slightly awkward remote, this is definitely the media player to go for as its format and feature support are simply unrivalled.