We’ve looked at a few products from Dutch company A.C.Ryan. Back in 2008 there was the ACR-PV72100 Playon! Network DVR, which was a well-featured if not spectacular HDD recorder for its time. However, by May 2009’s Playon! DVR TV, straight media player devices like the Western Digital WDTV HD Media Player had moved the goalposts away from recorders, and with its lack of format support the Playon! DVR TV simply couldn’t keep up.


Now A.C.Ryan is looking to fix that with the new Playon!HD media player, and if the specifications are anything to go by it’s onto an absolute winner. It supports every video format in popular use, including not just MOV and MKV but also such rarities as ASF, FLV and RMVB, all at up to 1,080p over both HDMI and component – and for home cinema buffs there’s even 1,080p 24 support. It caters to both Dolby and DTS audio (pass-through or down-mixed to stereo), features extensive audio codec and subtitle support, and offers both wired and wireless-n networking with NAS functionality, YouTube and BitTorrent. Uniquely, it can even read media from external CD/DVD drives! 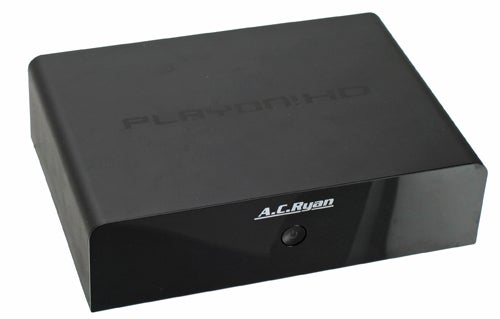 So far, that pretty much makes it the most capable sub £150 media player we’ve reviewed, beating even the Popcorn Hour A110 and new WDTV Live HD. Best of all, it’s quite affordable, with prices starting at £130. However – as the unfortunate ViewSonic VMP30 Digital Media Player proved – you can’t always go by what the spec-sheet claims, so it’s a good thing we’re here to let you know if it’s worth your hard-earned cash.


The Playon!HD comes with a very generous bundle. A highlight is the two-metre HiFX Evolution HDMI cable, which costs around £40 on its own. There are also component and composite video cables, and a USB A-B cable to hook the Playon!HD up to a computer. A compact, glossy black wireless USB dongle supporting speeds of up to 802.11n is available direct from A.C.Ryan and should soon be sold in UK shops for between £20-25. 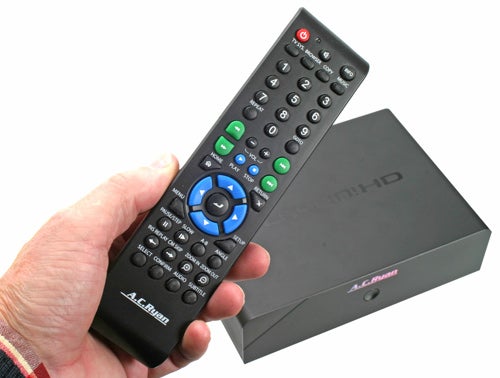 Last though not least is the remote control, which together with the main unit has received a complete overhaul. It’s still large, with a solid black plastic body that lies comfortably in the hand, but its buttons are completely different. However, though it fixes some quirks with the old layout, it adds a few new ones of its own.


For example, the tiny play, stop and volume buttons are now nestled between large green track control buttons, making them hard to get at as well as increasing the chances of stopping your video when you only meant to turn up the volume. 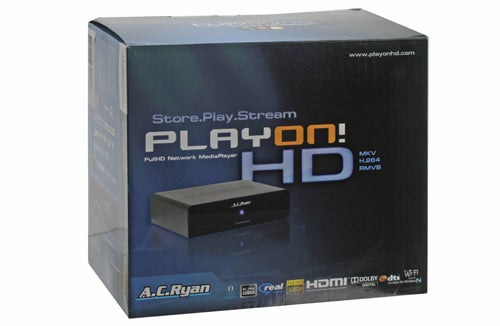 Factor in other annoyances such as the ‘pause’ button being too far from the ‘play’ one, and we’d say the old remote definitely comes out the winner by comparison, even though this version’s soft but sturdy buttons offer good feedback. The remote still uses AA batteries so you can swap the provided set with some rechargeable ones when they die.

Our first reaction to the Playon!HD was one of surprise – though not in a good way. At 227 x 165 x 60mm and weighing a considerable 1.5kg, this is the largest media player we’ve come across, a far cry from A.C.Ryan’s relatively svelte previous Playon! DVR boxes. It’s also a shame that the brushed metal finish of its predecessors has made way for matt plastic.


Despite the Playon!HD’s bulkiness, it’s by far the cleanest-looking model we’ve seen from A.C.Ryan, as the usual buttons and indicators are all absent here. There’s only a single blue-backlit power button (red when in standby), with “Playon!HD” illuminated in blue below it. The disadvantage to this minimalist design is that the box can no longer be operated without the remote, which will lead to much frustration if you’re the type who mislays remotes on a regular basis.

Most of the Playon!HD’s generous connectivity resides at its rear. This includes composite, component and HDMI ports for video; stereo analogue outputs and optical plus co-axial digital audio outputs; an Ethernet port, and the power input.


On the right side are two Type-A downstream USB ports for connecting storage drives and/or the optional wireless dongle. However, as these ports are mounted close together, if you use the wireless dongle you’ll have trouble inserting any but the slimmest USB memory sticks, though this is easily remedied by using a USB extension cable. A Type-B upstream USB port for hooking up your PC and managing content stored on the Playon!HD is also located on the right side, along with a card reader compatible with SD/HC, MMC, and MS/Pro formats.

On the Playon!HD’s base is an access panel covering the bay for a 3.5in SATA hard drive. After undoing two screws it’s easily removed, and the panel itself is the mounting mechanism for the hard drive, which requires a further four screws to attach. You can get the Playon!HD either as a bare-bones unit as priced in this review or with a SATA HDD drive of up to 1TB pre-installed from the Playon!HD mini site for a total of 267.50 Euros. (the Playon!HD supports HDDs to a maximum capacity of 1.5TB). If you want internal storage, we’d of course recommend buying a hard drive separately to save money.


Opening the device up also lets you see how much space is wasted inside, where you could easily fit two 3.5in drives with room to spare. We can only surmise that A.C.Ryan has made the unit so large for better cooling, even though there’s a rather noisy fan at the back.

In use, the Playon!HD boots up very quickly into a main menu that looks better than the rather ugly interfaces of the previous generation devices. However, it still sports the same slightly dated menu structure underneath, so it’s not the smoothest experience.


Though library cataloguing is now present, unfortunately – as with the Emtec Movie Cube S800 – it’s only for the internal drive. So the only way to access your media from external storage is still through selecting the desired device, then browsing by the categories we’ve all come to know and hate: All, Music, Photos or Movies. Some slightly slow responses here make this all the more tiresome, but to be fair it’s a failing common to most media players on the market. 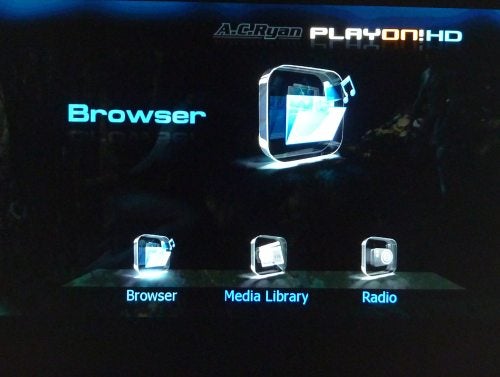 Speaking of external storage, as already mentioned the Playon!HD is the only media player in its price class that allows you to plug in an external USB optical drive, after which it will happily read any multimedia content off the disc. This is an incredibly handy feature that will be welcome for many – the only fly in the ointment is that it can’t play regular movie DVDs because of their CSS protection. However, a region-free music DVD we tried played just fine, and of course ripped DVDs, backups and those pictures or home movies you have on optical discs will work just as well.


The Playon! HD’s network features (including Internet Radio, a Web Server, Picasa, RSS news feeds, BitTorrent and Samba NAS) worked perfectly through wired or wireless connections. The exception was YouTube videos – a newly-added feature in beta firmware, so it’s to be expected this niggle will be fixed by the time the firmware becomes an official release. Other features are also in the pipeline, indicating that A.C.Ryan is committed to getting as much out of its box of tricks as it possibly can. 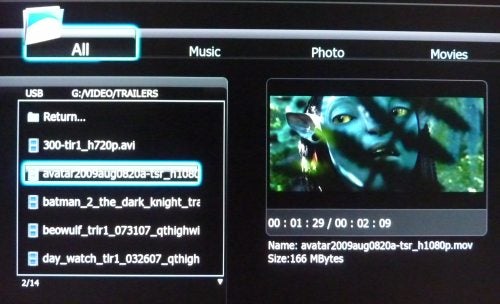 To be honest we can’t think of a single important format or codec that isn’t supported, and indeed the Playon!HD effortlessly handled everything we threw at it, no matter how obscure, or how high or low the quality. Indeed, this is the first media player that played back every single test file in our arsenal without any problems, though Asus’ excellent O!Play HDP-R1 HD came awfully close.

This leaves us in a bit of a conundrum. Its unwieldy size, relatively high noise level, slightly awkward (if very well-featured) remote, dated menu system and lack of non-local indexing leave the Playon!HD in a slightly weak position against the cheaper Asus O!Play HDP-R1 HD and indeed Western Digital’s WDTV Live HD, both of which offer most of the main features you’d want, in quiet and compact packages. However, the Playon!HD is definitely one of A.C.Ryan’s best products yet and its feature-set and file support is pretty much unrivalled by anything currently on the market at this price point. 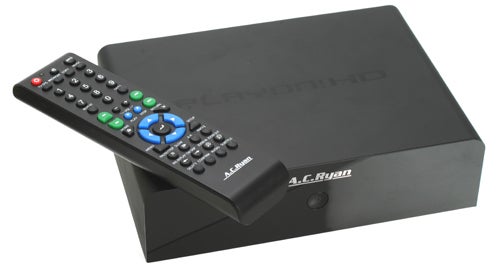 
Unfortunately the best-featured media player to pass through our office is also the biggest and noisiest, with a few interface annoyances to boot. Nonetheless, if you want what A.C.Ryan’s Playon!HD has to offer, the bare-bone asking price of £130 seems reasonable.