Not many games feature a hug button. Perhaps a few more games should. A Boy and his Blob is one that does, and one that makes you want to use it. An amiable platform adventure that first appeared on the Wii in 2009, it’s itself a ‘re-imagining’ of a 1989 NES game, but now finds itself rebuilt for today’s platforms, including Xbox One and PS4.

It’s the tale of (you guessed it) a boy and an alien refugee; a cute white blob that has escaped an evil empire only to crash-land on earth. The two join forces to defeat the Blob’s pursuers, first tackling them on Earth before taking the fight back to the Blob’s home planet. Plot-wise, that’s all there is to know. 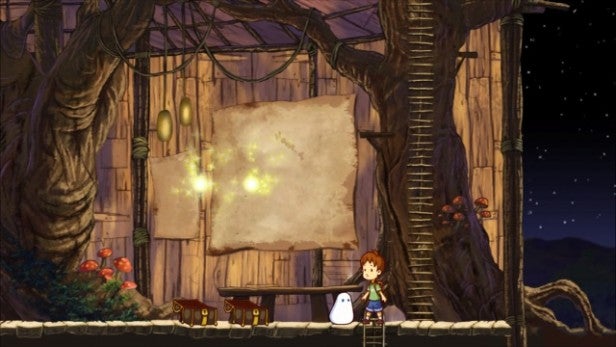 The blob makes a cute companion, tagging after the boy and easily summoned with shouts and a high-pitched whistle if it goes astray. However, it soon becomes apparent that this particular gelatinous mass has other powers. Throw a coloured jelly-bean down and it transforms into a hole in the ground, a trampoline or ladder, later a bowling ball, a space hopper, an anvil – even a jack or zorb. Using these transformations our dynamic duo can defeat the emperor’s minions and tackle any obstacle lying in their way.

In short, we’re deep in puzzle-platformer territory. The boy has limited leaping powers and can’t survive falls, spikes, close contact with the enemy or water. Large gaps, high rock walls and patrolling monsters give you a constant stream of impediments. Yet for every problem there’s a blob-related solution, using or combining forms to destroy your foes, move through impermeable barriers or reach new heights. The game’s gentle and smart in the way it lays these out, too, introducing new forms and literally signposting solutions, waiting until you’ve mastered the basics, then leaving you to get on with it. 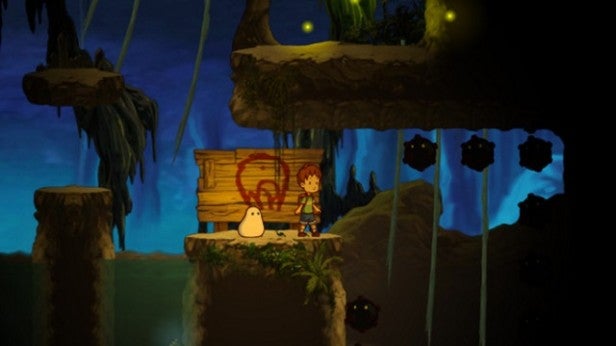 In fact this isn’t a particularly challenging game. Only a few sections demand fast reflexes or ninja platforming skills. Lives are infinite and checkpoints so regular that you rarely have to repeat more than a few minutes of play, despite the fact that so many traps and monsters are instantly fatal. What difficulty there is lies solely in the puzzles, which ramp up nicely in terms of complexity as the game goes on, and in finding and then executing the solutions. Here the infinite lives and generous checkpoints encourage experimentation, and there’s a real satisfaction in working out what you need to do then pulling it off.

Boss battles at the end of each of the four chapters give you the toughest challenge, but even these are logical if you pay attention. Take a close look at your current repertoire of transformations, watch the scenery for opportunities and pay mind to the boss’s movement and attack patterns – you won’t go too far wrong. Long term interest, meanwhile, is provided by a series of collectible chests. Finding and grabbing these (the blob swallows them) will take the kind of exploration and more advanced puzzle solving that will keep you coming back to replay completed levels. 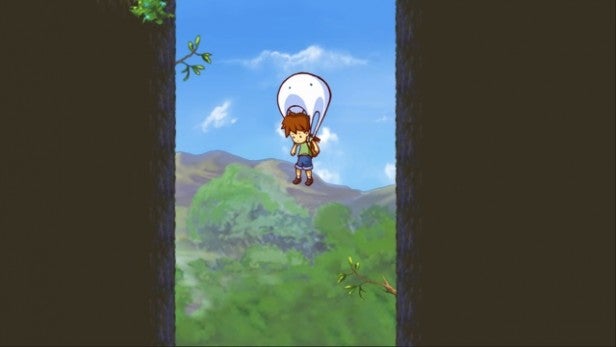 The controls are simple, the game handling interactions with a minimal set of smart, context-sensitive buttons, while the different forms can be selected by picking a jelly bean from an ability wheel, accessed with a press of the X button. The in-game tutorials could be a little clearer on how some of the forms work, not to mention tell you that beans can be thrown as well as dropped, but once you work out the odd wrinkle a whole world of possible moves opens up. A Boy and his Blob is a classic example of a game that’s easy to pick up and play, but has hidden complexities to hold your interest.

In fact, each new level seems to bring some new delight, whether it’s speeding up ramps and through half-pipes in the zorb, firing on a cannon or leaping on a rocket. The scenery could do with a little more spectacle and variety, but with so many forms to flip between the action never grows stale. 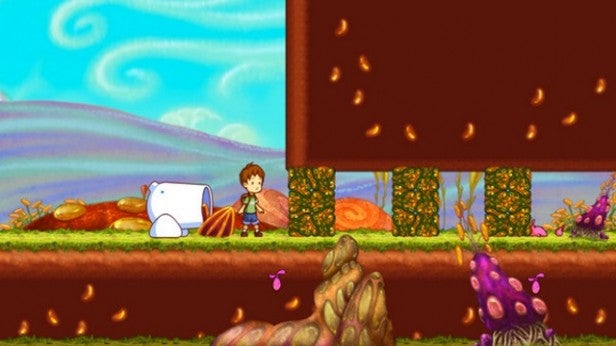 The worst thing you can say about this HD remaster is that it’s not as thorough an update as you might have hoped. When A Boy and His Blob appeared its hand-painted 2D graphics looked quite lovely, but the likes of Rayman Legends and Ori and the Blind Forest now make it seem a little basic, even with more detailed backgrounds and some nice little animated details.

What’s more, while some visual elements have been updated to look good at 1080p full HD resolutions, many more seem to have just been scaled-up and smoothed over. As a result, playing A Boy and his Blob can be a bit like watching a Blu-ray of an old, made for TV eighties cartoon show. There’s personality and colour in the art and some great animation, but the graphics lack the sharp-edged clarity, light and texture of the Rayman and Ori games.

That’s a shame, but not a disaster. Even in a world where cute puzzle-platformers are much more common and – with stronger real-time physics engines – more sophisticated, A Boy and His Blob is unusually enjoyable. Maybe it’s the warmth, maybe the open-armed generosity of the game design, but there’s something genuinely huggable about it. While not quite an immortal classic, it’s good to see it back.

Verdict
This particular remaster doesn’t quite do enough to boost the graphics, but the game underneath has lost nothing of its charm or heart. The simple controls and gentle difficulty curve make it very welcoming, but there’s enough complexity and optional challenge to keep you interested long-term. This is a thoroughly rewarding remake – and one that leaves us hoping for a brand new game.