Adding the “Pro” prefix to any device implies a serious performance boost. Although Apple has been known to use the “Pro” term lightly in the past, the new iPad Pro 9.7-inch benefits from significant enhancements over the already nippy iPad Air 2.

Inside the tablet is Apple’s high-end A9X SoC, which includes the M9 co-processor to enable the always-on Siri mode. There’s also a 12-core PowerVR graphics chip and 2GB of RAM.

I’m sure some of you sighed deeply at that last point: why does this iPad Pro have only half the RAM of the other equally “Pro” iPad? I don’t have an answer, but my advice would be not to dwell on it.

iOS management of RAM is the best out there, and aside from apps staying loaded up for a shorter time, the smaller amount of RAM doesn’t actually make much difference. It might do in the future, sure, but not for now. 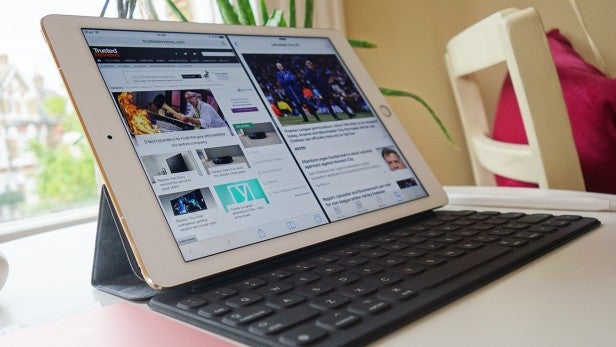 Performance-wise, the 9.7-inch iPad Pro is fantastic. Opening up games, scrolling through image-heavy sites, using two apps simultaneously and so on, never causes any slowdown or lag. In Geekbench 3, it scores 5,121 and 3,039 on the multi- and single-core tests respectively. This might be slightly lower than the 12.9-inch iPad Pro, but it blitzes the Android competition such as the Pixel C.

It is likely that the two most intensive tasks you can do on the iPad Pro are 4K video and high-res photo editing. Since the 9.7-inch iPad Pro natively shoots 4K footage, you can capture it on the tablet and splice it up immediately in the free iMovie app. Doing this is, again, lag-free and snappy.

I edit plenty of photos, normally on my 2014 Core i5 MacBook Pro with 16GB of RAM. However, for this review I switched to the 9.7-inch iPad Pro and I’m hugely impressed.

Although many may dismiss Lightroom and Pixelmator as “not full desktop” services, both are seriously powerful mobile apps that can handle a variety of large file types with ease. Having such power in a tablet is great since the process of editing snaps on a touchscreen feels natural; sliding toggles with my finger is better than using a mouse.

As you’d expect, this tablet doesn’t feature any other ports aside from Lightning. You won’t be able to plug in a USB drive – as you can on a Microsoft Surface Pro 4 – and there’s no card slot for transferring snaps from your camera. The closest you’ll get here is the Lightning-to-SD dongle, but this is another addition and something you’ll have to remember to take with you when heading out and about.

The lack of a USB port, even a Type-C variant, is restrictive and limits the “Pro” capabilities somewhat. 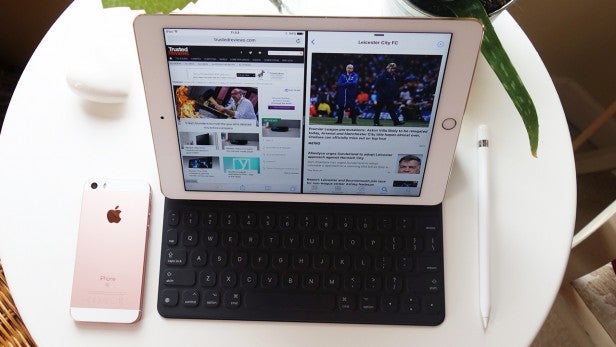 I’m even less enthused about the inclusion of only 32GB of base storage, especially when the iPad Pro costs £499. For 128GB, you’ll have to part with £619, and 256GB models cost a whopping £739. That’s a lot of money for a tablet, and almost encroaches on MacBook Air territory. In my opinion, a base 64GB option at £499 would have been far more reasonable.

Like it did with the larger iPad Pro, Apple is selling a duo of accessories for the 9.7-inch iPad Pro.

The Pencil will work on both the larger version of the iPad Pro and here too. For obvious reasons, however, the Apple Smart keyboard for the 9.7-inch iPad Pro isn’t compatible with the larger model; it’s smaller. It’s wrapped in a tough, water-resistant fabric though, and acts as a Smart Cover for the tablet that protects the display when it’s in your bag.

The keyboard’s size does bring some downsides. It’s far more difficult to hit the keys accurately, and as a result typos will be commonplace in the early days. Following practice I can now type accurately and quickly on it, but it becomes tricky again if I don’t use it regularly.

The keys themselves are reminiscent of those on the 12-inch MacBook, with little travel but a satisfying “clack” nevertheless. They’re not backlit, however, which is a real annoyance, and there’s no Function or shortcut keys. There are some shortcuts built into iOS 9, but they’re limited to native apps and a smattering of third-party ones. For instance, you can scroll down a page with the arrow keys in Safari, but not Twitter.

There isn’t a trackpad either, so you’ll still be reaching out to touch the display most of the time.

Mobile keyboards have come a long way recently and they continue to improve. The Microsoft Surface Pro 4 and its fantastic Type Cover are still sitting pretty at the top of the pile, and while Apple’s Smart Keyboard really can’t compete with it for pure typing experience, I’d happily choose it over the tightly packed keys on the Samsung Galaxy TabPro S and Huawei MateBook.

My main issue with the Smart Keyboard, however, is the lack of adjustability. There’s a single position that might be great for typing, but it’s too laid back for watching a video in bed. I found myself attaching an older Smart Cover for dedicated Netflix binges, since its upright angle is more to my taste.

Still, it’s stable when propped up and I can even work comfortably with the iPad on my lap. I wasn’t expecting this to work the first time I tried it considering the size.

The Smart Keyboard is decent, but there are plenty of areas in which Apple could make improvements for a second iteration. Regardless, I’d still recommend the £139 accessory if you plan to use the 9.7-inch iPad Pro for any sort of real work. It’s slim and light, doesn’t require charging, and is actually quite comfortable to type on once you’ve familiarised yourself with its quirks. 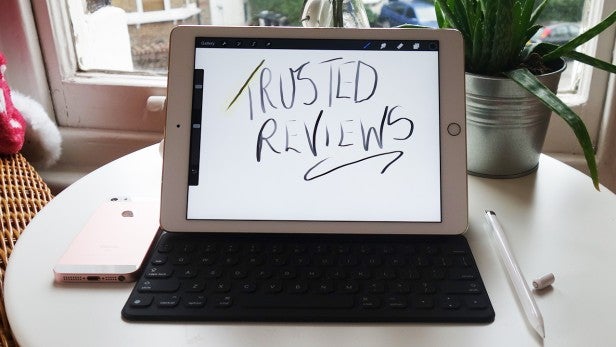 Things couldn’t get any better with the Pencil, however – I love it. In my opinion, it’s the best stylus out there – and my opinion has changed significantly since I began using it with the first iPad Pro.

It may lack the 1,000+ levels of pressure sensitivity available with a Wacom stylus, or the Surface Pen, but it’s super-accurate and there’s precisely zero latency when you’re drawing or jotting down notes.

While the bigger iPad Pro is great for sketching, I’d say the 9.7-inch iPad Pro is better for general note-taking due to its smaller canvas. Writing with the Pencil is akin to writing on paper, with the fantastic palm-rejection software helping to no end. I can lean on the tablet and knock-out notes during an interview as easily as if I were using a notebook.

Support for the Apple Pencil might not be universal quite yet, but a growing number of apps support the input tool.

Paper by FiftyThree is the best: a beautiful app that’s great for sketching, painting a watercolour or just doodling – although after weeks of trying it appears my lack of artistic flair means I can’t craft anything that could be described as “good”. Notability is great for note-taking, while Procreate is another decent pick for wannabe artists. 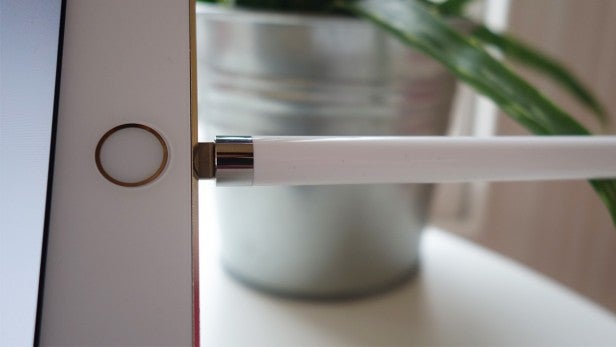 It’s not all rosy, though, with many of my initial issues regarding the Apple Pencil still standing.

Its charging method – sticking it into the iPad’s Lightning port – is about as silly as it gets and is an accident waiting to happen. In addition, there’s still no place to rest the stylus when it isn’t in use, meaning you’ll spend an inordinate amount of time either panicking that you’ve lost the £79 piece of plastic, or rummaging in your bag to find it.

Tablet photography is still an inane idea to me. Yet, if you’ve been to any tourist hotspot around this fine world you’ll know that many love it.

If you’re one of those folk then you’ll love the 9.7-inch iPad Pro, since it has the best camera on any tablet. 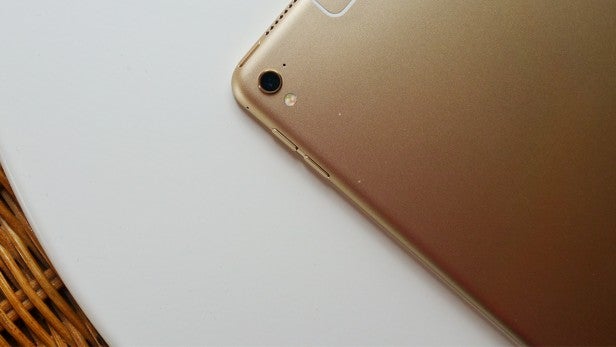 Apple has pretty much taken all the camera tech from the iPhone 6S and crammed it into this iPad. It has the same 4K-capable, 12-megapixel camera on the back with an f/2.2 aperture and the same 5-megapixel FaceTime HD sensor around the front.

It’s a huge upgrade over any previous iPad, and it feels odd that Apple didn’t fit out the 12.9-inch version with the same specs, although taking pictures with such a big device will be awkward. 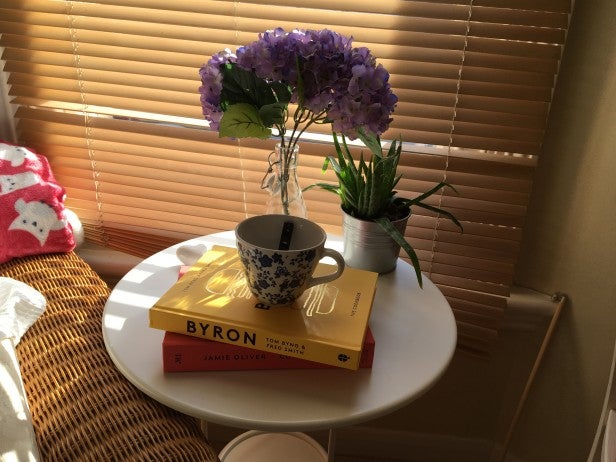 The camera captures shadows well, and exposes fantastically. Fantastic for a tablet

On me, however, it’s wasted – especially the rear camera. My tablet photography amounts to snapping documents, and the high-resolution sensor here is complete overkill. It also means that there’s a hump on the back of the device, which somewhat ruins the smooth finish of the rear. 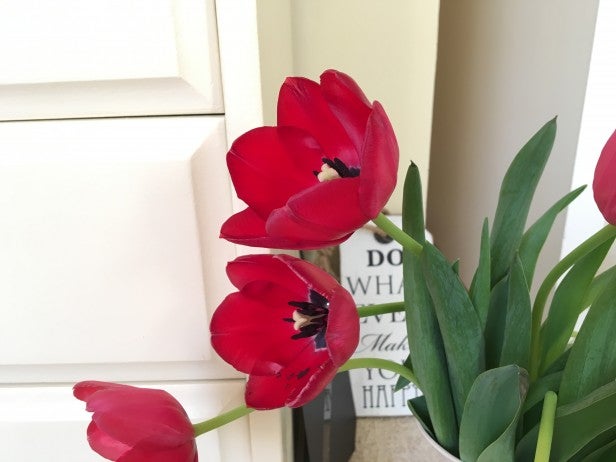 Colours are bold, although maybe lacking some oomph

It does take decent pictures, on a par with those shot with the iPhone 6S. Naturally, there’s no OIS, but it captures sharp details and accurate colours. Having an iPad as a viewfinder is great, but in my eyes you’ll look a berk using it as an actual camera. Sorry, but it’s true.

However, there will be some merit to it for people working on the go. I can imaging a fashion designer taking a quick pic of dress and drawing changes or an architect wanting higher quality snaps when looking at a project for the first time. 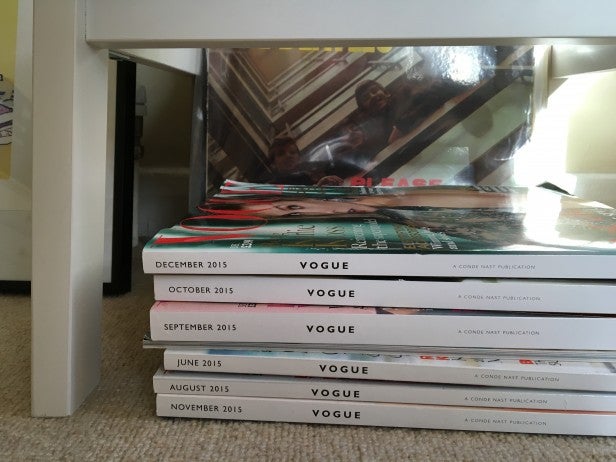 For a tablet, this shot has plenty of detail

Again, the 4K video looks great and the device is powerful enough to shoot and edit it using iMovie. Impressive for a tablet.

I’m more on board with the switch to a higher-resolution front camera. Not so much for selfies, even though they look good, but for FaceTime chats – something for which the iPad is the perfect tool.