iOS 9 wasn’t a huge rethinking of the software – that might come with iOS 10 later this year – but it did introduce a few juicy features that really come into their own here. I’m going to focus on these here, but if you want the full low-down on the OS then check out our iOS 9 review.

The most significant feature added is split-screen multi-tasking, something most had been calling for since the introduction of the first iPad. Being able to use two apps side by side is a must on a tablet, even more so if you’re calling it a “Pro” device. 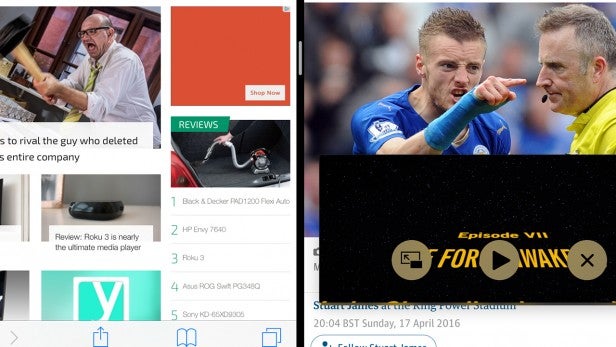 Apple’s implementation of multi-tasking is good, but it feels very much like a first-generation attempt that will see improvement over the coming years.

It is possible to open two apps at the same time, but those apps need to support the feature. While there are many that do, a couple that I use on a daily basis – such as Google Docs and Netflix – do not. Discovering an app that can’t be used impacts my workflow and shows the limitations of the system.

I’d also like to be able to have two Safari windows open next to one other, but for some reason this isn’t possible. It’s frustrating experiences such as this that put paid to the idea of this being a “laptop replacement”.

The Slide Over feature lets you pull a separate app out momentarily – to check the football scores on Twitter, for example – and videos can be put into a floating box. Again, apps needs to support this. For peak productivity you can have two apps open and a floating video in the corner. While this isn’t quite laptop level, it’s a start.

In my opinion, iOS on a tablet suffers from too much wasted space. The icons on the desktop are too generously spaced apart and you need to jump into apps to get any sort of information from them.

Still, its tablet app support is leaps ahead of both Windows 10 and Android Marshmallow – and that’s the all-important fact. They don’t feel like blown-up phone apps, but bespoke experiences. 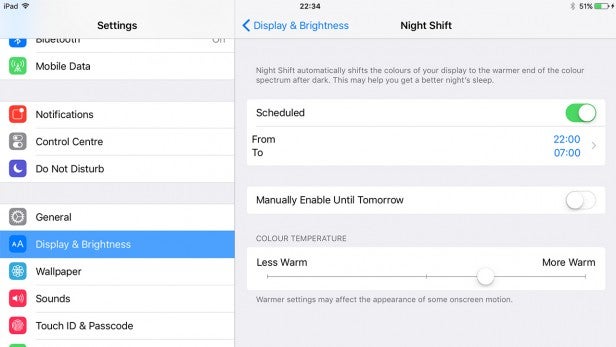 iOS 9.3 introduced a nifty new feature called Night Shift. This reduces the amount of blue light given off by the display during the later hours of a the day. Having too much interaction with these blue hues is said to disrupt the deepness of your sleep.

The 9.7-inch iPad Pro has a large, 29.7Wh battery that Apple claims will last for 10 hours. That’s the same figure it quotes for the iPad Air 2 and iPad Pro 12.9-inch – and, based on my testing, is pretty much spot on.

Three hours of Netflix streaming at about 60% brightness reduces the battery by 26%. However, jacking up the brightness takes its toll on the iPad Pro’s battery life. Set to maximum and the speakers set to half, the 9.7-inch iPad Pro’s battery lasts for about six hours. That’s the same as the larger iPad Pro. 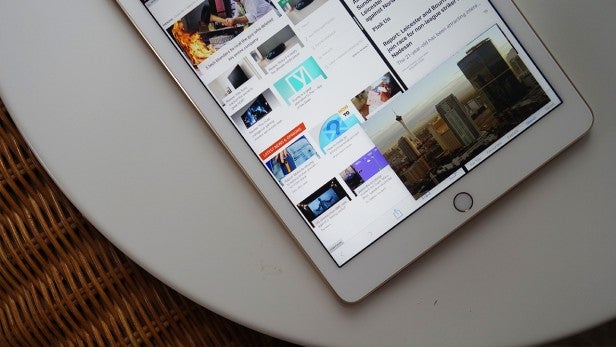 Testing out gruelling 3D games is always a good way to gauge battery life. For every hour of Halo: Spartan Strike, the 9.7-inch iPad Pro lost 16% – that’s with brightness on 60%. This is actually an improvement on other iPads. Less intensive titles, such as Monument Valley, chew through about 10% battery per hour.

In general use the 9.7-inch iPad Pro will get you through a couple of days without you needing to reach for the charger. Multiple hours of having two apps open, a video playing and the Smart Keyboard attached, however, will bring down this figure dramatically.

Charging is via a Lightning cable, and as with all tablets I’d recommend using the wall adapter that supplied with the device. I’ve tried charging it with a typical phone block and it takes significantly longer to juice up – at some points it even drops more battery than it recoups. 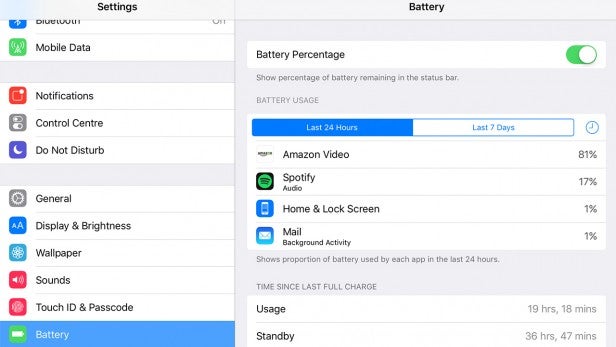 I really do wish Apple would implement some form of fast-charging. For the larger iPad Pro it is possible to pair a Lightning to USB-C with a USB-C-enabled wall port to achieve some sort of quicker charging. However, since the 9.7-inch version of the tablet doesn’t support USB 3.0 speeds, this won’t work here. A full charge will take about three to four hours.

The 9.7-inch iPad Pro offers decent battery life, but it doesn’t push it any further than other iPads.

Is the 9.7-inch iPad Pro going to replace a laptop for most? Absolutely not. Sometimes you just want a USB port, an SD card reader and the ability to run lots of apps at the same time.

Is it the best tablet out there? Yes. It takes all the oomph from the comically large iPad Pro 12.9-inch and crams it into an incredible thin and beautiful chassis.

It isn’t as all-purpose as the Microsoft Surface Pro 4, which is a great device, but it’s better at being a tablet. It’s easier to chuck in your bag, use in bed, whip out on the train and so on. The Pixel C is the only real Android competitor, but Google’s OS simply isn’t there yet when it comes to actually “getting things done”.

The True Tone display, booming speakers, improved performance and support for the Smart Connector set it apart from the iPad Air 2, and the bump in cost is just about worth it.

I’m also completely smitten with the clever Pencil; it’s changed the way I take notes and doodle. It’s a simple tool that might not pack the specs of its competition, but it does a fantastic job.

Yet, there’s no doubting that this is an expensive product. £499 for the base tablet, £79 for the Apple Pencil and £129 for the Smart Keyboard (both of which aren’t required, but are necessary to get the most out of it) add up to a pricey investment. Especially if you already have a powerful Windows 10 or Mac OS X laptop.

It won’t replace your laptop, but the 9.7-inch iPad Pro makes tablets interesting for the first time in years.