So far, with one or two honourable exceptions, the burgeoning pocket projector market has felt a little half-baked. Depending on which brand you’re talking about, you’ve either got projectors that try so hard to produce good pictures that they forget about delivering practical designs or features, or you get projectors so obsessed with being small or cramming in features galore that they forget to pay attention to picture quality. It’s rare to find a pocket projector that manages to combine both attributes together. But that’s precisely the feat 3M’s new MP180 just about manages to deliver. 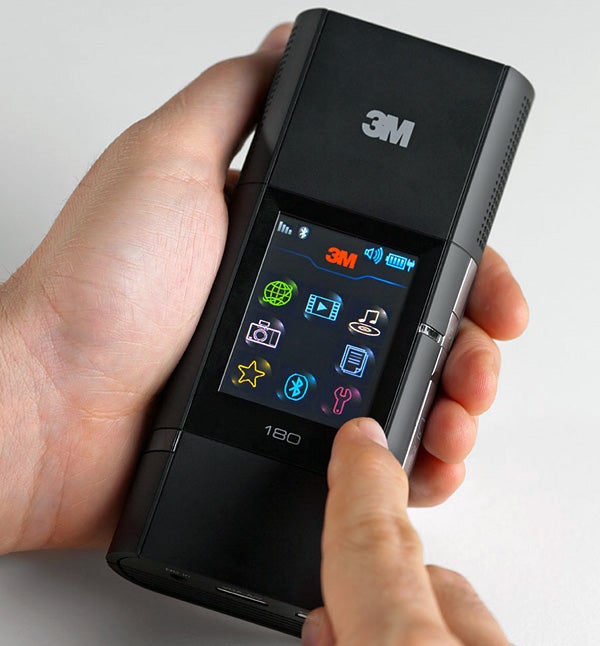 One of the many things that’s had the gadget fraternity buzzing about the MP180 ever since it was first announced around six months ago becomes obvious as soon as you look at it. For there, occupying a good proportion of its top side, is a 2.4in colour LED screen. What’s more, it’s a touch-sensitive screen, meaning you can access the MP180’s features just by tapping gently on the onscreen icons. Introducing smartphone-like control to such a portable device feels wonderfully appropriate. 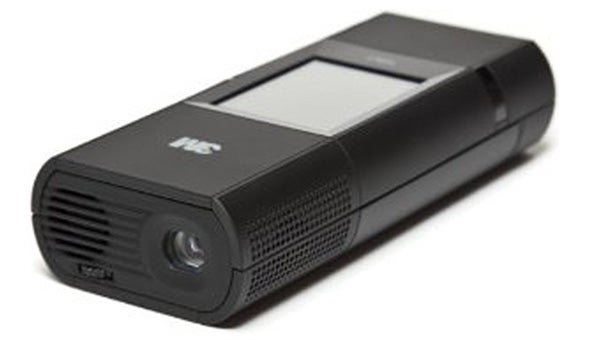 The whole form of the MP180 feels natural, actually. Its finish is tactile and just ‘rubbery’ enough to stop it slipping too easily through our eternally clumsy fingers. The lens is at the front and the main connections are at the rear, which helps the projector maintain balance and a straight line at the wall/screen better than if it was forever having its petite form pulled sideways by side-mounted connections. It weighs just 338 grams. And finally, while not being in the same league of tininess as Optoma’s PK101, it’s still diddy enough to fit very comfortably into a typical jacket pocket – especially given its elongated, rectangular shape. 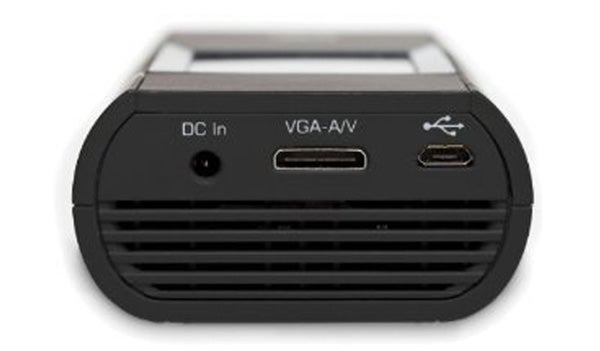 Connections are straightforward and remarkably flexible. The projector’s back end houses a simple but tight-fitting DC input, a mini USB port, and a VGA/AV port that can take a variety of different connectors via adaptor cables. Supplied as standard are a D-Sub adaptor and a composite video/stereo audio adaptor. Plus you also get a USB cable, a soft carry pouch, a battery, three Female RCA adaptors (giving you a means of extending the very short supplied composite/stereo audio cable), a soft carry pouch and even a surprisingly robust little desktop tripod.


Optional cables include an Apple iPhone/iPad/iPod connector, a car charger, and a component video adaptor.


There are a couple more interesting connections down the projector’s side, namely a slot for adding a microSD card, and a headphone jack. The latter of these is self-explanatory – but actually the best way to get really good sound out of the MP180 – while the former lets you add extra storage capacity to the already impressively large 4GB built into the projector’s chassis.

Being able to store large presentations, slide shows, and even videos within the projector is clearly a hugely convenient feature, as it means you don’t necessarily have to take any separate source equipment with you. In fact, couple this with the fact that the MP180 can run for the best part of two hours off an internal battery and you have a pocket projector that’s genuinely capable of working as a totally standalone, cable-free device.


You don’t even need to use cables to port your files into the MP180’s memory, for impressively it supports Bluetooth file transfer. And if even that isn’t teccy enough for you, then how about this: the MP180 has built in Wi-Fi so that you can access the Internet and access a presentation or streamed content you’ve stored on your website! Or you can just browse the Web at large, obviously. 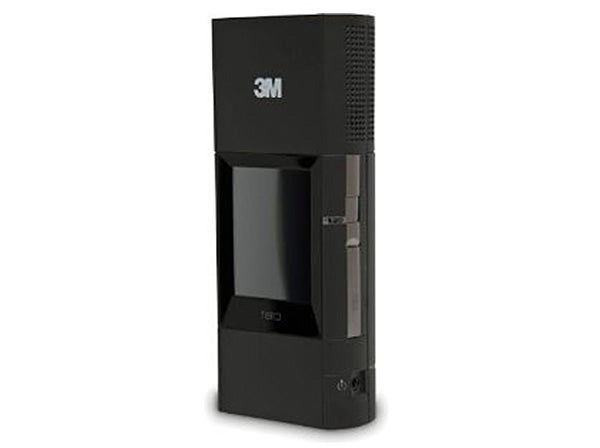 
Having satisfied ourselves that there really isn’t much we could throw at the MP180 that it wouldn’t happily execute, we started to set the projector up. Which took all of 30 seconds, given that all you have to play with are a simple drop-down flap for adjusting the image height and a straightforward focus wheel next to the lens. There’s no zoom, but this is true of almost all other pocket projectors too. To adjust the image size you just adjust the projector’s distance from the screen. 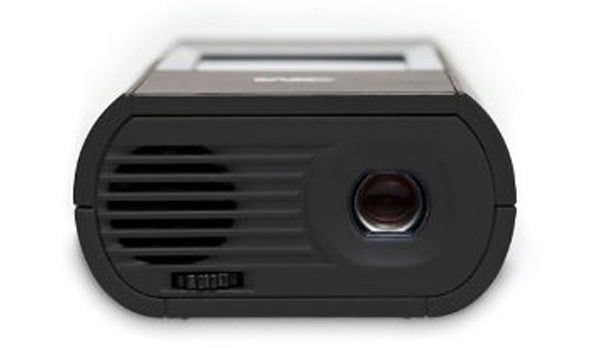 During set up we also ran our eye down the MP180’s spec sheet, and found a claimed 30 Lumens of light output – enough to comfortably get an 80in image out of the MP180, reckons 3M. The specs also refer to 2 x .75W built-in speakers, a 20,000-hour life for the LED lamp system, and a native SVGA (800 x 600) resolution. We felt momentarily disappointed that this resolution equates to a 4:3 aspect ratio rather than a widescreen one, given how many videos and photos these days employ a wide format. But this is a pretty common state of affairs for the pocket projector market.


After genuinely exciting us is with its enormous practicality, the MP180’s picture quality slightly disappoints, at least at first. We’d foolishly started to imagine that the MP180’s revolutionary tendencies would extend into its performance too, but this is definitely not the case.


Images certainly don’t enjoy the punch in terms of contrast or colour response seen on the best-performing pocket projectors – especially Samsung’s H03. The contrast, in particular, is really very average, leaving dark scenes looking grey, flat and washed out, while colours tend to look rather muted and tinged with green.


The DLP technology at the MP180’s heart also means you can see the rainbow effect – stripes of red, green and blue – if you flit your eyes around over the image.

However, once we’d got over the basic fact that the MP180 isn’t going to rewrite the pocket projector picture quality book, we started to reflect on a few positives. Certainly the overall picture standard is a considerable improvement over that of the MPro150 we reviewed a few months back. Sources look much sharper and more detailed for a start – a result down at least in part to the MP180’s higher native resolution. This is, of course, particularly beneficial with text-based presentations.


Colours are also less distractingly ugly than the scarily offkey ones found on the MPro150, and most important of all, the picture is much brighter, meaning it’s possible to achieve a genuinely watchable image at a larger size than you could with the MPro150. Personally from our experiments we’d say you probably need to stop at around 65-70in rather than the maximum 80 claimed by 3M, but even 65in is a respectable maximum size for a pocket projector as genuinely portable as the MP180.


In fact, this is really a key point. For while ‘chunkier’ pocket projectors might outperform the MP180 for brightness and especially contrast, by the standards of genuinely slim pocket models, the MP180 performs rather well. 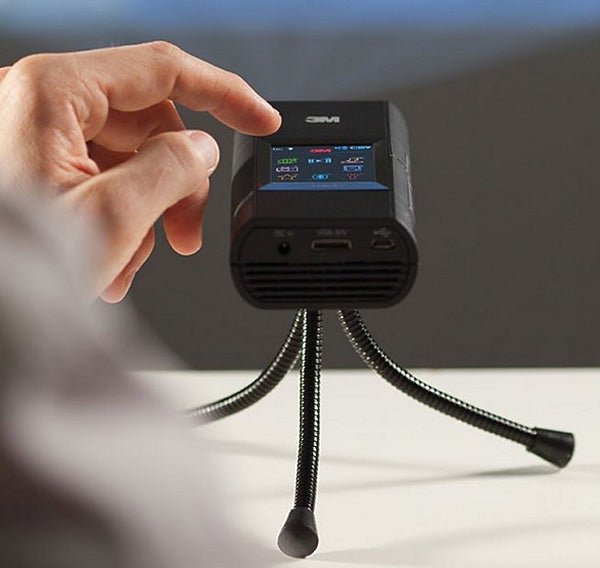 It’s worth adding, too, that the MP180’s extra brightness means it can be used in brighter environments than the MP150 – though as much darkness as possible is still highly recommended!


The MP180’s built-in speakers, meanwhile, aren’t as bad as you might think from their 2 x 0.75W power rating. Sure, there’s absolutely no bass at all, and even at maximum the volume levels it can achieve are barely adequate for a pretty small room. But the sound is, at least, unusually clear – perhaps as a result of using two speakers instead of just one.


We do have a few other beefs with the MP180, though. First, there doesn’t appear to be any easy way of calling up the main menu on the touchscreen once you’ve started watching something. An ‘instant menu’ button like you get on iPads and iPhones would have been very helpful.


Also, while we initially loved tapping away at the decently sensitive control screen, we quickly found ourselves wishing for a remote control. Yet with the MP180 you can only get a remote as an optional extra.


Finally, the projector does whine a bit, as if it’s working really hard all the time. This is underlined by the fact that it can also get mighty hot. So much so that even the touchscreen panel can feel uncomfortably warm after you’ve had the projector on for a while.


The MP180’s rainbow effect and lack of contrast prevent it from totally winning our hearts. However, provided you’re not intending to watch too many Hollywood blockbusters on it, it’s nonetheless a stunningly designed, thoughtfully conceived, feature-packed, cable-free and above all groundbreakingly flexible pocket projection temptation – one that’s a lot cheaper, quicker to use and easier to cart about than your average laptop.