Breaking this combi duck is the 3M CP45. For, despite being genuinely pocket-sized (roughly equivalent to a pair of iPhones strapped back to back), the CP45 really does squeeze a DLP projector and digital camcorder into its tiny frame. What’s more, neither of these combined gizmos appears – on paper at least – to have been as compromised as we might have expected.

Remarkably, for instance, the camcorder is HD, with a recording resolution of 1280×720 (though you can reduce the resolution to save memory space if you wish, with DVD, VGA and QVGA options available). The 5MP sensor the camcorder uses can also deliver three, five or eight megapixel digital still photographs, and there’s built in automatic light compensation to adjust the sensitivity of the LCoS image sensor depending on the light conditions you’re shooting in.

There’s even a multi-step zoom, though this is digital rather than optical, so you can expect image resolution to deteriorate with every ‘step’ forward the zoom goes. 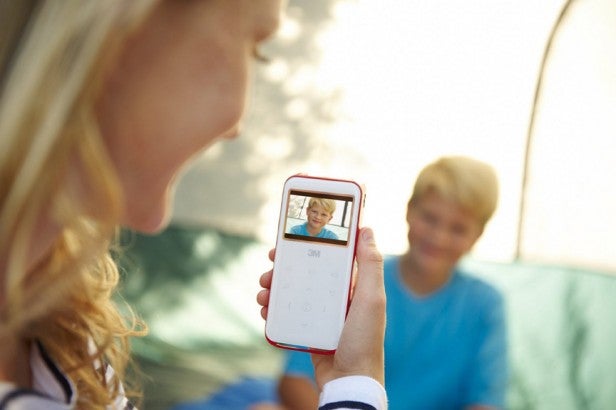 You can store the video you record onto either 2GB of built-in memory, or optional MicroSD card (up to 32GB). If you stick with the built-in memory, it should hold around 1000 photos or 40 minutes of HD video.

It’s also worth adding that the CP45 has a startlingly bright LED ‘torch’ positioned under its lens that you can turn on when filming or photographing in low light conditions.

As for the projector part of the CP45, it’s claimed to deliver an image up to 65in across with a brightness of 20 Lumens – a quite high figure by Pico projector standards. The only potential issue where the projector is concerned is that its resolution of 800×600 is neither HD nor widescreen.

Other than saying that it’s genuinely pocket-sized, we haven’t dwelled yet on the CP45’s design. But it definitely deserves to be dwelled on, for it’s one of the most attractive bits of gadgetry we’ve seen.

At just 125(h) x 61(w) x 24(d)mm (assuming you’re holding it vertically in ‘filming’ mode), its sheer smallness for a combi product is naturally a draw in itself. But also very attractive is its high-gloss white finish, complete with a clear ‘top-sheet’ that ensures that the buttons on the bottom half of the fascia and the screen all co-exist in the same smooth plane. 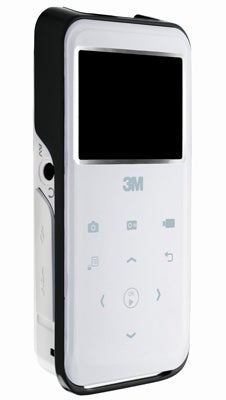 The built-in screen/viewfinder measures just over an inch across, while the 10 buttons below it are touch sensitive and backlit. Around the CP45’s edge runs a bold black ‘trim’ (the red version shown in the first image is not available in the UK) which widens over the top third of the unit, towards the projector end. The rear (or front, depending on your point of view!) of the CP45 contains a lens, the aforementioned ‘spotlight’, and a hole you can use for screwing the unit horizontally to an optional tripod.

Down the sides are a silver on/off slider and a fair roster of connections that includes an AV input (for receiving composite video and stereo audio signals via a provided adaptor), a mini HDMI output (no cable for this is provided), the microSD card slot, a headphone jack, and a USB port for charging the battery or transferring video and photo files to a computer.

It’s notable from these connections that there’s no straightforward way to connect a PC to the CP45 for demonstration purposes, but it certainly can be done with the right adaptors. And anyway, the built-in camcorder makes the CP45 a much more ‘domestic’ gadget than your typical, business-oriented Pico projector.

The CP45 feels well balanced and gorgeously tactile in your hand, and most of the buttons feel like they’re in the right places. The only exception to this is the way you have to use the keypad’s up and down buttons to adjust the digital zoom, when some sort of ‘wheel’ adjustment on the CP45’s side would have been easier.

Other options of note within the CP45’s onscreen menus include adjusting the resolution of the photos and videos, and choosing between 60Hz and 50Hz recording.

Wandering around the house and garden filming and taking photos, we were really impressed by the CP45’s built-in screen/viewfinder. It’s big enough and bright enough to be clearly visible in all but the most intense direct sunlight, and can even be looked at from a slight angle without its contrast and colour completely disappearing.

Colours on it look a bit insipid compared to the ‘real life’ you’re filming, but this doesn’t really matter as the little screen is just a practical device; all that matter is that colours are actually recorded with decent vibrancy and accuracy.

The quality of the video recordings made by the CP45 is also impressive in terms of the amount of sharpness and detail retained. There’s certainly no doubt that you’re watching HD recordings – at least when you’re watching them on an HD screen…

The extent of the CP45’s recorded HD resolution is all the more impressive because it’s achieved without the picture succumbing to lots of grain or other noise, even during quite low-light viewing.

The CP45 camcorder also handles motion better than expected, be it something moving within the frame or a brisk horizontal pan. Certainly there seems to be less resolution loss and judder than we get with one or two more expensive dedicated digital camcorders. 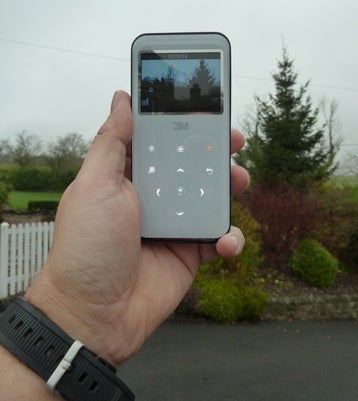 We do have two gripes with the camcorder part of the CP45, though. First, the digital zoom is, as feared, largely pointless. For as well as only moving forward in ugly jerky steps, it also causes the picture to lose sharpness and definition with every step of zoom you introduce, to the point where images at maximum zoom look unwatchably unfocused.

While it’s easy to avoid this problem by just not using the zoom, we didn’t find a way to get round the other issue: fluctuating brightness levels. You will always get these to some extent with any camcorder, as it adjusts its optics to compensate for changes in the image’s brightness. But the CP45 makes so many adjustments that they can be distractingly excessive if you’re trying to film something while moving around a lot.

We guess some people might feel bothered that the sound recorded by the CP45 is only mono. And it is true that sound on your recordings can appear a little thin and tinny. But in our opinion the sound quality is actually adequate for a casual, ‘fun’ product.

Turning to the CP45’s projector, its abilities depend on which angle you approach it from. If you come to it from previous experience of a typical Pico projector, you’ll be pretty impressed, whereas if you – actually unreasonably – come to it from a ‘normal’ projector perspective, you’ll be less blown away.

Compared with most other Pico projectors, the CP45’s images impress on a series of fronts. For starters, they’re startlingly bright considering they’re coming from such a small unit. This is important on two levels. First, it means the picture looks solid and dynamic rather than wispy and flat. Second, it means you can watch the picture larger than you often can with Pico projectors. Even at 47-50in with a little ambient light around the CP45’s pictures are perfectly watchable.

The projector also impresses with its colours. Many Pico projectors suffer either muted or glaringly unnatural colour palettes, but while the CP45 might lack the resolution to deliver subtle colour blends, at least its tones look decently authentic and punchy. 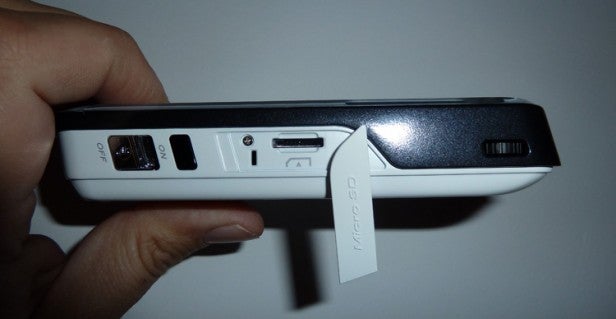 Next on the projector’s ‘hit list’ is its freedom from the sort of dotting, fizzing noise that often comes with Pico projectors. Also, it’s even got a pretty good contrast range – something only a handful of other Pico models can boast.

The projector’s biggest weakness finds colours ‘bleeding’ and trailing when showing reasonably swift camera pans. This is so noticeable that it quickly starts to inform the way you shoot using the camcorder, avoiding fast camera pans where possible because you know they’re not going to look great when you play them back. (For the record, the smearing is definitely caused by the projector, not the camcorder – recordings look fine in this regard when played on a PC.)

The final problem we have with the CP45’s projector is its resolution. For as noted earlier, its 800×600 pixel count means it isn’t as high in resolution as the camcorder and employs a native 4:3 aspect ratio versus the widescreen ratio of the camcorder. This means it’s inevitably not capable of delivering the maximum quality of the footage and photographs you’ve taken using the camcorder.

But while it seems a bit daft for 3M not to have made the projector at least the same aspect ratio as its camcorder, in reality the resolution of the images it produces is perfectly adequate for the casual circumstances they’re likely to be watched in. 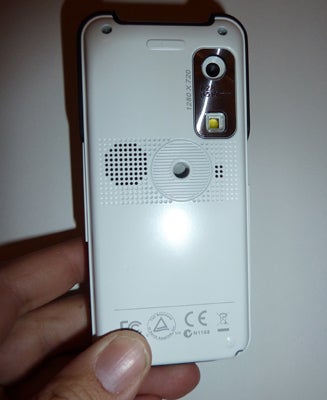 The last thing we should point out about the CP45 is that during our tests, its battery tended to run out when using the projector after between 90 and 100 minutes, or around 2.5 hours when filming. Though this latter figure plummets if you use the ‘spotlight’ a lot.

Verdict
The over-eagerness of the camcorder’s brightness adjustment together with the colour smearing issues with the projector ensure that the CP45 should not be considered a replacement for separate dedicated camcorder and ‘big screen’ solutions.

But that’s not really the point.  For the CP45 is expressly designed to be a convenience product for recording and watching ‘on the go’, and in this respect it both performs better than expected (especially if you adapt your shooting techniques to its limitations) and represents decent value to boot.

Even better, it’s likely to inspire gadget envy in anyone who beholds it, and this alone is enough to set the pulse of any self-respecting gadget hound racing!