Virtual Reality is often viewed as the future of gaming by both companies and consumers. But, while everyone from Valve, HTC and even Microsoft see the tech’s potential, none have been able to agree what shape VR gaming controllers should take.

The 3DRudder is a third-party attempt to answer this question. However, unlike the Oculus Rift and the HTC Vive controllers, 3DRudder doesn’t focus on players’ hands. Instead the control aims to let gamers interact with virtual worlds using their feet.

Unlike many VR controllers, 3DRudder is cross-platform. It connects to computers via a USB cable and is compatible with any Windows 7 PC and above, with either an AMD Phenom or Intel Core processor and 2GB of RAM or more.

I tested it on an Asus gaming notebook with an Oculus Rift, although a spokesman told me it should work with other VR headsets. The only limitation he mentioned was that it will support a maximum weight of 130g, although considering you’re meant to use it sitting down, I don’t see this being an issue.

Once set up, the controller simply requires you to download 3DRudder drivers from the company’s website, calibrate the control, and from there you should be good to go. 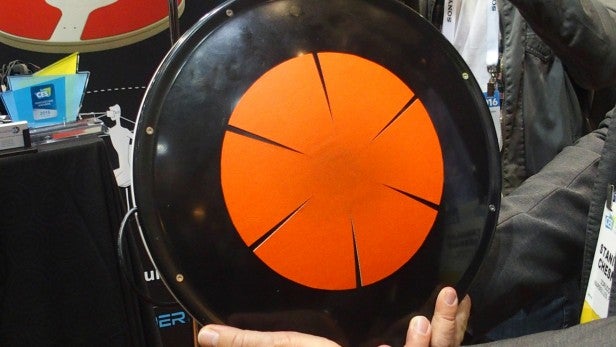 The 3DRudder is a 37cm circular disc that you place on the floor. The controller is designed to work in a similar vein to a joystick and lets you traverse digital worlds using foot movements.

For example, to move forward I simply had to lean my feet in the direction I wanted to go – the controller’s gyroscope sensor kicked into action to propel me forward. Similarly, if I wanted to turn I simply had to twist my feet left or right, and my on-screen avatar would adjust its angle.

What’s more, thanks to the inclusion of an accelerometer and pressure sensor, I was also able to use the control to move up and down – creating a flying effect. To move up I just had to apply forward pressure using my right foot and backward force using my left. Reverse the process and I was able to fly downwards.

This may sound a little weird, but during my demo I found the controller oddly intuitive to use. Within 10 seconds of having the controls explained, I was shooting around the demo world, both on the ground and in the air.

I was also impressed at how reactive the control was. Unlike many of the motion controls I’ve used, 3DRudder was noticeably free of lag, and enacted my commands with no discernible delay. This made it easier for me to immerse myself into the virtual world I was exploring – this could be a big selling point for the controller.

The fact I was using the controller sitting down also helped to reduce the nausea that can sometimes occur when using VR headsets.
Related: Samsung Gear VR Innovator Edition review 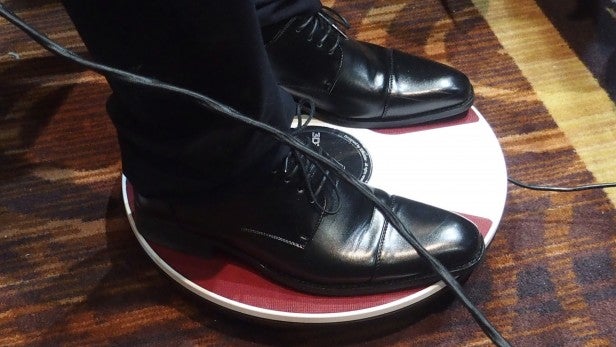 3DRudder – But will it work?

3DRudder will reportedly work with “most” PC games, but I only got the opportunity to test it in a bespoke, sandboxed demo world. This leaves questions over whether it will be compatible with many competitive games.

The movements are great and intuitive for exploring virtual worlds, but I can’t see them being accurate enough for matches in first-person shooters or racing games, for example.

That said, until I’ve had a chance to see how 3DRudder handles real-world use, I’ll have to reserve judgement. 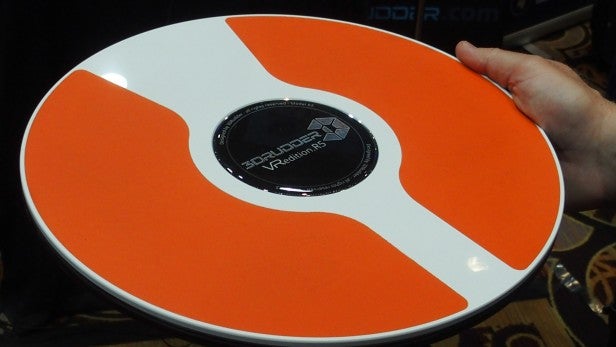 My competitive gaming concerns aside, I’m very impressed with 3DRudder. On the Oculus Rift, the tech offered an intuitive and responsive way to interact and explore VR worlds. My 15-minute demo with the tech left me wanting more, and I’ll be eager to see how it performs with actual games when it’s released in March this year.

However, with pre-order pricing starting at €175 the controller is a little expensive, especially when you consider that you’ll have to shell out further cash for a VR headset to get it working.

Check back with TrustedReviews later this year for a full review of 3DRudder.