There may be a veritable hive of activity in the home and small business wireless router market with pre- and draft- standards flying all over the place but 3Com has never taken any notice of this. It has always waited until a standard has been proven to be ratified and trustworthy before sticking its neck out. This does mean its OfficeConnect wireless routers lag behind the rest in terms of features and it’s only now that it has finally released a version that supports 108Mbps high speed wireless connections. However, as we found out, the product has a wealth of issues, though these are not obvious at first.


As its lengthy moniker suggests this little slab of plastic offers support for Internet access over ADSL and backs it up with a firewall and a SuperG 802.11g wireless access point. It offers a four port Fast Ethernet switch and integral ADSL2/2+ modem and backs this up with plenty of tough security measures plus optional web content filtering.


Installation kicks off by pointing a web browser at the unit’s default IP address and running through a quick start wizard. This sets up the country of operations for wireless operations plus the ADSL connection and asks for your ISP account details. Worry not if you don’t know your VCI and VPI values as the router checks through a predefined range until it finds the ones that work with your ISP.


It all seemed so simple but try as we might we couldn’t get Internet access even though the router confirmed we were correctly logged on to our ISP. Incredibly, it turned out that the setup routine has enabled the SPI firewall but left NAT unchecked. The manual doesn’t mention this all-important feature and the only way to enable it is to step through manually editing the WAN connection details. With NAT now in action our Internet access sprung into life. 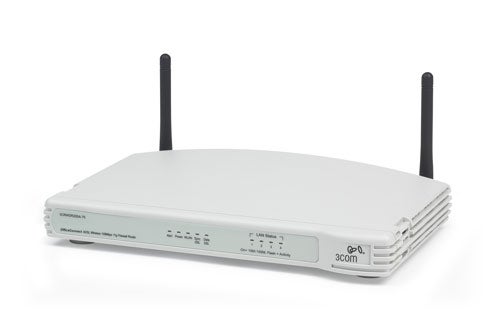 The router’s web interface is easy enough to navigate and the home page sensibly warns that the default wireless settings leave encryption switched off. This is easy enough to remedy and you can pick from a wealth of options. Basic 64/128-bit WEP is still available but you also get WPA, WPA2 and RADIUS and you can select mixtures of these three as well. The SSID can be masked and you can implement a MAC address access list. Usefully, different profiles can be created and saved to the local PC for later use. 3Com’s WMM feature could prove useful as it automatically prioritises four traffic categories including voice and video. Support for WDS (wireless distribution system) also means the router can act as a repeater to other compliant wireless routers for extending range.


There’s more fun to be had with the firewall settings as you can create up to 32 virtual servers and route specific inbound traffic to them. These are identified by protocol and port and 3Com provides a pile of predefined services to choose from. Once you’ve registered the product you also get fourteen days to play with 3Com’s hosted web content filtering service. You can pick and choose from eight core categories and over thirty general categories and allow or deny each one on an individual basis.

During testing we found it worked well with the filter blocking the majority of sites that fitted into categories we had set to deny. Each request is relayed to the selected web site for checking and we found there was virtually no hit on general browsing performance. No custom warnings can be sent to users as their browser will simply display the standard message that a web site cannot be found. You do get URL blocking as standard but this requires a list of up to thirty URLs or keywords to be manually created. However, you can also create policies that block or allow Internet access for LAN systems during scheduled time periods on selected days.


We ran wireless speed tests using 3Com’s neat little XJack 108Mbps PC Card which has a pop-out aerial allowing it to be pushed safely inside the card body when not in use. With it installed in a 1.6GHz Fujitsu Siemens notebook running Windows XP SP2 we saw Iometer report an average raw read throughput of 42Mbps over a line of sight unsecured link with a Pentium D PC on the LAN. With WPA-PSK encryption in the mix speed dropped down to 38.4Mbps. 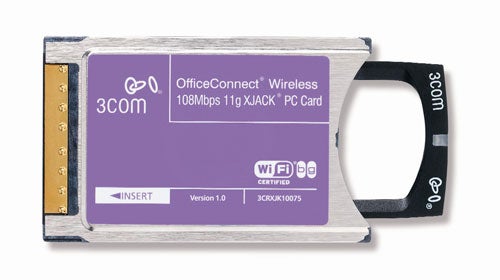 This 3Com package does offer a lot of valuable security features in a compact unit but it was really annoying to find that virtually any modifications to the router required a reboot and this even includes any changes to the content filter categories. Of more concern was the fact the base of the router got quite toasty during testing and occasionally the alert LED would come on showing that the system had failed and required a complete power down and restart.


At first glance this looks a good value communications package but the numerous problems we experienced leave us with no option but to recommend avoiding it. The setup routine is fundamentally flawed, all modifications no matter how small all require a reboot and the review unit suffered from a number of system failures during testing. 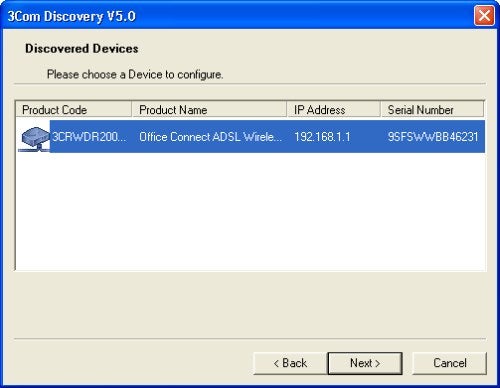 For initial setup go straight to the router’s default IP address or use 3Com’s Discovery tool to find it. 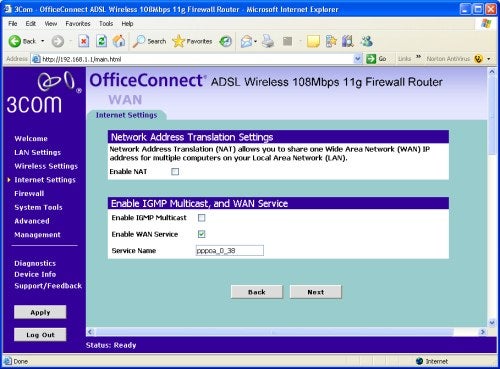 Oops. 3Com’s wizard forgot to enable NAT and with this switched off we couldn’t get any Internet access. 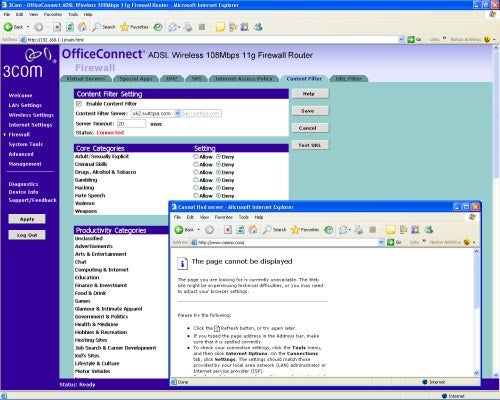 The optional filtering could prove useful as it provides plenty of categories to block or allow. 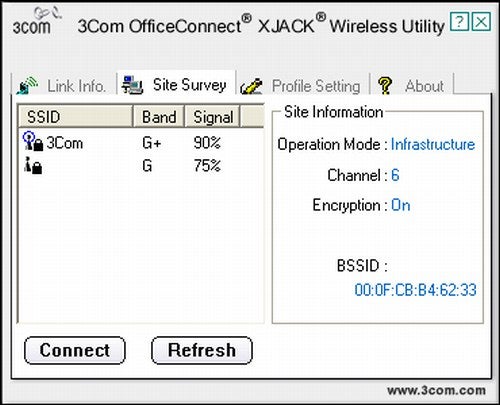 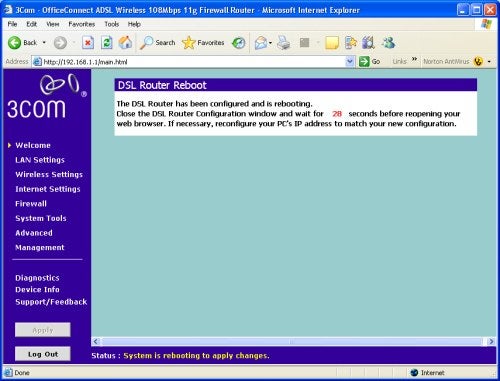 During testing we saw this screen more times that we care to remember.