It’s by turns gripping, thrilling, suspenseful, preposterous, badly flawed, ridiculous, engaging, exciting, appalling and practically unmissable. In a sense, 24: The Game couldn’t be any more like 24 the Series.


In so many ways, 24: The Game is an object lesson in how to export a successful TV series to a video game. It looks, feels and sounds right. The in-game models resemble their TV counterparts about as much as Playstation 2 technology allows, and with the original actors providing voices, it doesn’t take a huge leap of imagination to find yourself sucked into a great lost season, sitting happily between season two and season three. Stylistically, it’s all there: the creeping, handheld camera; the dramatic score; the signature use of split-screen to cover events from two angles or as a transition between multiple events; the clock updates; the final ticking down and cut-to-black as each ‘episode’ ends. 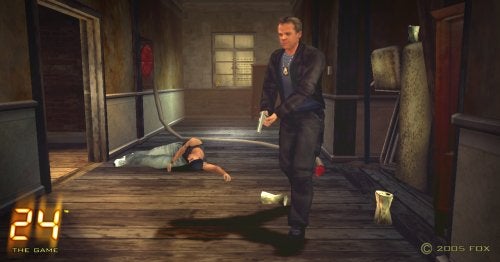 What’s more, the script is pretty much spot on. Like the series itself, it veers dangerously close to self-parody at times – does Jack ever chill out? Does Kim have no instinct for self preservation? – but the narrative has all the sudden twists, misleading innuendo and shock revelations we expect from the series, and it’s all dealt out in the same breathless fashion. Of course, the real-time element has been dropped – in the unlikely event that you played straight through in one sitting without dying, 24: The Game would run less than half the length of 24 the series – but the game has maintained the TV version’s sense of urgency. And as with the series, what starts off as a small-scale terrorist threat soon develops into a deeper plot with more horrifying ramifications. You just know that the guy who seems like the mastermind will be revealed as a pawn before the story reaches its end. And for once, nobody seems to be sleepwalking through the lines; everyone from Kiefer Sutherland downwards puts their all into the dialogue, with only the odd casual background line – the “What are you doing here?” sort of stuff – sounding silly, awkward or misplaced. 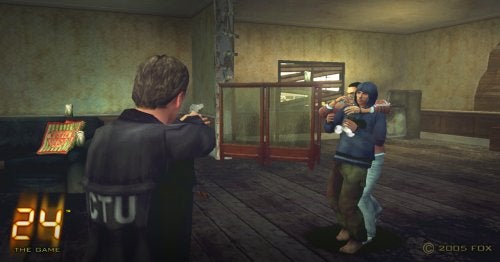 In fact, if we were marking 24 for how faithful it is to the TV show, it would easily get an 8 or 9 – the guys at Sony Cambridge really have done an amazing job. Sadly, on the producing an enjoyable, entertaining game front, things don’t look nearly as rosy. 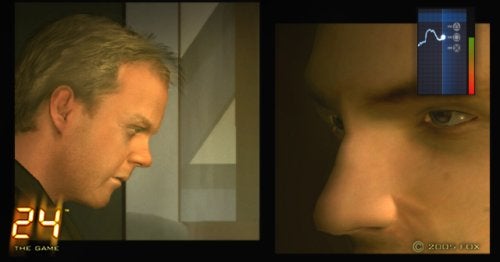 OK, so the decision to avoid focusing on one game type, embracing various genres and activities makes sense – I don’t like to think how dull and unrepresentative of the series 24: The FPS or 24: The Interactive Adventure might have been. I also like the fact that the game takes time to focus on different characters, including the unflappable Tony, the earnest Michelle and the disaster-prone Kim. That’s something that the series has always done as well. However, it has to be said that the result is a game of many, many parts, not all of which gel as they should.


The mainstay is third-person action, with Jack or one of the others exploring hostile territory, packing heat and taking the terrorists down. It works a bit like last year’s unfortunate Bond adventure, From Russia With Love, with an auto-targetting system that enables you to nudge the aim for precision shooting, plus a neat cover feature that has you ducking behind walls or boxes, then popping out to take the shot. The levels are a little sparse, the AI is weak and the design is unimaginative, yet these bits are surprisingly enjoyable. The sad thing is that they’re probably the best bits of the game. 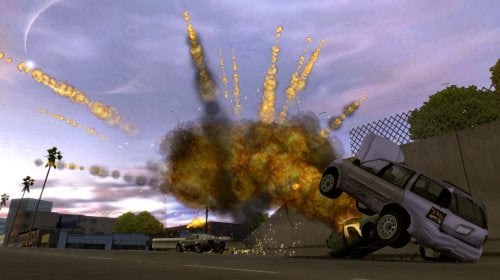 The worst bits? Well, there’s quite a lot of competition there. The stealth sections are mildly appalling, with Jack or Kim having to roam around, crawl through ducts, avoid guards and electronic sensors, while achieving various objectives. It’s dull, frequently frustrating and often plain ridiculous stuff. However, while woeful, they’re not quite as disastrous as the driving sections, where you have to find a particular spot on the map, often within a time limit, and with either gun-toting goons or the authorities – though in Los Angeles, there’s not too much distinction – on your tail. If anything, the AI has been tuned too aggressively, making it impossible to make progress while four cars slam into you on all sides. The overall effect combines the misery of urban navigation with the stress of continual harassment – something you’re probably already familiar with if you’ve ever been on a driving holiday with your partner. However, 24 takes it to a new level. At one point, I realised that the only way to end a particular sequence was to ensure all the pursuing police and FBI cars exploded. Now, I know Jack plays hard and fast, but I think even he stops at such wilful carnage. 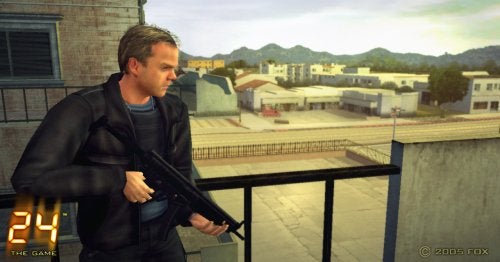 There are moments that show more imagination. There’s a great chase scene where a sprinting Tony has to avoid the stuff that his running target throws in his wake, and some surprisingly well done interrogation scenes where you modulate Jack’s approach to tune in to the nervous state of the subject. Normally the speed at which Jack moves between soothing tones and barked threats – “You’re going to give me that information, because you don’t want the alterntative” sort of thing – might raise eyebrows, but hey, it’s all very 24. We also get a cool find the hitman section, followed by an even better shoot the hitman section, and at least the bits where you have to hack your way through systems using a simplified circuit-linking puzzle are fairly simple. I know some may moan that they’re hardly realistic, but what else would they want? For you to spend the next forty minutes hard-coding a virus in Assembly? 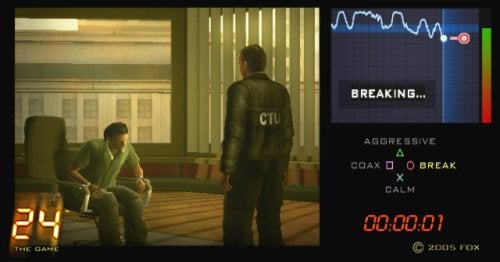 Still, taken as a whole, it’s all a bit sloppy and inconsistent, and you’ve probably played most of this before and done better in Metal Gear Solid 2 or 3, Need for Speed: Most Wanted or Fahrenheit. Even the graphics vary dramatically, with a smooth frame rate and some nice effects improving the mostly bland action sequences, while the driving sections suffer from pitiful texture detail and a stop-start frame rate. You keep thinking, after Black, Burnout: Revenge and God of War, surely the PS2 is up to more than this? Again, the best-looking bits are the cut scenes, just because you get close to the action and can see how detailed and well-modelled the characters are. That’s really the amazing thing: Sony Cambridge has created the one game where you look forward to the bits that usually annoy you by breaking up the gameplay, and actually don’t want them to end. In fact, it’s practically the opposite of Metal Gear Solid 2 and 3. 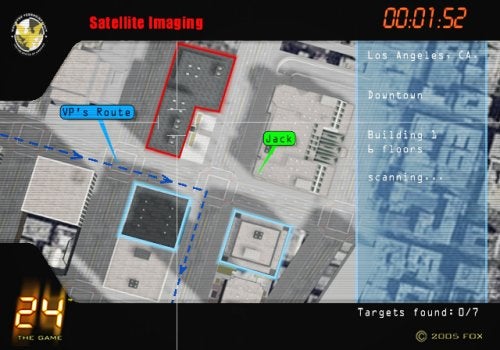 But here’s the thing – no matter how shocking the gameplay gets, the authentic 24 atmosphere just keeps pulling you through. Even when you know it’s rotten, and that you’re going to have to spend the next 20 minutes engaged in a tiresome and repetitive task, you do it just to see what the plot has to offer next. And that’s why I’d recommend fans of the show – and only fans of the show – rent the game over a weekend and just treat it like an extra, interactive DVD boxset. It might not be the game that changes your life, but you will want to play through it once.


Sony Cambridge gets it half brilliantly right, and half horribly wrong. The result is a great ‘lost’ season, even when it’s a poor excuse for a game.