The 1MORE True Wireless ANC tick all the boxes you’d expect of premium wireless earbuds, but there’s little that stands out in what is fast becoming a competitive market. A solid, if unspectacular, true wireless offering

1MORE launched its first pair of true wireless headphones in 2019, and now the company is back with a more advanced ANC version. 1MORE has ambitions to take on the best, with its eyes set on toppling the likes of Sony’s WF-1000XM3.

That approach brings to mind a quote from Omar, the memorable stick-up man from The Wire. “You come at the king, you best not miss.”

Does 1MORE hit the target? Let’s find out.

The 1MORE True Wireless ANC earbuds went on sale in early 2020 for the sum of £199/$199/€199. That price places it in-between the more premium priced earbuds and mid-range market.

Similar to the WF-1000XM3, 1MORE’s earbuds protrude from the ear. Viewed from a certain angle, they look like a pair of Wellington boots that you’ve put in your ears.

Despite their bulbous look, they sport a glossy, patterned finish that matches their price. Aesthetically speaking, they’re one of the more stand-out designs. 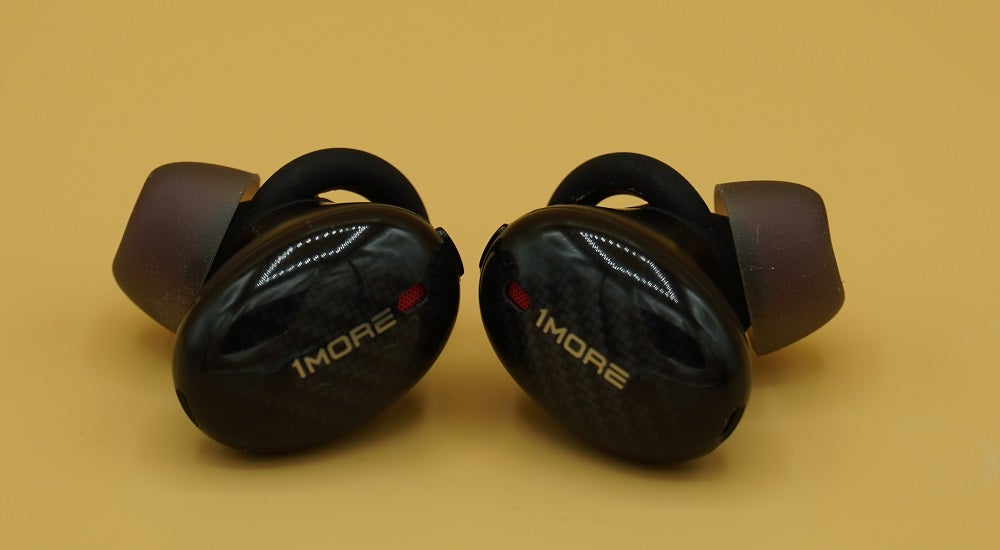 Each earbud weighs just 7.9g and features a detachable O-hook/wing-tip for better fit. Wearing them for prolonged periods, I didn’t at any point feel as though they might fall out of my ears.

The 1MORE True Wireless ANC strike a good balance control-wise, offering both physical and touch controls. To activate ANC requires a double tap on either earbud, but if you want to pump up the volume, stop/start your music or take a call, then this is achieved via a button that sits on the end of each earbud. If you’re only using one earbud, controls will need to be adjusted in the 1MORE app. Whether it’s touch or tactile controls, the 1MORE proves responsive to inputs. 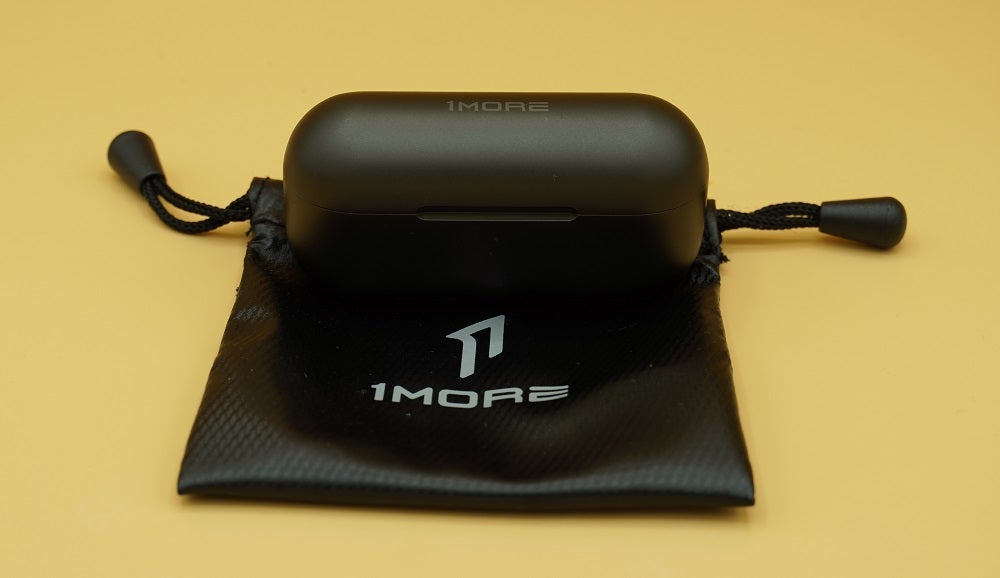 The 1More True Wireless ANC come in a slim case that’s well suited to being slipped into pockets for travel. If you don’t want them to become dirty or scratched, then there’s also a small drawstring bag in which you can carry both the buds and charging cable together.

The 1MORE True Wireless come packed with features – and it’s best to start with their most touted feature.

1MORE’s hybrid ANC uses feedforward (external microphones) and feedback (internal) to suppress noises at two levels (High and Mild), as well as a passthrough option for those who want awareness of what’s around.

The performance is solid enough, although not to the point where I’d say the top dogs in this arena have anything to worry about. The feature clears up everyday sounds sufficiently, but is less impactful in dealing with cars and other vehicles. 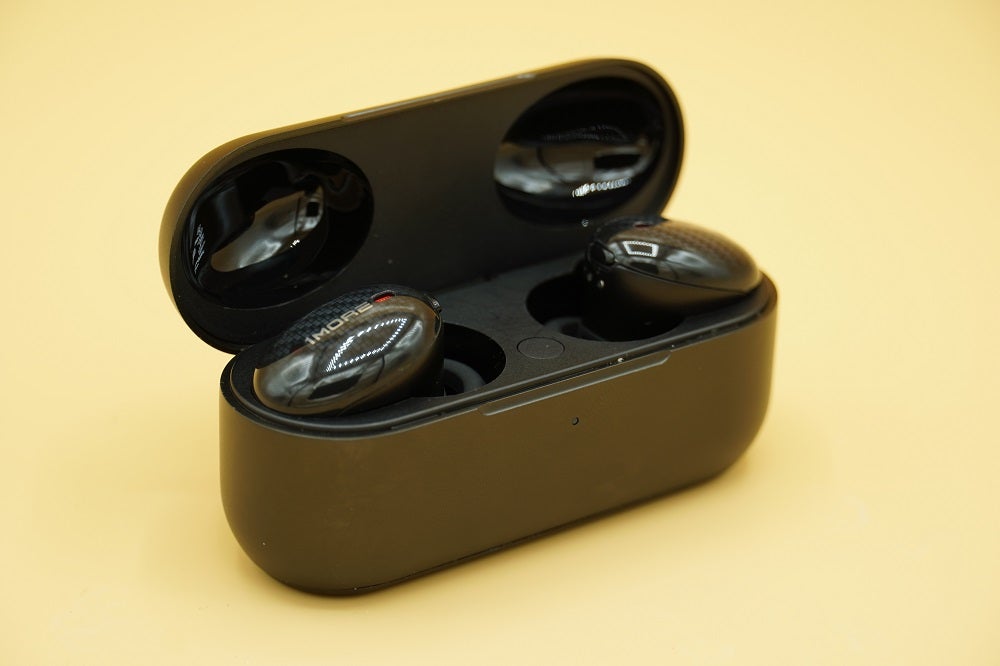 Battery life is 22 hours in total with ANC turned off – six hours in the earbuds and a further 16 in the case. Turn ANC on and that drops to 5 hours per charge, 13 in the case for 18 hours in total. That’s less than either the Sennheiser Momentum TW2 or Sony, but enough to get through several days of use.

For those with a wireless charging mat, the 1MORE True Wireless ANC are Qi compatible. Charging the earbuds to full takes an hour, while the case, via its USB-C connection, takes two hours. A quick 15-minute top-up is enough for two hours of playback.

SBC, AAC and aptX – the latter codec not always a given for a premium true wireless – are supported. If you’re interested in using these earbuds for exercise, then be aware that they don’t have a waterproof rating.

The 1MORE True Wireless ANC are compatible with Bluetooth 5.0 and feature support for Siri and Google Assistant voice control. A post-launch update has fixed issues with powering on and auto-play, which are now more reliable.

1MORE True Wireless ANC audio quality – Updates have made them better, but competition is tough

Post-release updates have made the True Wireless ANC a more solid pair of headphones, resolving some ANC and audio issues.

Prior to the update, switching on ANC made the bass uncomfortably hard and unnaturally boosted the volume. With ANC off, Daft Punk’s Too long displayed tight, enjoyable bass. With ANC on, bass became too overpowering to enjoy.

That’s now been fixed but it hasn’t changed my feelings about the overall sound quality – which is solid, but unspectacular. Compared to the Sony, these earbuds present a more forward-sounding tone; but in other regards they fall short of  their award-winning rival. 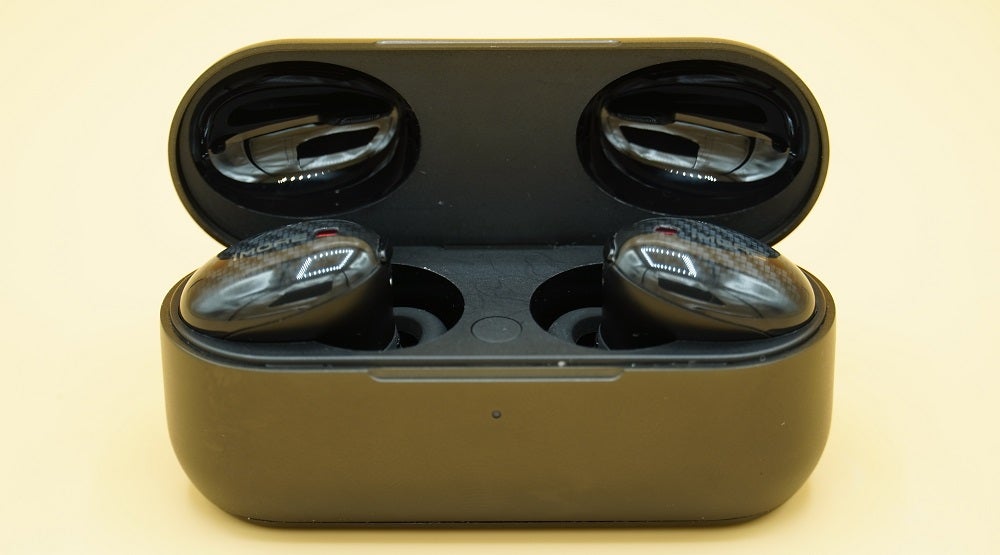 For one, the soundstage is narrower and dynamically it feels less capable. The sound is also on the thicker side, although not to the extent of the Audio-Technica ATH-CKS5TW. The Sonys offer more clarity, a bigger sound, beating the 1MORE in terms of expression. Watching Ruth from Alexandre Desplat’s The Shape of Water is more dramatic in its telling, with the Sony WF-1000XM3 digging up more detail in the mid-range and treble. 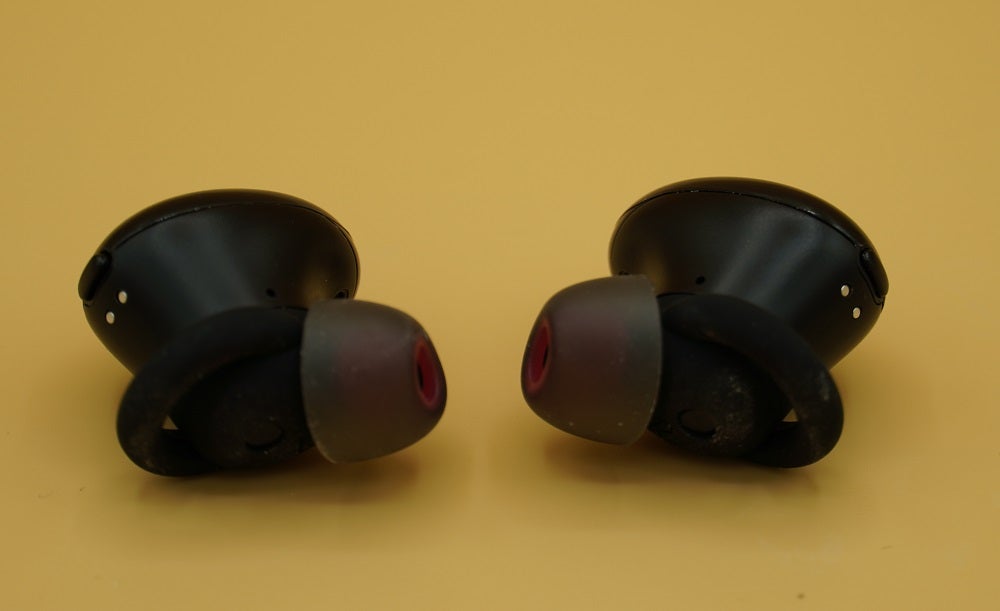 In another track – John Williams Prelude and Main March from Superman: The Movie – timing could be sharper and bolder; but the presentation is mainly fine and enjoyable. There are moments where instruments sound vaguely off, with the snare drums in Theme from Ant-Man sounding less detailed and snappier.

In the end, the 1MORE True Wireless ANC prove that they’re solid and competent performers, although not enough to ruffle the feathers of the likes of Sony, Sennheiser and Shure.

You should buy the 1MORE True Wireless ANC if…

The 1MORE’s best feature is its fit, with the wing-tips giving them a secure and stable fit.

These earbuds offer a mix between touch and physical controls and the combination proves effective enough.

You shouldn’t buy the 1MORE True Wireless ANC if…

The 1MORE’s have Sony in their sights, but their audio quality is not as good as its award-winning rival

And the Sonys outgun them in the noise cancelling stakes, as the 1MORE’s performance is just fine.

There’s no stated IP rating for this earbud so we wouldn’t use this for more athletic purposes.