Budget brand Dihl bucks the 1200W cleaner trend with this compact, affordable 1400W bagless cylinder vacuum. The combination of a powerful motor with multi-layer filtration and a 2-litre dustbin promises big cleaning for a small outlay.

It certainly packs a suction punch, evident from the howling motor, but the poorly designed tools don’t translate all that power into cleaning performance – and that’s a bit of a Dihl breaker. 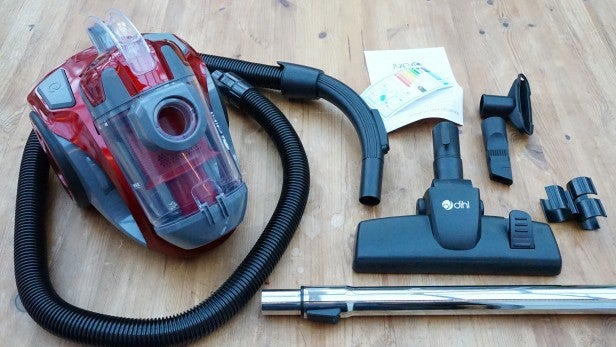 When you’re strapped for cash but desperately need a vacuum cleaner, there’s no shortage of inexpensive bagless cylinder cleaners around. They’re usually from brands you’ll never have heard of – such as Dihl.

This Dihl eschews the budget-standard 1200W motor in favour of a more powerful 1400W unit to try and boost its street cred – and cleaning performance. This is backed up with a good-sized 2-litre bin capacity, whose large flap at the bottom opens for emptying. The flap release uses a thumb button that simply flexes a soft plastic clip and we do wonder quite how long it will last before it breaks. 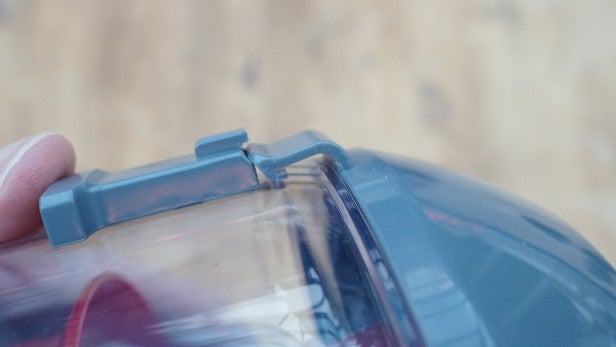 There are three layers of filtration. A folded material and a foam filter are housed in the top of the bin and a post-motor dust filter hides behind a grille at the rear. All are washable, although the energy label’s D rating for dust emissions suggests they’re not up to much.

The hose is nicely flexible but is only 1.45m long, ending in a simple curved handle with a suction release thumb slide. The metal telescopic tubes are a nice touch at this price, as is the little clip that holds the two detail tools on the handle or tubes.

The tools themselves are a plain upholstery tool and a combined crevice tool with flip-over dusting brush. If you have read many of our other budget cleaner reviews you’ll have seen the latter before. Yet, despite its popularity, it’s too short, too fat and the brush too small to be of any use at all. 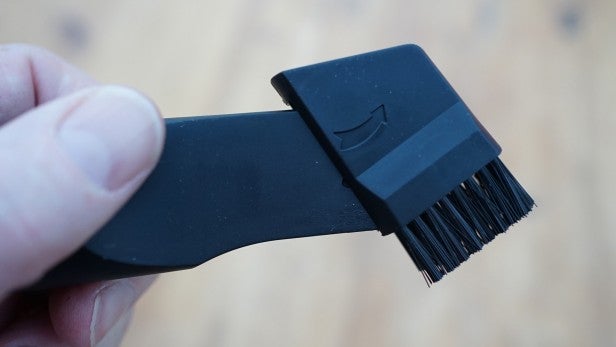 The main floor head is a tradition carpet head with drop-down bristles and rear rubber blade for hard floors. It’s quite compact with wheels to help it roll, and a few degrees of tilt to keep it flat to the floor. The cleaner’s cable is a bijou 4.5m in length, so don’t expect to whizz around the house without having to swap plug sockets frequently. 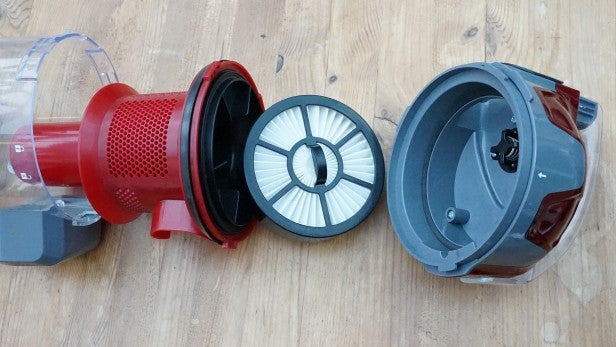 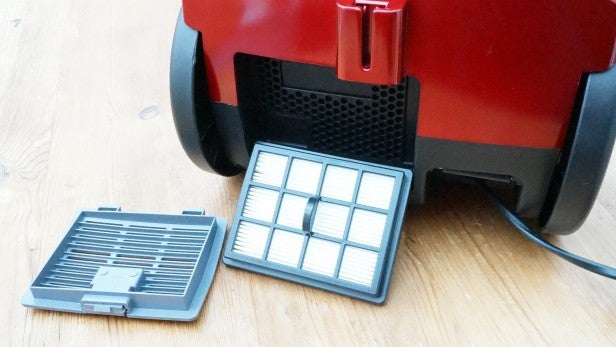 Dihl 1400W Cylinder – How does it clean carpets and hard floors?

Budget cleaners rarely impress us with their cleaning performance, and the Dihl doesn’t break with that trend – at all. Despite its bigger-wattage motor, there’s less suction at the nozzle than many similarly priced 1200W machines we’ve tested. On the plus side, this does mean that the floor head doesn’t tend to stick down to carpeted floors – but nor does it pick up much either.

Starting with the hard floor test, the floor head’s front bristles managed to sweep most of the mixed oats particles in front of it without allowing them into the airflow. It then dumped them back in the same place on the backstroke. Meanwhile, the rear rubber blade is too stiff and had the same effect as you pull the head backwards. 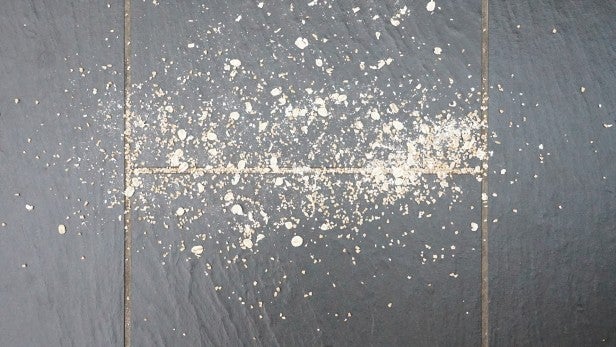 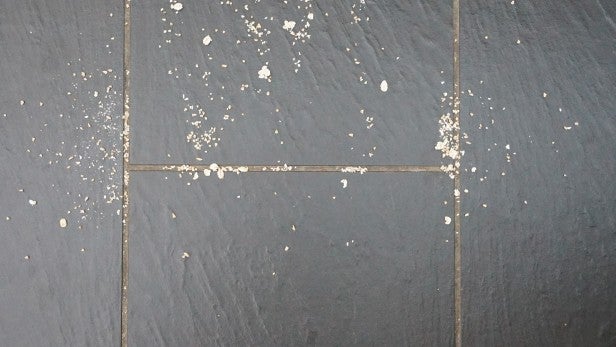 This firmly ensured most larger particle debris was dragged backwards and kept clear of the suction of the floor head. By the time we’d chased oats over the kitchen for five minutes, we just about managed to pick up the small handful of test material. 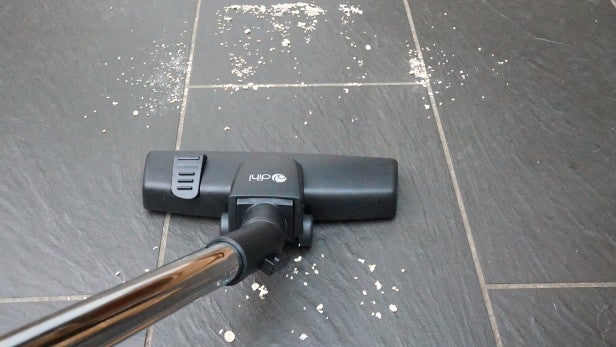 Moving onto the carpet test revealed that much of the hard-floor test particles had become lodged on the floor head’s brushes and brush channel. Raising the brush with the foot-switch resulted in the debris being dumped onto the carpeted floor in a different room.

When we cleaned up that lot and got around to the actual carpet test, there was a glimmer of hope on this model’s performance. Our mix of freshening powder and baking powder appeared to clear up relatively well on open carpet.

However, closer inspection revealed something of a surface clean only. You could still see grains of the baking powder loitering deep in the pile, and this was worse close to the skirting. The poor suction and ropey floor head design meant that there was a lot of powder left in the gap after you’d run the head along the skirting. 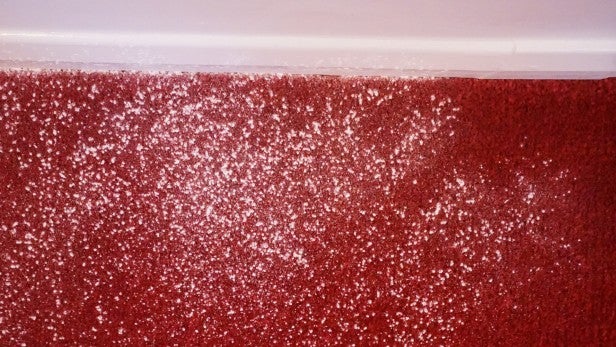 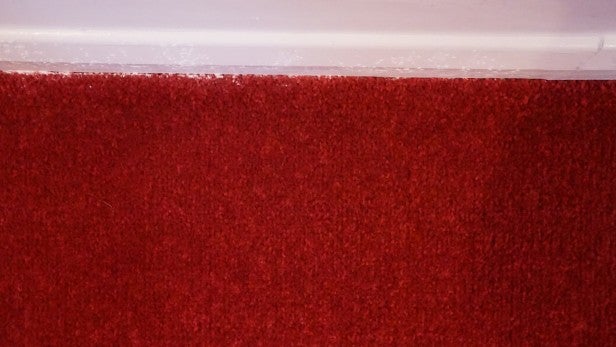 The upholstery tool didn’t prove too bad, though. The machine’s so-so suction and the tool’s side vents make for fairly easy and effective sofa scrubbing.

The combined crevice and brush tool did surprise us, however – by being even worse than we anticipated. Not only is it the wrong size and shape to be effective in either mode, this model howls like a banshee when the dusting brush is flipped over. We measured this noise at a whopping 92dB (think leaf blower-like volume), drowning out the already noisy 85dB of the cleaner itself.

Having just used the dusting brush, both dogs had run off to another room for some peace and quiet, leaving plenty of hair on the rug and dogs’ beds. Given the performance of the floor head on carpet and the limited suction of the cleaner, it came as little surprise that most of the pet hair on the rug remained following 30 seconds of going back and forth. In its defence, the Dihl got there in the end – but there wasn’t any real ability or talent for the task in hand.

On hard floors it wasn’t so mediocre – it was worse. The stiff drop-down bristles at the front of the brush very effectively picked up stray pet hairs, and kept them there without pulling them into the airflow. This resulted in a floor head that resembled a giant hair-ball by the time we’d been around the entire kitchen, with much less hair actually inside the bin. A broom would have been more effective. 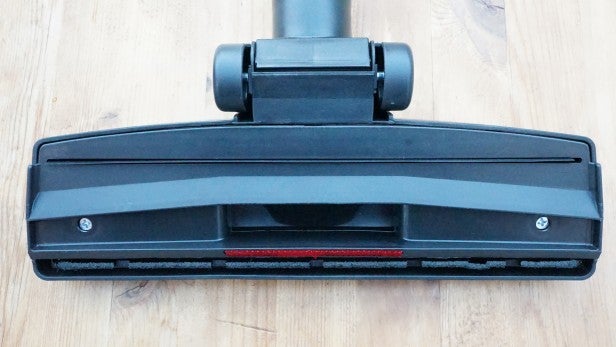 Hope for a glowing review for the Dihl had faded somewhat by the time we got to the stairs. The Dihl’s very short 4.5m cable and shortish hose means reach is limited, and in our house – where plug sockets are few and far between – we were unable to get to three steps in the middle of the flight.

For those with sockets closer to the staircase, carrying the nicely light (3.5kg bare) Dihl upstairs is the way to go. The handle balances well and the compact footprint means it will sit comfortably on steps if you want to put it down for a rest. The main floor head is neither too large or heavy, so we used this effectively on our carpeted stairs, attached directly to the handle without tubes.

The low-ish suction power again helped manoeuvrability, but the limited articulation of the head did mean we needed to switch to the upholstery tool to get into corners and turns. Given the poor efficacy of the floor head on hard surfaces, you’ll be left wanting for a tool if you have bare-wood steps. 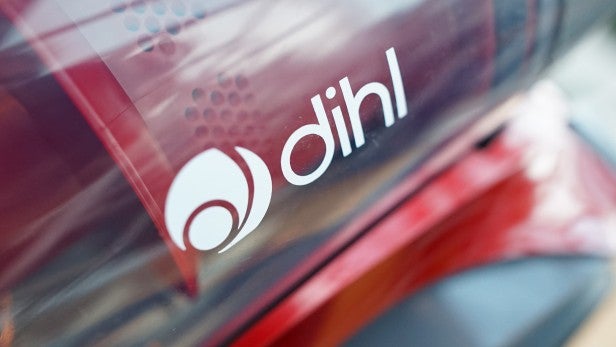 Should I buy the Dihl 1400W Cylinder?

In a word, no. In amongst poor E-rated energy efficiency, low suction power, poor dust emissions, grim cleaning performance and woefully designed tools, the Dihl’s decent-sized bin and bargain-basement price are its only redeeming features. Yet, appealing as that low price ticket is, there are plenty of other bargain-basement cleaners out there that simply do a better job.