No Apple is complete these days without a “Retina” screen – a genius piece of branding if ever there was one. The 12-inch Macbook is no exception and the 226ppi (pixels per inch) IPS screen is every bit as good as that found on the 13-inch MacBook Pro.

Happily, Apple retains a 16:10 aspect ratio, which means you get a little more vertical screen space compared to the majority of Windows laptops that have 16:9 widescreens. It’s a particularly important point on Macs given that the ever-present taskbar encroaches on the useable space somewhat. 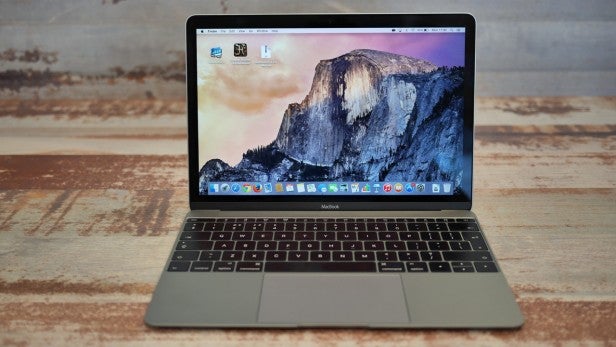 Obviously it’s a sharp screen, but it’s also rich and colourful. Contrast is right up there with the best LCD screens on laptops, producing pleasingly deep, inky blacks with no irritating light bleed around the edges. Videos and photos look great.

Like many top-end screens there’s no “air gap” in the screen assembly, which helps reduce reflections – I had no problems using the MacBook in our brightly lit office. It’s not the very brightest screen around, though, which means it still struggles in direct sunlight – a couple more notches in its range would make all the difference. 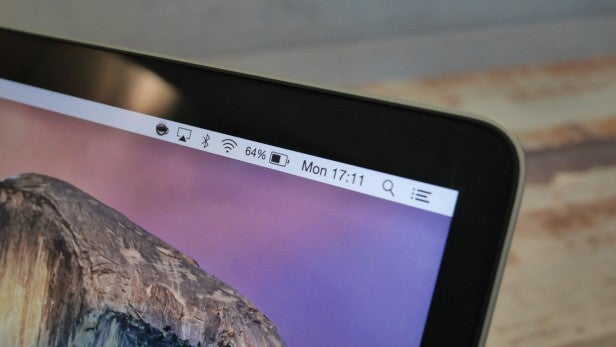 But this doesn’t take the sheen off what’s a great screen that’s supported by some surprisingly good stereo speakers. They aren’t quite as good as those on the 13-inch MacBook, but there’s a pleasing clarity to dialogue and vocals, and enough mid-range that they don’t sound hollow or tinny. They’re better for TV and video than music, but they’re very good for a small laptop and they reach a decent top volume.

An inevitable compromise of any thin and light laptop is reduced performance, and the MacBook isn’t immune to this. It’s the latest to use Intel’s new Core M processors, which are primarily designed to be efficient rather than blisteringly fast. They make the MacBook possible, but they come with caveats.

General everyday performance is excellent. You’ll have no problems with normal productivity and web browsing, even if you leave lots of tabs open at the same time. There’s 8GB RAM as standard, which is more than ample – as is the standard 256GB of flash storage.

Speaking of which, it’s the PCI-e flash storage that helps keep the MacBook so responsive and useable. It’s blisteringly fast – the Blackmagic Disk Speed Test measured it at 741MB/s read and  and 405MB/s write. You’ll notice this most when opening applications or waking from sleep – it wakes as fast as an iPhone or iPad does.

Related: Intel Core M: Everything you need to know 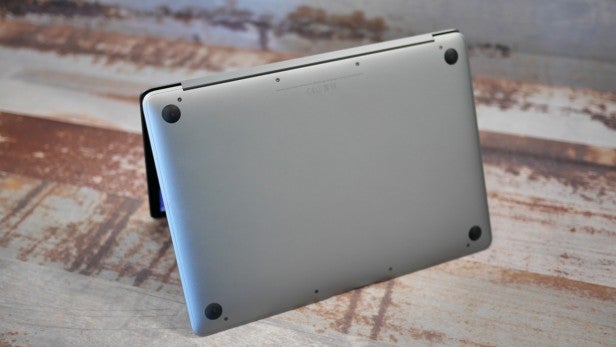 This makes up for the slightly sluggish Intel Core M processor, which scores 4,502 in Geekbench 3. This makes it slightly faster than the Asus Zenbook UX305 (4,098) – another Core M laptop – but not to a significant degree, and about the same as the 2011 version Core i5 MacBook Airs.

Spun another way, the MacBook is 26% slower than the current entry-level MacBook Air. This doesn’t show during general use, but you notice it more when tackling chunkier tasks such as batch image and video editing. The MacBook is fine for light editing duties, but only in extremis. It’s a similar story for gaming – only basic 3D games need apply, but that’s predictable enough.

What you lose in performance you gain in peace and quiet. The MacBook is fanless and never gets noticeably warm, a point that’s easy to overlook. In general use you probably won’t notice the difference in performance between a MacBook Air and the MacBook, but you will appreciate that it’s totally silent 100% of the time.

Used as our main laptop for the review period
Tested for at least a week
Used consistent benchmarks for fair comparisons with other laptops
Reviewed using respected industry benchmarks and real world use
Previous
MacBook (12-inch, 2015) Review Next
MacBook 2015 – Battery Life and conclusion Review