OPINION: Last week Google released another standalone YouTube app in the form of YouTube Music. It offers the entire catalogue in audio and video mode, ad-supported or through Red subscriptions. It looks like the total package, but can it match up to Spotify and the likes of Apple Music? We spent a few days with the app in order to find out…

For all the talk of Apple Music, Tidal, Spotify, Pandora and all of the other music streaming services out there, more people get their music from YouTube than all of the others combined.

Figures in June 2015 claimed 57 per cent of the total 135.2 billion total worldwide streams were provided by YouTube and the harsh truth for the chasing pack is that YouTube is growing fastest.

So, enter YouTube Music, a dedicated app that only serves music. If Google can make listening seamless and convenient then that impressive market share will only grow.

The YouTube Music app also works hand in hand with YouTube Red, the company’s new $12.99 a month service which removes ads and offers offline playback. Subscribers also get to switch to an audio-only mode in YouTube Music as well as full access to Google Play Music app access.

Everyone who signs into their Google account gets to sample the YouTube Red edition, so lets have a look at it… 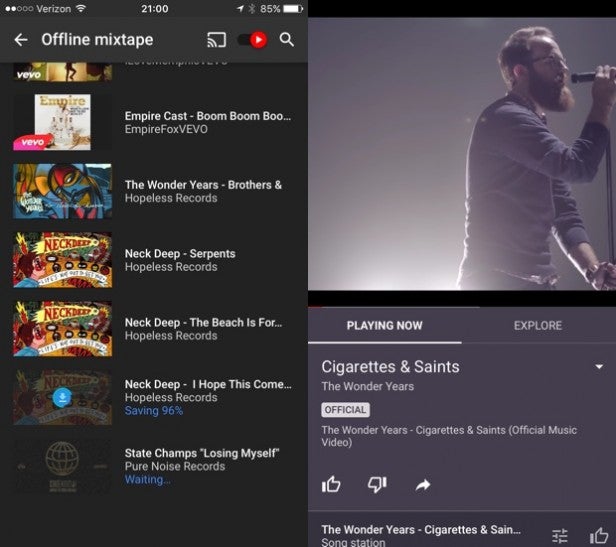 YouTube Music strips everything back to a music-focused interface and it works really well. Content is easy to find, with search results split neatly into artists, songs, albums, videos and stations.

If you select an album, it’ll play in order as it would in any other service. If there’s an official music video this will play, but album artwork will appear in the background on others.

The Playing Now Screen features all of the usual controls as well as the ability to up/down vote a particular song. Liking will add it to the dedicated tab within the app, while a thumbs down will help Google with its recommendations.

It’s also worth mentioning the app is identical on iOS and Android. 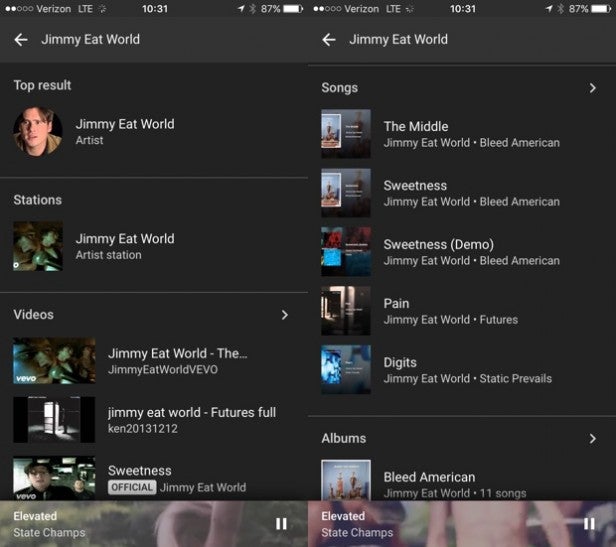 In terms of the pure playback experience, sometimes it feels like the video thumbnails and additional content feels like it gets in the way a little bit. Sometimes you just want a written list of tracks on a single page, like looking at the back of a CD, where you can see which song you want to hear next and can just tap it.

I suppose there’s always the Google Play Music app for that (bundled in with YouTube Red subscriptions), but who wants to use two apps? Perhaps Google will consolidate the two apps in future versions, allowing an easy switch between the two interfaces.

Related: Why one man won’t be sticking with Apple Music 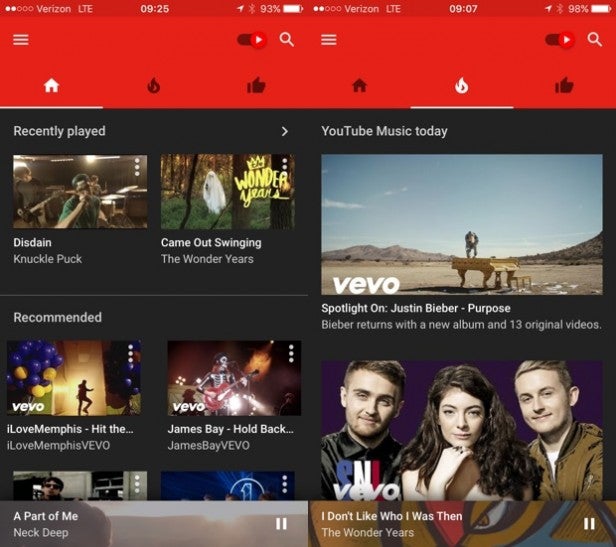 Both Google and Spotify offer access to gigantic content libraries, but I found YouTube Music is able to one-up competitors in a couple of interesting ways.

First of all there is the ability to choose between the music video and the direct audio stream. Now, few folks are going to watch music videos on their mobile devices for hours on end, but it’s a nice option if you want to watch the odd video, or perhaps Cast to your television set.

I really enjoyed the ability to just toggle a switch between video and audio (Red subscribers only), depending on my situation. If you’re in audio mode a quick toggle of the switch will take you straight to that point in the video without blinking. It’s all rather seamless.

The second key differentiator is the depth of the content available beyond official recordings.

While Spotify and Apple Music might have the odd live album released by an artists’ label, YouTube Music brings offers those alongside fan-shot videos from concerts, rare acoustic recordings, professional concert videos bands or fans have posted, videos with accompanying lyrics. There’s even quick access to interesting covers versions from YouTube uploaders and other artists.

These all sit in the Explore section, which can be accessed when playing any song. You can get some really deep cuts this way and continuing to Explore has a knock on effect that takes you on some really interesting musical journeys.

For example, a search for Green Day’s Dookie also brought me a 40-minute video of the band playing it live, in full at Reading 2013. And, hell, I didn’t know Alanis Morissette had covered Basket Case back on Jimmy Kimmel back in 2012! It wasn’t that bad either.

To help you know what’s what, there’s a clear marker for ‘Official’ ‘Fan’ made videos, etc. 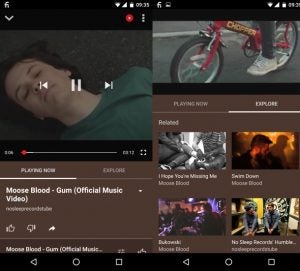 Apple has recruited a huge team of editors to created personalised recommendations within Apple Music, and they do a pretty good job.

Spotify takes the algorithmic route and Discover Weekly has been an extremely present surprise I look forward to every week. 55 bands I’ve discovered through that feature now sit in their own playlist. Can YouTube Red really match that level of engagement?

We’ve already mentioned the Explore feature sits next to the Now Playing Tab and how that brings new music into play. However recommendations also feature on the Home tab.

I’ve only been listening for a few days, but my stuff is slowly replacing the default popular content, as you’d expect. It’s an unfair comparison though, has Spotify has about 7 years of data on my listening habits (that’s not to say Google doesn’t, in other ways though!)

Unlike Apple Music, the YouTube Music app doesn’t require you to select your favourite genres or bands to glean knowledge about your tastes, so it’ll take a little time.

Like any self-respecting music streaming service, you’ll need a premium subscription to save music offline. In this case the subscription service is YouTube Red.

The signature feature here for Red subscribers is Offline Mixtape. It is a feature designed to come into its own the more you listen, rewarding you by providing a a ‘go-to’ playlist based on your preferences without the need to be connected or to use data. Pretty nifty, huh?

I enabled the feature on day one and got the most popular content from the likes of Adele, Drake and Bieber, but thankfully they were soon expunged by music I like and had listened to.

I suppose the closest thing Spotify has to this is the Discover Weekly playlist, which is more centred around stuff you’re not listening to that you’d like than simply amassing your favourite content. I like both features to be honest.

However, a weird little anomaly of the new YouTube Music account is the inability to save music of your choosing offline. This feature is present for Red subscribers in the main app and YouTube Gaming, so it seems like something Google will add at some point.

Remember, with a YouTube Red subscription, you also get full access to Play Music, so you can store regular offline playlists using this app if you’d prefer. 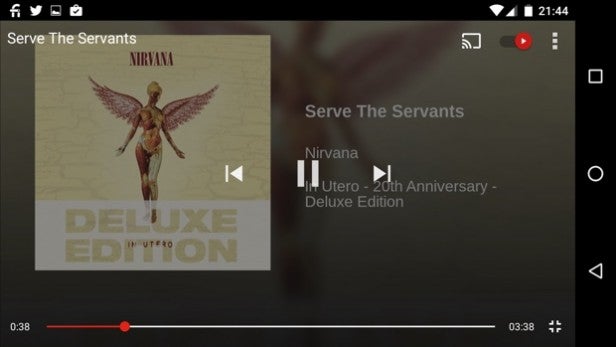 This is something I’d come to take for granted as a listener to every single music app I’ve ever used. Except YouTube. Click the Home button and playback ceases.

Thankfully YouTube Music fixes this ill, but only if you’re a YouTube Red subscriber. If you’re unwilling to hand over the monthly spondoolies then you’ll have to stay within the app to enjoy that video… and there’ll be loads of ads to content with.

Speaking of background play, you can exit video playback and return to the listing and the title bar at the foot of the screen will showing the a portion of the video playing along. It’s a nice little touch.

Without a paid subscription, YouTube Music isn’t that endearing. Most of the content will be prefaced by ads and there’s no background listening, but Explore really is an excellent feature that allows you to delve in more deeply and take some satisfying yet unexpected turns.

However, with YouTube Red it becomes an entirely different beast and one that’s perfectly capable of matching Spotify. With the offline access, the audio-only mode and background listening YouTube Music is a compelling proposition.

If you don’t like using the YouTube Music app as much as you do a more traditional clutter-free streaming service like Spotify or Apple Music, remember Red subscribers get full access to Google Play Music All Access, which instantly becomes a far more attractive service with the introduction of YouTube Red.

Ad-free everything and offline storage across the platforms really adds to the value proposition.

Add everything up and you’ve got something that’s going to legitimately compete with Spotify for my monthly music budget. Actually cutting the chord and making that switch is a different matter though. Perhaps you’ll find it easier?