The search giant appears to have chosen the same font used by those Chinese factories that churn out millions of foam letters for children to play with in the bath.

Still, at least there was some conviction behind this alteration. Last year Google made a change that involved a slight repositioning of the “e”. Or was it the “g”? Could’ve been the “l”. Meh, no one really gave a crap because we couldn’t even tell the difference.

Google may have (or did have) one of the most recognisable logos in history, but it’s not the only one to make a cock-up on the rebranding front. Here’s a look at some of the worst logo redesigns in recent history… 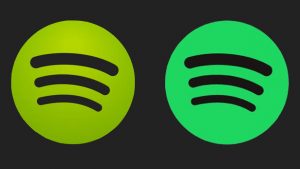 Earlier this year, Twitter got its tweets in a twist over Spotify’s new hue for its iOS app icon. Nothing much else was altered; just the green. Fair enough if the streaming service fancied a change. Shame that, of all the many greens – and there are forests full of the bloody things – Spotify chose easily the worst green.

OK, we get that this was probably a statement of tech evolution. The old iTunes logo featured a CD, and iTunes evolved from a piece of music-management software into a digital music store that aimed to kill off physical media. Trouble is, we quite liked the old logo. It had character. The new logo is just so dull.

The logo for the London 2012 Olympics bid was far from inspiring or original, but by golly it was prettier than the hideous, angular atrocity that was chosen for the main event. It looked like someone had grated chunks off Bertie Bassett. The only reason it gained any kind of acceptance was because no one was allowed to be negative once London 2012 finally arrived – the air was filled with so much tangible goodwill that it massaged our faces into giddy grins throughout one of the greatest sporting shows the world has ever seen. The logo could’ve featured a bulldog squatting over its own excrement and we’d still have shrugged and gone flailing our arms around, shouting “Woohoo! OLYMPICS YEAH!”

Was there any real need to change the Animal Planet logo? Perhaps it was looking a little dated, and the 3D Earth against the flatness of the rest of the logo jarred, but surely a small tweak was all that was needed. The awful update features an unnecessary number of greens, squished letters and an M lying awkwardly on its side to give the impression of tiger stripes – or zebra stripes, who knows? – but that just draws the eye away from reading the brand name. Not so grrr-eat. Should’ve been caught by natural selection.

You could argue that the colours are what make the eBay logo instantly recognisable, and who cares about the typography? You’d be wrong, of course. Recognisability and good design, like same-sex couples in civilised countries, are allowed to go hand in hand. The old eBay logo was fun and distinctive; the new logo is just a word typed out in what happen to be the same four different colours. If we were eBay, we’d be feeling buyer’s remorse over this one.

Eh? The Sci-Fi Channel didn’t just change its logo; it changed the spelling of its name. It’s like a teenager who spends years in a strop over his cretinous conformist parents choosing to Christen him with a conformist name like Richard and dreams of having a more badass name – Trent, Blaze or Darth, something like that – but then never grows out of the idea and actually gets it changed by deed poll. Yep, Syfy is the equivalent of Blaze Wilkins, except with an even more childish signature.

Internet Explorer is dead, long live Edge! So if Microsoft wanted to banish years of ridicule over its buggy browser, why did it make the logo for the shiny new Edge browser so bloody similar to Explorer’s well-known motif? Perhaps it was so that all those hordes of Luddites who never worked out that there was any alternative to IE would still be able to find where the internet was when they finally figured out how to upgrade to Windows 10 – which was by getting one of their children round to do it for them, most probably. Still, it was a logo redesign showing minimal effort, and the loss of the planetary ring makes it seem somehow less internet-y. Hardly a cutting-edge logo for Edge.

Last year Netflix incurred the wrath of streaming fans everywhere by erasing its old red logo, with its old-school theatre flair, practically reeking of popcorn and sex in Studebakers at the Drive-Thru. The new version was more like a grubby VHS rental store by comparison. With that red text on a pale background, it also looked just a little too like the logo for Dexter. Rewind, please.

Did we miss any that really made your blood boil and retinas sting? Let us know in the comments section below.