Each week, we’ll be bringing you our pick of the best crowdfunding campaigns around, so you know which ones to consider backing – and which ones to definitely avoid.

This week’s top project is a very smart bag that lets photographers access their camera without taking it off their back. And our one to avoid? A ‘mood-setter’ that’s guaranteed to kill any chance you might have of romance.

The Wolffepack Capture is a camera bag unlike any other we’re aware of. It sits on your back (and looks) like a backpack, but swings around to your front, so you can take your camera out and start shooting in seconds.

It uses the same award-winning swing mechanism as Wolffepack’s other bags, but this one is made especially for photographers. This means it has a custom padded pod for protecting a DSLR plus lenses and accessories. You can also take this out and carry it separately, if you like, or put it in a different bag if you’re getting on a plane, say. 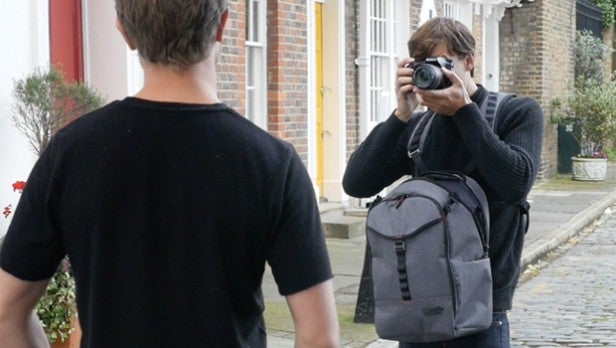 Because it makes it so much easier to start taking photos. There’s no need to take the bag off and put it down, so you’ll scarcely miss an opportunity to grab a fleeting snap.

Nor do you have to worry about it getting muddy or dusty or wet, which instantly increases the number of places you can shoot – you could be wading knee-deep in a river or ocean with this bit of kit.

When it flips around, the bag sits on your hi but stays securely attached to, making it easy to reach in and grab additional gear like lenses. Plus, it reduces the chances of pickpockets pilfering your valuable belongings. 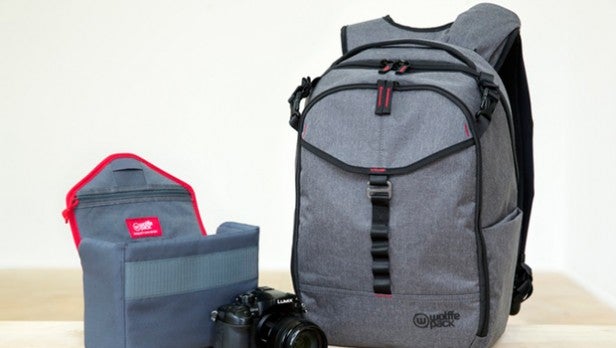 It’s also highly customisable. The internal dividing shelf can be unzipped and folded flat, creating three separate carry modes – you can have the DSLR pod in the top or bottom section of the bag, or make one large space and just chuck everything in together. You decide.

Thanks to the split-level design, you won’t have to go rummaging through the bag to find what’s at the bottom. Instead, just unzip the other zip, and you have instant access to the bottom of the bag. As well as your camera gear, those loose socks and pen lids will be easier to access than ever, too!

So what else does it have? There’s a padded, microfibre-lined sleeve for laptops up to 15-inch, plus a waterproof cover that sits in a hidden pocket, an adjustable chest strap that you can remove if you like, and a sculpted and padded airflow back system to stop your back from sweating. Which will come in very handy in hot weather.

The firm behind it took to Kickstarter back in 2014 to fund its first backpack using the same system, so you’d hope it’d have most of the challenges covered. It currently sells two different styles on its website – the Metro and the Escape. The main difference between these and the Capture is the addition of the camera pod, so there’s no reason to think this won’t be up to the standard of its predecessors.

The firm also claims that working prototypes have been in testing for several months and have passed threshold tests, with the design now ready for production. 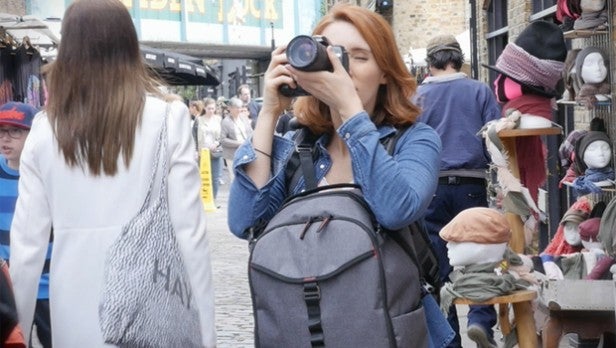 Not really. Dedicated camera bags are made to be slung over one shoulder, which is bad for your back. (Plus it advertises to thieves that you’re lugging around a pricey DSLR.) Normal backpacks, in turn, don’t have anywhere near the same functionality.

So the Capture could really, er, capture photographers’ imaginations.

If you like taking photos with a proper DSLR and are fed up with having to take your bag off to get your camera, then yes. Even if you never realised it was an issue, chances are it’s because you didn’t know there was a way around it. The Capture could solve a problem that you’ve been putting up with for decades.

Pledge £35 and you’ll get just the pod camera holder, while £99 gets you the Capture but without the pod. If you want the full Capture and pod combo, you need to pledge £125 – all the £115 Early Bird offers are sold out.

It’s certainly not cheap. But it depends how seriously you value the ability to take photos at a moment’s notice with minimal hassle.

There’s also a prestige package (£1,100) that gets you an invite to the London launch event, two bags, a signed certificate and a tour of the Wolffepack HQ.

To be honest, that’s for the fanboys only. 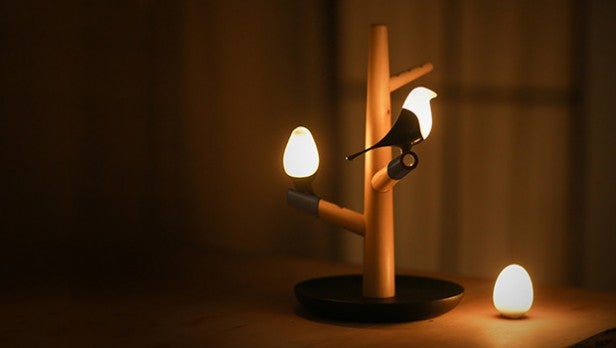 That thing. Maglamp. Or, to give it its full name, “the Maglamp romance lamp for lover!” It’s described as “poetic decoration for your life,” but is basically a set of novelty-shaped lights on a piece of plastic cut to look like a tree.

The tree charges the magpie-shaped lights, which can then be placed anywhere else in the house. Though why you’d want to do that is anyone’s guess. Seriously, it makes Argos Value range lamps look classy.

If you go back to someone’s place and they use this to set the mood for loving, take our advice and scarper.

Would you crowdfund the Wolffepack Capture? Seen any other cool Kickstarter or Indiegogo campaigns of late? Let us know in the comments below.